Nasogastric tube (NGT) insertion is one of the most common procedures in the Emergency Department (EDs).

This study aimed to evaluate the ease of NGT installation using the conventional method and the SORT method.

There was no significant difference between the two groups in terms of age, body mass index, sex, and history of NGT use. However, the mean patient satisfaction score was higher (P < 0.05), whereas the mean pain score was lower (P < 0.05) in the group receiving the conventional method compared to the other group. Moreover, there was no statistically significant difference in complications (P > 0.05).

The nasogastric tube (NGT) is a flexible tube that enters the nose, esophagus, and, ultimately, the stomach (1, 2). The purpose of this procedure is usually to routinely discharge the stomach, irrigate the stomach, reduce the chance of nausea and vomiting, reduce the likelihood of pulmonary aspiration and pneumonia, and others based on indications (3, 4). NGT can be associated with complications such as sore throat, nausea, vomiting, esophageal rupture, and rare complications such as gastric pneumatosis. On the other hand, the benefits, and indeed, the reasons for the usual placement, are not fully proven empirically and practically (5).

It has been shown that NGT insertion during or after surgery increases the esophageal-gastric reflux recurrence, and even, its duration (6, 7). Mandal showed that reverse Sellick’s maneuver with neck flexion, lateral neck pressure, and guided-wire techniques were better options than the conventional method in intubated patients (8). In the study of Illias et al., neck flexion, lateral neck pressure, and thyroid cartilage elevation were highly successful (9). Moreover, Tsai et al. introduced the stylet-guided method (Rusch) with high success and confidence rate for NGT insertion in unconscious patients (10).

To reduce complications of NGT embedding, Najafi proposed a new method of nasogastric tube insertion, called SORT, which has four steps (sniffing position, NGT orientation, contralateral rotation, and twisting motion). In the sniffing position, NGT enters the nose and pharynx. At the moment of entry into the esophagus, the patient’s head is rotated 45 degrees opposite the nostril used to insert NGT. The piriform sinus is simultaneously compressed on the same side of the tube insertion. The tube is then directed to the esophagus and stomach (11).

Since nasogastric tube insertion is one of the most common procedures in emergencies, and one of its major complications is pain during implantation, the use of more convenient implantation methods appears reasonable.

This randomized clinical trial was performed at the EDs of two university hospitals (Imam Reza (AS) and Sina hospitals affiliated to the university of medical sciences) during Mar-Sep 2019. Due to the lack of a similar study and the prevalence of patients, we randomly included 200 patients in two groups, each with 100 patients, according to the randomized allocation software.

3.2. Setting and Selection of Participants

The sampling method was convenience sampling until the completion of the sample collection procedure. The inclusion criterion was conscious patients with GCS 15 over the age of 18 years who required NGT insertion based on diagnostic and treatment goals. Moreover, the exclusion criteria were patients with cervical spine problems who were unable to perform neck movements (both passive and active) and lack of consent to participate in the study. The flow diagram of the study is shown in Figure 1. 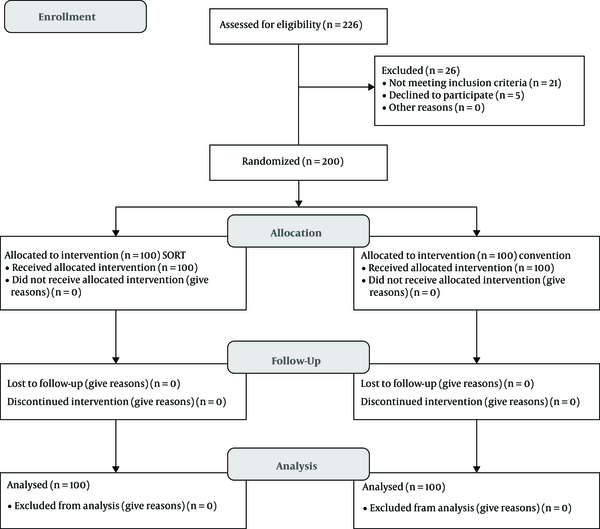 The flow diagram of the study

The study was approved by the Ethics Committee of Tabriz University of Medical Sciences under the code IR.TBZMED.REC.1397222. It was also registered on the Iranian clinical trial database with the code IRCT20130224012592N5.

All the patients were enrolled in the study based on the inclusion and exclusion criteria. The patients completed informed consent forms before participating in the study. Before conducting the experiment, data including age, sex, body mass index (BMI), vital signs, current illness, the reason for NGT insertion, NGT size used, and previous history of NGT insertion were registered. The patients were assigned to two groups of 100 patients, each using a randomized block design.

The procedure was based on a standard protocol in the control group. After consuming topical analgesic drugs such as lidocaine, NGT entered the nostril, and after reaching the oropharynx, the patients were asked to drink some water and help with NGT ingestion (12). In the intervention group, the SORT method (NGT orientation, contralateral rotation, and twisting motion) was performed.

All the data were entered into SPSS 17.0 and analyzed. The normal distribution of the data was evaluated using a Kolmogorov-Smirnov test, and then, descriptive statistics (mean ± SD), frequency, and percentage were used to describe the samples. Moreover, a chi-square test (qualitative variables) and an independent sample’s t test (quantitative data) were used to compare the two groups. A P value of less than 0.05 was considered significant.

The comparison of the demographic features and the history variables between the two groups is shown in Table 1. According to this table, there were no significant differences between the groups in terms of these variables.

Table 1. The Comparison of the Demographic Features and the History Variables Between the Two Groups

Table 2. Comparison of the Study Groups in Terms of Pain and Patient Satisfaction Level Based on Primary Diagnosis

Table 3. Comparison of the Study Groups in Terms of Pain, Patient Satisfaction Level, and Incidence of Complications

This study aimed to evaluate the ease of NGT insertion using the conventional and SORT methods. To this end, two groups of 100 patients were evaluated. No significant difference was observed between the two groups with regard to the demographic features and the history variables. However, the satisfaction level and pain severity scores were significantly higher in the group receiving the conventional method than in the other group; however, the complication rate was not significantly different.

Most studies compared different NGT insertion methods in unconscious or intubated patients, and only a low number of them compared the methods in conscious patients. Illias et al. compared methods of neck flexion with lateral pressure and elevated thyroid cartilage techniques and reported them to be highly successful. However, the time required for NGT insertion was shorter in the group treated with thyroid cartilage lifting compared to the other group (9). Uri et al. studied the effect of lidocaine gel on NGT insertion and showed that the use of lidocaine gel 5 minutes before the procedure could improve pain relief and patient cooperation (13). A meta-analysis study showed that nebulized lidocaine could reduce 57.7% of patients’ pain during NGT insertion (14).

In 2016, Najafi et al. introduced the SORT maneuver for NGT insertion. The maneuver was successfully performed for a 61-year-old intubated patient, and the authors recommended conducting clinical trials to compare the maneuver with other methods (11). In the studies of Ann et al. (2013), Appukutty and Shroff (15), Mandal et al. (8), and Tsai et al. (10), different methods of NGT insertion were compared with the conventional method in unconscious or intubated patients, and the new methods proved to have advantages over the conventional method (9, 16).

Our study results did not show any significant difference between the SORT maneuver and the conventional method. It is concluded that in conscious patients with active GAG reflexes, the use of the SORT maneuver increases pain and decreases patient satisfaction. Results of a clinical trial in 2016 showed that using a non-swallow method for NGT insertion in conscious patients produced better results, i.e., less pain and more satisfaction (17). However, in the present study, the conventional method showed better results than the SORT method, including sniffing position, NGT orientation, contralateral rotation, and twisting motion. It appears that performing these movements in conscious patients causes more discomfort and pain.

We would like to appreciate all the participants for their patience. This article was written based on the dataset of the first author’s thesis entitled “Comparison of the feasibility of nasogastric tube insertion in conventional and SORT method”, registered in our University of Medical Sciences (the code 57817, Apr 04, 2017).