Relationship Between Selenium Trace and Patient Outcome After Open-Heart Surgery

Acute stress response to heart surgery can cause major morbidity in patients. The trace of selenium is useful for preventing heart damage. Although the trend of selenium changes is of high importance for body balance, the usefulness of routine use and effectiveness of this element for patients under open-heart surgery is still unclear.

This study aimed at assessing serum selenium level before and after open-heart surgery and the relationship between selenium trace and patient outcome.

This prospective analytical study was performed on 100 patients undergoing open-heart surgery using cardiopulmonary bypass (CPB). In all patients, the serum level was measured at a predetermined time (before surgery and one and two days after surgery). Then, the relationship between serum selenium and patient outcome was assessed.

Based on this study’s results, a low level of selenium can affect patients’ outcomes after open-heart surgery.

Open heart surgery can trigger the inflammatory reaction and release cortisol, catecholamine, and other stress hormones (1). Period of ischemia and reperfusion can be related to the onset of the inflammatory response and followed by heart injury (2, 3). Based on previous studies, the impact of stress oxidative on the occurrence of multiple organ dysfunction after surgery and perioperative mortality has been confirmed and still remains as a challenging unsolved problem (1, 4). Based on some evidence, selenium is one of the important elements for optimal heart functions and preventing heart injury (5-7).

The protective effects of selenium during oxidative stress have been shown (8-12). In some experimental studies, selenium supplementation could decrease postoperative complications after cardiac surgery and affected the stress oxidative process (9, 13). On the other hand, reduced selenium intake is a risk factor for an increase in mortality rate in patients with coronary heart disease and sepsis after surgery (14, 15). Stoppe et al. showed that decreased selenium levels after open-heart surgery can cause organ failure (16).

This study was done to assess serum selenium level before and after open-heart surgery and the relationship between selenium trace and the patient’s outcome.

This study was approved by the Ethics Committee of Mazandaran University of Medical Sciences (IR.Mazums.Rec.1395.2468). The study was conducted in the referral heart center in Northern Iran from December 2017 to September 2018.

In this study, 100 patients undergoing elective open cardiac surgery using cardiopulmonary bypass (CPB), aged between 20 - 75 years, ASA class II and III, and hemodynamic stability (MAP > 50 & HR 50 - 110) were studied. The sample size was calculated according to the Cohen formula with an effect size of 0.5 and the power of 80%. Patients with a history of previous heart surgery, heart failure (EF < 40%), myocardial infarction after surgery, liver dysfunction, kidney failure, thyroid diseases, pregnant cases, those needed pace emergency operations and surgery again were excluded from the study.

CPB was performed in moderate hypothermia (28ºC - 32ºC) on a conventional CPB circuit. To induce cardiac arrest, antegrade infusion of the cold crystalloid cardioplegic solution was injected into the coronary arteries. An initial dose of 300 ug/kg of heparin was administrated and, at the end of the surgery, reversed by protamine.

Venous samples were obtained from all patients at three determined time points (before surgery and one and two days after surgery) at room temperature in EDTA tubes. The samples were centrifuged at 3000 rpm for 10 min. The level of selenium trace was measured using the Gas Chromatography-Mass Spectrometry method (iCap 6000; ICP- OES by Thermo, UK). The normal selenium range considered 100 - 140 µg/L. The laboratory team was unaware of the patients’ previous history, health status, and surgery plans.

Also, the duration of hospital stay, intensive care unit (ICU) stay, mechanical ventilation, and surgery were assessed and recorded before surgery and one and two days after surgery. The care provider team was unaware of the selenium levels of the patients throughout the postoperative period. Diagnostic and therapeutic decisions were made based on the clinical routine.

Data were statistically analyzed using SPSS 24 (SPSS Inc., Chicago, IL). Descriptive and correlation tests were used for analyzing data. In all cases, a level of P < 0.05 was considered statistically significant.

Table 2. Relationship Between Level of Selenium and Clinical Outcome 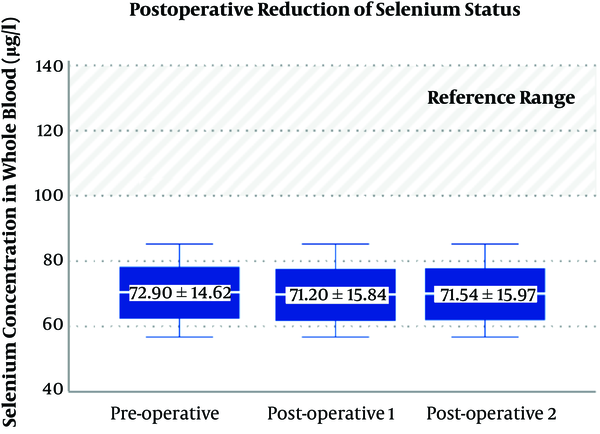 The results of the present study showed that serum selenium levels could affect patients’ outcomes after open-heart surgery. Serum selenium levels were inversely and significantly associated with age, duration of hospitalization, duration of CPB, and duration of surgery. Based on some studies, selenium is an important trace element in the body. Its effect on defense mechanisms against oxidative stress has been reported, and a decrease in its level after cardiac surgery can increase postoperative complications (17-19) is consistent with our results.

The findings of this study indicated that the difference in the trend of serum selenium level before and after surgery was not significant. However, considering the normal range of selenium (100 - 140 µg/L) (3, 16), patients in this study had a selenium level below the normal range on admission and after surgery. In some studies, the selenium level in ischemic heart disease patients was low before surgery that can affect the outcome after surgery (18, 20, 21). Also, evidence-based studies showed that a reduction in selenium concentration after heart surgery can be related to the severity of illness and increased stress oxidative (22, 23). In a study, cardiac surgery with CPB profoundly decreased intraoperative whole-blood levels of antioxidant trace elements, such as selenium (11). However, in the present study, the level of selenium reduced one or two days after surgery, but it was not significant (P = 0.187).

Among evaluated outcomes after heart surgery, the level of selenium on admission was inversely related to ICU stay and duration of surgery. On the second day after surgery, selenium level showed an inverse relationship with CPB duration and surgery duration (total length of hospitalization), indicating that increasing surgery and CPB times can lead to a reduction in serum selenium levels. Stoppe et al. showed that selenium concentrations at the end of surgery were associated with postoperative inflammation and the length of ICU stay (11). However, Berger et al., in a clinical trial, reported that the length of ICU and hospital stay and infection were not related to the level of selenium, which is not consistent with our results (22). Both clinical and preclinical studies have shown an inverse association between the selenium level and the development of cardiovascular diseases (24).

Among the examined demographic and anthropometric variables, age showed a strong correlation with the blood selenium level. Koszta et al. indicated that participants’ age was correlated with the selenium level that is in line with our results (10).

Therefore, we suggest that serum selenium level can affect the patients’ outcome after open-heart surgery; however, whether selenium should be used in all patients is unclear. Measuring selenium level before the surgery can help to address this issue.

Based on the results of the present study, the low level of selenium can affect the duration of hospitalization, CPB, and surgery. Therefore, serum selenium level should be routinely measured before cardiac surgery, and selenium supplement should be prescribed if needed. However, more studies are needed to evaluate this recommendation.

We wish to thank all patients who participated in this study. The staff of the Fatima Zahra Hospital, Sari is gratefully acknowledged for their assistance in conducting the study.