Following surgery, patients frequently suffer from shivering, and this can lead to postoperative complications and discomfort.

This study aimed to compare the effect of ketamine on patients’ shivering following an elective abdominal hysterectomy. Patients were given either Ketamine (0.25 mg or 0.5 mg/kg) or a placebo. The study and surgery took place in a subspecialty University Hospital for Gynecology and Obstetrics.

This study was an interventional, randomized, controlled clinical trial. Ninety-six women who underwent elective abdominal hysterectomy were randomly assigned to three groups. Ketamine was administered to all participants 20 min prior to the end of surgery. The first group received 0.25 mg/kg of intravenous ketamine. The second group received 0.5 mg/kg intravenous ketamine. The third group received a placebo of intravenous saline. Postoperative shivering, sedation grade, hallucination, nausea, vomiting, and nystagmus were measured for each patient up to 30 minutes.

The study showed that patients suffered from less shivering in the two groups that received ketamine. The reduced shivering was seen 5, 10, and 20 min following surgery in the two groups that were given two doses of 0.25 and 0.5 mg/kg ketamine compared to the control group (P value < 0.05). There was a significant difference between patients receiving normal saline and those having 0.25 and 0.5 mg/kg of ketamine in the rate of sedation grade, nausea, vomiting, and nystagmus (P value < 0.05). The main differences in patients receiving ketamine were the sedation grade at zero time and postoperative hallucination experienced by those patients who received 0.5 mg/kg of ketamine.

Ketamine reduced shivering in all patients following elective abdominal hysterectomy. This was regardless of dose. Patients were less likely to suffer from hallucinations and sedation grade with a lower dose of ketamine (0.25 mg/kg compared to 0.50 mg/kg).

Cesarean section is the most commonly performed gynecological surgery, followed by hysterectomy (1). Patients frequently suffer from shivering following surgery. The shivering experienced by the patients may be a natural, thermal regulatory response to central hypothermia or as a result of the release of cytokines during the surgical process (2, 3). This is unpleasant and occurs following surgery in 30-65% of patients who have received general anesthetics (4).

Postoperative shivering increases metabolism and oxygen consumption in patients by up to 400 times (5). Patients then suffer from acidosis due to the increased production of Carbon Dioxide (CO2). Shivering also causes arterial hypoxia and is associated with an increased risk to patients with myocardial infarction (6). The physiological stress that shivering causes can lead to an increase in cardiac output, plasma catecholamines, as well as intracranial and intraocular pressures (6, 7).

Shivering is an involuntary oscillatory mechanical movement. It interferes with blood pressure, electro-cardio graph (ECG), and pulse oximetry measurements. It is also unpleasant and uncomfortable for patients (6, 7). Shivering, which causes the muscles to stretch around the surgical incision, can increase postoperative pain (2).

A variety of medications have been used to prevent or treat post-anesthesia shivering (8). Recent studies have shown that ketamine can prevent postoperative shivering (6). Ketamine is a competitive N-methyl-D-aspartate (NMDA) receptor, antagonist. It is involved in the regulation of heat. In rats, NMDA agonist increases the rate of neuronal discharge in the anterior hypothalamic preoptic region. The NMDA receptors act by modulating serotonergic and noradrenergic neurons in the locus ceruleus (9).

Ketamine probably regulates shivering by producing non-vibration-induced heat, acting on the hypothalamus and beta-adrenergic effects (10). Several studies have shown that ketamine is effective as a prophylactic drug for postoperative shivering (11-17). To reduce shivering, a dose of 0.5-0.75 mg/kg of ketamine is used, but this dose may lead to sedation, delirium, and hallucinations (6). The side effects are transient and disappear within one hour (18).

This study was a double-blind, randomized clinical trial. Ninety-six women undergoing elective abdominal hysterectomy were involved. The women were treated at Yas Hospital, Tehran University of Medical Sciences, from May 2019 to September 2019. This study was registered in the Clinical Trial Registry Database with IRCT No. 20190409043219N1 and approved by the Ethics and Clinical Studies Committee of Tehran University of Medical Sciences, with No. 1396, 4120.IR.TUMS.MEDICINE.REC.

The inclusion criteria were women aged between 35-65 years and ASA-PS classes I and II. Women were excluded if their surgery lasted more than 3 hours, they needed additional surgery, they experienced unusual bleeding, they needed either an intra-operative transfusion or one up to 4 hours later, and they had a history of having used a hypnotic drug within the last 72 hours.

The person who injected the drug and the patient was blind to the type of drug being administered and the patient’s group allocation. Standard anesthesia and procedures were undertaken during surgery by trained and competent staff. All equipment and medications were checked and were approved for use. Fentanyl 2 μg/kg was given to the patient first, and then 2 mg of midazolam was injected. Induction was undertaken using 2 mg/kg propofol and 0.5 mg/kg atracurium.

Once intubated, the patients remained anesthetized with a mixture of 1-1.5 MAC isoflurane in %100 oxygen, fentanyl, and atracurium were re-administered when needed. At all times, the patients were monitored in terms of non-invasive ECG, blood pressure (BP), temperature, pulse, and oxygen saturation (SpO2). The operating room temperature remained constant at all times between 23-24°C. The patient’s temperature was taken using tympanic thermometers (Welch_allyn Braun_pro 6000 Tympanic Thermometers were used). Observations were taken before injection of the induction drugs, one hour after this, before the injection of any investigational drugs, at the start of the recovery, and subsequently, 10 and 30 min following surgery. Vital signs of the patient were maintained within 20% of their baseline values. Forced air warmer was used to warm the patient if their temperature dropped below 36°C.

Twenty minutes before the end of the surgery, an anesthesiologist who was not involved in the research prepared the drugs under investigation. The drugs were coded according to a randomization method. The drugs were then injected into the patient by another anesthesiologist who did not participate in the study. At the end of the operation, the drug-induced muscle paralysis was antagonized using a mixture of neostigmine and atropine in the recovery area. A suppository of diclofenac sodium (100 mg) was administered to all patients. For patients who were still in pain, and with a visual analog scale (VAS) score higher than 3 (out of 10), 2 mg of intravenous morphine was given.

All patients were assessed to see whether they were shivering by either the recovery nurse, whilst in recovery, or by the anesthesia assistant whilst on the ward. The checks were made 0, 5, 10, 15, 20, 30, 60, 120, and 240 min following surgery. None of the staff who monitored the patients knew which type of drug had been used in this study. The degree to which the patient was shivering was assessed at five levels. Level 0: No shivering, Level 1: slight shivering (some peripheral vasoconstriction but no visible shivering), Level 2: medium level shivering (muscular activity in one muscle group only), Level 3: severe shivering (muscular activity in more than one muscle group without generalized shivering) and Level 4: whole body or generalized shivering. If the patient suffered from severe shivering (Level 3), 25 mg of pethidine was injected intravenously by a nurse in the recovery room or ward, under the authority of the anesthesiologist.

The recovery nurse in the recovery room and the anesthesia assistant on the ward recorded simultaneously the presence or absence of sedation and its severity and their pethidine requirement. They also checked whether the patients’ suffered from hallucinations, nausea, vomiting, and nystagmus status. The level of sedation was evaluated on a 5-point Likert scale. Level 0: Alert, Level 1: aroused by voice, 2: aroused by verbal command, 3: aroused by vigorous tactile stimulation, and Level 4: No response to vigorous tactile stimulation.

The patient characteristics and duration of operation were not statistically different (P value > 0.05, Table 1). Likewise, the blood pressure or amount of fluid or fentanyl consumed (all P value > 0.05). There was a significant difference regarding the sedation grade in patients who received ketamine compared to the normal saline group (P value < 0.05) at 0, 15, and 30 min after the end of surgery (according to the Chi-square test). However, the difference between the two drug groups was not statistically significant, except for time zero (P value > 0.05, Table 2).

Table 1. The Characteristics of the Participants and Surgical Timea

Table 2. Comparison of Sedation Grade at Time 0, 15, and 30 Minutes After Drug Administration in the Study Groups

Table 4. Comparison of Nausea and Vomiting, Hallucination, and Nystagmus in the Three Study Groups 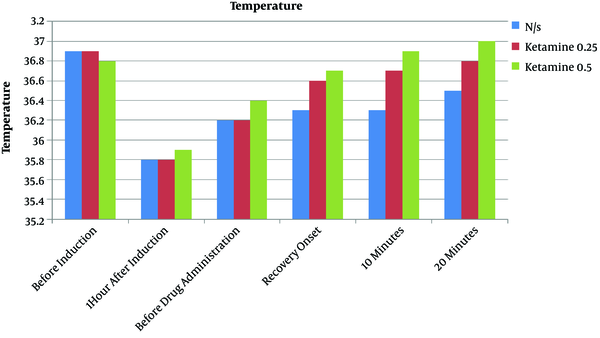 Between 5-65% of patients suffer from shivering following surgery due to anesthesia. Most of the general anesthetic agents alter our thermoregulation by decreasing our core temperature. Ketamine does this by increasing plasma norepinephrine and peripheral arteriolar constriction (5, 16), as we found the higher tympanic temperature in ketamine groups than those patients who received the placebo.

This study showed that ketamine, at both 0.25 mg/kg and 0.5 mg/kg, might reduce postoperative shivering after elective abdominal hysterectomy compared with the placebo. The difference between the two groups that received ketamine was not significant. There was a significant difference in the frequency of nausea, vomiting, and nystagmus between the two ketamine groups compared to the normal saline group. The study found that the lower concentration of ketamine (0.25 mg/kg) equated to a lower rate of hallucination and sedation scores compared with 0.5 mg/kg ketamine. The nystagmus status was similar in both ketamine groups.

The study by Mohtadi et al. showed that the prevalence of postoperative shivering was 5.1% in the ketamine group, 17.9% in the ondansetron group, and 71.8% in the saline group (17). Kose et al. investigated the efficacy and safety of ketamine at doses of 0.25 mg/kg and 0.5 mg/kg for the prevention of shivering in patients undergoing a cesarean section. The results showed that both doses were effective in the prevention of shivering. Sedation scores were significantly higher in the ketamine 0.5 mg/kg group (10).

In the study by Shakyu et al., a low dose of ketamine was shown to reduce shivering in patients after spinal anesthesia compared to those patients who received a placebo (6). This was consistent with the study by Ondansetron. Honarmand and Safavi's study compared the efficacy of low-dose and prophylactic midazolam with a placebo, ketamine, and a combination of ketamine and midazolam in preventing shivering caused by regional anesthesia. It showed that ketamine was more effective than the placebo and midazolam in reducing the amount of shivering in patients (9). These studies are in agreement with this study as all shown that the efficacy of ketamine was significantly higher than a placebo at treating postoperative patients’ shivering.

Gupta et al. showed that ketamine, alone and in combination with midazolam, was more effective than a placebo at preventing shivering for patients following spinal anesthesia (19). Kose et al. looked at the effect of ketamine on postoperative shivering. It showed that there is a relationship between a higher dose of ketamine and a higher sedation score (20). Our study also found a higher sedation score when 0.5 mg/kg ketamine was given to patients compared to 0.25 mg/kg.

Findings by Zhou et al. were not completely in line with this result. Their study found that nausea and vomiting in the ketamine groups were similar to the placebo group. That conflicts with our findings. They showed that there are more patients suffering from hallucination in the 0.5 mg/kg ketamine group compared with those who took a placebo or 0.25 mg/kg ketamine. Their results on the efficacy of ketamine in the reduction of postoperative shivering were similar to the findings of the current study (21). Factors affecting postoperative shivering, such as the type of surgery and the duration of the surgery, could be the reason why some of the studies do not concur. To address the variance, larger groups should be tested. In addition, this would be best done across multiple centers.

In conclusion, based on the results of this study, ketamine at both doses of 0.25 and 0.5 mg/kg is effective in reducing the amount of shivering suffered by patients following an elective abdominal hysterectomy. The use of the lower concentration of ketamine is recommended in elective abdominal hysterectomy as it has fewer complications, such as hallucination and sedation scores.