The purpose of this study was to evaluate the effect of intra-articular injection of fibrinogen on postoperative bleeding following total knee arthroplasty.

Intra-articular fibrinogen administration may reduce acute bleeding and can be used as an effective intervention to prevent further bleeding and the need for transfusion in patients undergoing total knee arthroplasty.

Total knee arthroplasty (TKA) is a common surgical procedure for the treatment of patients with severe arthritis. One of the complications of TKA is major bleeding, as 10 - 38% of patients would require blood transfusion (1). The volume of bleeding is sometimes 1,500 mL (800 - 1800) on average (2, 3). Postoperative bleeding can cause hematoma, pain, limitation of knee movement, and delayed wound healing. Also, reducing bleeding is important to maintain hemodynamic stability for the patient and reduce complications such as hemolytic and non-hemolytic reactions, acute injury, viral and bacterial infections, hypothermia, and coagulopathy (4). The Zhang et al. study demonstrated that after the release of the tourniquet, fibrinolysis is activated at the location, increasing the blood loss (5). Therefore, it is important to find a method to reduce bleeding during surgery (6).

Various methods can be effective in reducing perioperative hemorrhage, including intraoperative controlled hypotension, tourniquet use, intravenous and local use of anti-fibrinolytic drugs, fibrin sealants, and autologous platelet gels (7, 8). Fibrinogen is an anti-fibrinolytic agent that plays a key role in the formation, reinforcement, and strengthening of the clot (9). Fibrinogen is a plasma glycoprotein made by the liver, which is converted to fibrin and blood clots by thrombin enzymes following tissue and vascular injury. It is a substrate for thrombin, plasmin, and active factor XIII, with a half-life of three to five days (10). Hypofibrinogenemia occurs due to factors such as hemorrhage, hemodilution, consumption due to blood clotting, and Disseminated Intravascular Coagulation (DIC) (11). Thus, it is important to use fibrinogen to keep its blood concentration at the normal level and control clot formation in patients with hemorrhage (12). The normal level of fibrinogen is 200 to 450 mg/dL (13).

There are different methods for administering fibrinogen. A common way is an intravenous administration. In this route of administration, the drug is distributed throughout the body, but an inadequate amount of the drug may be provided for the injured tissue (14). The complications of intravenous fibrinogen injection include allergic reactions, fever, and thrombotic events such as myocardial infarction and pulmonary embolism (14-17). Another method of prescribing fibrinogen is homeostatic patches, lengthways with collagen, and thrombin. The complications of this method are immune responses and renal complications (18, 19). The topical administration of fibrinogen is a new approach for the administration of this drug. This approach is associated with lower drug requirements and complications and more effectiveness. This method has been described to stop diffuse hemorrhage in TKA in small studies and could be a hopeful approach to reduce blood loss and lower transfusion rates (20).

This study was approved by the Ethics Committee of Ahvaz Jundishapur University of Medical Sciences (IR.AJUMS.REC.1397.419) and registered at IRCT (IRCT20190222042803N1). This double-blind randomized clinical trial was conducted on 40 patients aged 40 - 70 years, with ASA Class I and II, under spinal anesthesia, candidate for TKA in Golestan hospital, Ahwaz, Iran, in 2017 - 2018. Patients were informed of the goals of the study and gave their written consent. The exclusion criteria were dissatisfaction with participation in the study, a history of arthroscopic knee surgery, uncontrolled hypertension, cardiovascular disease, deep venous thrombosis, coagulopathy, use of NSAID and anticoagulant drugs, body mass index > 30, and operation time > 120 min.

The patients were randomized 1:1 to take either fibrinogen or placebo. To ensure that patients, surgeons, and investigators were blind to the treatment before the study, the patient enrollment was done based on computer-generated allocation concealment. The sequences were generated by a self-governing calculator using a random number generator with 1:1 allocation and random block sizes of two.

To blind the study, the patients, the surgeon, and the investigator were not aware of the type of the drug, and the surgeries were performed by a single surgeon. The injectable drug was prepared by the researcher and named A and B.

The sample size was calculated by the sample size estimation formula based on a previous study (23). Considering a probable mean difference of 225 cc or greater in total bleeding between the two groups, to find a statistical power of 0.80 at an Alfa error of 0.05, 20 patients were required in each group. By considering that 10% of the patients would be omitted, 30 patients were enrolled in each group. During the study period from December 2017 to November 2018, 65 patients undergoing elective TNA surgery were qualified to contribute to the trial. They were agreed to contribute and gave their written informed consent. Among them, 10 patients did not meet the inclusion criteria (seven patients had ASA > 2, and three patients were aged > 70). Three patients had a history of cardiovascular disease, five patients were giving anticoagulant drugs, five patients had a body mass index > 30, and two patients had operation time > 120 min. Finally, 40 patients were registered in the study and allocated to the two groups of fibrinogen and control, each with 20 patients (CONSORT diagram).

Patients were divided into two groups: fibrinogen (n = 20) and control (n = 20). Hemoglobin (Hb), hematocrit (HCT), international normalized ratio (INR), platelets (PLT), prothrombin time (PT), and partial thromboplastin time (PTT) were recorded before the surgery as baseline data. Before spinal anesthesia, routine monitoring (pulse oximetry, non-invasive blood pressure, and ECG) was performed, and a ringer solution of 10 mL/kg was infused. Spinal anesthesia was performed in the patients in a sitting position through the L4 - L5 or L3 - L4 spaces using 26G Quincke spinal needles. Hyperbaric bupivacaine (12.5 mg) was injected after assuring proper subarachnoid space detection. In the first 10 minutes, the blood pressure was measured every three minutes, and then it was measured every 5 min. If the systolic blood pressure decreased by 25% of baseline or below 90 mmHg, 5 mg of intravenous ephedrine was injected. The patient's sensory level was assessed by the pin-prick method, and at the T6 level, the surgery was allowed. Tourniquets were used for all patients. The amount of intraoperative bleeding in both groups was calculated based on the difference between the total suction volume and the known irrigation volume.

About two minutes before releasing the tourniquet pressure, 500 mg fibrinogen (Evicel; Ethicon, Johnson & Johnson, Somerville, NJ, USA) diluted with normal saline at a total volume of 20 ml, for patients in the fibrinogen group, and 20 mL of normal saline, for patients in the control group, were injected locally to the knee joint by the surgeon (24). All patients underwent posterior stabilized TKA (Zimmer IN, USA, or Legion, Smith & Nephew, Memphis, TN, USA). At the end of the surgery, one deep drain was fixed for each patient (3.175-mm ConstaVac; Stryker, Kalamazoo, MI, USA) and was placed in low-pressure suction (25 mmHg) for 24 h. The bleeding was calculated and compensated with a packed cell. The estimation of the total blood loss was done by a mathematical approach. We used Nadler’s formula for calculating the blood volume (25), and then, the approximate blood loss was determined by using Mercuriali and Rosechner’s formula (26). The start point for transfusion was a hemoglobin level < 8 g/dL unless medical causes required transfusion above this level. If the amount of bleeding was less than ABL, the patient was given 3 mL of isotonic serum per one milliliter of blood loss. After releasing the tourniquet, the site of operation was sutured and dressed, and patients were transferred to the recovery room. The primary outcomes were intraoperative bleeding, total 24-h drainage collected in the drain, and postoperative blood transfusion. The secondary outcomes were Hb, HCT, INR, PLT, PT, and PTT before the surgery and 24 hours after the surgery.

There were no significant differences between the groups in demographic characteristics (age, sex, and weight) and surgical data (tourniquet time and underlying disease) (Table 1).

Table 1. Demographic and Surgical Data of Patients in the Two Groups a, b

Table 2. Primary Outcomes in Both Groups of Patients a, b

bGroup comparisons were made using t-tests.

Average 24-hour Hgb (A) and Hct (B) preoperatively and perioperatively in fibrinogen and control groups.

Table 3. Comparison of Mean Blood Factors in Patients Before and After Surgery a, b

bThe statistical test was the t-test. 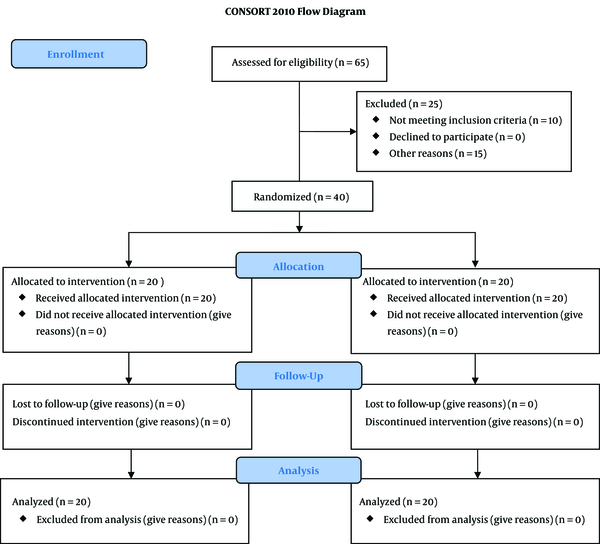 Bleeding after TKA can increase the need for blood transfusion, which enhances the costs and risks of the surgery, and is associated with some complications (27). The administration of topical fibrinogen can reduce drainage, decrease hemoglobin, and lower the need for blood transfusion in TKA. In the present study, although the mean volume of bleeding during surgery was lower in the fibrinogen group than in the control group, there was no significant difference (P > 0.05). However, the mean volume of postoperative bleeding was significantly lower in the fibrinogen group than in the control group (P = 0.0002). In a study, Heyse et al. concluded that the use of fibrinogen in TKA did not lead to a significant decrease in blood loss or transfusion in TKA for osteoarthritis (21). In their study, fibrinogen was used inside the medial knee joint space but did not significantly reduce bleeding and blood transfusion. This difference with our results might be attributed to the method of cauterization applied after the release of the tourniquet. There are two previous studies about the use of fibrinogen for blood loss control in TKA. Levy et al. carried out a prospective, controlled, randomized study on 58 patients undergoing TKA using a human fibrin tissue adhesive from a different manufacturer (Quixil; Omrix Biopharmaceuticals SA, Nes-Ziona, Israel). They used the cruciate-retaining knees and low-molecular-weight heparin for thromboprophylaxis. Their study recognized significant benefits in the intervention group concerning postoperative drain output, hemoglobin drop, and transfusion rate (28). Their results were comparable to this study, although they used fibrin tissue adhesive. The study by Wang et al. described similar results with the same product in patients undergoing TKA in a cohort study (29). Quixil contains tranexamic acid, which has been confirmed to be effective in reducing blood loss.

In a study, Bae et al. evaluated the hemostatic effect of intra-articular injection of a thrombin-based hemostatic agent in TKA. They showed the efficacy of this agent in reducing drain output and blood transfusion rates (22). This study was in line with our study concerning drain output and HB decrease. In 2016, the results of a study by Tartaglia et al. on patients undergoing thyroid surgery indicated that the use of collagen-fibrinogen-thrombin patch reduced the amount of postoperative drainage, as well as bleeding-related complications (30). The Payani et al. study used topical fibrinogen on the precordium in open cardiac surgery. They indicated a reduction in postoperative blood loss after CABG, and patients had higher hematocrit in the postoperative period (31). A recent study obtained similar results, demonstrating that in TNA, the local injection of fibrinogen could reduce postoperative bleeding.

The limitations of this study were the small number of patients so that with this number of cases, we could not get the real result. It is recommended that future studies be conducted with a larger sample size in multiple centers.

The results of this study showed that intra-articular injection of fibrinogen may play an important role in reducing acute postoperative hemorrhage and can be used as an effective intervention to prevent further bleeding and reduce the need for blood products in patients undergoing TNA.

This research was issued from a thesis by Dr. Hojjatollah Khademali, with proposal number IR.AJUMS.REC.1397.419 and IRCT code IRCT20190222042803N1. We would like to thank the Clinical Research Development Unit, Imam Khomeini Hospital, Ahvaz Jundishapur University of Medical Sciences, Ahvaz, Iran, for their cooperation.