The Effect of Dexmedetomidine and Esmolol on Early Postoperative Cognitive Dysfunction After Middle Ear Surgery Under Hypotensive Technique: A Comparative, Randomized, Double-blind Study

Postoperative cognitive dysfunction (POCD) is multifactorial, which may be caused by anesthetic and surgical causes or cerebral injury. This study aimed to evaluate the effect of dexmedetomidine as a neuroprotective drug compared to esmolol on the prevalence of POCD in adult patients undergoing middle ear surgeries under hypotensive anesthesia.

This study included male and female adult patients, according to American Society of Anesthesiology physical status (ASA) I, the patients who underwent middle ear surgeries under hypotensive anesthesia were randomly assigned to two groups that received esmolol and dexmedetomidine. The demographic data, heart rate, mean arterial blood pressure, duration of the surgery, evaluation of the surgical field, and the Mini-Mental State Examination (MMSE) (preoperatively and at 1, 6 and 24 hours postoperatively) were recorded.

This study suggests that intraoperative use of dexmedetomidine as an adjuvant to hypotensive anesthesia reduces the incidence of POCD compared to esmolol.

Cognitive dysfunction is the impairment of memory, perception of mental process, or information processing (1). Postoperative cognitive dysfunction (POCD) is multifactorial, which may be caused by anesthetic and surgical causes or cerebral injury. It may develop into permanent cognitive injury (2, 3). Controlled hypotension is elective decreasing of arterial blood pressure in a controllable manner to decrease surgical bleeding (4) by lowering the mean arterial pressure (MAP) by 30% from the baseline reading or (5) maintaining it at 50 - 65 mmHg (6). Hypotension during anesthesia is related to the pathogenesis of POCD due to the reduced perfusion to important organs, mainly the brain (7, 8). It is a challenging process for anesthetists to provide hemodynamic stability and preventing early mental and cognitive dysfunction. Previous studies compared esmolol and dexmedetomidine as adjuvants during hypotensive anesthesia in terms of their ability to control the blood pressure and to optimize the surgical felid (9), and to our interest, we found in previously published literature by Celebi et al. (10) that the use of esmolol to induce controlled hypotension was associated with POCD. Dexmedetomidine decreases the cerebral blood flow by reducing the cerebral perfusion pressure, but the oxygen supply to the brain is not influenced (11, 12), and it was reported to have a neuroprotective effect (13, 14), so we hypothesize that using dexmedetomidine as an adjuvant during hypotensive anesthesia may reduce the incidence of early POCD.

The primary aim of this study was to evaluate the effect of dexmedetomidine, as a neuroprotective drug compared to esmolol, on the prevalence of POCD in adult patients scheduled for middle ear surgeries under controlled hypotensive technique. Furthermore, the status of the surgical field was assessed by the surgeon as the second purpose.

This comparative, randomized double-blinded (the surgeon and the anesthetist who collected the data were blinded to the study protocol) was conducted at Beni-Suef University Hospital after approval of the anesthesiology, surgical ICU and pain management department, and the local ethics and research committee (approval NO.FMBSUREC/0532019/Bahr, date of approval 5 March 2019) and obtaining written informed consents from the patients from April 2019 to January 2020. It was registered at ClinicalTrials.gov(ClinicalTrials.gov ID: NCT03892512) and included 58 male and female patients in the age group between 20 - 50 years, according to the American Society of Anesthesiology physical status (ASA) I. The patients of both groups were educated (secondary school or higher), non-educated patients and patients with higher educational degrees were excluded. The patients with known allergy to the drugs used in the study or drug abuse, contraindication to hypotensive anesthesia, and pregnant females were excluded. Routine preoperative assessment was performed, including history, physical examination, hematological, and biochemical testing were obtained, and the procedure was explained to the patient.

Mini-Mental State Examination (MMSE) (Appendix 1 in Supplementary File) was used to evaluate the cognitive function because it is an easily applicable, reliable test and is the most commonly used composite measure. It was performed preoperatively by an anesthesiologist (blinded to the study protocol and skilled in using the test), a score of 30 points was considered maximum, and the patients were excluded from this study if the preoperative score is less than 24 (15, 16). All patients received premedication 60 minutes before surgery (ondansetron 4 mg I.V.). Upon admission to the operating theater, the monitors were applied, and the operating room temperature was adjusted at 22°C, and normothermia was maintained using warm IV fluid and a forced-air warming blanket. Under the aseptic technique and after performing the Allens test, the radial artery was cannulated for direct blood pressure recording. Anesthesia was induced using propofol, fentanyl (2 µg/kg), and atracurium and maintained by sevoflurane 2% in an oxygen air mixture and atracurium infusion. The patients were mechanically ventilated to maintain normocarbia. The patients were randomly divided using closed envelop technique as follow:

Esmolol and dexmedetomidine infusion were titrated according to the target blood pressure (MAP 60 - 65 mmHg). The rescue plan in case of bradycardia (heart rate less than 60) or hypotension (MAP less than 60 mmHg) was to discontinue infusion of esmolol and dexmedetomidine and to administer ephedrine in 5 mg increments if the MAP decreased to 55 mmHg or less, and 0.5 mg i.v. atropine to the patients who developed bradycardia (heart rate < 60 beats/minute), and to exclude those patients from the study, but none of the patients had profound hypotension or bradycardia. At the end of surgery; infusing the study drugs was ceased, the inhalation of sevoflurane was discontinued, and the neuromuscular blockade was antagonized, the patients were extubated while fully conscious, obeying commands, and transferred to the recovery room for close monitoring and when the post-anesthesia modified Aldert score (18) was 7 or more the patient was considered awake to confirm that all patients had similar post-anesthesia recovery state before evaluating the cognitive function. The patients were discharged from the post-anesthesia recovery unit to the ward when the score ≥ 9 (phase I recovery).

The following data were recorded by an anesthesiologist blinded to the study: demographic data (age, weight, gender), heart rate (beat/min), mean arterial blood pressure (mmHg) were recorded before the induction of anesthesia, and every 15 min, duration of the surgery, the surgical field was evaluated by the surgeon [at the start, middle, and end of the surgery and the results were averaged] using a 5-point bleeding scale (5), MMSE was also applied preoperatively, and after an hour, this reading was considered (MMSE1), and the test was repeated at 6 hours (MMSE6) and 24 hours (MMSE24) postoperatively (15, 16).

The sample size was calculated using student t-test and G*Power software version 3.1.2 for MS Windows, Germany. For the comparison of the occurrence of early POCD between groups of controlled hypotension during middle ear surgeries (16). The calculated minimum sample size was 23 patients in each armgroup at an α of 0.05 and power of 80%. Twenty-nine patients were included in each group, the data were presented as mean ± standard deviation, median, and range or number and percentage. Numerical data were tested for normal distribution using the Kolmogorov-Smirnov test. Student t-test was used for independent samples, and the chi-square test was used to compare the categorical data. A P-value less than 0.05 was statistically considered significant. The data were analyzed by using SPSS software.

The patients completed the study, as indicated in figure 1. The demographic characteristics (age, weight, gender), and duration of the surgery were not statistically different between both groups (Table 1). The patients of both groups were educated (secondary school or higher). The socio-economic level was also comparable. The median and range of the bleeding score were 2 (1-3) and 2 (1-4) for esmolol and dexmedetomidine groups, respectively, with highly statistically significant differences (P = 0.006). The median and range of MMSE score were comparable between the two groups preoperatively and at 1,6 and 24 hours postoperatively (P > 0.05), (Table 2), but since a decrease of 2 or more of MMSE was considered cognitive function decline and a score lower than 24 was recorded as cognitive impairment, so based on this knowledge, we calculated the incidence of POCD at 1, 6, 24 hours postoperative in terms of number and percentages. The incidence of POCD was less in the dexmedetomidine group at 1,6 and 24 hours postoperatively compared to the esmolol group (P <0.05), (Table 3). The MAP and heart rates were comparable between both groups without a statistically significant difference (Figures 2 and 3, respectively). None of the patients developed bradycardia or profound hypotension. Moreover, no side effects related to dexmedetomidine were reported (e.g., delayed recovery or sedation). 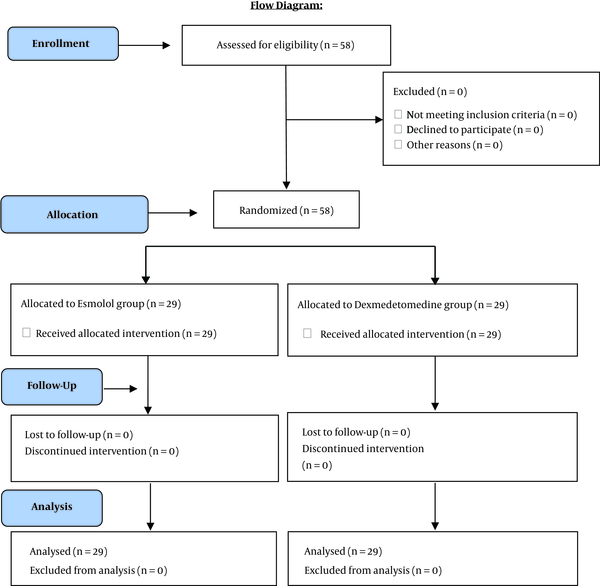 CONSORT flow diagram of this study.

Table 1. Demographic Data of the Patients and Duration of Surgerya

aData are described in median (range); P-value < 0.05 is statistically significant.

Table 3. The Number and Percentage of Patients Who Had Post-Operative Cognitive Dysfunction (MMSE 23 - 24)a

aValues are described as number (%); P-value < 0.05 is statistically significant. 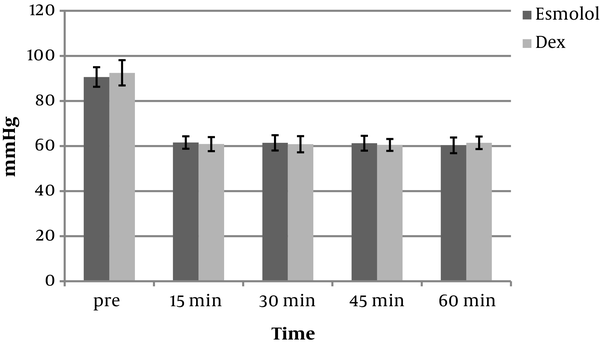 This study demonstrated that the use of dexmedetomidine as an adjuvant for hypotensive anesthesia during middle ear surgery for adult patients was associated with a decreased incidence of POCD compared to esmolol.

The fluctuation of the systemic blood pressure, cardiac output or cerebral metabolic rate, and the use of drugs with vasoconstrictor effect may influence the cerebral perfusion and metabolism (19). Clinicians thought that cognitive dysfunction is more frequent with general anesthesia (19) because the drugs used for general anesthesia may antagonize the central cholinergic transmission and decrease the acetylcholine in the brain, which is crucial for memory and learning (20). It has been reported that POCD is caused by hypotension and excessive doses of anesthetic drugs (19, 20). POCD may be related to postoperative pain (7), inflammatory or metabolic causes or endocrine stress response related to surgery (10), increased age, duration of anesthesia, less education or postoperative infection (1).

Several reports on animal models reported that dexmedetomidine has neuroprotective effects (21-24). Recent evidence suggested that its effect is regulated by the binding to imidazoline-1 receptors, which are regulators for cell survival (25, 26). Yang et al. (27) meta-analysis reported that perioperative dexmedetomidine treatment significantly reduced the incidence of POCD, this was also reported by Zhang et al. (28) in elderly patients scheduled for laparoscopic surgery for colorectal cancer. Also, Zhou et al. (29) meta-analysis showed improvement of postoperative MMSE score in elderly patients when using dexmedetomidine. Chen et al. (30) reported a reduced incidence of POCD by 9.20% and 21.31% in dexmedetomidine and control groups, respectively.

On the other hand, Mohamed and Shaaban reported that using dexmedetomidine was not associated with protection against POCD in elderly patients after major surgery (31), another study also reported that dexmedetomidine has no neuroprotective effect after cardiac surgery, and both attributed their results to small sample size, long duration of surgery and type of patient (32). When using esmolol and dexmedetomidine to reach the target MAP (55 - 65 mmHg), it was not required to increase the sevoflurane concentration, and this was the benefit of using these adjuvants during controlled hypotension since increasing the dose of inhalational anesthetics to produce controlled hypotensive anesthesia affects the brain function, including the cerebral blood flow and metabolism. Also, fentanyl 2 µg/kg was administrated during the induction of anesthesia, and mild to moderate painful surgery makes the change in sevoflurane level mild (2% - 2.5%).

This study suggested that intraoperative use of dexmedetomidine as an adjuvant to hypotensive anesthesia in middle age patients after middle ear surgery reduced the incidence of POCD compared to esmolol. Further studies are recommended on a larger population of different age groups to prove the role of dexmedetomidine in protection against POCD with different anesthetic techniques and to follow up the patients postoperatively.

We would like to acknowledge Asharaf Abel Mawgood and Ahmed Badawy for the final revision and their valuable comments.