The present study primarily intended to compare the effectiveness of dexmedetomidine versus labetalol in providing controlled hypotension during FESS and then to assess the quality of the surgical field.

The current research was conducted as a prospective randomized double-blinded clinical study. Sixty patients of the American Society of Anesthesiologists grade I or II status undergoing FESS under general anesthesia were divided into two groups, each with 30 members. Patients receiving dexmedetomidine and labetalol were named as group D and L, respectively. The study intended to manage mean arterial pressure (MAP) between 65 - 75 mmHg. The visibility of the operative field was evaluated using Fromme and Boezaart scoring system. Total intraoperative fentanyl consumption and postoperative first analgesic request time were recorded.

Functional endoscopic sinus surgery is a widely performed surgical intervention to treat various sinus pathologies. FESS is a minimally invasive surgery that reestablishes the drainage and ventilation of paranasal sinuses (1). A bloodless operative field not only provides better visibility but also prevents the development of various complications like orbital injury, cerebrospinal fluid leakage, and meningitis. In addition, it is associated with decreased duration of surgery. Controlled hypotension can minimize intraoperative blood loss and improves surgical field quality (2). Several pharmacological agents are developed to control hypotension, including remifentanil (3), magnesium sulphate (4), nitroglycerine (5), esmolol (5), and dexmedetomidine (5). The effect of dexmedetomidine on controlling hypotension is well known and is compared with other agents like remifentanil (3), magnesium sulphate (4), esmolol (5), clonidine (6), and fentanyl (7, 8). Our institute has a history of providing FESS to normotensive patients under general anesthesia. However, these procedures not only resulted in unacceptable surgical conditions but also were associated with increased duration of surgery. Although several clinical studies reported that dexmedetomidine can decrease hemodynamic responses and is associated with improved quality of surgical procedures of FESS, but we could not find a study on comparing dexmedetomidine with labetalol during FESS. Hence, we decided to perform such a comparison in our institute (3, 7).

Dexmedetomidine is a potent α2 adrenergic agonist. One of the highest densities of α2 receptors is located in the pontine locus cereleus, an important nucleus mediating sympathetic nervous system function, vigilance, analgesia, and arousal (9) . Labetalol is a unique parenteral anti-hypertensive drug that has selective a1 and non-selective β1 and β2 adrenergic antagonist effects. In humans, the β to α blocking potency ratio is 7: 1 for IV labetalol. Labetalol can reduce blood pressure by declining systemic vascular resistance (α1 blockade), whereas reflex tachycardia triggered by vasodilation is attenuated by simultaneous β blocking (9).

The present study primarily intended to compare the effectiveness of dexmedetomidine with labetalol in providing controlled hypotension during FESS and then evaluating the quality of the surgical field.

After obtaining institutional ethical committee approval (SSMC/IEC/NOV 22/2017), the current prospective randomized double-blinded clinical study was conducted from January 2018 to July 2019 at Siddhartha Medical College Hospital and Research Centre, Tumkur, India. Sixty patients belonging to the American Society of Anesthesiologist grade I or II status of either sex aging from 18 to 45 years scheduled for FESS were included in the study. Patients having hypertension, sinus bradycardia, hypotension, coagulation disorder, cerebrovascular insufficiency, ischemic heart disease, congestive cardiac failure, cardiac dysrhythmias, and hepatic and renal disorders were excluded. Patients were assigned into two groups of D (received IV Dexmedetomidine, (Dextomed, 50 µg /0.5 mL; neon, India) and L (received IV labetalol (lablol 5 mg/mL; neon, India)) according to computer-generated randomization table (each group comprised of 30 members). Using the literature available and a pilot study conducted in our institution, the dosages of the drug were decided. A thorough pre-anesthetic evaluation was performed a day before the surgery. On the day of surgery, two dedicated intravenous lines were secured, one for infusion of dexmedetomidine or labetalol and the other for the administration of fluids and general anesthetic medications.

On arrival to the operating room, standard ASA monitors were connected. Ringer lactate, 10 ml.kg-1 was started. After attaching the monitors, non-invasive blood pressure, pulse oximeter, and electrocardiogram, and baseline vital signs were recorded. An anesthesiologist, who was involved in the group designing but not in the administration of anesthesia, prepared and allocated dexmedetomidine and labetalol. A different anesthesiologist administered general anesthesia drugs and collected the required data. The surgeon and anesthesiologist who administered the study drugs were blinded to the study design. Hence, the blinding was achieved throughout the procedure.

Patients in the group D received IV dexmedetomidine 1 µg.kg-1 diluted in 50 mL of 0.9% normal saline as loading dose, followed by an infusion of 0.4 µg.kg-1.h-1 as maintenance dose. Group L received IV labetalol 0.4 mg.kg-1 intravenously as loading dose after diluting with 50 mL of 0.9% normal saline, followed by an infusion of 0.04 mg.kg-1.h-1 as the maintenance dose. The infusion was maintained throughout the surgery. The study drugs were administered 10 minutes before induction of anesthesia. The general anesthesia technique was used in all patients. Patients were premedicated with IV glycopyrrolate 0.005 mg.kg-1, IV midazolam 0.05 mg.kg-1, and IV fentanyl 2 µg.kg-1. The IV propofol 2 mg.kg-1, IV vecuronium 0.1 mg.kg-1, and maintenance dose of 0.02 mg.kg-1 were intravenously for all patients. Endotracheal intubation was achieved with appropriate tube and were connected to a mechanical ventilator. The general anesthesia was maintained with oxygen and nitrous oxide at a 40: 60 ratio. Normocapnia was achieved throughout the procedure. We used an oropharyngeal pack. The mean arterial pressure was maintained between 65 - 75 mmHg. The duration of infusion was constant in both groups. To achieve consistency, all surgical procedures were performed by one surgeon. The quality of the operative field was assessed using the scale developed by Fromme and colleagues. If the MAP was below 65 mmHg, IV ephedrine 6mg intravenously was administered. Also, IV atropine 0.01 mg.kg-1 was administered for cases with a heart rate lower than 50 beats/minute. An additional dose of fentanyl 0.5 µg.kg-1 was given intraoperatively with an increase in heart rate and mean arterial pressure more than 20% from the baseline values. The visibility of the operative field was assessed according to the scale proposed by Fromme and Boezaart (9).

Throughout the intraoperative period, MAP and HR were recorded before starting the bolus and infusion of the study drug (baseline measurement, one minute after endotracheal intubation, and then every 15 minutes throughout the procedure). The oropharyngeal pack was removed, and the oropharynx was suctioned under vision using a rigid laryngoscope. The muscle relaxation was reversed with IV neostigmine 0.05 mg.kg-1 and IV glycopyrrolate 0.01 mg.kg-1 when the patient was fully awake, breathing regularly with adequate tidal volume. The total duration of surgery, total anesthesia time, and total intraoperative fentanyl consumption time were recorded. In the postoperative period, the visual analogue score (VAS) was used to assess the pain, and IV fentanyl 25 µg injected when the score was more than four and the first analgesic request time was recorded.

Two patients developed a decrease in HR of 50 beats/minute in the dexmedetomidine group and were treated with IV Atropine 0.6 mg. None of the patients developed hypotension of MAP < 65 mmHg. We planned to provide control hypotension and optimum operative field. In the current study, the administration of dexmedetomidine and labetalol provided good vision during the surgery. Although MAP was managed at a relatively high level (65 - 75 mmHg), which increased patient safety. 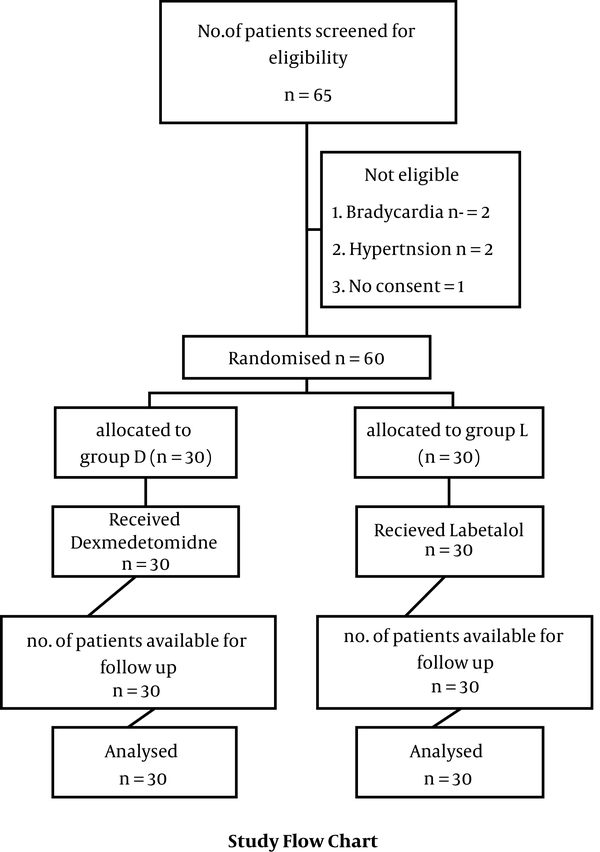 Sixty-five subjects were enrolled in the study, of which 60 met the criteria for the study and consented to participate. Participants were divided into two groups (each with 30 subjects).

b Statistically significant at P < 0.05.

Table 2. Comparison of Mean Arterial Pressure after Induction Times Between Labetalol and Dexmedetomidine a

b Statistically significant at P < 0.05.

We investigated the effects of dexmedetomidine and labetalol in an attempt to find a clinically feasible combination with general anesthesia to ensure perioperative hemodynamic stability and better surgical field visibility. In the present study, the efficacy of dexmedetomidine versus labetalol in providing controlled hypotension in FESS was compared. We also compared hemodynamic response quality of the surgical field, intraoperative fentanyl consumption, and time since the first analgesic request. The two groups were comparable concerning age, gender, BMI, duration of surgery, and duration of anesthesia. Although we did not achieve controlled hypotension during the entire surgery in the study, according to the findings, the mean arterial pressure values were lower in group D than in group L from the 20th minute of induction. Besides, the heart rate was lower in group D than group L, and its trend was significantly lower in group D. Dexmedetomidine is a selective α2 agonist that is known for its sedative, analgesic, and anesthetic sparing properties (7, 8, 11). In the present study, the abovementioned actions may have contributed to better perioperative hemodynamic stability and surgical field visibility in patients who receive dexmedetomidine. Labetalol is often the preferred treatment for acute hypertension, as it produces a dose-related decrease in blood pressure without reflex tachycardia and without causing a significant decline in heart rate (12).

In the present study, patients in group D consumed less fentanyl compared to group L (41.9 ± 5.8 vs 59.9 ± 5.3, respectively) (P-value < 0.05). It can be attributed to the opioid-sparing effect of dexmedetomidine. This finding is consistent with those reported by Praveen et al., that compared dexmedetomidine and nitroglycerine for hypotensive anesthesia in FESS. They reported that patients in group D required less intraoperative fentanyl compared to group N (139 µg vs 188 µg, respectively). Similar results are expressed by Tarek Sham, where total intraoperative fentanyl dose was lower in dexmedetomidine group compared to that of Esmolol group (16). In the present study, the first analgesic request time was 50.2 ± 9.1 in group D vs 24.8 ± 5.1 in group L, respectively, which was statistically significant (P-value < 0.05). Even though Group L received more fentanyl intraoperatively than Group D, which reveals that dexmedetomidine contains both opioid-sparing and inherent analgesic action properties due to α2 agonist action. The findings of the present study are in accordance with those reported by Praveen et al. (group D 377 minutes vs group N 86 minutes). Dexmedetomidine is a selective α2 agonist that is known for its sedative, analgesic, and anesthetic sparing effects (17).

The study by Bajwa et al. (5) compared the effect of dexmedetomidine, nitroglycerine, and esmolol in FESS surgery. They reported that the dexmedetomidine group reduced the need for the intraoperative opioid requirement and increased the first analgesic requirement time in addition to hemodynamic stabilization. Although it was not our main objective to study the anesthetic sparing effects, it became apparent also in our results, as the hemodynamic stability was better maintained in the dexmedetomidine group receiving less fentanyl compared to the labetalol group. The present study demonstrated prolonged postoperative analgesia in the dexmedetomidine group, which is consistent with the study by Gurubet et al (18), who reported that intraoperative infusion of dexmedetomidine could reduce the postoperative analgesic requirement. In the current study, we selected a target MAP of 65 - 75 mmHg to provide the best operative condition without causing tissue injury. This in accordance with the study by Seyed Mohammad Reza Gousheh et al (19). One of the limitations of the current study is the absence of a placebo-controlled group. Besides, the sample size was limited. Secondly, we did not measure sedation score and plasma catecholamine concentration, which may reveal relations between sympatholytic properties of α2 agonist, β adrenoreceptor antagonist. Another limitation is that we compared labetalol and dexmedetomidine based on their known optimal as well as safe premedicating doses without the knowledge of their equipotent doses. Hence, this limitation should be addressed in future studies with larger sample size.

Based on the findings and the literature, we can conclude that dexmedetomidine is the preferred option for controlling hypotension that provides better surgical field visibility compared to labetalol in Functional endoscopic sinus surgeries.

We would like to acknowledge our statistician Mr. Riyaj Ahmad Kalburgi, assistant professor/statistician, Department of Community Medicine, SSMC for helping us in the statistical analysis.

Copyright © 2021, Author(s). This is an open-access article distributed under the terms of the Creative Commons Attribution-NonCommercial 4.0 International License (http://creativecommons.org/licenses/by-nc/4.0/) which permits copy and redistribute the material just in noncommercial usages, provided the original work is properly cited.
download pdf 227.28 KB Get Permission (article level) Import into EndNote Import into BibTex
Number of Comments: 0