Cardiac surgery-associated acute kidney injury (CSA-AKI) is a major adverse effect of cardiac surgery. The early detection of this complication can improve the quality of postoperative care and help prevent this phenomenon.

In this prospective descriptive-analytical study, 148 patients were enrolled, 107 of whom were selected for analysis between February and September 2019 in the Cardiac Surgery Unit of Golestan Hospital, Ahvaz, Iran. Kidney tissue oxygen saturation was measured at multiple definite times during surgery. Hemoglobin, blood urea nitrogen, creatinine, and lactate were measured during and 48 hours after the surgery.

Kidney saturation monitoring could be considered in cardiac surgery for the rapid detection of CSA-AKI. Although kidney tissue saturation is not correlated directly to the arterial oxygen saturation, the physician and the surgery team can predict the chance of acute kidney injury.

Cardiac surgery and its complications have negative impacts on kidney function and can lead to acute kidney injury, which is related to augmented complications and mortality (1). Multiple factors, including pre-, intra-, and post-cardiac surgery, make the kidney susceptible to injury, which is known as cardiac surgery-associated acute kidney injury (CSA-AKI) (2). There are more than 30 different diagnostic criteria for CSA-AKI such as RIFLE, KDIGO, AKIN, etc., resulting in different ranges of CSA-AKI incidence, up to 30% in the literature (3). Recently, new CSA-AKI markers such as neutrophil gelatinase-associated lipocalin (NGAL) have been discovered, but the common criteria for diagnosis are still based on the increase of plasma creatinine levels (4). Causes and pathways of CSA-AKI induction according to pathophysiology are different, including age, CPB time, cross-clamp time, type of operation, poisons, metabolic factors, ischemia, reperfusion injury, activation of neurohormonal factors, inflammation, and oxidative stress responses (5, 6). Numerous trials have been conducted on the improvement and confirmation of new predictor scales. However, all of the scales have had limitations.

The monitoring of kidney oxygen saturation based on near-infrared spectroscopy is a new approach in the diagnosis of CSA-AKI before the rise of creatinine (7). Near-infrared spectroscopy (NIRS) is a noninvasive approach for the detection of CSA-AKI, which can continuously measure the variance between oxygenated and deoxygenated hemoglobin in a local soft-tissue zone, and so obtaining the regional oxygen saturation (rSO2) (8). This technique is limited by its depth of penetration into the tissue. Interfering with factors like bilirubin, skin pigmentation, and peripheral light also affects its response (9). Near-infrared spectroscopy in open-heart surgery is routinely used for the monitoring of brain oxygen saturation (bSO2). The desaturation of the brain during surgery can be associated with an increased risk of cerebral dysfunction (10). Numerous studies have revealed an association between brain and somatic NIRS monitoring and mixed venous oxygen saturation (ScvO2) and local tissue perfusion (11, 12). Kidney oxygen desaturation during surgery can lead to postoperative AKI (13).

This study aimed to investigate the effect of NIRS on the early diagnosis of CSA-AKI.

This study was approved by the Anesthesiology and Pain Research Center, Ahvaz Jundishapur University of Medical Sciences (PAIN-9805), under the supervision of the AJUMS Research Ethics Committee (code: IR.AJUMS.REC.1398.097). A prospective descriptive-analytical study was accomplished at the Cardiac Surgery Unit of Golestan Hospital, Ahvaz, Iran, between February and September 2019. Written informed consent was signed by all patients. All procedures were performed according to the standard of care of the center. The inclusion criteria included patients aged between 30 and 75 years, candidates for on-pump cardiac surgery. The exclusion criteria included a history of renal disease, BMI > 35, EF < 30%, history of drug use that would directly affect the kidneys like NSAID, electrolyte disturbance, urgent surgery, and redo surgery. The CSA-AKI diagnosis was according to the KDIGO criteria (including an increase in SCr ≥ 0.3 mg/dL or greater within 48 hours or an increase in SCr ≥ 1.5 times of baseline within seven days after surgery) (3).

Standard monitoring, including five-lead electrocardiography, pulse oximetry, and arterial line for continuous blood pressure monitoring and blood gases, was done after arrival at the operating room. The NIRS sensors were attached to the right and left flank area. Before the induction of anesthesia, kSO2 was recorded as the baseline. A standard anesthesia technique was used for all patients. A central venous catheter was introduced after the induction of anesthesia. The cardiopulmonary bypass was started subsequently injection of 350 µ/kg of heparin for each patient. ACT 450 - 480 second was the goal of heparin dosage. Besides, CPB time and cross-clamp time were recorded. After the termination of CPB, heparin was reversed by protamine (1 mg/kg). The CPB, cardiac surgery, and postoperative management were the same for all patients.

The cardiovascular ICU admission was made for all patients after the surgery, and a standard protocol was used for sedation, analgesia (propofol 0.5 mg/kg/h and morphine sulfate 0.1 mg/kg/h), and mechanical ventilation (SIMV mode of ventilation). Patients were extubated when the weaning criteria emerged. 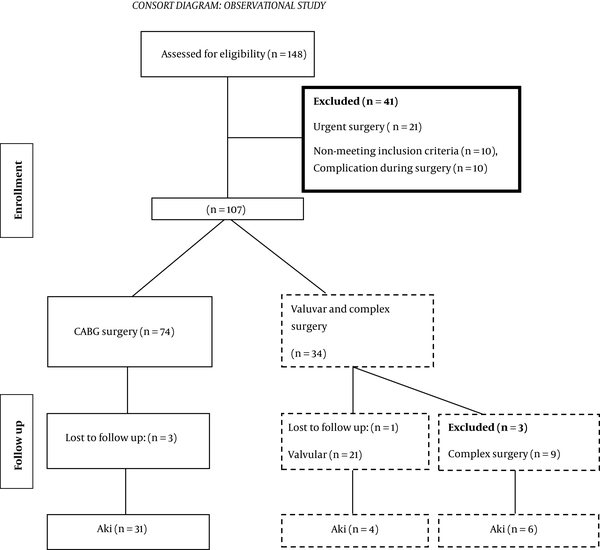 The time points of kSO2 measurement were before the surgery (T0), after induction of anesthesia (T1), at the beginning of CPB (T2), during CPB (T3), after weaning off CPB (T4), and at ICU admission (T5). The left and right kidney saturation was measured at T0-T5 by NIRS (INVOS 5100C; Medtronic, Inc., Minneapolis, Minn). We assessed the correlation between kSO2 and CSA-AKI using the KIDGO criteria (14).

The normality of all data was checked by the Kolmogorov-Smirnov (K-S) test, Shapiro-Wilk test, and D’Agostino skewness test (15). The parametric and non-parametric correlation was calculated between all study variables. The sensitivity and specificity of kSO2 were analyzed by AUC-ROC analysis. The time-course data were analyzed by RM-ANOVA and non-parametric RM analysis. The frequency of secondary outcomes was examined by the Fisher exact test. 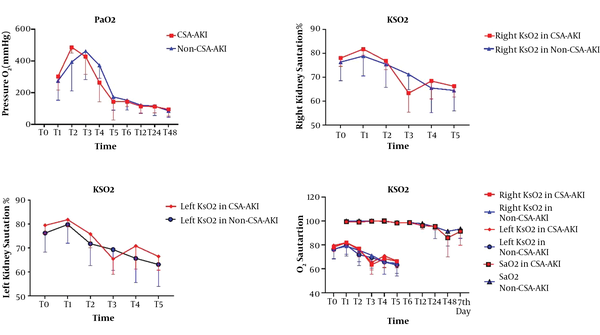 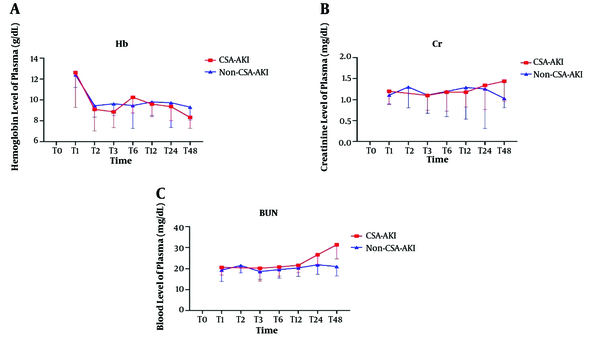 The trend of changes in hemoglobin, creatinine, and blood urea nitrogen in the study 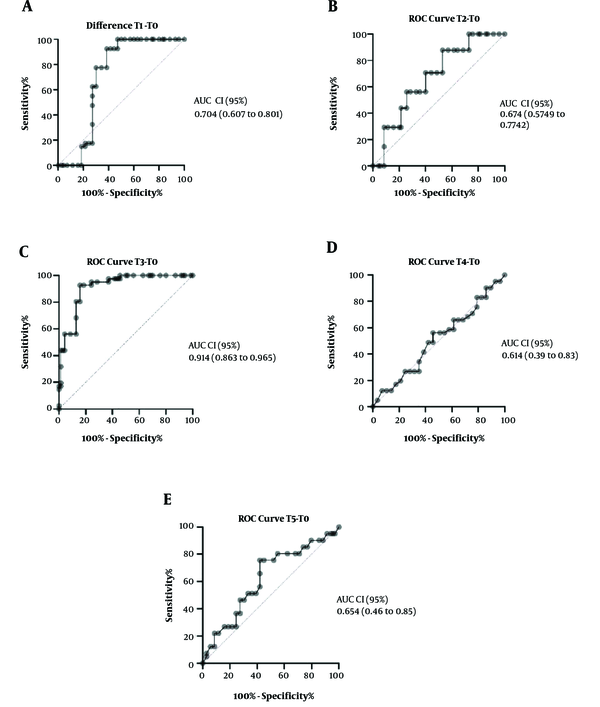 The early diagnosis of cardiac surgery-associated acute kidney injury by current diagnostic methods is not feasible nor cost-effective. The traditional type of CSA-AKI diagnosis is based on the creatinine rise, which is not distinguishable at the golden time of treatment. A fast and plausible approach in CSA-AKI could save the life of many cardiac surgery patients. Recently, measuring kidney tissue oxygen saturation via NIRS has been suggested as a novel and noninvasive method (7, 16-19). Although previous studies showed the significant application of NIRS in monitoring during cardiac surgery, a practical approach with which the anesthesiologist can clinically make a decision and definite diagnosis is not clear. Focusing on the definite time based on the knowledge of pathophysiology, CSA-AKI can be a diagnostic approach. The measurement times that were chosen in this study were based on the pathophysiological point that had a role in CSA-AKI induction.

This study showed that kidney oxygen saturation monitoring has a high value in the diagnosis of CSA-AKI. In this study, T1 was chosen as a definite point of time because it was the induction time, T2 was at CPB onset, T3 was during CPB, T4 was at the end of CPB, and T5 was at ICU admission, which were chosen based on the pathophysiology of CSA-AKI (5). Although many pathways for CSA-AKI induction are suggested, our conservative inclusion and exclusion criteria reduced confounding variables in this study, such as drug regimen changes and drugs that directly affected the kidneys like NSAID and acid and base disturbances. One of the valuable findings of this study was the definition of a sensitive and specific point for the measurement of kidney saturation. This clinical point was during CPB time. The difference of T3 from baseline could be a good index in diagnosing CSA-AKI.

A study done in 2018 by Ortega-Loubon et al. (7) showed that a 20% decrease of NIRS from baseline could be considered a good index for CSA-AKI diagnosis. However, decreases in kSO2 in our study were not like the mentioned study due to the single-point measurement of kSO2, a difference of T3 from baseline confirmed the Ortega-Loubon et al. (7) study, and have high sensitivity of dismissal in distinguishing of CSA-AKI. As in the Ortega-Loubon et al. (7) study, brain tissue saturation had no relationship with kidney tissue saturation and is the reason why we did not assess brain oxygen saturation bought blood oxygen saturation also has not relation with kSo2. The only aspect that differentiates our study from the study by Ortega-Loubon et al. (7) is that we looked for decreases from baseline at a definite time and evidence of acute kidney injury. That’s meant to evaluate to factor simultaneously. The reperfusion phase after ischemia causes increases in tissue oxygen saturation, but this is an effective factor in AKI. As we showed, the middle of CPB time is suitable, according to ischemia-reperfusion. However, it is not a pharmacologically approved treatment for CSA-AKI, evidence of the effectiveness of dexmedetomidine, vasopressin, and some amino acid suggested (3). Each drug-affected oxidative stress and inflammation pathway, for example, dexmedetomidine in Inhibit jak/stat phosphorylation (20).

The result of this study showed that older age (although insignificantly) and prolonged CPB time were correlated with postoperative CSA-AKI, indicating that its occurrence is multifactorial (21). Age is an independent risk factor for this complication (22).

CPB causes the activation of inflammatory factors and produces vasomotor changes in the kidney. Therefore, as the cardiopulmonary bypass time is longer, more inflammatory reactions will be expected (23). Moreover, the effect of the type of operation on the occurrence of CSA-AKI is clear. Valve surgery and complex surgery are associated with an increased risk of this complication. This fact was provided by this study (21).

The probability of CSA-AKI is between 7% and 40% based on previous studies, while it was 41.41% in our study (24, 25). These findings are comparable to the presently reported data, and this may be due to establishing sufficient perfusion pressure and preventing the use of nephrotoxic drugs. Because serum creatinine can peak in up to seven days after the surgery (rendering to the KDIGO criteria for CSA-AKI) and the measurements of NIRS were done only during the surgery, the measurements of kSO2 provided limited duration to take quick responses. The main benefit of this new noninvasive technique is the rapid and continuous response, and this is the greatest benefit of NIRS. Thus, this can help prevent postoperative CSA-AKI (13).

Table 2. Postoperative Outcomes Based on the Presence of Acute Kidney Injury

In multiple animal studies that induced ischemia-reperfusion, many factors were involved, such as oxidative stress and inflammation pathways (26). The activation of pro-inflammatory and inflammatory cytokines like TNF-α (27), IL-6 (28), and JAK/STAT (29), and phosphorylation pathways (30, 31) are the fundamental reasons for the development of CSA-AKI. Kidney saturation by NIRS to use antioxidant agents could be considered a future method in the prevention of CSA-AKI.

As a major limitation of this study, we needed longer periods of observation and multivariate analysis (cohort study) to omit biases. We suggest a large multicenter study with a heterogeneous population. The second limitation was the lack of NIRS monitoring in the ICU. It is also recommended for further study.

Kidney saturation monitoring may be considered in cardiac surgery for the rapid detection of CSA-AKI. Although kidney tissue saturation is not correlated directly to the arterial oxygen saturation, the physician and the surgery team can predict the chance of AKI.

This study was done with the support of the Pain Research Center, Ahvaz Jundishapur University of Medical Sciences, Ahvaz, Iran (grant no.: #PAIN-9805). Special thanks go to Imam Khomeini Clinical Research and Development Unit for scientific support of this research.