Effective postoperative pain control is an important factor for the success of rehabilitation programs. Adductor canal block (ACB) is a recently developed technique.

This study aimed to evaluate the application of ACB in patients who underwent knee surgery.

We performed ACB guided with ultrasonography for patients who underwent knee surgery. ACB was performed 14 days after surgery in the outpatient clinic with a ropivacaine mixture. The pain was evaluated using the visual analogue scale (VAS) every two days.

In this study, 115 patients were included. The mean score of VAS before ACB on the fifth, seventh, and ninth days was 7.4, 7.2, and 6.2, respectively. Mean VAS was significantly decreased after providing the intervention. However, the VAS score was increased gradually until the 23rd day and then flattened. Analgesic (etoricoxib) consumption was 102 mg, 98 mg, and 98 mg in postoperative days (POD), 5th, 7th, and 9th, respectively. Analgesic consumption was significantly decreased (16 mg) after ACB (POD 15th) and gradually increased in PODs 17th, 19th, and 21st. Only one patient complained of thigh hematoma after the ACB procedure.

Single-shot ACB, provided in outpatient clinics, is a safe intervention that could significantly decrease both pain and analgesic consumption. It may enhance the postoperative rehabilitation program.

In order to have an optimal postoperative range of motion (ROM) after knee surgery, it is necessary to have a comprehensive treatment strategy, which can be based on the effect of surgical technique on clinical outcomes, implant selection, postoperative physiotherapy, and postoperative pain management (1).

Pain management after knee surgery is of crucial importance for restoring optimal knee function. Patients can undergo the rehabilitation program with a controlled pain threshold in order to prevent knee stiffness and thigh muscle hypotrophy.

Adductor canal block (ACB) is a popular pain management plan for those who underwent knee surgery compared to femoral block, especially because it has no negative effect on quadriceps muscle strength. It can also encourage patients to engage in a powerful and painless postoperative rehabilitation program (1, 2). ACB is an effective strategy as it affects only the sensory nerve, specifically the saphenous nerve. Previous studies demonstrated that ACB, performed after total knee arthroplasty, could significantly reduce postoperative pain and morphine intake and increased patient’s adherence to the rehabilitation program (1, 2).

Adductor canal block is usually provided after surgery in the operating room. Few studies have investigated the effects of ACB at outpatient clinics.

This study aimed to evaluate pain and the daily need for analgesics after performing ACB in an outpatient clinic following knee surgery. We performed ACB fourteen days after surgery due to the following reasons: 1- Surgical wounds are healed; 2- Intensive rehabilitation program is begun; and 3- Free of anticoagulant drug administration.

In this prospective cohort study, ACB was provided to patients who knee surgery 14 days following the surgery in an orthopedic outpatient clinic. The study was conducted from August 1st, 2019 to March 31st, 2020. The inclusion criteria were: patient who underwent knee surgery, willingness to participate and signing the informed consent form, 18 to 80 years of old, and body mass index (BMI) of 20 - 35 kg/m2. The exclusion criteria were having a history of allergy, alcohol use, and drug abuse, free from anticoagulant drug administration for 48 hours, and having another scheduled surgery.

The ACB was performed 14 days after the surgery. After disinfecting the skin, the curve ultrasound transducer (Philips Epic 7) was placed on the medial side of the mid-thigh. Below the sartorius muscle, femoral artery and vein were identified using a short-axis plane in the adductor canal. A SonoPlex needle (21G x 100 mm; Pajunk Medical Systems LP, USA) was inserted from the lateral side of the transducer. The needle tip was placed below the sartorius muscle and penetrated the fascia at the lateral to the femoral artery and vein. Normal saline with volume 1 – 2 mL was injected into the suspected adductor canal to confirm the needle was placed in the right position in the adductor canal. The enlarged adductor canal was a hallmark that the needle is in the correct position. A local anesthetic agent (ropivacaine) was injected slowly, using ultrasonography (USG) monitor to observe the adductor canal enlargement.

All subjects received the same regiment. We mixed ropivacaine 0.2% with isotonic saline and steroid (dexamethasone) in a 1: 1: 1 ratio with each item 5 mL. All procedures were performed by a single orthopedic surgeon (SR) experienced in pain intervention guided with ultrasonography. Patients received an analgesic drug (etoricoxib) during the study period and were allowed to increase it whenever they had disturbing pain until maximal dose (120 mg/day).

Table 1. Characteristics of Study Participants a

aValues are expressed as mean ± SD unless otherwise indicated 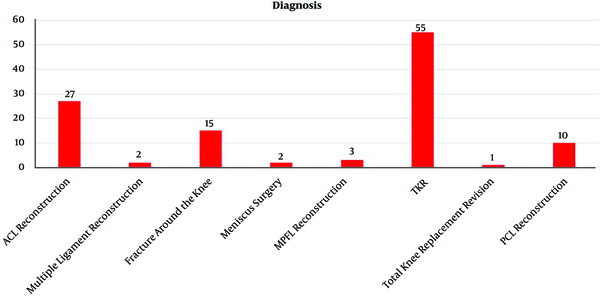 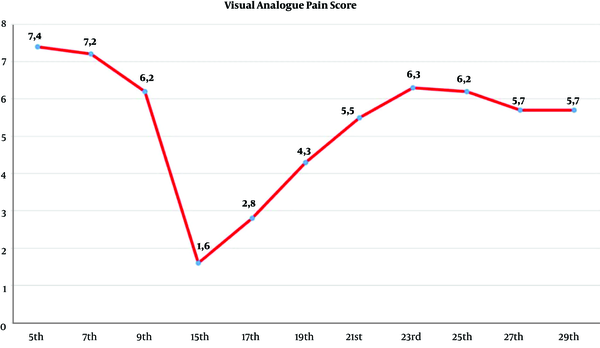 The mean analgesic (etoricoxibe) consumption before receiving the ACB in POD 5, 7, and 9 was 102 mg, 98 mg, and 98 mg, respectively. After receiving ACB, analgesic consumption was decreased significantly (16 mg) in POD 15, then gradually increased on days 17, 19, and 21. After POD 21, analgesic consumption remained stable (Figure 3). One patient complained of hematoma in the thigh (in the insertion needle site) after injection. 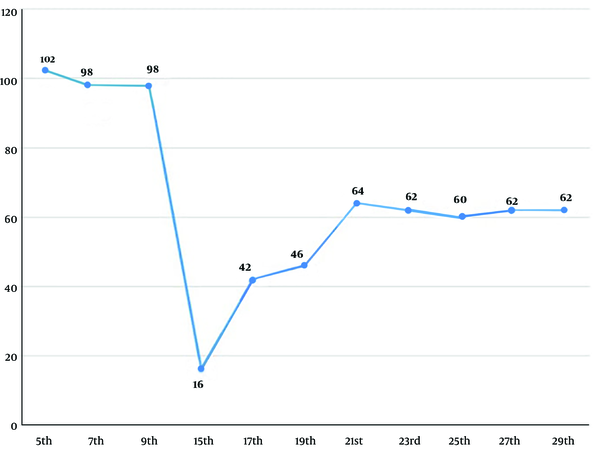 Several procedures are developed for managing acute pain and postoperative pain, including analgesic drug or morphine administration, prolotherapy, radiofrequency, and nerve block (3-8). For acute pain in the knee region, ACB and femoral nerve block are the most popular treatments. Recently the ACB is reported as the preferred option because this procedure has no effect on muscle strength (9, 10).

Our study showed that 47% of the cases were after total knee surgery, and all of whom were elderly patients who need a painless knee to follow the rehabilitation program. Besides that, there were 44 patients (38.2%) after knee ligament reconstruction, who also needed treatment following intensive physiotherapy with a painless knee to restore knee function. ACB in an outpatient clinic can decrease significant pain, and patients can follow physiotherapy according to their own timetable. We choose ACB in POD 14th because: 1- Surgical wound had healed; 2- Patient began the intensive rehabilitation program; 3- Free of anticoagulant drug administration; and 4- Patient began to enter the rigorous phase of physiotherapy to prevent muscle hypotrophy and stiffness of the knee joint.

In the same vein, another study that compared injection volumes of 15 and 20 mL reported no significant difference (with a success rate of 90.2% and 95.1%, respectively) (2). Other studies reported that ACB procedure with 20 mL injected mixture volume could cause quadriceps muscle strength deterioration (2, 11, 12).

A previous study revealed that ACB procedure with less than 20 mL injected mixture on mid-thigh purely could block the sensory nerve and only affected the vastus medialis muscle. The findings of the present study revealed that this procedure could minimalize postoperative pain and did not affect muscle strength. Hence, it can enhance early ambulation and outcomes of the rehabilitation program.

This study revealed a significant decrease in pain following providing ACB procedure on POD 15, which gradually increased after POD 15 and became stable after POD 23 (Figure 2). In the present study, the duration of pain decreasing after the ACB procedure lasted for five days (POD 19), with a VAS score of less than 5. After POD 19, the patients still experienced moderate pain but could tolerate the rehabilitation program. Ludwigson et al. showed that a single-shot ACB could improve postoperative ambulation and knee flexion duration during a period of decreasing pain, which lasted for two days (13). The ACB block can be repeated a week after the first block in order to enhance the rehabilitation program if the patient still experiences pain.

This study showed a decrease in the need for analgesic (etoricoxib) following providing the ACB procedure. Analgesic drug consumption was gradually increased after POD 17 and remained stable after POD 21. This may occur because the soft tissue was healed, and the inflammation process was subsided. Jæger et al. reported no significant difference between the ACB and placebo group concerning morphine consumption (2, 12, 14).

The use of ultrasound is mandatory when performing ACB in order to prevent complications or vascular injury (15, 16). This study revealed no significant adverse effect of the ACB procedure. We found only one complication after the ACB procedure (i.e., hematoma after injection), and it was resolved conservatively. It can be implied that the ACB procedure is safe as long as performed under USG guiding technique even in outpatient clinics. Koniuch et al. reported a massive thigh hematoma after the ACB procedure in an obese woman with a history of consuming an anticoagulant drug (apixaban). The authors suggested that regular monitoring as a conservative treatment resulted in an acceptable outcome without additional procedures (17).

Damage to the vascular during peripheral nerve block is a rare complication. The bleeding risk due to anticoagulant drug use should be considered by the operator (17-20). A recent update of American Society of Regional Anesthesia (ASRA) guidelines in 2018 recommended waiting 72 hours after the last dose of the anticoagulant drug for the block procedure (21). In our study, the patient was still on anticoagulants in the last 72 hours, and the hematoma recovered with conservative treatment and stopping the intake of anticoagulant drugs.

The current study has limitations, including not comparing other treatments and being a single-center study. Hence, the authors suggest performing multicenter prospective studies and comparing the outcomes with those of other studies.

This study demonstrated that single-shot ACB provided in an outpatient clinic is a safe procedure that could significantly reduce pain and the need for analgesic drugs. Hence, it may enhance the rehabilitation programs.

We thank the staff of Klinik Bahasa for their help during manuscript preparation.