Postoperative pain following laparoscopic cholecystectomy (LC) arises from incision sites and residual intraperitoneal CO2 gas. Opioids as a class of pain-relieving drugs are broadly used to control pain after LC; however, these drugs can cause various side effects.

The purpose of this study was to compare the efficacy of intraperitoneal injection of bupivacaine with that of intravenous ketorolac in managing postoperative pain in patients who had undergone LC.

This randomized, double-blind clinical trial was carried out on patients who had undergone LC. Ninety patients who had undergone elective LC were randomly divided into 3 groups (n = 30 for each group). Group A received 40 mL of 0.25% bupivacaine solution intraperitoneally at the end of the operation; group B received 30 mg of ketorolac intravenously 30 minutes before surgery and every 8 hours after surgery, and patients in group C received normal saline intraperitoneally and intravenous injection. The patients were postoperatively assessed for Visual Analog Scale (VAS) scores, postoperative opioid consumption, shoulder pain, side effects (sedation, nausea, and vomiting), and satisfaction. The data were analyzed using SPSS. P values < 0.05 were considered significant.

Intraperitoneal injection of bupivacaine and intravenous injection of ketorolac both are safe and effective methods to control pain, nausea, and vomiting after LC.

Laparoscopic cholecystectomy (LC), the most common abdominal surgical procedure worldwide, is the current gold standard for the treatment of cholelithiasis (1, 2). Postoperative pain is one of the major reasons for rehospitalization after surgery, as well as the chief complaint of prolonged recovery after cholecystectomy and other abdominal surgeries; in this regard, various methods have been proposed to treat them (3-6).

Opioids are the most powerful analgesic drugs in controlling and treatment of pain after cholecystectomy; however, opioid-related side effects (such as drowsiness, postoperative nausea and vomiting (PONV), constipation, and respiratory depression) lead to poor pain control and decreased patient satisfaction (7-10). To reduce the side effects of administered opioids, other methods of perioperative pain management, such as non-opioids and nerve blocks, have been considered by anesthesiologists (11-17). Intraperitoneal injection is one of the effective methods to control pain after LC (18). A number of studies reported the efficacy of intraperitoneal injection of local anesthetics following LC, while others reported their ineffectiveness (19).

Bupivacaine is the most common local anesthetic that has been used for local anesthesia after LC (20). Bupivacaine inhibits pain transmission by binding to voltage-gated sodium channels and blocking sodium entry into the cell (21). However, the optimum volume or concentration of bupivacaine to reduce postoperative pain is still unclear.

As a first-generation non-steroidal anti-inflammatory drug (NSAID), Ketorolac exerts its actions by blocking the prostaglandin synthesis by inhibiting the cyclooxygenase enzyme (22, 23). The role of NSAIDs in controlling postoperative pain after LC has been studied in several studies.

Many studies have shown that the preventive use of NSAIDs reduces the need for opioids after surgery and delays the first dose of opioids for pain management (12, 24, 25). However, the administration of NSAIDs may be associated with adverse effects such as inhibition of platelet aggregation and a higher risk of intraoperative and postoperative bleeding (26, 27).

This randomized, double-blind clinical trial was conducted at Imam Khomeini Hospital of Ardabil, Iran, from 2015 to 2017. The effects of intraperitoneal bupivacaine and intravenous ketorolac on postoperative pain were assessed after LC. Based on ASA physical status I-II, the inclusion criteria were patients between 20 to 60 years old who had undergone LC. In addition, patients with a history of hospitalization at ≤ 1 month before the study, diabetes mellitus, hypersensitivity or reaction to the drugs, besides heart diseases and dysrhythmias, PONV, gastrointestinal disorder, infectious diseases, chronic respiratory diseases, chronic renal failure, hepatitis, cancer, and long-term use of NSAIDs or opioids, were excluded from the study.

In the current study, all patients underwent LC with the general anesthesia method. All patients received the same anesthetic method. First, they received 3 - 5 mL/kg Ringer’s lactate solution. Induction of anesthesia was established by administering midazolam 20 µg/kg, fentanyl 3 µg/kg, and propofol 2 mg/kg. For muscle relaxation and tracheal intubation, atracurium 0.5 mg/kg was given. After 3 minutes, endotracheal intubation was performed with tube sizes 7.5 to 8 mm. Maintenance of anesthesia was done with propofol infusion (75 - 125 µg/kg/min) and O2 (100%).

Patients then underwent LC. All the operations were performed by 1 surgeon. At the end of surgery, patients were randomly divided into 3 groups based on a one-to-one allocation (30 patients in each group) using sealed envelopes. Group A received 40 mL of bupivacaine HCL (0.5%; Aspen Co, France) with 0.25% of concentration at the end of the operation. Group B received 30 mg of ketorolac (Caspian Tamin, Rasht, Iran) injected intravenously 30 minutes before surgery and every 8 hours after surgery. Moreover, group C (the placebo group) received 40 mL of normal saline intraperitoneally and 2 mL of normal saline intravenously. In all 3 groups, patients received patient-control analgesia (PCA) pump (Zhejiang Fert, Pouyan Tajhiz Teb of Asia Co Ltd, China). This device had 15 µg/mL bolus dosing, 15-minute lockout time, and none infusion rate with 100 mL reservoir volumes.

3.3. Variables of the Study

VAS scores express the severity of pain ranging from 0 to 10 [0, pain free; 1 - 3, mild pain (does not affect sleep); 4 - 6, moderate pain; 7 - 9, severe pain (cannot sleep or wake up because of pain); and 10, sharp pain]. PONV scores evaluate nausea and vomiting ranging from 0 to 4 (if the patient had no nausea or vomiting, a score of 0 was given, and if the patient had severe nausea and vomiting, a score of 4 was given). Moreover, vomiting was defined as forceful expulsion of gastric contents from the mouth or retching. If events of vomiting or retching were separated by more than 1 minute, they were considered as separate episodes. For cases with VAS ≥ 4, patients used fentanyl loading (bolus) doses and, if needed, followed by slowly intravenous 0.5 mg/kg meperidine injection. For cases with nausea and vomiting, 10 mg of metoclopramide was administered slowly and intravenously. Overall patient satisfaction scores (ranging from 1 to 5; 1, very dissatisfied and 5, very satisfied) were recorded 24 hours after surgery. Average opioid consumption was calculated based on the use of fentanyl and meperidine.

The results are given as mean ± SD or median and 25th - 75th percentiles. Continuous variables were compared using the Student t test. Data were compared between different groups using 1-way analysis of variance (ANOVA) with the Tukey-Kramer post hoc test or by the Kruskal-Wallis test. Analysis of variance was also used for repeated measurements. All data were processed using SPSS version 21 (SPSS Inc, Chicago, Ill, USA). P values of < 0.05 were considered significant.

The current research was performed with informed consent and ethical approval from the Ethics Committee of Ardabil University of Medical Sciences (code: IR.ARUMS.REC.1394.70). Moreover, this study was registered on the Iranian Registry for Clinical Trials website (code: IRCT201606064131N2).

The flowchart of the study is presented in Figure 1. A total of 124 patients who had undergone LC were included in the study; 24 patients did not meet the inclusion criteria and were excluded from the study, and 10 patients discontinued due to “study dissatisfaction.” The study population consisted of 90 patients (30 patients in each group), of whom 64 were female (71.11%), and 26 were male (28.89%). Demographic characteristics of the study population are represented in Table 1. There were no significant differences in age, sex, weight, ASA status (I/II), and operation time among the 3 groups at each time point (P > 0.05; Table 1). 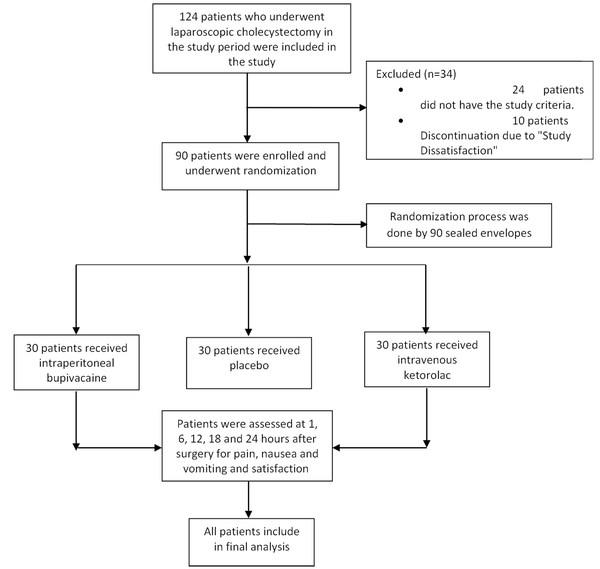 Flowchart of the study 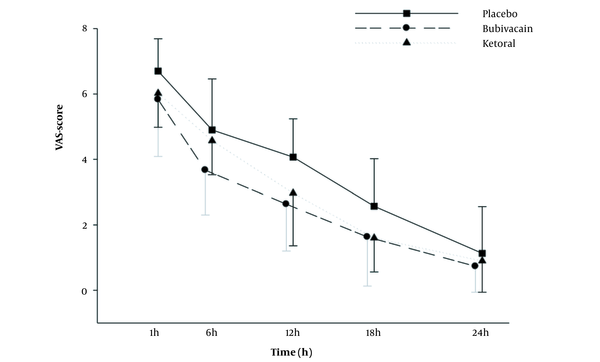 Comparison of the pain scores (Visual Analog Scale) in the experimental groups at postoperative times. Values are represented as mean ± SD. Differences between the results of the placebo group and other groups (*** P < 0.001; n = 30 for each group). 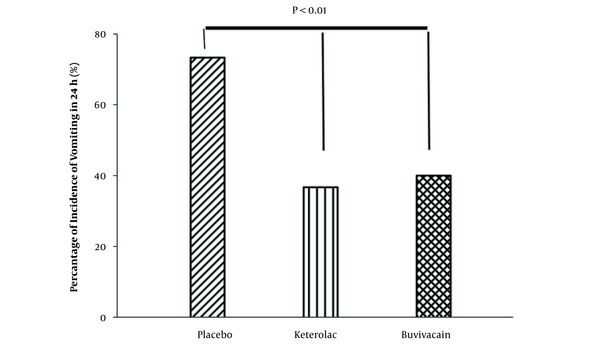 Percentage of the nausea incidence in the experimental groups 24 hours after surgery (n = 30 for each group). 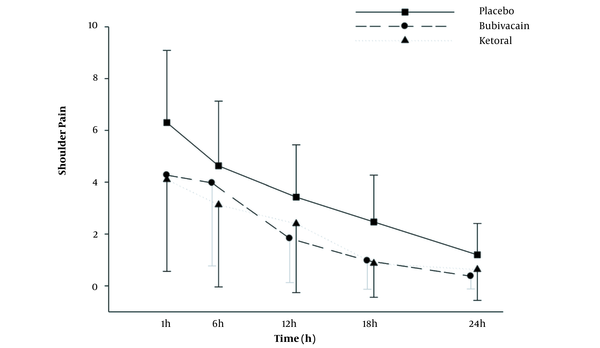 Comparison of the shoulder pain in the experimental groups at postoperative times. Values are represented as mean ± SD. Differences between the results of the placebo group and other groups (*** P < 0.001; n = 30 for each group).

Table 3. The Average Consumption of Fentanyl (µg) in the Ketorolac, Bupivacaine, and Placebo Groups 24 Hours After Surgery a 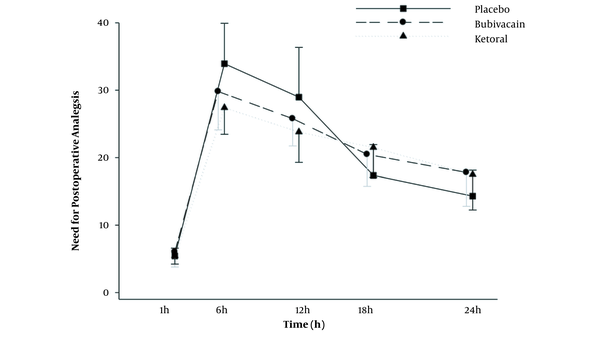 Comparison of the postoperative analgesic consumption in the experimental groups at postoperative times. Values are represented as the number of frequency. Differences between the results of the placebo group and other groups (*** P < 0.001; n = 30 for each group).

The results of patients’ satisfaction with analgesia in different groups showed that bupivacaine and ketorolac groups were highly satisfied compared with the placebo group (P < 0.001; Figure 6). There was no significant difference between bupivacaine and ketorolac groups in terms of patients’ satisfaction with analgesia (Figure 6). 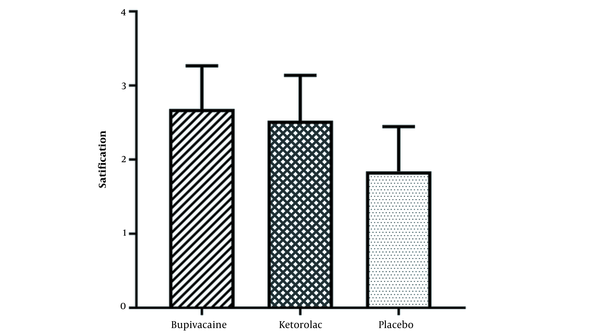 Patients’ satisfaction with analgesia in the studied groups. Values are represented as mean ± SD (n = 30 for each group).

Although opioids are frequently used for postoperative pain management, these drugs are associated with significant side effects, which can affect patients’ treatment (12, 28-30). Recently, multiple studies have been designed to produce effective pain relief to eliminate the need for opioids (31-33). The current study was conducted to evaluate the efficacy and complications of intraperitoneal injection of bupivacaine with those of intravenous injection of ketorolac in managing postoperative pain after LC. The results of the current study showed that intraperitoneal bupivacaine and intravenous ketorolac reduced pain in the surgical site and shoulder in the first 24 hours after LC compared with the placebo group; however, bupivacaine and ketorolac had no significant difference in pain relief compared with each other. In addition, according to the nausea and vomiting score, it was shown that the incidence of nausea was significantly higher in the placebo group than in the bupivacaine and ketorolac groups. Furthermore, various methods have been studied to reduce PONV in these patients (34).

Concerning the effects of ketorolac in patients with LC, various studies have indicated that ketorolac can reduce pain, which is consistent with our results (39). Our findings revealed that the rate of nausea and vomiting was lower in the bupivacaine and ketorolac groups than in the placebo group. Sharma et al. reported a 15 - 20% incidence of nausea and vomiting in the intraperitoneal bupivacaine group (18), which was lower than our study results, but Murdoch et al. reported a 59% incidence of nausea in the ketorolac group, which was higher than our study results (39).

The results of our study also showed that fentanyl consumption did not show a significant difference between the studied groups. Unlike our study, some previous studies have reported that bupivacaine and ketorolac can reduce the use of opioids in managing postoperative pain (39, 40). Various factors may be involved in this discrepancy, related to the use of fentanyl after surgery, such as sample size, duration of surgery, type of injection (intravenous with topical), site of injection (sub-diaphragm against sublingual), anesthetic solution, time of injection (before or after surgery), residual carbon dioxide volume, and dosage and type of analgesic medications (19).

The low sample size and duration of follow-up were the limitations of the present study. Accordingly, further studies with larger sample sizes are needed to confirm these results.

Intraperitoneal bupivacaine and intravenous ketorolac both are safe and effective techniques for controlling pain, reducing nausea and vomiting, and increasing the satisfaction of patients who are candidates for LC.

Copyright © 2021, Author(s). This is an open-access article distributed under the terms of the Creative Commons Attribution-NonCommercial 4.0 International License (http://creativecommons.org/licenses/by-nc/4.0/) which permits copy and redistribute the material just in noncommercial usages, provided the original work is properly cited.
download pdf 1.75 MB Get Permission (article level) Import into EndNote Import into BibTex
Number of Comments: 0