This study aimed to evaluate the quality of glycemic management during CABG in an academic center regarding peripheral blood and coronary sinus values.

The existing glycemic management protocols on the CABG patients were acceptable in our hospital. However, the BG level of the coronary sinus was higher than the peripheral one.

Nowadays, the incidence of CABG as a lifesaving intervention has been increasing worldwide (1, 2); however, there may be some intra and post-operative complications (3, 4). BG control during CABG is one of the main tasks of anesthesiologists (5). Higher fasting BG levels with intra-operative fluctuations are strong predictors of intra-and post-operative complications such as morbidity and mortality, neurologic damage, cardiac injury, surgical site infection, and longer hospital stay in diabetic and non-diabetic patients (6, 7). When BG values rise, hemoglobin molecules become glycosylated via a non-enzymatic reaction. This harmful process leads to the free radical formation (8). In this process, the administration of anesthesia drugs and insulin with proper dosage and timing, well-controlled diabetes other co-morbidities, CPB duration, and the use of inotropic agents and interventions to eliminate stress response to surgery stimulants are some of the effective factors (9-11).

This study aimed to assess the quality of glycemic control in diabetic patients undergoing on-pump CABG surgery in an academic center in the north of Iran.

This prospective-descriptive study was performed at the Dr. Heshmat Hospital, an academic center affiliated with the Guilan University of Medical Science (GUMS), in 2020.

Severe or unexpected complications changing the methods of anesthesia or surgery, patient not willing to submit their informed consent.

Arriving at the operating room, the patients underwent standard monitoring, and general anesthesia and surgery protocols were considered for these patients. BG was measured four times, before the induction of anesthesia (T0), before CPB (T1), during CPB (T2), at the end of CPB (T3), and at the end of surgery (T4). During the surgery, the surgeon took a sample from the coronary sinus and measured BG. Additionally, information addressing gender, age, BMI, ASA class, EF percentage, duration of surgery, duration of the CPB, the volume of administrated IV fluids during surgery, and urine volume at the end of surgery was also recorded. The target was to maintain BG in the range of 80 - 180 mg/dL. When BG > 200 mg/dL, a bolus of 4 units of insulin regular was administrated. For BG < 80 mg/dL, 50 mL/h of dextrose 5% was administered. BG was measured hourly using a touch glucometer, and the dosage was repeated until the reached values were < 200 mg/dL.

The data were analyzed with SPSS software version 21. Chi-square, t-test, repeated measurement test, and ANOVA analysis were also used for the data analyses. Statistically, a P < 0.05 was set as the significance level.

Table 1. Demographic Information of Patients and Surgical Characteristics a

This study revealed that the current protocols on the BG management in CABG patients provided a proper intra-operative glycemic control. The increasing trend of changes in BG values from T0 to T4, peaked in T3, was statistically significant. This finding supported the finding of a previous study suggesting the association between the severity of stress response during CABG surgery and BG values (12).

Although the mean BG concentrations were < 200 mg/dL, the mean BG values of the coronary sinus were 222.18 ± 75.74 mg/dL, which was higher than the peripheral sample values at the same measurement time point. The coronary sinus, the largest coronary vein, is formed by converging several vessels. It collects blood from the myocardium and drains deoxygenated blood directly into the right atrium (13, 14). During CABG, the anatomic feature of the coronary sinus plays a critical role as a landmark for the surgeon and an effective place to transmit cardioplegia solution to protect the myocardium (15).

As it was mentioned, the BG levels of the coronary sinus were different from peripheral samples. The exact underlying mechanism of this positive difference has not been well-understood; however, it could be due to hypothermia and cardiologic solutions containing glucose, which led to lower myocardial glucose uptake (Figure 1). Given the specific and critical function of the coronary sinus, directly representing myocardial metabolism, it is theoretically hypothesized that peripheral BG measurement alone could not be a reliable finding. However, the main goal of preoperative glycemic control would be to improve clinical outcomes. Accordingly, further studies are required to achieve practical findings and clarify the effect of coronary sinus BG on short- and long-term outcomes. It is unknown whether the intervention is necessary to correct coronary sinus BG despite proper peripheral glycemic control. A fundamental study showed that coronary sinus BG did not match peripheral sampling; hence, future studies should shed light on several unanswered questions. Previous studies have demonstrated that myocardial glucose increases due to higher coronary sinus blood flow during the increased heart work. Similar studies have indicated that when the human heart is at rest, only 20 - 25% of the myocardial glucose uptake is oxidized (16). 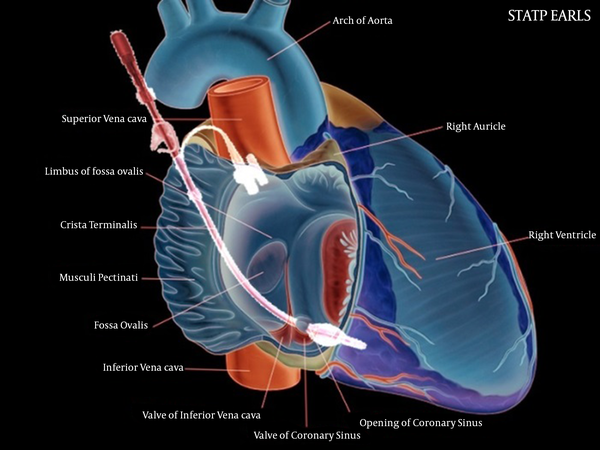 Gertz et al. found that during rest, myocardial energy needs are mainly provided by fat; hence, the BG concentrations increase. In contrast, during the heart’s function, the myocardial section mainly tends to consume glucose (17). Bergman et al. examined the myocardial glucose metabolism by measuring coronary sinus BG during pacing. They found that coronary sinus glucose concentration was significantly lower than arterial samples. Their justification was that during most of the heart’s functions, higher glucose was delivered via high coronary sinus blood flow (18). Sathya et al. detected that moderate glycemic control targeting (150 - 200 mg/dL) led to post-operative mortality and stroke reduction compared to a liberal strategy (> 200 mg/dL). However, there was no definite addition with more intensity (< 150 mg/dL) (19).

According to the existing protocols, the BG levels should be kept < 180 mg/dL, and strict control on BG < 110 mg/dL is no longer recommended (6).

In general, some studies have suggested the increased mortality rate in the CABG patients undergoing strict glycemic control protocols (20). The acceptable results of this study indicate that anesthesiologists in this hospital have a close and continuous communication with the surgeon during the critical surgery stages. A detailed physical examination is performed in preoperative visits, and medical history, including patients' medications and co-morbidities, is obtained.

These findings indicated that coronary sinus BG was higher than peripheral values. Despite the optimal control of BG based on peripheral sampling, the significance and clinical values of coronary sinus BG should be investigated. Moreover, the existing protocol in the concerned hospital was found to be acceptable. Special attention should be paid to older patients with higher ASA classes.

Copyright © 2022, Author(s). This is an open-access article distributed under the terms of the Creative Commons Attribution-NonCommercial 4.0 International License (http://creativecommons.org/licenses/by-nc/4.0/) which permits copy and redistribute the material just in noncommercial usages, provided the original work is properly cited.
download pdf 2.69 MB Get Permission (article level) Import into EndNote Import into BibTex
Number of Comments: 0