This cross-sectional blinded study included 55 pregnant females prepared for elective cesarean section. They were divided into two groups based on the incidence of PSAH: (1) cases with PSAH (26 cases); and (2) cases without PSAH (29 cases). All the cases underwent ultrasound-guided measurement of IVCCI and IJVCI. The efficacy of these parameters was assessed in predicting PSAH.

Cases in both groups expressed non-significant differences regarding demographic data. However, IVCCI had mean values of 38.27 and 23.97%, while IJVCCI had mean values of 46.50 and 33.41%, respectively, in cases with and without PSAH. For IVCCI, using a cut-off point of 33% had sensitivity and specificity (84.6 and 93.1%, respectively) for predicting PSAH, with a diagnostic accuracy of 89.1%. IJVCI had sensitivity and specificity of 84.6 and 82.8%, respectively, for predicting the same complication using a cut-off value of 38.5%.

IVCCI and IJVCI are efficacious and reliable tools in predicting PSAH in pregnant ladies undergoing cesarean section, with a slight superiority for IVCCI regarding specificity and accuracy.

Post spinal anesthesia hypotension (PSAH) is frequently encountered in the daily obstetric anesthesia practice, and its incidence has been reported to reach up to 71% (1). This consequence arises due to lower preload, resulting from the gravid uterus compressing the inferior vena cava (IVC), and decreased systemic vascular resistance occurring followed by vascular dilation following spinal anesthesia (2).

Pregnant women who suffer from prenatal hypovolemia are at an increased risk of cardiovascular collapse. Also, PSAH can lead to severe maternal and fetal outcomes. Hence, pre-anesthetic identification of the fluid deficit may help prevent the critical decrease in blood pressure during operation (3).

Recently, there have been significant advances in hemodynamic monitoring devices (4, 5). Ultrasound is a safe and easy technique used for hemodynamic monitoring (6). Multiple studies have reported the usefulness of point-of-care ultrasound performed by anesthesiologists (7). It has been reported that ultrasonography measurements of the inferior vena cava (IVC) or internal jugular vein (IJV) can be used to determine the intravascular volume.

Transabdominal measurement of IVC diameters is an easy method devoid of any complications. Based on collected diameters, the IVC compressibility index (IVCCI) can be calculated, and it is a reliable method for assessing patients' volume status (8).

There is a paucity of studies comparing IVCCI and IJVCI in the prediction of PSAH during cesarean section. Hence, we conducted this study to assess the efﬁcacy of pre-operative IVCCI and IJVCI to predict PSAH.

This cross-sectional blinded study was performed at the Obstetrics and Gynecology Department, the Tanta University Hospital, from June 2020 to November 2020. The study was designed for adult pregnant female cases whose ages ranged from 25 to 35 years; they had class I or II American Society of Anesthesiologists (ASA) physical status and were prepared for elective cesarean section under subarachnoid block. Before the study, the participants had provided informed consent.

Cases with emergency conditions and uncontrolled systemic comorbidities (cardiovascular, respiratory, or renal) and patients in whom massive intraoperative loss was expected (placenta accreta or placenta previa) were excluded. Additionally, cases who received preload of intravenous fluids were excluded.

The cases were divided into two groups based on the incidence of PSAH: with PSAH (26 cases) and without PSAH (29 cases).

The patients were hospitalized the day before surgery and instructed to begin fasting at 12:00 a.m. A thorough anesthesia examination was conducted the night before surgery when the patient arrived in the operating room. Regular hemodynamic monitoring was performed, including three-lead electrocardiography, pulse oximetry, and non-invasive blood pressure measurement.

All the patients were positioned supine, and the right IJV was checked in each case. The transducer was positioned two cm superior to the right sternoclavicular joint in the transverse plane of the neck. The IJV was detected via doppler examination, and care was made to minimize vein blockage or compression during the examination. Measurements were recorded for four respiratory cycles when the entire vein circumference was visible. Following that, the anteroposterior maximum and minimum diameters were determined. IJVCI was determined using the following equation: Maximum diameter - lowest diameter/maximum diameter) 100% (9).

The transducer was placed in a longitudinal position over the subxiphoid region. IVC measurements were estimated just distal to the entrance of hepatic veins into IVC, about 3 - 4 cm distal to the right atrium. After expiration and inspiration, internal anteroposterior IVC diameters were measured at their highest and lowest values. IVCCI was calculated via the same equation used for IJV.

Following US measurements, the cases were positioned supine, and spinal anesthesia was administered with 2.5 mL hyperbaric bupivacaine 5% and 20 mcg fentanyl into the L 2 - 3 or L 3 - 4 intervertebral space using a 25-gauge B-braun needle after confirming free flow of cerebrospinal fluid (CSF). Simultaneously, all the patients received a co-load of ringer lactate solution (10 - 12 mL/kg over 15 minutes). When the sensory block reached the T6 level, surgery was initiated.

Throughout the process, the heart rate and mean arterial pressure (MAP) were recorded (every 3 min for the first 15 min). Ephedrine (6 mg increment) was used in addition to Ringer lactate solution to treat hypotension, defined as a decrease in MAP of more than 20% of its basal value or MAP 65 mmHg (250 mL bolus). The ephedrine dosage was recorded. Bradycardia, defined as a heart rate less than 50 beats per minute, was treated with an intravenous infusion of atropine (0.6 mg).

This study aimed to determine the predictive values of IVCCI and IJVCI in identifying PSAH. The secondary objective was to compare these two prediction values.

Data entry and analysis were performed using SPSS software version 25 for Mac for data entry and analysis. At first, data were tested for normality. Quantitative data were expressed as mean and standard deviation, whereas frequency and percentage were used to express categorical variables. The chi-square test was performed to compare two independent groups of qualitative data. Also, the Mann-Whitney U test and independent samples t-test were used to compare the two groups of non-parametric and parametric quantitative data. Receiver operating characteristic (ROC) curve analysis was also performed to show the diagnostic accuracy. P-value < 0.05 was considered significant.

Regarding demographics, cases with and without PSAH had mean ages of 26.46 and 25.62 years and mean BMI values of 29.64 and 29.4 kg/m2, respectively. Most of the included cases had ASA class I (84.6 and 89.7% of cases in the two groups, respectively), and the remaining cases had ASA class II. Neither of the previous parameters was significantly different between the two study groups (P > 0.05) (Table 1).

Table 1. The Patients’ Demographics According to PSAH Occurrence a, z

There was no significant difference between heart rate readings in both groups apart from the 6-min reading, which was significantly higher in cases with PSAH than in those without PSAH (P = 0.04). However, cases tended to express higher heart rates in the PSAH group than in the other group, although statistically insignificant. When it comes to blood pressure, although blood pressure was significantly decreased in 26 out of the included cases, no significant difference was noted between the two groups regarding the baseline reading (P = 0.857) (Table 2). 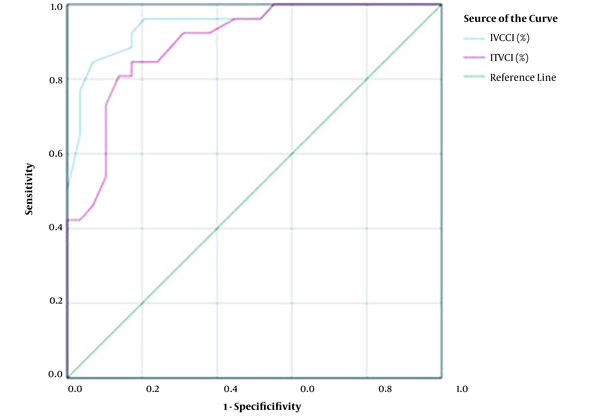 Although PSAH is usually well tolerated by healthy subjects, as patients only complain of nausea, vomiting, and lightheadedness, it may significantly impact patients with preexisting cardiovascular risk factors (10). The ability to predict which patients are at high risk of severe hypotension should enable anesthetists to prepare and individualize treatment for such cases (11).

PSAH was encountered in 26 of the cases (47.27% incidence). Another study reported a high incidence, as PSAH was detected in 23 out of 40 included cases (57.5%) (4). A previous report stated that the incidence of PSAH hypotension varied between 7.4 and 74.1% in different series (11). The main reason for this discrepancy lies in the difference in the definition of hypotension between studies.

The subjects were classified into two categories based on PSAH prevalence: (1) with PSAH, and (2) without PSAH. By and large, no significant variation in demographic factors was seen between patients in the two groups, which should eliminate any bias that may have skewed the results in favor of one group over the other.

IVCCI is a straightforward and accurate predictor of fluid receptivity in both normal and mechanically ventilated patients, according to many studies (13-17). In a previous randomized controlled trial, IVCCI guided fluid therapy was associated with a 35% reduction in the incidence of PSAH (18).

In the present study, cases with PSAH had significantly higher IJVCI than those without PSAH P < 0.001). IJVCI had mean values of 46.5 and 33.41% in both groups, respectively. With a cut-off value of 38.5%, IJVCI had sensitivity and specificity of 84.6 and 82.8%, respectively, in predicting PSAH.

Unluer and Kara reported that IJVCI was a useful marker in predicting hypovolemia. It had median values of 32.74 and 38.88% before and after blood donation, respectively. Blood donation results in hypovolemia, which is reflected in IJV collapsibility (22).

Our results showed that both IVCCI and IJVCI could be used as reliable markers to predict PSAH occurrence, with a slight superiority for IVCCI (AUC = 0.950 and 0.898 for IVC and IJV, respectively). In line with our results, Brolio and his associates reported that IVC diameter changes were a marker for fluid responsiveness. Furthermore, Prekker et al. found a good relationship between the maximum IVC diameter and the internal jugular aspect ratio (23). Therefore, if one technique is reliable, the other will also be dependable.

Either technique is recommended to evaluate patients for whom hypotension would form a potential risk. Anesthesiologist experience in ultrasonography will play a role in setting the preferred technique together with center policy and patient characteristics. For instance, IVCCI would be harder to assess in obese individuals or cases with excess intraabdominal gases (9), and it would be easier for anesthesiologists to calculate IJVCI. Junior anesthesiologists should start learning IVC as they are more familiar with this anatomical area and the sonographic view based on their everyday experience in ultrasound-guided central catheter installation. IJV should provide an additional advantage as it requires less image acquisition time than IVC, as reported by previous authors (20).

Our study had a number of limitations. First, it was a single-center study that included a relatively small sample size. Therefore, more studies, including more cases, should be conducted in the future. Second, those with sensory blocks higher than T4 were excluded from the study.

IVCCI and IJVCI are efficacious and reliable tools in predicting PSAH in pregnant ladies undergoing cesarean section, with a slight superiority for IVCCI regarding specificity and accuracy. A greater collapsibility index leads to a lower volume status.

Copyright © 2022, Author(s). This is an open-access article distributed under the terms of the Creative Commons Attribution-NonCommercial 4.0 International License (http://creativecommons.org/licenses/by-nc/4.0/) which permits copy and redistribute the material just in noncommercial usages, provided the original work is properly cited.
download pdf 263.30 KB Get Permission (article level) Import into EndNote Import into BibTex
Number of Comments: 0