Evaluating the Relationship Between Acute Pain Perception and Gut Microbiota Among Female University Students in Japan: A Prospective Cohort Study

The gut microbiota (GM) plays an important role in gut-brain communication, and the ‘gut-brain axis’ has attracted much attention as a factor influencing human host health. We previously reported that pain perception may be associated with GM composition in males. The aim of this study was to investigate the relationship between GM composition and pain perception among 42 healthy female university students in Japan. Pain perception was evaluated by pressure pain threshold (PPT), current perception threshold (CPT), temporal summation of pain (TSP), conditioned pain modulation (CPM), and a questionnaire on psychological state. CPT was stimulated at 5, 250, and 2,000 Hz, which reflected the thresholds of the C, Aδ, and Aβ fibers, respectively. Also, GM composition was estimated using 16S rRNA analysis. The lower alpha diversity was associated with, the lower PPT (rs = 0.330, P < 0.05) and CPT of 2000 Hz (re = 0.339, P < 0.05). Furthermore, alpha diversity was identified as an explanatory variable for PPT (β = 0.424, P < 0.01) and TSP (β = -0.317, P < 0.05), alpha diversity and state anxiety for CPT of 2000 Hz (β = 0.321, P < 0.05), and state anxiety for CPT of 250 Hz (β = 0.320, P < 0.05). However, there was no relationship between the rate of major phylum and pain perception.

The gut microbiota (GM) has a variety of influences on the health status of the host human (1). Also, it can be hypothesized that the GM may influence pain processing and perception. Several human and animal studies supporting this hypothesis have been conducted (2-5). Although these studies have reported the relationship between GM composition and disease characteristics, that was different from that of healthy controls, there were no reports about the relationship between pain perception and GM composition. We previously investigated this issue in healthy young males and reported that pain perception may be related to GM composition (5). However, no gender-based differences in the composition of GM has been reported (6).

Psychological factors are also involved in pain processing and stress. Mood and pain are interrelated, and it has been reported that patients with fibromyalgia have a higher prevalence of mild to moderate depression and anxiety (7). Moreover, psychological conditions such as anxiety and depression are associated with GM composition (8).

In our previous study conducted on males, pain perception showed a relationship with GM composition, but not with psychological factors (5). However, a higher number of females suffering from depression is both a universal and substantial trend (9).

This study aimed to investigate the relationship between GM composition and pain perception in females by adding psychological factors as a secondary outcome.

This prospective cohort study was conducted on Japanese females, and it was approved by the Nagoya Gakuin University Board of Ethics (No. 2016-27).

The subjects of this study were 42 healthy females. The inclusion criteria were being at least 20 years old and having no ongoing pain or diseases. The exclusion criteria were people diagnosed with and treated for chronic diseases, those with active serious psychiatric disorders, those receiving drugs (e.g., analgesics or antibiotics), menstruating, pregnant, or lactating. Two subjects were excluded from the study due to menstruation. All participants signed an informed consent form.

We used a pressure algometer (Digital Force Gage, AIKOH, Japan) to collect PPT. The site tested for PPT was the right dorsal forearm. The participants were asked to respond to the first onset of pain from the pressure applied, and the corresponding algometer force (newton) was recorded.

CPT was measured using a Neurometer® (Neurotron, Inc., USA). This device can produce frequencies of 2000, 250, and 5 Hz to selectively stimulate Aβ, Aδ, and C fibers, respectively. Measurements were recorded in the palmar of the pollicis at each frequency.

TSP was assessed by applying a mechanical pressure stimulus of 0.5 Hz to the dorsal forearm of the dominant arm for ten consecutive times. The intensity of the pressure stimulation was 1.25 times that of PPT. The participants rated the intensity of pain felt for each of the ten pressure stimuli on the visual analog scale (VAS), and the total change in the VAS was used as the TSP value.

The paired-end reads of the partial 16S rRNA gene sequences were clustered by 99% nucleotide identity, and then assigned taxonomic information using Greengenes through QIIME 2 pipeline (version 2019.4)

Since a previous study on males found a relationship between pain perception and the rate of major phylum (Bacteroidetes, Firmicutes, Actinobacteria, and Proteobacteria) carriage (5), we focused on the same four major phylum in the present study. In addition, we added the analysis of alpha diversity (Shannon index), which has been reported to be associated with various chronic pain diseases (10, 11).

First, we used GPower software to determine the sample size. The effect size was set at 0.50 based on the correlation coefficient between PPT and Bacteroidetes levels in our previous study (5). To show a significance level of 0.05 (α = 0.05) and a power of 95% (β = 0.05), a minimum of 42 subjects would be required.

All data were analyzed using SPSS version 26 (IBM, USA). The Shapiro-Wilk test was used to investigate whether the data were normally distributed. The correlation between each outcome was analyzed using Spearman’s rank correlation coefficient. Subsequently, a stepwise multiple regression analysis was performed using the Z-scores calculated from each measurement. We used the GM composition and psychological state as the explanatory variables due to their correlation with pain perception. In addition, we used pain perception as the objective variable in our multiple regression analysis. A P-value < 0.05 was considered statistically significant. 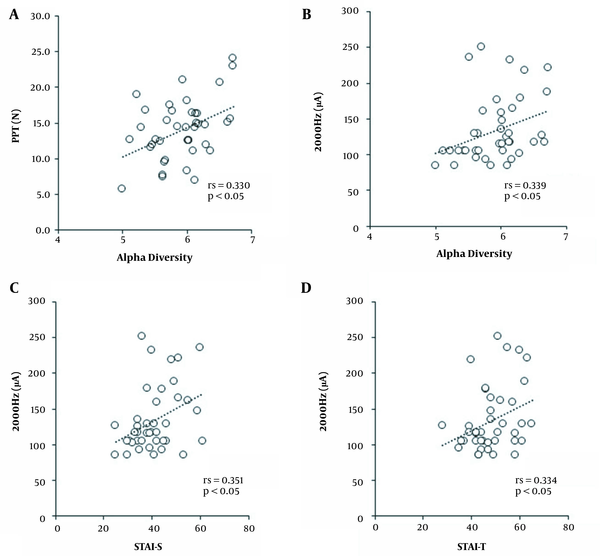 The relationships between pain perception and GM composition in females showed that lower alpha diversity may be associated with lower PPT and CPT of 2000 Hz, indicating a higher sensitivity to mechanical pain and Aβ fibers. It is very interesting to note that Bacteroidetes and Firmicutes, which were found to be related to pain perception in a previous study on males (5), were not related to that in females. However, the previous study on males analyzed GM composition using QIIME1, which could not be directly compared to the present study because different analysis methods were used, and the alpha diversity was not measured.

High GM diversity is associated with good health (12), and Shannon diversity is one of the most common measures of GM diversity. Researchers have reported reduced alpha diversity in chronic widespread musculoskeletal pain (WAD) patients and in male patients with chronic pelvic pain syndrome compared to healthy subjects (10, 11). Fecal microbiota transplantation in patients with irritable bowel syndrome was reported to reduce abdominal pain and increase alpha diversity in these patients (13). However, these studies did not show a relationship between pain itself and GM diversity. This study may be the first to show that there is a possible relationship between pain sensitivity and the diversity of gut bacteria in young females.

The results of multiple regression analysis showed that high alpha diversity may be a predictor of reduced mechanical pain sensitivity. Also, low alpha diversity may be a predictor of high TSP, and psychological factors were not involved in these associations. TSP is an indicator of central sensitization, and increased TSP was associated with the development and maintenance of painful conditions in several clinical situations (14, 15). Therefore, the results of this study were significant because a decrease in alpha diversity might have an impact on the occurrence and persistence of pain. On the contrary, reduced alpha diversity was associated with lower pain sensitivity, as chemotherapy-induced mechanical hyperalgesia was reduced in germ-free mice and the mice pretreated with antibiotics (16). Since some animal studies have reported contradictory results, the relationship between alpha diversity and pain perception needs to be carefully interpreted.

Previous studies have reported that as anxiety increases, the intensity of pain increases (17), which seems to contradict the results of the present study. However, most of these reports have been conducted on patients with chronic pain, and there are very few reports showing the relationship between pain sensitivity and anxiety in healthy subjects.

There were several limitations in this study. Firstly, we measured only the major phylum and alpha diversity, thus requiring a detailed evaluation of the GM composition. Secondly, as this study was conducted only on healthy young adults, it is necessary to include other groups of adults in future studies. Thirdly, it is necessary to investigate not only the relationship between GM composition and pain perception, but also the relationship with spontaneous pain in patients.

The authors would like to express their gratitude to M. M. for his assistance as language editor.