The current prospective randomized controlled trial investigated 60 females scheduled for unilateral MRM under general anesthesia. The participants were randomized into two groups, namely a single-shot ESP block (n = 30) and a PECS-II block (n = 30). The ESP block was conducted at the level T4 using an in-plane approach. A volume of 20 ml of bupivacaine 0.25% was administered in both blocks. The outcome measures were total morphine consumption, analgesia duration, postoperative pain intensity, and nausea and vomiting.

More ESP participants required rescue morphine analgesia than those in the PECS group (P = 0.028). The ESP group showed significantly higher total morphine consumption (P = 0.005) and a shorter time to request analgesia (P = 0.003). Pain intensity was higher in the ESP group 1, 2, and 6 hours after the surgery.

The PECS-II block is more effective in postoperative pain control after breast cancer surgery than the ESP block. It also prolongs the duration of analgesia and reduces the need for morphine 24 hours after the surgery.

Surgical procedures in the thoracic region mostly cause substantial acute pain that can predispose individuals to develop chronic postsurgical pain (1). Therefore, numerous anesthetic modalities have been tried to diminish the associated postoperative pain and discomfort and limit the use of opioids postoperatively (2). Currently, regional anesthetic techniques, such as thoracic epidural (TE) and paravertebral (PV) blocks, are the mainstay analgesic techniques in breast cancer surgery. However, technical shortcomings might complicate such techniques, including pneumothorax, nerve damage, and vascular puncture (3). Ultrasound guidance allowed the development of other alternatives as interfascial plane blocks (4, 5).

One of these techniques is the pectoralis (PECS) block, which entails local anesthetic (LA) injection into the interfascial plane between the PECS minor and serratus anterior (SA) muscles (6). It delivers analgesia to the anterolateral chest and breast. The PECS block has been successfully used for breast surgery (7, 8). More recently, Forero et al. described a novel block method known as the erector spinae plane (ESP) block (9). Previous studies reported its use in postoperative analgesia in various surgical procedures (10-12), including breast surgery (4, 13, 14). The ESP block is claimed to prevent somatic and visceral pain (9, 15, 16).

This study hypothesized that the PECS block might be more effective in pain control after modified radical mastectomy (MRM) as it blocks median and lateral pectoral nerves involved in postmastectomy pain. This study compared the analgesic efficacy of the ultrasound-guided ESP block and PECS-II block in patients subjected to unilateral MRM.

Following a prospective randomized controlled trial design, this study was performed at the Department of Surgery of the National Cancer Institute (NCI), Cairo University, Egypt, from January 2020 to August 2020. This study included 60 adult females scheduled for unilateral MRM with axillary lymph node dissection. The principles of the Declaration of Helsinki (1964) and its following revisions were implemented at all stages of the study. The research protocol was approved by the Institutional Review Board of the NCI (approval No.: 201920008.2P, on January 19, 2020) and registered on ClinicalTrials.gov (Identifier: NCT04284124). The inclusion criteria were unilateral MRM, an age range of 18 - 65 years, and American Society of Anesthesiologists class I or II. The exclusion criteria were body mass index > 35 kg/m2 (obese), sensitivity to the intervention drugs, coagulopathy, any skin infection at the needle puncture site, a recent history of receiving opioid drugs, hemodynamic instability, and refusal of the study procedures.

Written informed consent was obtained after providing a detailed description of the study protocol. All participants were trained about how to rate the pain using a numerical rating scale (NRS) ranging from no pain (score of 0) to worst imaginable pain (score of 10). After securing an intravenous (IV) line, all patients were premedicated with midazolam at 0.02 mg/kg. Simple randomization using computer-generated random numbers was performed to allocate the patients into one of two groups. The allocation process was managed by a team member not involved in the study. The same team member arranged opaque envelopes with the intervention type. A few minutes before the block, these envelopes were opened. The patients in the ESP group received a single-shot ESP block, and the rest received a PECS-II block. Standard monitoring was performed for all patients before blocks, including noninvasive blood pressure, electrocardiogram, and pulse oximetry.

As described by Chin et al., 20 minutes before the induction of general anesthesia, the patients were asked to follow a prone position; then, the ESP block was performed unilaterally (16). The skin was prepared with 10% povidone-iodine. The ultrasound machine used was SonoSite M-Turbo© Ultrasound System (FUJIFILM Sonosite, Inc., USA) with a high-frequency linear probe. The block was performed at the level T4 following an in-plane technique. The probe was administered 2 - 3 cm laterally to the spine using a sagittal approach. After the identification of the erector spinae muscle and the transverse processes (TPs), 2 mL of 1% lidocaine was infiltrated. Then, the block needle [18 G × 200 mm (CHIBA needle, Üretici Firma, Turkey)] was inserted deep into the muscle and directed in a craniocaudal direction. When the needle tip position was considered correct using 0.5 - 1 mL of the LA, 20 mL of 0.25% bupivacaine was injected.

As described by Blanco et al., 20 minutes before the administration of general anesthesia, the block was performed unilaterally under standard monitoring (6). All patients were asked to follow the supine position with the ipsilateral arm abducted and externally rotated and the elbow flexed 90º. Noteworthy, the skin was sterilized. The axillary artery and vein were identified. The probe was turned inferolateral until the two PECS muscles (major and minor) and the SA muscle were observed in one plane. The needle was interested in the interfacial plane between the major and minor muscles of the PECS. Then, 10 mL of bupivacaine 0.25% was injected. The probe was moved laterally and caudally toward the anterior axillary fold parallel to the deltopectoral groove until the serratus muscle slips appeared underneath the PECS minor attached to the underlying ribs. The third and fourth ribs and the pleura were identified. After the infiltration of the skin with lidocaine 1%, the needle was advanced, targeting the plane between PECS minor and serratus muscles at the level of the third rib; then, 20 ml of bupivacaine 0.25 % was injected.

In all patients, an anesthesiologist blinded to the block technique assessed sensory block levels from T1 to T8, compared to the unblocked contralateral side, using a pinprick test after 20 minutes. The blocks that were not effective after 30 minutes of LA administration were rejected (i.e., the patient was excluded).

Anesthesia was induced using fentanyl (1 µg/kg), propofol (2 mg/kg), and cisatracurium (0.15 mg/kg) and maintained using sevoflurane 2% in O2 and supplemental doses of IV cisatracurium (0.03 mg/kg), as indicated by peripheral nerve stimulator by the appearance of the second twitch of the train of four (TOF). Those cases whose mean arterial blood pressure and/or heart rate were higher than the baseline by 20% received additional bolus doses of fentanyl 0.5 µg /kg. All patients received mechanical ventilation at an appropriate condition that kept end-tidal CO2 at 30 - 35 mmHg. The participants who developed hypotension received 0.9% normal saline and/or 5 mg ephedrine in incremental doses. The reversal was administered when the TOF ratio was equal to 0.7. In addition, full awake extubation was performed. The next step was hospitalization at the postanesthesia care unit (PACU). Paracetamol 1 g/100 mL IV infusion was administered every 8 hours and ketorolac 30 mg every 12 hours.

The pain level of the patients hospitalized at the PACU was assessed immediately after the surgery and 1, 2, 6, 12, and 24 hours after extubation using the NRS by a nurse blinded to the study group of patients. All subjects received 3 mg IV morphine in case of NRS > 3, repeated if needed until NRS < 3. Metoclopramide 10 mg/8 hours was used to treat nausea or vomiting.

The total volume of morphine administered the first 24 hours after the surgery was calculated as the primary outcome measure. In addition, analgesia duration, postoperative pain intensity, and postoperative nausea and vomiting frequency were considered the secondary outcomes.

A previous study (17) reported a difference in total morphine consumption of 2.2 mg with a pooled standard deviation of 1.5. Based on these results and considering an alpha level of 0.05 and a power of 0.9, for an equivalence test of means in a parallel-group design, a sample of 46 cases, 23 in each group, was necessary to show the difference. For accommodating multiple secondary outcomes and using nonparametric tests, 30 patients in each group were enrolled in the study. The sample size calculation was estimated using PASS software (version 15; NCSS, Kaysville, Utah, USA). 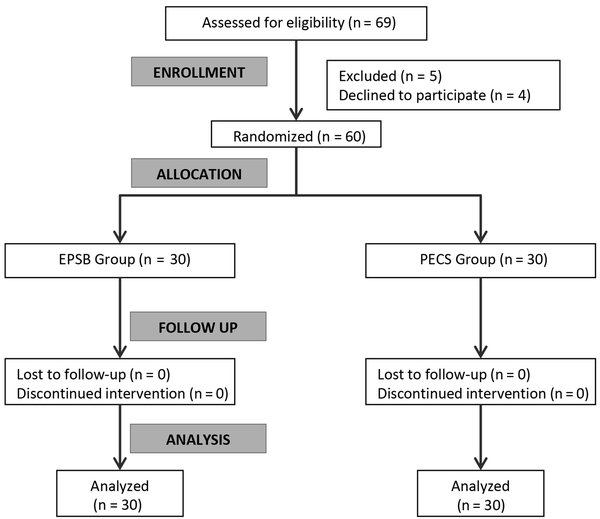 b Calculated for 11 and 5 patients in the EPS and PECS groups, respectively.

This study demonstrated that the PECS block provided lower postoperative opioid consumption, shorter time to request rescue analgesia, and less severe pain intensity than the ESP block in females subjected to breast cancer surgery. Lower pain intensity continued for 6 hours after the surgery; then, the two techniques showed a comparable pain severity up to 24 hours after the surgery.

Forero et al. developed the ESP block in 2016 as a paraspinal fascial plane block entailing the LA injection into the plane beneath the erector spinae muscle and to the tips of the TPs (9). The ESP block is introduced as a safer alternative to TE anesthesia and PV block to avoid pleural injury due to using the TP as a barrier (18). After injection at the level of T4, a craniocaudal spread of LA provides a multidermatomal sensory block. Thus, ESP can deliver analgesia for abdominal or thoracic surgery (19). The LA also spreads to the thoracic PV space via the costotransverse foramina. Therefore, it can block spinal nerves’ dorsal and ventral rami (20).

The PECS block is another fascial plane block suggested as a safe and effective alternative to neuraxial analgesia of the upper anterior chest wall (21). In the PECS I block, LA is deposited between the PECS major and minor muscles, blocking the medial and lateral pectoral nerves. A deeper injection between the PECS and the SA muscles designates the PECS-II block (6). There are reports indicating the successful administration of PECS blocks for analgesia in cases undergoing breast cancer surgery (22). In a recent study on a group of transgender patients subjected to mastectomy, the ultrasound-guided PECS-II block was superior to the intercostal nerve block in the reduction of postoperative pain and opioid consumption within 24 hours (23).

The two techniques (i.e., ESP and PECS blocks) were expected to provide similar clinical efficacy due to the matching area covered by either block. However, the current study results revealed better analgesic effectiveness of the PECS-II block. Previous studies reported similar results in breast surgery (13, 24) and other types of surgical procedures (25).

The inferior efficacy of the ESP block, compared to that of the PECS block, might be explained by the variable spread of LA in the former, as indicated in previous cadaveric studies. Adhikary et al. (19) verified dye spread between 5 to 10 intercostal spaces, from 2 to 5 to the epidural space, and 2 to 3 to the intercostal foramina. A more recent and more extensive cadaveric study compared two volumes of dye (i.e., 10 and 30 mL). The superior costotransverse ligament was stained only in 3 of 7 cadavers at the level T3 and one at the T2 level after injecting 30 mL of the dye (28). On the other hand, the PECS-II block directly blocks most of the nerve supply of the breast, including pectoral, intercostobrachial, long thoracic, 3 - 6 intercostals, and thoracodorsal nerves (29).

It can be concluded that the PECS-II block is more effective in postoperative pain control after breast cancer surgery than the ESP block. It also prolongs the duration of analgesia and reduces the need for morphine 24 hours after the surgery.