Pulmonary hypertension (PH) is elevated blood pressure in the pulmonary arteries. It is a severe situation that can injure the right side of the heart. The walls of the pulmonary arteries become thick and stiff and cannot expand sufficiently to allow blood flow. PH is a progressive sickness caused by heart, lung, or systemic diseases, leading to increased mortality and morbidity regardless of its etiology (1). It is more common in young female adults aged 30 - 40. This pathologic disorder in progressive conditions results in right-sided heart failure and severe dyspnea (2). PH is divided into primary and secondary categories. Primary pulmonary hypertension is an idiopathic hypertensive vasculopathy ultimately affecting the pulmonary circulation. Secondary pulmonary hypertension is associated with a contributing underlying disease process, such as left heart disease, chronic lung disease, hypoxia, chronic thromboembolic PH (CTEPH), and PH owing to unclear or multifactorial mechanisms (3).

Causes of PH in cardiac surgery are (1) Preoperatively due to valvular heart disease, (2) After cardiopulmonary bypass (CPB) due to pulmonary mechanical failure or reperfusion syndrome (CPB can increase resistance and pressure in the pulmonary arteries) (4), and (3) Postoperatively secondary to the valvular patient-prosthetic-mismatch (5).

PH occurs more frequently in children and is three times more common in women than in men (6). PH treatment is surgical (atrial septostomy and lung or heart-lung transplant) and pharmacological (pulmonary vasodilators, guanylate cyclase stimulators, endothelin receptor antagonists, high-dose calcium channel blockers, and warfarin). The pulmonary vasodilators, such as nitroglycerin or sodium nitroprusside, phosphodiesterase inhibitors, prostacyclin, and prostacyclin analogs as intravenous (IV) or inhaled, could be used during the perioperative period (4).

Milrinone is one of the most widely used phosphodiesterase inhibitors in open-heart surgery for PH management. It is usually administered intravenously, principally during weaning off from CPB (7, 8). This inhibitory effect is associated with increased intracellular ionized calcium and contractile strength of heart muscle (9). A significant disadvantage of the IV administration of milrinone is systemic hypotension (10). In order to reduce the complications of hypotension caused by the IV administration of this medication, inhaled administration can be used (11). In this route of drug administration, high local concentrations are achieved because of rapid absorption and high bioavailability (11). A protective effect against augmented PH in patients undergoing on-pump cardiac surgery by inhaled milrinone results from reduced CPB-associated inflammation (12), diminished pulmonary endothelial dysfunction, and enabling weaning off from CPB as the effects of inodilators (13). The beneficial effect of inhaled milrinone in reducing pulmonary hypertension has recently been established in RCTs. However, its effectiveness in separating from CPB and preventing right ventricular (RV) dysfunction has not yet been determined (14).

This study compared the effects of nebulized versus IV administration of milrinone on reducing pulmonary arterial pressure in patients with pulmonary hypertension who are candidates for open-cardiac surgery.

Block randomization was performed to assign the participants to treatments. In the randomized block method used in this study, first, we formed two groups DM (case) and D (control). Next, according to the number of patients, we determined how many patients would be randomized. The total number of samples specified for the two equal groups of intervention and control was entered into the software on sealedenvelope.com. This software randomly determines which group A or B the references are randomly assigned to each day. For example, randomization for one day was AAABBBABBA and the next day was BBABABABAA. Note that each block has five As and five Bs, maintaining a balance of the two despite the random order. This software calculates and determines the order of placing A and B based on the factorial and the number of people in each block. This study was conducted in a double-blind design, and the patients and investigators were blinded. The same surgeon and anesthesiologist performed all procedures.

The sample size of this study was calculated using the sample size estimation formula and based on the previous study (10). The 95% confidence interval (CI) level was considered. The study population consisted of 32 patients and 16 patients in each group.

Premedication was managed according to the local practices (0.1 mg/kg of morphine and 0.025 mg/kg of IM diazepam). Standard monitoring was performed in the operating room, including electrocardiogram, non-invasive blood pressure (NIBP), invasive blood pressure by radial artery cannulation, and pulse oximetry (SpO2). General anesthesia was induced with etomidate (Lipuro, B. Braun, India) 0.2 mg/kg, midazolam (Caspian Tamin, Iran) 0.25 mg/kg, sufentanil 0.3 μg/kg, and cisatracurium 0.5 mg/kg. Anesthesia was maintained with Sevoflurane 1% (Piramal Critical Care, USA) in 50% oxygen, 2 μg/kg/h of fentanyl, 0.2 mg/kg/h of midazolam, and 0.2 mg/kg/h of cisatracurium. End-tidal CO2 was retained in the 30 - 40 mmHg range, and arterial pH was maintained at 7.4 ± 0.02 for all patients. After anesthesia induction, the baseline hemodynamic profiles and transesophageal echocardiography exam (TEE) were performed.

Patients were randomly allocated to the nebulize milrinone (n = 16) and intravenous milrinone (n = 16). The surgical repair of the cardiac defect and the cross-clamp of the aorta opening was completed. Afterward, in group A, patients received nebulized milrinone (milrinone lactate 1 mg/mL, Pharmaceutical Partners of Canada Inc., Richmond Hill) by a jet nebulizer (Ref 8901, Salter Labs, Arvin, CA) attached to the inspiratory limb of the ventilator with a bypass flow of oxygen at 15 L/min (50 - 80 μg/kg) with a closed endotracheal tube, dissolved in 5 mL normal saline. Patients in group B received milrinone 50 μg/kg IV bolus, followed by the continuous administration of 0.5 μg/kg/min, immediately before trying to wean off from CPB. After medicine administration (nebulized or IV), weaning off from CPB was started. This process was based on the CVP protocol (13). Infusion of 5 μg/kg/min of dobutamine was started before CPB weaning off, which was augmented up to 10 μg/kg/min according to the patient’s response. According to the patient’s response, if the MBP during weaning off CPB could not be more than 50 mmHg, an epinephrine infusion was added at a dose of 0.05 μg/kg/min, which was augmented up to 0.1 μg/kg/min. At the end of the surgery, participants were moved to the cardiovascular intensive care unit (CV ICU). Patients were extubated when the weaning criteria emerged. The weaning criterion was based on applying mechanical ventilation weaning predictors after elective cardiac surgery (15).

Patients’ demographic data were reported as a percentage or mean ± standard deviation (SD). Hemodynamic variables were evaluated by the Student’s t-test. One-way analysis of variance (ANOVA) was used to evaluate variations over time within each group. To compare the groups at T1 (baseline values), T2, T3, and T4, a two-way analysis of covariance (ANCOVA) were used. The SPSS version 19 (Armonk, NY: IBM Corp) was used for statistical analyses. P-value < 0.05 was considered statistically significant. 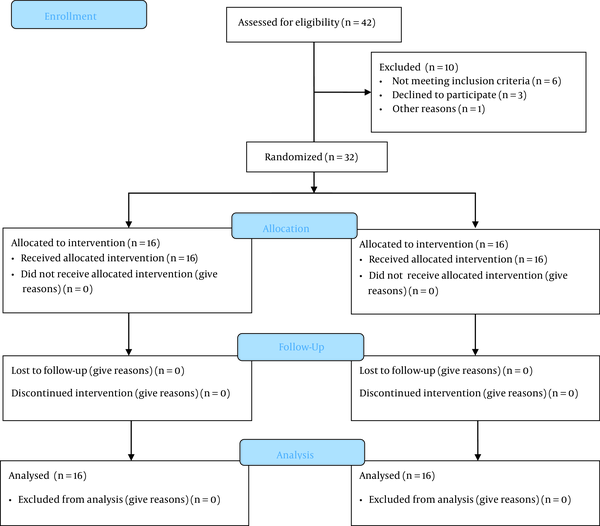 Table 2. Hemodynamic Variables Within Groups a, b

Table 3. Hemodynamic Variables in Groups a, b 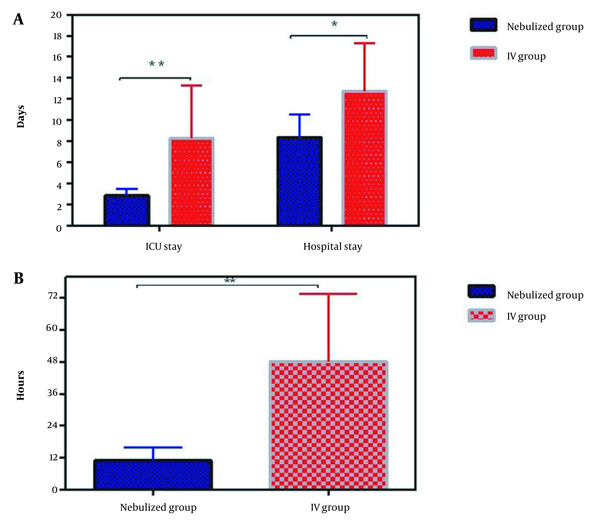 The management of pulmonary hypertension in patients undergoing open-heart surgery has a major impact on patient prognosis, mortality rate, and factors influencing cardiac surgery. These factors include reduced CPB separation time, more stable hemodynamics, and reduced length of hospital stay. Our main aim in this study was to evaluate the effect of an inhaled form of milrinone versus its IV administration at the opening of the aortic clamp in patients with pulmonary hypertension who were candidates for open-heart surgery. Numerous studies have investigated this medication in patients undergoing open-heart surgery, most of whom received the medicine at the time of surgery. Our study showed more stable hemodynamics (higher MAP, lower mPAP, and higher MAP/mPAP ratio) in the nebulized group compared to the IV group. The latter finding differed from previous studies at the time of administration (17-19).

Despite unfavorable pulmonary hypertension at the time and before surgery in both groups, after administering the medication in the nebulized group, 75% did not need inotropes. All patients who received inotropes returned to CPB. Wang et al. evaluated inhaled and IV forms of milrinone before surgery in patients with pulmonary hypertension. Their results revealed a significant decrease in mPAP in both groups, while in the inhaled administration group, the reduction in MAP was significantly higher (17). A significant decline in PVR in Milrinone nebulization group in the recent study was explained the reason for further reduction in pulmonary hypertension in the nebulization group of the study by Wang et al. This may be due to the long-term effect of inhaled medications, better distribution of the medicine in the lung tissue, further increase in tissue uptake, and the alteration of medicine pharmacokinetic compartments. Denault et al. assessed the administration of inhaled and IV milrinone before surgical incision in patients with pulmonary hypertension undergoing cardiac surgery. They showed no significant effect on systemic hypotension, PAP, and PVR (20).

Denault et al., in another study on placebo-administered inhaled milrinone in patients with cardiac PH surgery, found that inhaled milrinone could raise CO and diminish systolic PAP (P = 0.04). In addition, without reducing systemic arterial blood pressure or heart rate, the MAP/mPAP ratio was more than 20% (21). This finding justifies the stability of milrinone inhalation in our study. In the meta-analysis by Rong et al., the effectiveness of inhaled and IV milrinone in adult heart operation was studied. They found that Iv milrinone was associated with a lower MPAP, lower PVR, and higher CI compared to placebo (22).

Lamarche et al. demonstrated that a single dose of milrinone inhalation before and after CPB onset reduced CPB returns by 3% and 23%, respectively (23). In our study, the inhaled form diminished the rate of return to CPB at a higher rate than the venous form at the start of the pump. Ibrahim et al. investigated the patients with CHD and PAH undergoing on-pump cardiac surgery. These authors indicated that the administration of 0.5 μg/kg IV milrinone versus 50 μg/kg inhaled milrinone just before weaning off CPB can be simplified weaning off from CPB. This performance is due to the reduction of mPAP and maintaining MAP, and at the same time, it reduces the need to prescribe inotropes (24).

In our study, the MAP/mPAP ratio as a predictor of cardiac outcome in the IV group was significantly lower than that of the nebulized milrinone group, consistent with all previous observations (10, 25, 26). The cut-off value for this ratio is 4, indicating lower survival, more hemodynamic complications, and the long-term administration of vasopressor support for more than 24 h or the use of an aortic balloon pump in patients with post-cardiac PH (17).

In our study, this ratio in the inhaled milrinone group was significantly more than in the IV group, and the hemodynamic results of the patients confirmed this. In the present research, the incidence of difficult separation was lower in the nebulization group (relative risk = 0.201) than in the IV group. The nebulized milrinone group required less epinephrine than the milrinone IV group. This effect is caused by systemic dilation and hypotension with IV milrinone administration. Inhaled milrinone acts locally on pulmonary vascular beds and has minimal systemic side effects (24).

This article was extracted from Project No. PAIN-9922 was granted by the Anesthesiology and Pain Research Center of Ahvaz Jundishapur University of Medical Sciences, Ahvaz, Iran. This study was a randomized controlled trial (IRCT20201104049266N1).

Copyright © 2022, Author(s). This is an open-access article distributed under the terms of the Creative Commons Attribution-NonCommercial 4.0 International License (http://creativecommons.org/licenses/by-nc/4.0/) which permits copy and redistribute the material just in noncommercial usages, provided the original work is properly cited.
download pdf 564.85 KB Get Permission (article level) Import into EndNote Import into BibTex
Number of Comments: 0