The patient was a 53 years old woman with a history of implantable cardioverter defibrillator (ICD) insertion due to ventricular tachycardia. The patient complained of an awkward and unpleasant sensation when the ICD sensed the tachyarrhythmia and shocked her. Regarding the positive response to the previous SG block, with the goal of a longer duration of this effect, stellate ganglion radiofrequency was performed.

Stellate ganglion radiofrequency shows a safe and long-term effect for patients with tachyarrhythmias and ICD who cannot tolerate episodes of ICD activation.

SG is a three-dimensional structure bordered on the medial side by the longus colli muscle, the scalene muscles on the lateral side, and the common carotid artery on the anterior side. Sympathetic blocks may be used to treat the following conditions: complex regional pain syndrome types I and II, Raynaud's syndrome, frostbite, unintentional intravascular injection of medicines (a vasospastic mechanism), Sudeck's atrophy, pain from CNS lesions, scleroderma, Schizophrenia, hyperhidrosis, shoulder-hand syndrome, herpes zoster, stroke, vascular headaches, and cardiac dysrhythmias (3-5).

The stellate ganglion block (SGB) can be performed under fluoroscopy or sonography.

If performing SGB leads to successful results, a chemical neurolytic block or RF lesioning may be appropriate (4-7).

The patient was a 53 years old woman with a history of hypertension and diabetes mellitus type II who was referred to a heart center for inserting an implantable cardioverter defibrillator (ICD) after a few attacks of sudden ventricular tachycardia and loss of consciousness that had not responded to medical therapy. The ICD was successfully inserted.

After six months, the patient returned to the heart center complaining of an awkward and unpleasant sensation from the moments the ICD sensed the tachyarrhythmia and shocked her. Following is the patient's drug history: Mexiletine, Diabezide, Aspirin, Amlodipine, Metohexital, Metformin, Atorvastatin, Valsartan, and Empagliflozin. Stellate ganglion block was done twice in the center, aiming to modulate the pulse rate and ICD shock number. Aspirin was discontinued four days before each block.

The first session of SGB was done six months after the insertion of the ICD. The block was performed unilaterally under fluoroscopy guidance with 40 mg triamcinolone and 6cc ropivacaine 0.25%, first on the right side and the next day on the left side in two successive days with the same method and the same drugs. Generation of horner's syndrome and unilateral block side change in the temperature of the upper limb was determined as block success (2, 5-9).

Finally, it was decided to perform radiofrequency SGB to increase the duration of the effect. Before initiating the procedure, we consulted with a cardiologist. He visited the patient a few days earlier and came to the operating room at the beginning of the procedure initiation. Monitoring vital signs, including heart rate, blood pressure, and electrocardiogram (six leads) was performed in the operation room, and the cardiologist deactivated the ICD with a magnet before initiating the block. Furthermore, the cardiologist stayed in the operating room all over the time of block until the end and then reactivated the ICD again.

Patient preparation with neck extension and slight head rotation to the opposite side was done in the supine position. The skin was sterilized with betadine and alcohol. By linear ultrasound transducer, 5 - 12 MHz (Sonosite, EDGE2, USA), the anterior tubercle of the transverse process of C6 and, after moving caudally, the C7 transverse was confirmed. Then under the guidance of sonography with a short axial view, the internal jugular vein, the longus colli muscle, and the carotid artery were identified (Figure 1). For better screening of the vessels through the needle course, color Doppler mode was used. After skin infiltration, with a real-time ultrasound guide, an RF sharp needle 22-gauge with a 5 cm length and 5 mm active tip (Cosman, USA) from the lateral side of the probe was introduced in-plane (from the left direction for doing unilateral RF neurolysis). As we first performed PRF, which had no significant pain and irritation, we did not inject any local anesthetic before doing PRF. The needle tip was placed on the longus Colli muscle and under the prevertebral fascia. Aspiration for cerebrospinal fluid, air, or blood was negative, and 1 mL of saline was injected. A neuro-term RF electrode with a 50 mm length was inserted and connected to the generator. The RF needle was positioned perpendicular to the ganglion for performing PRF, and for thermal RF, the needle was placed alongside the SG. In the next step, sensory stimulation was performed with 50 Hz, 0.1 - 0.5 V, with no neural numbness to the upper limbs or other areas. We checked the proximity to recurrent laryngeal nerves, phrenic or the segmental nerve, which are crucial. 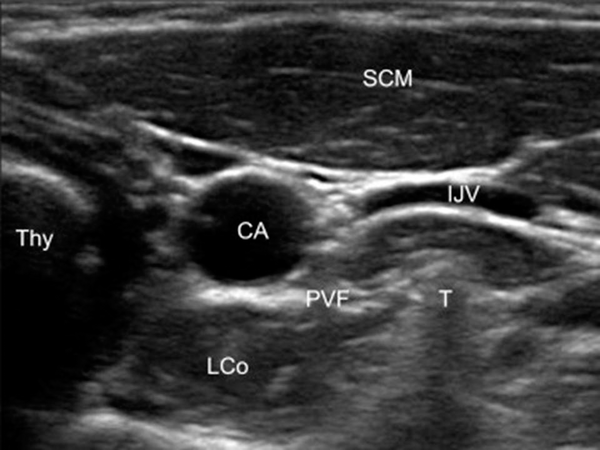 For motor stimulation, at 2 Hz, 0.4 - 1.0 V exercise test, no corresponding segmental muscle tremors, and the jumping sensation was observed. Motor stimulation was performed by asking the patient to say "ee" to check for preservation of the motor function and exclude needle malposition. After the negative sensory and motor test, high voltage (60 V) PRF at 42°C for 360 s, 20 ms pulse width, and 2 Hz frequency started. Then before starting RF at 80ºC, we injected 1cc lidocaine 2% to prevent irritation and pain that may result from neurolysis at high temperatures. At 80ºC for 60 seconds, thermal left unilateral RF neurolysis was performed and repeated four times after needle-tip rotation and directed to the most medial site and most ventral aspect of the C6 and C7 transverse process under US guidance, with repeated sensory and motor stimulation before RF lesioning. Thirty minutes after the procedure's termination, a follow-up ultrasound screening was done to exclude any hematoma formation.

From pre- to post-block, there was an increase in the forehead and hands temperature, as recorded by a skin thermometer, which was used as a surrogate for a successful block.

After doing RF neurolysis in multiple time intervals, we visited the patient 1, 3, 6, 12, and 14 months later, and observed no signs of ventricular tachycardia. The patient did not complain about the unpleasant sensation of ICD activity and shock. At this time, she did not have the problem up to 14 months after the procedure and showed no sign of recurrence of the cardiac tachyarrhythmia.

In recent years, interventional therapies that target the cardiac nervous system to control ventricular arrhythmias are gaining popularity. It is planned that in most cases, electrical storm or ventricular arrhythmia are associated with a heightened sympathetic tone that could be refractory to beta-blockade, antiarrhythmic therapy, and other hemodynamic supports. Most spinal sensory afferents pass through SG on their way to the dorsal horn of the spinal cord, where they have been linked to the development of arrhythmogenesis. Anesthetic drugs infused into SG also target these fibers, reducing both afferent and efferent neurotransmission at SG. Although SGB does not affect vagal afferents, lowering spinal afferents likely reduces overall cardiac afferent neurotransmissions (3, 10-21).

They discovered that in patients with refractory ventricular arrhythmias, performing unilateral or bilateral SGB can reduce arrhythmia occurrences for 24 - 72 hours, allowing time for additional interventions such as catheter ablation. SGB appears to be effective regardless of different kinds of ventricular arrhythmia. Otherwise, even when performed on patients with anticoagulation therapy, ultrasound-guided SGB is safe and has a low risk of sequelae.

Yang et al. (21) described a patient with a refractory VT to medication and catheter ablation history. Under ultrasound guidance, a left SGB injection using the mixture of 0.4% Lidocaine and 0.5% bupivacaine was performed immediately after the block sinus rhythm was retained. They found that left SGB may provide effective VT control and can be considered a necessary rescue treatment or bridge therapy with catheter ablation.

The current findings support the use of RF unilateral SGB as an effective complement to modern medicines in treating cardiac arrhythmia and electrical storms. However, additional research is needed to understand the safety and efficacy of SGB radiofrequency and compare different RF modalities in randomized clinical trials.

SGB radiofrequency is a good method in patients with refractory tachyarrhythmias. It is a minimally invasive method with the least side effects and can perform under the guidance of sonography. With the goal of a longer block duration, we did SG radiofrequency. The block duration in our patient, according to the last visit, was 14 months.

Copyright © 2023, Author(s). This is an open-access article distributed under the terms of the Creative Commons Attribution-NonCommercial 4.0 International License (http://creativecommons.org/licenses/by-nc/4.0/) which permits copy and redistribute the material just in noncommercial usages, provided the original work is properly cited.
download pdf 1.36 MB Get Permission (article level) Import into EndNote Import into BibTex
Number of Comments: 0