Heart failure (HF) is a complex clinical syndrome caused by a structural or functional heart disorder. One of the most important challenges for anesthesiologists is the management of anesthesia in patients with severe heart failure, which has been facilitated by advanced monitoring systems.

The patient was a 42-year-old man with a history of hypertension (HTN) and HF with involvement of the three coronary arteries (3VD) with ejection fraction (EF) 15%. He was also a candidate for elective CABG. In addition to the insertion of arterial line in the left radial artery and the Swan-Ganz catheter in the pulmonary artery, the patient was also monitored by the Edwards Lifesciences Vigilance II for cardiac index (CI) and intravenous mixed blood oxygenation (ScvO2). Hemodynamic changes during and after surgery, as well as during inotrope infusion, were controlled, and the amount of fluid therapy was calculated by gold direct therapy (GDT) method.

Using PA catheter with advanced monitoring and GDT-based fluid therapy guaranteed a safe anesthesia in this patient with severe heart failure and EF < 20%. Moreover, the postoperative complications and duration of ICU stays were significantly reduced.

Heart failure (HF) is a complex clinical syndrome caused by a structural or functional heart disorder that impairs the heart’s ability to acquit the body’s metabolic needs. Heart failure can be due to a disorder of diastolic filling or systolic ejection, or both. Coronary artery disease (CAD) is the most common cause of HF revascularization improves cardiac function and NYHA function class, reduces arrhythmia, and increases survival (1).

Short episodes of ischemia, followed by perfusion, may cause pre-conditioning of the heart, so when severe ischemia is encountered, the size and severity of ischemia decrease (3).

One of the most important challenges for anesthesiologists is the management of anesthesia in patients with severe heart failure, which has been facilitated by advanced monitoring systems (4, 5).

Our patient was a 42-year-old man with a weight of 95 kg and a height of 183 cm, with a history of HTN and a positive family history of heart disease, who had been referred to the hospital due to dyspnea and retrosternal chest pain. Transthoracic echocardiography was performed. Moderate LV enlargement with severe systolic dysfunction, ejection fraction of 15%, no LVH, normal atrial sizes, inferior and anteroseptal akinetics part with some loss of tissue, mild to moderate MR, and mild to moderate TR were found.

Coronary angiography was performed on the patient, and a three-vessel disease was identified. Significant stenosis was reported in the left main and right coronary arteries with thrombosis and cut-off.

The patient was transferred to the cardiac operating room in Rajaie Cardiovascular Center meeting “ASA: IV” and “FC: III” criteria for CABG surgery. After inserting peripheral venous catheter and arterial line catheter into the left radial artery and sending the ABG first sample, the patient was pre-oxygenated, and the induction with midazolam 0.1 mg/kg, sufentanil /5 μg/kg, and cisatracurium 0.2 mg/kg was titrated by blood pressure control. At an appropriate time, the patient was intubated without making significant change to the hemodynamics.

Then, Swan-Ganz catheter was inserted from the right internal jugular vein, and the data were analyzed by connecting to the Edwards Lifesciences Vigilance II monitoring (Figure 1). 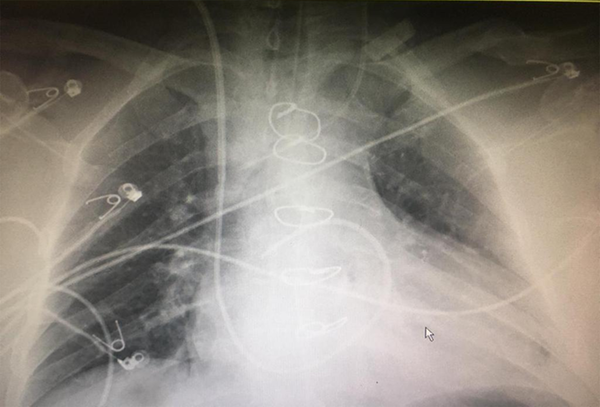 The correct location of the Swan-Ganz catheter, which was installed in the operating room and its location in the ICU was confirmed by CXR

Initially, the patient’s CI was 2.4 L/min/m2 and remained at that level before the pump, and no special maneuver was required, and means blood pressure was normal (MAP > 65 - 70 mmHg). The conditions during the operation were stable.

The patient underwent cardiopulmonary bypass (CPB), CPB time was 76 minutes, and the duration of aortic cross clamp was 32 minutes. The total time of surgery was four hours. The amount of heparin used for the patient was based on the weight of 30000 units, and the amount of anticoagulation checked with ACT After performing three grafts on LAD, LCX, and OM1 arteries, the patient was disconnected from CBP by administrating 0.05 μg/kg/min Norepinephrine (NEP); heparin was reversed by 350 mg of protamine. Then he received two units of FFP and Platelet in the operating room, and was transferred to ICU.

Four hours later, the patient in ICU was evaluated and the CI was reported to be 1.7 L/min/m2. During the first day of ICU hospitalization, the patient’s lactate increased to 11. The patient’s MAP was about 65 mm Hg, but the norepinephrine infusion continued at a minimal dose, and the patient was extubated overnight after surgery (Figure 2). 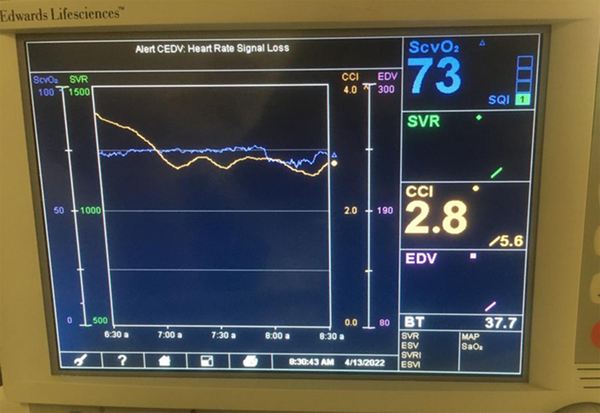 Edwards monitor, the night after surgery before the patient extubation

From the PA catheter, as ABG sample was obtained, ScvO2 was 85%, and lactate decreased. Finally, two days after surgery, the patient’s CI reached 3.1, and the PAC catheter was removed, and the patient was transferred to the ward in a normal general condition with stable hemodynamics.

Heart failure is a clinical syndrome in which the structural or functional dysfunction of the heart occurs in either systole or diastole or both. The most common cause is coronary insufficiency, in which the heart is not able to circulate blood rapidly between body tissues and collect it and, as the result, a combination of clinical manifestations such as congestion, shortness of breath, weakness, and fatigue occurs (1, 2).

The application of PA catheters has always been controversial among cardiac anesthesiologists PA catheters are commonly used in adults in centers where CPB facilities are available Proponents of PAC suggest that timing catheter placement, interpretation of PAC data, and appropriate initial intervention to monitor its data have significant consequences on selecting the appropriate treatment plan (6).

Decreased mortality in high-risk surgical patients has been reported in patients with preoperative PAC and protocol-based interventions. The indications for installing a PA catheter are:

(2) Diagnosing and investigating the cause of shock by evaluating ScvO2 and differentiating septic shock from cardiogenic;

(4) Evaluation of pericardial disorders such as cardiac tamponade;

(5) Evaluation of right heart and some valvular and congenital diseases and heart shunts before and after surgery (7).

Finally, with the PAC catheter, we are able to measure the parameters that help us in hemodynamic stability. These include ventricular function, pulmonary vascular resistance, ScvO2, CI measurement, the patient’s core temperature (difference in RV and LV function), and the measurement of cardiac filling pressure during injection of cardioplegia solution into the anterograde, which cannot be assessed with central vein line alone.

It is also possible to measure cardiac output every 30 to 60 minutes semicontiniously (7).

In the anesthesia management of our patient, the CI of the monitor showed 2. L/min/m2 in ICU ward. Comparing this number with the increase in lactate reported during the first hours after surgery and the percentage of intravenous mixed blood, which was above 80%, suggested that central visceral perfusion may have been impaired. It should be noted that the patient’s MAP pressure was 60 - 65 mmHg with norepinephrine. For the patient, 200 + 200 mL of normal saline was injected in a bolus for 15 minutes, and his CI reached 2.1 L/min/m2 (Table 1, ICU 2). Echocardiography performed by a fellow cardiologist showed no a change in the patient’s E.F. compared to that in the preoperative period (about 15%).

Table 1. The Process of Hemodynamic Changes Monitored by the Advance Cardiac Monitoring

a Time that patient transferred to ICU

b Time after gold direct therapy

c Time after the patient was extubated

Due to the positive evaluation of the patient’s fluid challenge and CI improvement, a decision was made to extubate the patient, as the result of which the CI reached 2.8 L/min/m2 a few hours later (Table 1, ICU 3).

Despite the improvement of clinical symptoms, the drip of NEP incontinence continued, as the result of which CI reached 3.1 L/min/m2 two days after the patient was extubated and the PA catheter was removed (Table 1, ICU 4).

It should be noted that the amount of serum therapy according to GDT protocol was well-observed in this patient (8), and lactate fell below two over time. Intravenous mixed blood oxygenation was reported to be about 75%.

An important measure that was implemented for this patient was his early extubation after the stabilization of cardiac and pulmonary symptoms (9).

It should be noted that minimal sedation can cause a reduction in blood pressure of the patients like our case, and preferably drugs with greater cardiac stability are used. For our patient, fentanyl at a dose of l00 µg/kg/h, as well as the non-narcotic steroids drugs such as Apotel were used to control analgesia after extubating. In addition to safe anesthesia, the patient was discharged from the ICU at an appropriate time when his general condition was favorable. The month after surgery was determined. Our patient referred to the heart clinic the following month, and his rate was found to be EF: 25 - 30%; however, his clinical symptoms such as shortness of breath and chest pain and FC had been significantly improved.

Some studies have indicated that this method is also effective for patients like our critical patient.

Mythen and Webb (10) concluded that the intraoperative optimization of the cardiac output increased the splanchnic blood flow among their study population. Subsequently, McKendry et al. (11) reported that a flow-directed hemodynamic algorithm after cardiac surgery in the I.C.U. reduced complications and the length of hospital stay. Hanc et al. (12) showed that early goal-directed hemodynamic therapy based on the cardiac index, SVV, improved global end-diastolic volume index and had the potential to reduce complications and the length of ICU stay after cardiac surgery.

The finding from those studies was consistent with our study result in terms of using PA catheter. It was concluded that using PA catheter with advanced monitoring and GDT-based fluid therapy guaranteed a safe anesthesia in patients with severe heart failure and EF < 20%. Moreover, postoperative complications and the number of patients admitted to the ICU were significantly reduced.

Copyright © 2023, Author(s). This is an open-access article distributed under the terms of the Creative Commons Attribution-NonCommercial 4.0 International License (http://creativecommons.org/licenses/by-nc/4.0/) which permits copy and redistribute the material just in noncommercial usages, provided the original work is properly cited.
download pdf 4.46 MB Get Permission (article level) Import into EndNote Import into BibTex
Number of Comments: 0