Phenylephrine is used to prevent and treat hypotension during spinal anesthesia for cesarean delivery.

The present study aims to investigate the effects of different regimens of phenylephrine on blood pressure of candidates for the cesarean section.

In all the three groups, the incidence of nausea and vomit, bradycardia, hypertension, and neonatal Apgar score were not statistically different (P > 0.05). However, the adjuvant phenylephrine dose requirement was remarkably different. Moreover, the mean systolic blood pressure differed significantly in the second and 7th minutes after the spinal block (P < 0.05). 35% in the first group, 15% in the second group, and 2.5% in the third group had hypotension (P = 0.001). Apart from the first measurement after spinal anesthesia, the mean heart rate showed no significant difference between the groups.

The use of prophylactic phenylephrine infusion is recommended to control the optimal blood pressure in parturients undergoing cesarean section after spinal anesthesia.

One of the most common complications of spinal anesthesia, especially in pregnant women, is hypotension. If effective measures are not taken to prevent it, the incidence of hypotension will be about 80% (5, 6). The main cause of hypotension and bradycardia in spinal anesthesia is the hindered activity of the sympathetic nervous system (7). This can lead to blood pooling in lower limbs and hypotension intensified by the aortocaval pressure of the enlarged uterus. To maintain the maternal cardiac output and arterial pressure, the liberal use of crystalloids and colloids is not sufficient, so the use of vasopressors is required to prevent and treat hypotension (8-10). Recent data do not support the use of ephedrine as the primary therapeutic option to prevent or treat maternal hypotension after spinal anesthesia (11, 12).

Phenylephrine is a selective α1-adrenergic agonist. Its rapid onset and short duration of action have made it an appropriate and effective infusion drug (13). Unlike ephedrine, phenylephrine leads to increased umbilical PH which in turn ensures enough umbilical blood circulation (14). Considering the advantages of phenylephrine, it is currently the first-line choice to prevent spinal hypotension during cesarean (15). Some studies have investigated the phenylephrine usage as bolus or infusion to maintain maternal arterial blood pressure during spinal anesthesia; however, more studies are required to determine the best regimen and dose of phenylephrine with an emphasis on maternal and neonatal outcomes (15, 16).

This present study compares the efficacy of prophylactic bolus (100 µg) and infusion (50 µg/min) regimens of phenylephrine with the placebo to reduce the maternal hypotension after the induction of spinal anesthesia in cesarean sections.

This is a double-blind, randomized clinical trial was approved by the Research Ethics Committee of the Hamadan University of Medical Sciences and registered in the Iranian Registry of Clinical Trials coded as IRCT201601238768N4. The study protocol conforms to the ethical guidelines of the 1975 Declaration of Helsinki as reflected in a prior approval by The Institution's Human Research Committee. The participants comprised of 120 healthy women undergoing elective cesarean delivery under spinal anesthesia with an ASA class I and singleton term infant referring to Fatemieh Hospital, Hamadan, Iran. Using a block randomization technique with a block size of 6, we categorized the women randomly into 3 groups each with 40 members. Some women were excluded from the study under the following circumstances: laboring women with a history of chronic hypertension, preeclampsia, twin pregnancy, preterm infants, a history of allergy to anesthetics or other medications including phenylephrine, placenta accreta, and percreta, a history of cardiovascular, pulmonary or renal disease, or a history of multiple previous surgeries leading to severe adhesion bands and fibrosis. When the patient arrived at the operating room, a G18 catheter was inserted and 10 mL/kg IV crystalloid (Ringer's lactate) was infused for each patient. Noninvasive BP monitoring, O2 saturation, and ECG monitoring devices were attached to the patients whereby their vital signs were recorded. Spinal anesthesia was induced in the sitting position at either L3-L4 or L4-L5 spaces by injecting 10 milligrams hyperbaric bupivacaine 0.5% and 25 micrograms fentanyl, after which the patient was immediately placed in the supine position. The level of anesthesia was measured by assessing the loss of pinprick discrimination five minutes after the intrathecal injection. The patients’ blood pressure and heart rate were recorded before the induction of spinal anesthesia, immediately after induction and every 1 minute until the end of delivery. 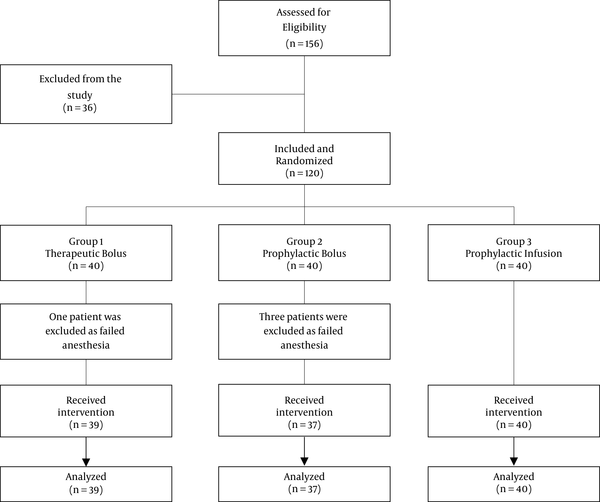 Other pieces of information such as the patients’ age, weight, height, gestational age and any incidences of nausea or vomiting, bradycardia (HR < 60), hypotension or hypertension, the number of atropine and bolus phenylephrine requirements and adjuvant phenylephrine dose were recorded in the checklist.

Table 1. Comparison of Mothers’ Characteristics in the Three Groupsa

Table 2. Comparison of Major Hemodynamic Characteristics in the Three Groupsa

aValues are expressed as mean ± SD or frequency (%).

Evaluating the secondary outcomes of the patients showed that the groups were not considerably different in terms of nausea and vomiting, bradycardia, the number of atropine requirements, and incidence of hypertension (P > 0.05) (Table 3).

Table 3. Comparison of Secondary Outcomes in the Three Groupsa

aValues are expressed as mean ± SD or frequency (%).

Although HR was always lower in the prophylactic phenylephrine infusion group than the other two groups in our study, there was no significant difference in the mean HR between the three groups. Faiz et al. examined the effects of intrathecal injection of magnesium sulfate (MgSO4) to bupivacaine on perioperative shivering in patients undergoing elective cesarean section. No significant difference was observed in the mean of the heart rate between the groups at various time points after blocking (21).

Our finding corresponds with the study by Siddik-Sayyid et al. in which they observed no significant difference in HR between the prophylactic phenylephrine infusion and the therapeutic phenylephrine bolus group (17). Faiz et al., assessed the anesthetic effects of adding intrathecal neostigmine or magnesium sulphate to bupivacaine in patients under lower extremities surgeries. As a result it was indicated that the homodynamic status was not significantly different across the study (22).

The three groups in our study had no significant differences in perioperative nausea and vomiting. In a study by George et al., compared the incidence of intraoperative nausea and vomiting in obese patients who received a prophylactic phenylephrine infusion versus those who received phenylephrine boluses undergoing cesarean delivery. Their results revealed that there was no difference in the incidence of intraoperative vomiting between the two groups (23).

The limitations of the present study included the complete blinding and preparation of placebo, drug syringe pumps, and repeated blood pressure measurements.

The results of the present research suggested that prophylactic phenylephrine infusion (50 µg/min) reduced the incidence of hypotension more effectively than the prophylactic bolus and therapeutic bolus groups in women undergoing spinal anesthesia for cesarean section, and provided a better hemodynamic stability for the mothers. Nonetheless, more studies are needed to consider other aspects of mother and neonatal well-being in this area.

The authors would like to express their sincere appreciation to the operating room staff of Fatemieh Hospital for their contributions to this study.