Comparison of Effects of Melatonin and Gabapentin on Post Operative Anxiety and Pain in Lumbar Spine Surgery: A Randomized Clinical Trial

Surgery is one of the stressors that cause physiological and psychological stress. Anxiety and pain and their complications are very important in anesthesiology and many researches have been done to decrease or eliminate them. This training was done to compare the effect of melatonin and gabapentin on pain and anxiety during lumbar surgery.

This study was a double-blinded clinical trial conducted on 90 patients undergoing lumbar surgery with general anesthesia in Golestan Academic Hospital in 2017. Patients were randomly assigned into 3 groups: 30 patients received 6 mg melatonin, 30 patients received 600 mg gabapentin, and 30 patients were on placebo (control), 100 minutes preoperatively. All patients were given a fixed method of anesthesia. The pain intensity and patients’ satisfaction from analgesia measured at 1, 2, 6, 12, and 24 h after surgery. The anxiety was measured 15 minutes before surgery and 1, 2, 6, 12, and 24 h after surgery.

The results show that pretreatment with melatonin or gabapentin decreases anxiety and pain in lumbar surgery.

If anxiety is not controlled or prolonged, it can lead to increased protein degradation, re duced wound healing, increased risk of infection, altered immune response, electrolyte imbalance and fluid changes, and changes in sleep pattern. These factors prolong hospital stay and delay the discharge of patients (6, 7). Postoperative pain is a form of nociceptive pain relating peripheral mechano-receptor stimulation. In addition, inflammatory, neurogenic, and visceral mechanisms contribute to acute pain symptoms (8, 9). Lumbar disc surgery has a lot of pain and anxiety after surgery; this can prolong the recovery period of the patient. Therefore, we need to take the necessary measures to reduce the patient’s pain. A large number of drugs and various methods for reducing postoperative pain and anxiety have been studied.

The analgesic, anti-inflammatory, anti-anxiety, and anti-agitation effects of melatonin have been shown in several studies (10). Several studies have reported that melatonin, given as preoperative premedication, is associated with sedation and preoperative anxiolysis without mental dysfunction including the memory recall and driving performances or the quality of recovery. Although some trainings indicate that preoperative administration of melatonin can decrease postoperative pain and reduce narcotic intake, its effect on pain and anxiety has not yet been clarified to be recommended widely. In addition, some other studies have found contentious results in this regard (11, 12).

Gabapentin is constructively similar to amino acid inhibitory amino acid with aminobutyric acid and is known as one of the new anticonvulsants. Gabapentin, a well tolerable anti-epileptic drug with limited adverse effects, has analgesic, anticonvulsant, and anxiolytic effects. Gabapentin is effective in the treatment of neuropathic pain, itching, chronic pain, postoperative pain, over-active children with epilepsy, prevention of migraine headache attacks, and postoperative neuralgia. Gabapentin reduces the voltage-dependent membrane calcium flow to the posterior nerve endings of the mouse ganglia and, by reducing the neurotransmitter release, it reduces the sensory nerves as a process dependent on calcium. Another mechanism for gabapentin analgesic function is the regulation of glutamate receptors (n-methyl-D-aspartic acid and α-amino-3-methyl-4-isoxazole-propionate / caynate) (13, 14). On the other hand, the use of gabapentin in neuropathic pain and control of postoperative pain has also been noted (15). Additionally, gabapentin seems to be an anxiolytic without amnesic effects, which is an important benefit for old patients. Leung and colleagues reported that delirium is significantly less in patients receiving gabapentin before spine surgery (15).

In this study, the efficacy of melatonin and gabapentin in assessing the anxiety and postoperative pain in lumbar spine surgery in patients referred to Golestan General Hospital is done.

After approval of the Ethics Committee of Ahvaz Jundishapur University of Medical Sciences and written permission to enter the study, there were 90 patients who were referred to Golestan Hospital for operating discopathy from Septamber to December 2017. This study was performed as a randomized, placebo-controlled clinical trial. This research was supported by the Pain Research Center, Ahvaz Jundishapur University of Medical Sciences, Ahvaz, Iran, under proposal number pain-9602, IR.AJUMS.REC.1396.86. All patients provided written informed consent.

Patients were randomly assigned to 3 group; melatonin, gbapentin, and placebo group (Figure 1). A total of 100 minutes before induction of anesthesia in melatonin (ESI, Italy), gabapentin (Daro Pakhsh, Iran), and placebo groups a total of 6 mg melatonin, and 600 mg gabapentin orally, and dummy pill as a placebo (that manufactured by pharmacology school) with 30 ml of distilled water, were respectively prescribed. Melatonin and gabapentin doses were selected based on previous studies (16). After transferring the patient to the operating room bed, all patients undergo standard monitoring including electrocardiogram, pulse oximetry, and non-invasive measurements of blood pressure and heart rate. At this time, the anxiety level of the patients before surgery was recorded using Verbal Analog Score (VAS) (from 0: no anxiety to 10: maximum anxiety). After administering an appropriate intravenous route and administering 10 cc / kg of isotonic fluid and pre-oxygenating for 3 minutes, all patients were given a fixed method of anesthesia with 0.03 mg / kg midazolam, 2 µg/kg fentanyl, 4 mg / kg Sodium thiopental (STP), and 0.5mg / kg atracurium. Hemodynamic monitoring including SBP, DBP, MAP, HR, arterial oxygen saturation, and ECG were monitored continuously during operation. 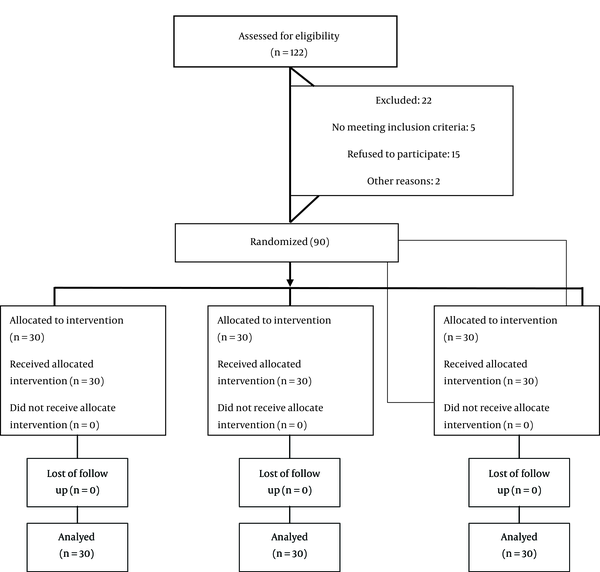 Participants were randomly allocated to three groups by using a computer-based randomization program (n = 30 in each group), which is showed in Figure 1. This was a double-blind study in which patients and outcome evaluators were blinded, however, not the investigators due to the nature of the interventions.

Sample size: The sample size was determined rendering to a similar preceding study (13). A sample size of 30 patients in each group was planned to detect this difference with Type I error of 0.05 and Type II error of 0.20. To compensate shifting from normality in data distribution, 30 cases were used in each group.

Informed printed consent was obtained from all participants and the Ethical Committee of Ahvaz Jundishapur University of Medical Sciences approved this study in 2017 (Ref. No.IR.AJUMS.REC.1396.311). The study design conformed to the ethical guidelines of the 2008 Declaration of Helsinki and it has been registered at the Iranian Registry of Clinical Trials (IRCT ID: IRCT2017100436566N1).

All statistical analyses were performed using SPSS version 20. All main outcomes are presented as mean (± SD) and frequency (%) for continuous and categorical variables, respectively. The statistical significance level was set at a two-tailed type I error of 0.05, and deviation from abnormal distribution were determined by the Kolmogorov-Smirnov and Repeated Measures ANOVA.

Univarate analysis was done by the Student t-test and Mann-Whitney, Chi-square and repeated measures tests. Mixed model, linear regression, and logistic regression were used to evaluate the data in multivariate analysis.

A total number of 90 patients included in this study, were divided in 3 groups; receiving melatonin and gabapentin and placebo, respectively. Characteristics of the patients involved in the study are shown in Table 1. No statistically significant differences between groups were found in the patients' demographic and clinical characteristics and ASA class (Table 1). Our findings showed that melatonin and gabapentin had significant effects on postoperative pain and anxiety and a decremental pattern was recorded for both parameters (P < 0.05). Pain VAS score is shown in Table 2. It was significantly lower in the gabapentin group in comparison to the melatonin group 12 hours after surgery (1.7 ± 0.67 versus 2.4 ± 0.55, P = 0.03) and 24 hour after surgery (1 ± 0.37 versus 1.8 ± 0.58, P = 0.02), however, in another time significant difference was not recorded. Pain score in gabapentin and melatonin group were lower at 1, 2, 6, 12, and 24h after arriving to recovery room in comparison to placebo group (P < 0.05). Anxiety was affected by melatonin and gabapentin. Its value was affected immediately after melatonin and gabapentin medications, as decreased anxiety score (VAS) from5.5 ± 0.81 in placebo group to 3.8 ± 0.77 and 4 ± 0.49in melatonin and gabapentin group, respectively 15 minutes before surgery (P = 0.04). Anxiety decreased at 1, 2, 6, 12, and 24 hour after arriving to the recovery room. Its score was lower in gabapentin and melatonin groups in comparison than the placebo at all times (P < 0.05). A total of 24 hour after surgery, significant difference was seen; anxiety score was 1.2 ± 0.44,1.4 ± 0.20 and 2.6 ± 0.36 in gabapentin, melatonin, and placebo groups, respectively (P = 0.03)(Table 3).

Table 1. Characteristics of the Patients with Lumbar Surgery Involved in the Studya

The patients’ satisfaction after 6 hours, were significantly higher in melatonin and gabapentin groups than the placebo (P = 0. 04 in the sixth hour after surgery and P = 0. 02 in the 12th and 24th hour after surgery) (Table 4). Blood pressure was not affected by used drugs, therefore mean, systolic, and diastolic pressure was not significantly different in any of the groups at the any time (P > 0.05)(Table 5). Respiratory rate showed a similar pattern and did not show any significant difference between groups (P > 0.05).

bVerbal rating scale including: 4 as excellent, 3 as good, 2 as moderate and 1 as inappropriate.

In a study done in India, patients who were candidates for cholecystectomy from 20 to 50 years of age were also taking gabapentin in comparison with acetaminophen or placebo. In groups that received gabapentin, reduced pain and need for postoperative analgesics was recorded (23).

Glutamate, GABA, and opioids are involved in analgesic effects of melatonin. For example, melatonin activate opioid receptors and decrease formation of CAMP in neurons. In addition, it opens K channels through opioid receptors of potassium channels and activates the analgesic system in the spinal cord by hyper-polarization, thus, inhibits pain transfer (15). On the other hand, melatonin can decrease the expression of lipoxygenase and cyclooxygenase enzymes and therefore, prevents the formation of inflammatory precursors (17). Gabapentin can interfere with the release of neurotransmitters from sensory neurons, which is calcium dependent. Gabapentin also seemed to be an anxiety reducing agent without the forgetfulness effects, which is of great benefit to the elderly people (19).

Among the studied indices, pain intensity was significantly lower in the gabapentin group than the melatonin group, whereas the other indices did not show a significant difference between the two groups. In a study in Egypt on patients aged 30 - 55 years, one hour before the abdominal surgery gabapentin and melatonin was prescribed to evaluate the efficacy of them in reducing postoperative pain and required analgesics. In the gabapentin group, the time required to administer the first dose of the analgesic was longer after surgery and the number of patients requiring postoperative analgesia was significantly lower than that of the melatonin and control group. In addition, the pain reductive effects of gabapentin were more than melatonin (17). Freedman and O'Hara showed that administration of gabapentin near the surgical time in mammoplasty patients decrease use of narcotics after surgery by 21% (24).

Drowsiness, the most common side effects of gabapentin are: confusion, ataxia, swelling, and feeling of tiredness that diminishes 2 weeks after drug use (24). In this study a single dose of gabapentin was used, thus, patients did not report any side effects. Ismail et al., (19) found that MAP was significantly reduced after melatonin premedication, although it was described that this difference, at some points, was unimportant between the groups that was consistent with our results. However, a large dose of melatonin may produce obvious results. Sadat Hosseini et al., (25) showed that after taking gabapentin and melatonin, the intensity of postoperative pain has significantly decreased compared to control group that is consistent with the results of this study.

Some limitations of this paper should be acknowledged. The sample size of this study was small and this could have affected the results.

This paper was part of a thesis (Project code: PAIN-9602) and (Ref. No.IR.AJUMS.REC.1396.311). Financial support for this study was provided by Ahvaz Jundishapur University of Medical Sciences. We sincerely thank the patients who cooperated with us in this project and supported the research team.

Copyright © 2018, Author(s). This is an open-access article distributed under the terms of the Creative Commons Attribution-NonCommercial 4.0 International License (http://creativecommons.org/licenses/by-nc/4.0/) which permits copy and redistribute the material just in noncommercial usages, provided the original work is properly cited
download pdf 136.82 KB Get Permission (article level) Import into EndNote Import into BibTex
Number of Comments: 0