Spinal anesthesia, as an effective approach, is widely performed in various surgeries with possible complications. To reduce the side effects, many adjuvants are used to maintain desirable sensory and motor blockades and increase the quality and prolong the analgesia.

In the current double-blind, randomized clinical trial, 105 participants aged 18 - 60 years with ASA class I or II who were candidate for lower limb surgery were randomly allocated to patients receiving bupivacaine 15 mg + normal saline 1 mL (B group), bupivacaine 15 mg + epinephrine 10 µg (BE group), and bupivacaine 15 mg + sufentanyl 5 µg (BS group). Onset of sensory blockade was determined bilaterally with the pinprick test. The maximum Bromage scale was assessed for the onset of motor blockage. Recovery from sensory and motor blockades was also evaluated. Pain score (visual analogue scale; VAS) was determined for all participants.

The current study results suggested that the combination of 10 µg epinephrine and 5 µg sufentanil + bupivacaine did not prolong the sensory and motor blockades in spinal anesthesia for lower limb surgery, compared with bupivacaine alone.

Spinal anesthesia, as an effective and safe approach, is widely performed in various surgeries, and became popular among anesthesiologists during the last decade. Different regimens are introduced in this approach, while bupivacaine is the most popular local anesthetic introduced (1-3).

There are some complications related to this method including limitation along the sensory and motor blockades during the surgery. On the other hand, using local anesthetics alone are disfavored due to short prolongation (2, 4). To reduce the side effects, many adjuvants such as opioids, clonidine, and epinephrine are introduced to maintain desirable sensory and motor blockades, prolong the efficacy, and increase the quality of analgesia (5, 6).

Sufentanil, an opioid known for its rapid onset of pain relief, gained attention among anesthesiologists, while its duration of action is relatively short (7). Epinephrine, however, is used alongside local anesthetics to prolong the analgesia due to its vasoconstrictive effects and reduction of local blood flow (2, 8).

Application of additives to prolong the quality and duration of the blockade (9), which provides sufficient analgesia along with minimal hemodynamic effects, is still a debate. Additionally, intrathecal bupivacaine alone provides effective sensory and motor blockade for lower limb surgeries. Due to conflicting results of the effect of bupivacaine alone or in combination with other drugs, the current study aimed at evaluating the duration and quality of analgesia by adding sufentanil and low-dose epinephrine to bupivacaine in spinal anesthesia.

The current double-blind, randomized, clinical trial was conducted on patients referred to a university hospital to undergo lower limb orthopedic surgery with ASA (the American Society of Anesthesiologists) class I or II, and the age range of 18 - 50 years. Exclusion criteria were patients with sepsis, fever, and local infection in the site of needle insertion, coagulation disorders (including international normalized ratio (INR) > 1.5 or platelet count < 100,000), failure of spinal anesthesia, and history of drug abuse. All participants signed written informed consent. The protocol of the study was approved by the local Ethics Committee; the study was also registered in the Iranian Registry of Clinical Trials (code: IRCT2014050717607N1). To calculate the sample size, a pilot study was performed on 10 patients (five in each group), in which μ1 was measured as 4.25 and μ2 as 5. Therefore, “n” was calculated as 30 for each group resulting in a total sample size of 90.

In the current study, using a computer-derived randomized list, participants were randomly allocated into three groups: Patients receiving plain bupivacaine 15 mg + normal saline 1 mL (B group or the placebo group), bupivacaine 15 mg + epinephrine 10 µg (BE group), and bupivacaine 15 mg + sufentanil 5 µg (BS group). After placing an 18-gauge intravenous (IV) catheter, 7 mL/kg normal saline was infused for all patients. Spinal anesthesia was performed under aseptic conditions on patients in the sitting position with a 25-gauge Whitacre needle at L3 - L4 interspace (Dr. Japan Co. LTD -K-3 point type). After clear cerebrospinal fluid (CSF) flow, drug injection was administered as previously described with injection rate of 0.2 mL/second. Sensory and motor blockades and other data were recorded by an investigator blind to the study. The patients, investigators, and anesthesiologist were blind to the study.

Monitoring including systolic, diastolic, and mean blood pressure, pulse oximetry, electrocardiograph, and heart rate were administered for all patients thorough the surgery. Vital signs were evaluated with an interval of three minutes for the first 15 minutes and every five minutes interval then after. If the heart rate or the mean blood pressure decreased to 70 mmHg or up to 20% of base mean blood pressure, 5 mg of ephedrine, and in case of heart rate under 50 bit/minute, 0.5 mg of atropine were intravenously injected. After the end of spinal procedure, the patient was repositioned as supine. Then, bilateral sensory and motor blockades after the injection, and every minute to rise to T10 level, were evaluated and recorded by a blinded observer. Also, the heart rate, respiratory rate, SPO2, and systolic and diastolic blood pressures were recorded five minutes before and then every 15 minutes up to the end of the surgery.

Motor blockade onset was defined as the time from intrathecal injection to impossibility of ankle flexion. When the score was 0 in Bromage scale, it was considered as recovery from motor blockade. Also, the intra-operative and recovery phase complications including nausea and vomiting, and itching were recorded.

Visual analogue scale (VAS) (subjects are asked to rate their pain intensity by marking a 10-cm horizontal scale graded from “no pain” at one end to “worst pain possible” at the other end) was also used for all the participants six hours after surgery and meperidine 20 mg IV was administered if the VAS was > 4 .

All data were analyzed with SPSS version 21 (SPSS Inc. Chicago). The Kruskal-Wallis and the Mann-Whitney U tests were used to compare data among the groups. Significance of differences for continuous and categorical variables was examined with the Student t-test and Chi-square test, respectively. P values < 0.05 were considered statistically significant.

From a total of 136 patients, considering the inclusion and exclusion criteria, 105 participants were randomly selected (Figure 1). 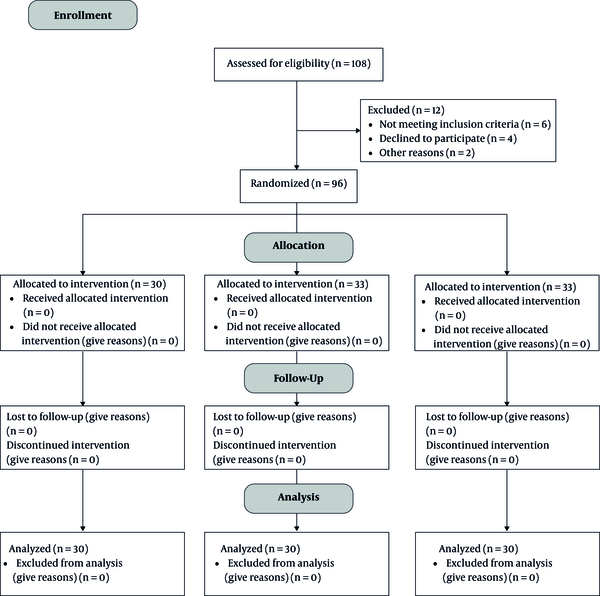 The study flowchart for participant selection

Table 1. Demographic Characteristics of the Participantsa

a Values are expressed as percentage or mean ± SD.

As illustrated in Table 2, intrathecal bupivacaine (placebo group) had the lowest onset of sensory blockade, whereas the onset of motor blockade was significantly shorter with the administration of sufentanil + epinephrine (P = 0.001) (BS and BE groups). However, epinephrine (BE group) did not significantly increase the duration of sensory and motor blockade. Recovery time from sensory and motor blockades was lower with the bupivacaine alone (the placebo group) (Table 3).

b P values were calculated using the Student t-test.

b P values were calculated using the Student t-test.

No significant difference was observed among the groups regarding the highest level of sensory blockade (Table 4).

Nausea and vomiting were uncommon in the three groups. There was no difference among the groups in the incidence of pruritus (Table 5).

Table 5. Frequency of Complications Among Groupsa

a Data are expressed as number.

No difference was observed between the groups regarding the VAS score six hours after surgery (P = 0.06) (Table 6).

b P value was calculated using the Student t-test.

The results of the current study showed that intrathecal bupivacaine had the lowest onset of sensory blockade, whereas the onset of motor blockade was significantly shorter with the administration of sufentanil and it was interesting that epinephrine did not significantly increase the duration of sensory and motor blockades. Recovery time from sensory and motor blockades was lower with the bupivacaine alone and no difference was observed in the highest level of sensory blockade among the groups.

It seems that intratechal bupivacaine alone has rapid onset of sensory blockade and is an adequate local anesthetic for lower limb surgeries (2). The prolongation effect of epinephrine in spinal anesthesia is still a debate; some studies support the idea while others fail to do so (7, 10, 11). The current study results, however, were consistent with those of the later studies, since the current study used a dose of 0.01 mg epinephrine added to isobaric bupivacaine; this dose was less than those used in previous studies. The current study indicated that bupivacaine alone increased the regression time and duration of blockade. There were no significant differences in duration of blockade between low-dose epinephrine and sufentanil administration; however, both provided adequate anesthetic duration. Moreover, Vaghadia et al. showed that for rapid laparoscopy, 50 µg epinephrine plus 100 mg lidocaine + 10 µg sufentanil for spinal anesthesia had no difference in intraoperative analgesia and recovery of pinprick sensation, as well as discharge time (12).

Sufentanil is widely administered as an adjuvant by intrathecal injection in different surgeries. Respiratory depression, however, is proposed as a complication. This can result from direct cephalic distribution of cerebrospinal fluid or plasma accumulation and systemic absorption of the drug (7). It is also reported that sufentanil causes sensory changes. Previous studies reported decreased sensation of pinprick and cold in labor analgesia (7, 13).

In theory, epinephrine, as an adjuvant to bupivacaine with the mechanism of vasoconstriction, prolongs the duration of spinal analgesia. Previous studies showed that the combination of epinephrine, sufentanil, and bupivacaine resulted in prolongation of analgesia and lowered the sensory blockade (2, 7). Other studies showed that low doses of epinephrine (12.5 µg) significantly prolonged the spinal analgesia for labor (6, 9, 10). However, results of some other studies suggested that epinephrine does not prolong spinal analgesia (7). However, the low-dose epinephrine administered in the current study was not adequate to prolong sensory blockade. Additionally, in other studies, higher doses resulted in complications. Previous studies showed the prolongation of both sensory and motor blockades in adjuvant of epinephrine 0.2 mg + plain bupivacaine in hip surgery (1, 14). Moreover, in some other clinical trials adding 0.2 mg epinephrine to 60 mg 2% isobaric lidocaine in outpatient knee arthroscopy prolonged sensory blockade about 90 minutes and time to discharge by 106 minutes. Similar effects were observed with bupivacaine and procaine (15); but these studies were conducted on small-dose hyperbaric bupivacaine unlike the current study; however, the current study did not reach this conclusion.

In summary, in the current study, the combination of 10 µg epinephrine and 5 µg of sufentanil plus bupivacaine did not prolong sensory and motor blockades in spinal anesthesia for lower limb surgery, compared with bupivacaine alone. Further possible benefits of adjuvants to bupivacaine in neuraxial anesthesia should be evaluated in future studies. The limitation of the current study was not using the other doses of epinephrine.

Copyright © 2018, Author(s). This is an open-access article distributed under the terms of the Creative Commons Attribution-NonCommercial 4.0 International License (http://creativecommons.org/licenses/by-nc/4.0/) which permits copy and redistribute the material just in noncommercial usages, provided the original work is properly cited.
download pdf 132.83 KB Get Permission (article level) Import into EndNote Import into BibTex
Number of Comments: 0