The most straightforward method of ascertaining arterial PO2, PCO2, and other components of blood gas is to measure them directly from a blood sample. In situations in which arterial puncture cannot be achieved or may be technically difficult, the venous blood sample can be used.

The central venous PCO2, pH, and HCO3 measured during mechanical ventilation in the intensive care unit approximate arterial values closely enough to permit the estimation of the adequacy of ventilation and acid-base status. The central venous Sat O2 does not reliably parallel the arterial Sat O2. In conclusion, venous blood sampling can potentially reduce the requirement for ABG sampling in special situations.

Arterial blood gas (ABG) analysis is used to assess oxygenation, ventilation, and acid-base status (1-3). ABG measurement is the most frequently ordered test in intensive care units. Therefore, taking an appropriate approach to this clinical test is important for the optimal care of the patients (4). The history of using and expanding arterial blood gases analysis is attributed to Severinghaus and Astrup (5, 6). Arterial blood gas analysis is a standard method for the assessment of oxygenation, ventilation, and the status of acids and bases in the body. The blood sample is usually taken through puncturing the arteries or through the implanted arterial catheter, which is accompanied by some complications such as hematoma, aneurysm formation, thrombosis, embolism, and the possibility of needle stick injury (7, 8).

When it is difficult or technically impossible, an alternative method is venous blood gas measurement. With both methods, we can obtain pH, oxygen pressure, carbon dioxide pressure, oxygen saturation, and the level of HCO3. Venous blood sampling is done easily while doing routine blood tests painlessly and without complications of arterial blood sampling. Various studies have been conducted regarding the relationship between arterial and venous blood values. Undoubtedly, determining the average of the difference in PCO2, HCO3, and pH of arterial and venous blood can be useful for managing the patients undergoing mechanical ventilation and for their weaning (9, 10).

A study in 2012 showed venous pH and HCO3 values had an excellent correlation with the values of arterial samples (11). On the other hand, a systematic review in 2014 showed that the peripheral venous and arterial PCO2 were not comparable (12).

We assume that the central venous blood has a close relationship with arterial blood. The purpose of this study was to examine this relationship in the patients who were candidates for open-heart surgery. In this study, data gathering did not impose any extra procedure because in patients under open-heart surgery, central venous and arterial catheter preparations are necessary for monitoring.

This study was conducted with the approval of the scientific and ethical review boards of Urmia University of Medical Sciences. 80 patients, who were admitted to the intensive care unit after cardiac surgery, were enrolled in our prospective analytic study. All patients were ASA (American society of anesthesiologists) physical status II - III according to the ASA’s classification system. Patients with ASA IV or more, with fever, with unstable hemodynamics, pneumothorax, hemothorax, respiratory, and heart failure were excluded from the study. In all patients, to check blood gases, samples were taken from arterial and central venous lines that were prepared in the operation room. Arterial samples were taken with 2 cc syringes, containing 0.1 cc heparin as an anticoagulant. First, air bubbles were removed and then were analyzed in 5 minutes. Simultaneously, central venous blood samples were taken and analyzed by using Nova biomedical model phox plus. All gathered data were statistically analyzed via chi-square and independent t-tests, or Fisher’s exact and Mann-Whitney U tests where needed by using SPSS version 20 software (Chicago, IL). 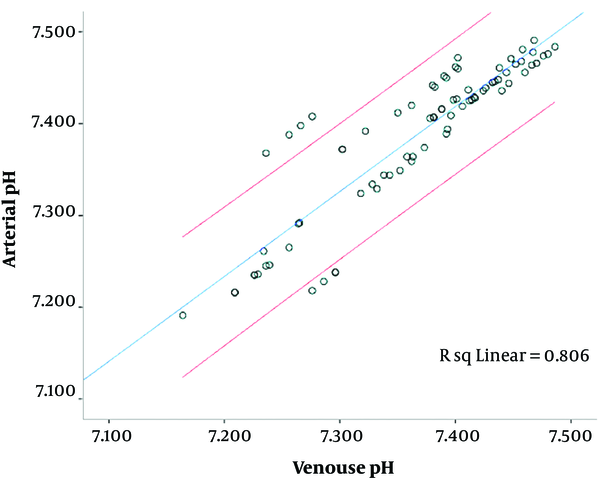 The correlation between arterial and central venous blood pH. Pearson correlation coefficient shows the intensity of correlation. If the correlation was perfect (-1 or 1), in this case, all circles would be on a straight line. 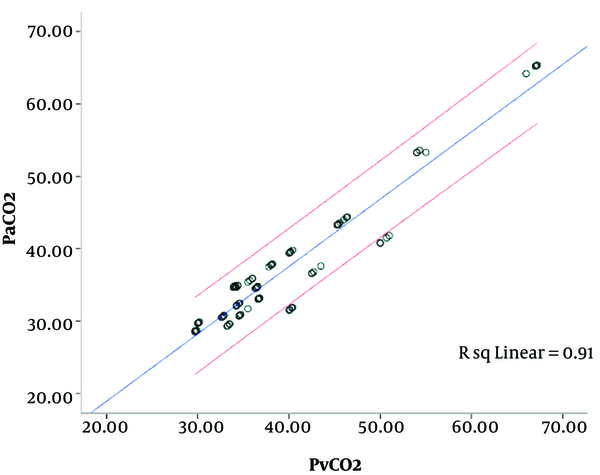 The correlation between arterial and central venous blood PCO2. Pearson correlation coefficient shows the intensity of correlation. If the correlation was perfect (-1 or 1), in this case, all circles would be on a straight line. 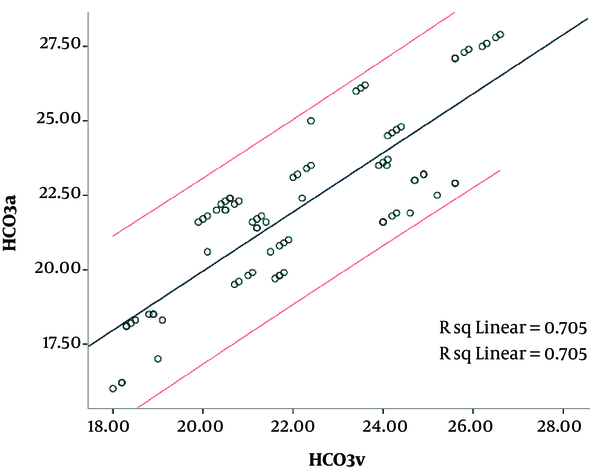 The correlation between arterial and central venous blood HCO3. Pearson correlation coefficient shows the intensity of correlation. If the correlation was perfect (-1 or 1), in this case, all of the circles would be on a straight line.

In 1961, Gombino compared capillary blood and brachial arterial blood of patients who had referred for pulmonary tests and reported that there was no significant difference between them (13). Kim et al. in 2012 in Korea determined peripheral venous and arterial blood gas correlation in ICU patients and reported that peripheral venous pH, PCO2, and HCO3 may be used as alternatives to their arterial equivalents in many clinical contexts encountered in the ICU (14). Our study results do not correlate with their studies. The difference of our study is that the blood sample was taken from the central vein and, as their studies showed, they could be taken from the central VBG in cases where ABG is not available. Nevertheless, we had a weak correlation between the mean oxygen saturation of the arterial and central venous blood. The monitoring of the mixed venous oxygen saturation (SMVO2) has been used for delivery and consumption of oxygen in critically ill patients. Most critically ill patients have a central venous catheter and the central venous oxygen saturation (SCVO2) has been used as an alternative to the SMVO2. A few studies were conducted for hemodynamic monitoring with SCVO2, but their results in various situations were different (2, 15, 16). Based on these data, the surviving sepsis campaign has recommended achieving a SMVO2 level of 65% or a SCVO2 level of 70% in septic shock patients.

Various studies have been done to evaluate patients under different conditions. For example, Kelly et al. (17) studied the correlation between arterial and venous HCO3- in patients in emergency wards who had respiratory or metabolic disorders and announced that measuring venous blood bicarbonate could be a good alternative for estimating arterial HCO3. On the other hand, the correlation between arterial and venous blood gases was studied in patients with acute exacerbations of chronic obstructive pulmonary disease (COPD), patients poisoned by tricyclic antidepressants, patients with acute respiratory failure undergoing mechanical ventilation, trauma patients undergoing mechanical ventilation, and children. Based on the results, there is a correlation between arterial and venous blood gases, and VBG can be used to evaluate and estimate their values in ABG (18-21). None of the above studies, except Maliaoski et al. (22) study, used central venous blood and none of them was done after open-heart surgery.

Copyright © 2018, Author(s). This is an open-access article distributed under the terms of the Creative Commons Attribution-NonCommercial 4.0 International License (http://creativecommons.org/licenses/by-nc/4.0/) which permits copy and redistribute the material just in noncommercial usages, provided the original work is properly cited
download pdf 328.92 KB Get Permission (article level) Import into EndNote Import into BibTex
Number of Comments: 0