Despite preventive strategies, hypotension is the most common complication of spinal anesthesia in cesarean section.

The aim of this study was to assess the effect of glucose-containing crystalloid infusion on maternal hemodynamic status after spinal anesthesia for cesarean section.

In this prospective, randomized, double-blind clinical trial, 80 parturients undergoing elective cesarean section with spinal anesthesia were studied. In group A (n = 40) ringer with 1% glucose solution (10 gr glucose in 1000 mL ringer) and in group B (n = 40) only ringer solution infused before and after spinal anesthesia. Demographic data, hemodynamic change, complications and their treatments, maternal blood sugar level and neonatal APGAR (appearance, pulse, grimace, activity and respiration) score, intraoperative fluid, duration of surgery, and anesthesia were recorded in the two groups.

The incidence of hypotension in group A was significantly lower than group B (27.5% vs 75%) (P = 0.002). Other complications (sustained hypotension, nausea, pallor, and shivering were significantly lower in parturients of the group A (P < 0.05). Maternal blood sugar (BS), before and after surgery, was not significantly different in the two groups (P = 0.207 and P = 0.239, respectively). There was no statistically significant difference in the APGAR score of neonates at the 1st and 5th minutes of the birth between the two groups (P = 0.076).

It seems that adding 1% glucose to crystalloid solution improves the hemodynamic status and decreases post-spinal anesthesia complications without significant changes in the maternal blood sugar level and APGAR score of neonates.

Hypotension decreases cerebral blood flow and may lead to side effects such as nausea, vomiting, decreased consciousness, as well as respiratory and cardiac depression in the mother. Moreover, severe and sustained hypotension can reduce the uteroplacental blood flow and ultimately lead to fetal acidosis and depressed APGAR score (8-12).

In a study, maternal cardiac output stability with colloidal solutions infusion (hydroxyethyl starch containing 1% dextrose) was better than crystalloid solutions. However, Yorozu et al. (17), did not find a statistically significant difference in comparison of preloading infusion of colloids vs ringer lactate in the prevention of post-spinal anesthesia hypotension in parturients undergoing cesarean section.

Today, it is advisable to use oral or intravenous glucose-containing solutions to provide maternal and fetal energy and accelerate the progress of labor (18, 19). In a review study, preoperative carbohydrate administration improved recovery, accelerated gastrointestinal function, and reduced hospitalization time without postoperative side effects in patients undergoing various surgical procedures (20).

Glucose decreases maternal and fetal ketone bodies that are produced due to mother’s long-term fasting during delivery (21).

Intravenous glucose-containing solutions may also reduce fetal arterial acidemia and hypercarbia and increase maternal and embryonic energy (22). It seems to prevent post-operative hypoglycemia and may not affect the APGAR (appearance, pulse, grimace, activity, and respiration) scores and the acid-base balance of the umbilical artery (23).

Recent studies have shown the benefits of administering colloidal fluid containing glucose 1% before or immediately after spinal anesthesia to improve the hemodynamic status of the mother under cesarean section (24-27). Although some satisfactory effects of perioperative glucose administration have been demonstrated in some studies, there is no certain data to indicate the effect of glucose-containing crystalloid infusion on the maternal hemodynamic. The current study was hypothesized to evaluate these effects.

After approving the ethics committee of Tabriz University of Medical Sciences, the proposal has been registered in the Iranian center of the clinical trials (IRCT201702077013N17; http://www.irct.ir).

In this double-blind randomized prospective clinical trial, the prevalence of hypotension after spinal anesthesia was considered as a primary outcome. According to Arora et al. (27), the prevalence of hypotension in the control group was 67%, with α = 0.05 for the first type of error and power of β = 0.80 for detecting the difference of 32% reduction in the incidence of hypotension after spinal anesthesia, 80 specimens were estimated. A total of 80 pregnant women in the age ranges of 18 - 40 years, with American Society of Anesthesiologists (ASA) class I, with singleton term (> 37 weeks of gestational age) pregnancy who were candidates for the elective cesarean section with spinal anesthesia enrolled in the study.

They were randomly allocated into two groups of A and B using Random list software. A total of 40 parturients enrolled in each group. The informed consent form was achieved from all women before beginning the study. Demographic charectristics including age, weight, height, body mass index (BMI), cause of cesarean section, and number of pregnancies were recorded.

In the operating room, the standard monitoring was done including non-invasive blood pressure (NIBP), electrocardiogram (ECG), and pulse oximetry (SPO2). The parturients in group A (n = 40) received 1% glucose containing ringer serum, which was prepared by adding 10 g of glucose to 1000 mL ringer before and during operation. Group B (n = 40) only received the ringer serum.

Surgical incision was performed when the sensory block level of T4 was achieved by the same surgeon in all patients.

In case of hypotension (SBP < 100 mmHg or decrease of more than 25% of baseline), 5 - 20 mg ephedrine or 50 - 200 μg phenylephrine were injected intravenously. Sustained hypotension defined as failure to respond to a single dose of vasopressor. Bradycardia (heart rate less than 50 beats/min) was treated with a dose of 0.02 mg/kg atropine. A total of 1 mg of midazolam was injected to treat agitation and 5mg metoclopramide was injected for treating nausea and vomiting.

Respiratory support was done in case of decreased consciousness and respiratory depression (SPO2 < 90%).

The 1st and 5th minutes APGAR score were recorded. In addition to the above, the total dose of vasopressors and maternal blood sugar (BS) values before and after the surgery were recorded.

Data were analyzed by SPSS 16 software. All data were reported as means ± standard deviation (SD) for quantitative variables and percentages for categorical variables (28). One-way ANOVA and independent two-sample t-test were used to confirm the effect of glucose-containing crystalloid infusion on maternal hemodynamic status. A dependent two-sample t-test was used for comparison of the variables in the two groups. P < 0.05 was considered statistically significant.

Overall, 80 parturients participated in this study. A total of six women were excluded from the study due to a BMI of more than 35 kg/m2, 4 women due to high bleeding, whom were replaced with 10 parturients that were enrolled in the study, and finally 80 pregnant women were examined with 40 in each group.

Demographic characteristics (age, weight, height, BMI) and cause of cesarean delivery and number of pregnancies were not different between the two groups (Table 1).

b Data are presented as number (%).

There were no significant differences in intraoperative fluid infusion volume, duration of surgery, and anesthesia and maximum sensory block level (Table 2).

b Data are presented as number (%).

Table 3. Comparison of Incidence of Hypotension in Measured Time Intervals After Spinal Anesthesia in the Two Groupsa

a Data are presented as number (%). 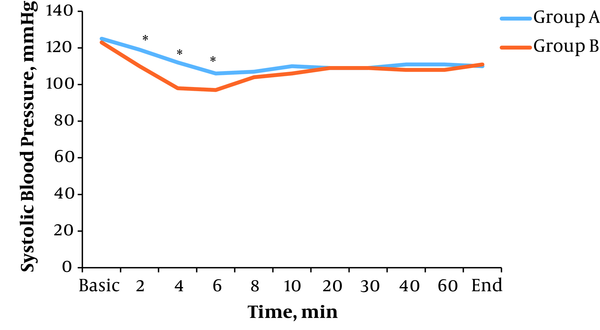 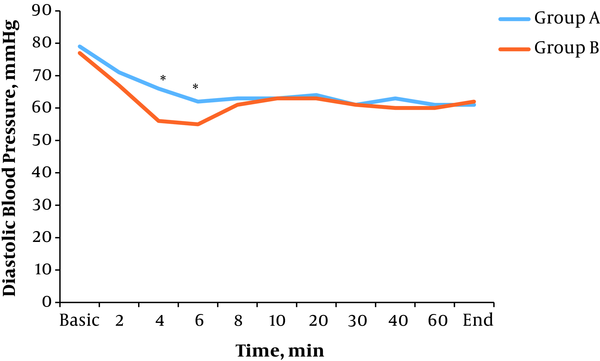 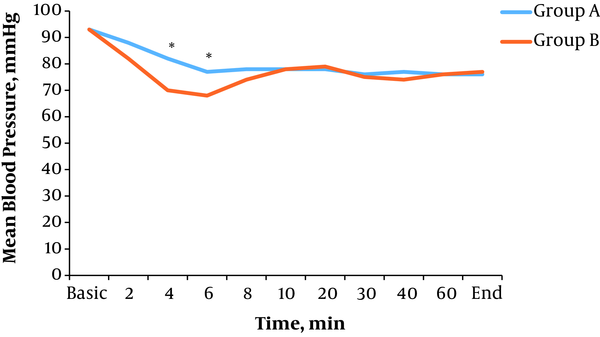 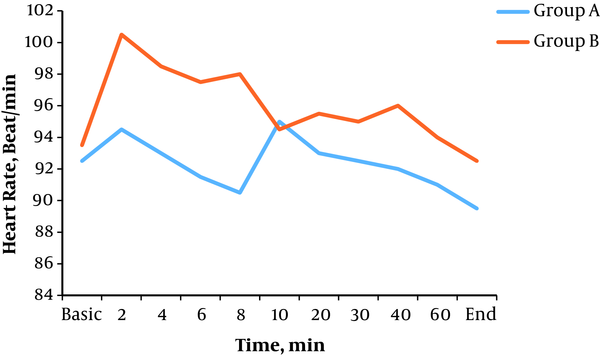 Blood oxygen saturation decreased below 90% only in one patient in group B. There was no significant difference in average basic oxygen saturation and in other time intervals after spinal anesthesia between the two groups (P > 0.05) (Figure 5). 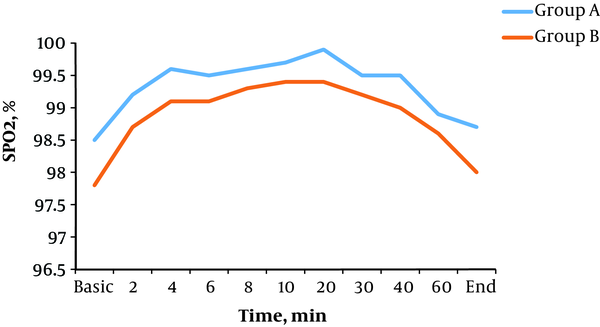 a Data are presented as number (%).

b Data are presented as mean ± standard deviation.

In assessing the drug used to treat the complications, the used dose of ephedrine (P = 0.002) was significantly higher in group B. Only one woman needed respiratory support who was in group B (Table 4).

There was no significant difference in blood sugar level before anesthesia and after the end of surgery in the two groups (P > 0.05). However, both groups had increased blood glucose levels after surgery (P = 0.001). The 1st and 5th minute APGAR score of neonates was not significantly different between the two groups (P = 0.076). Only 3 cases (8.9%) of the total neonates had a 1st min APGAR score of 7 or less than 7, all of which were in group B. None of the neonates had a 5th min APGAR of less than 8 (Table 5).

Many studies have been done on the prevention and treatment of hypotension after spinal or epidural anesthesia. However, there is no method that can completely prevent the hypotension (15-18).

In this study, the incidence of hypotension in all time intervals in group A was lower than group B (P = 0.002), which indicates improvement of hemodynamic status in the group A. Consequently, complications such as sustained hypotension, agitation, nausea, and pallor were lower in group A, and less ephedrine was used to treat complications in this group.

Gosmanov et al. (30), also studied the effects of dextrose and intra-lipid infusion and found that dextrose infusion increased blood pressure and the vascular effects that were observed with dextrose infusion depended on blood glucose concentrations.

Fathi et al. (4), in a study on patients undergoing femoral fracture surgeries who received Hetastarch or Ringer’s lactate solutions, showed that Hetastarch was not significantly more effective in compensation of hypotension induced by spinal anesthesia.

Wilson et al. (31), reported that glucose infusion does not affect the incidence of hypotension and does not facilitate its treatment. Smith et al. (20), Showed that infusion of glucose-containing solution can reduce the duration of hospitalization.

Yorozu et al. (17), did not succeed in finding positive effects of HES in preventing hypotension and reducing ephedrine doses for treatment of hypotension after spinal anesthesia, however, they found that intravenous fluid demand in use of colloid was less than ringer lactate. They reported that this effect was related to the higher viscosity of HES compared to lactate ringer, partly due to the presence of 1% dextrose in a HES solution (17).

In a study by Brenck et al. (32), that examined the risk factors for hypotension in pregnant women undergoing cesarean section, age, body mass index, and block level were effective factors in the prevalence of hypotension. However, in the present study, there was no statistically significant relationship between the above factors and the occurrence of hypotension.

By administering high-energy solutions during the perioperative period, glucose-based solutions have been shown to eliminate the effects of fasting and maintain liver glycogen and reduce the stress responses and increase the insulin sensitivity of the tissues (18, 19).

In the present study, although blood sugar levels increased after surgery, this change was within the physiological range and was not significant. Fukuda et al. (22), concluded that administration of 1% glucose, with ringer acetate to women undergoing cesarean section with epidural anesthesia, does not cause maternal hyperglycemia and it properly maintains the levels of blood glucose in newborns.

There was no significant difference between the 1st and 5th min of APGAR scores in both groups. In the Yorozu et al. and Smith et al. studies, there was no significant difference in the outcome of newborns after administration of glucose-containing solutions, which indicates that the glucose-containing crystalloid infusion has no negative effect on the outcome of neonates (17, 20).

Copyright © 2018, Author(s). This is an open-access article distributed under the terms of the Creative Commons Attribution-NonCommercial 4.0 International License (http://creativecommons.org/licenses/by-nc/4.0/) which permits copy and redistribute the material just in noncommercial usages, provided the original work is properly cited
download pdf 147.09 KB Abstract XML Get Permission (article level) Import into EndNote Import into BibTex
Number of Comments: 0