Postoperative cognitive dysfunction (POCD) is commonly observed following cardiac surgery. The utilization of cardiopulmonary bypass (CPB) is associated with many possible mechanisms to cause POCD. However, there is no evidence confirming that CPB alone is the cause of POCD.

The current prospective cohort study was conducted on 54 patients who were candidates for cardiac surgery. The assessment of memory, attention, and executive functions was performed by neuropsychological tests, before and after the surgery. Cognitive decline was defined as a 20% decrease in cognitive function in at least one of the tests. Inclusion criteria were adults spokeing Bahasa Indonesia fluently, literate, and giving consent to participate in the study. The analyzed risk factors included age, diabetes, educational level, duration of aortic cross clamp, and duration of cardio-pulmonary bypass.

POCD occured in 40.7% of subjects that underwent cardiac surgery using cardiopulmonary bypass. Age was the only influential factor through bivariate test and logistic regression analysis (P = 0.001). The current study conducted a logistic regression test on age variable; the obtained result indicated an increasing trend of POCD in accordance with age group.

Durations of CPB, cross clamp, diabetes, and educational level were not the main risks of POCD. Old age was a significant predictor to POCD.

Cardiopulmonary bypass is normally conducted during open heart surgery allowing the surgeon to evaluate the heart chambers (4, 5). The machine and the patient are connected through synthetic lines and tubes. The blood from the heart is delivered to the machine to undergo oxygen and carbondioxide diffusion (5, 6). However, this machine may cause many undesirable side effects due to the alteration in normal circulation and perfusion. There are many complications regarding the cardiopulmonary bypass machine, including the central nervous system (CNS) problems.

Age is mentioned as one of major predictors of POCD. Previsou studies mentioned that increased age was related to higher incidence of POCD, especially within six months postoperatively (10). The relationship between duration of cardiopulmonary bypass and POCD is still unknown due to the controversy of the results. However, longer duration of cardiopulmonary bypass would result in more microemboli (11). Cross-clamp duration might cause hypoperfusion and release microemboli leading to impaired cerebral blood flow.

The impact of POCD might occur a long time after the patient is discharged. Early assessment of the cognitive function as well as early detection of POCD is required. Therefore, interventions could be conducted to prevent any cognitive impairments postoperatively (2, 12).

In Cipto Mangunkusumo Hospital, cardiac surgery is conducted routinely since 2003. From 2007 to 2017, about 4326 patients underwent cardiac surgery and in 3400 of the cases the cardiopulmonary bypass machine was employed. There was no specific record on the incidence of POCD after surgery; however, there were some incidences of stroke postoperatively. This complication may impact the quality of life of the patients later on. Early detection of any predictors of POCD should be conducted to prevent such events. However, inadequate studies identified the predictors of POCD in patients undergoing cardiac surgery.

The current prospective cohort study was conducted from November 2016 to March 2017 in Cipto Mangunkusumo Hospital. The subjects were adult candidates for cardiac surgery with cardiopulmonary bypass, literate, able to speak Bahasa fluently that agreed to participate in the study. The exclusion criteria were the history of cognitive and psychiatric illnesses such as delirium, dementia, amnestic or depression, current consumption of psychotropic drugs, and impaired dominant hands. All subjects that met the inclusion and exclusion criteria were enrolled in the study.

Aging is marked by degenerative changes with decreased functional capacity (18). This process happens in all the system organs regardless of other comorbids. Results of the current study showed that geriatric patients had higher risk to develop POCD (P < 0.05). This finding was similar with those of other studies that mentioned age as a significant risk factor for POCD among patients undergoing CABG surgery (12). Moller et al. mentioned that patients aged more than 60 years had high risk to develop short-term POCD, which was a strong predictor for long-term POCD (19).

The current study developed linear regression analysis for age variable as shown in Figure 1. Results of this analysis showed that the risk of POCD increased as the age increased. The impact of aging process in the central nervous system includes decreased brain mass, neuron density, and neuron complexity. The number of serotonin, acethylcholine, and dopamine receptors also decrease along with increased postsynaptic degradation. These changes limit the capacity of the brain to respond to any stress including anesthesia and surgical stress (20). Hemodynamic changes during surgery might cause impaired cerebral blood flow leading to cerebral ischemia18. This might cause neuronal cell death and induce ischemic cascade. The cascade results in glutamate release, catabolic enzyme activation, free radicals production, apoptosis reaction, and inflammation (21). In the current study, 60% of geriatric patients already had low cognitive score and the majority of geriatric patients had significant decrease of cognitive function. 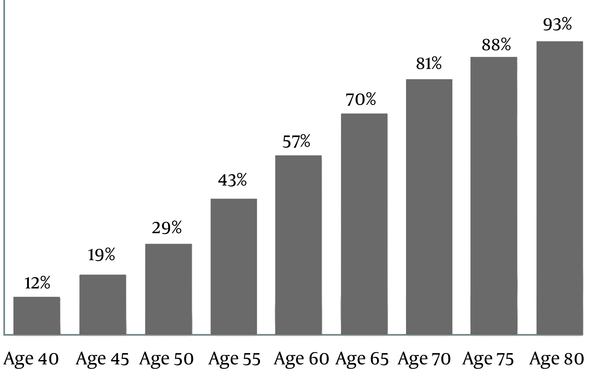 The current study also found that the number of POCD was higher among subjects with low education, which was not statistically significant. Ziyaeifard et al. also reported a similar finding (17). This might be due to limited classification of education level in the current study. Meanwhile, other studies stated that low education was more vulnerable to nervous system damage in relation with nutrition, alcoholism, comorbidity, and trauma (12). Subjects with higher education might be able to conduct better compensation strategy in the behavioural and neuronal levels (22).

Diabetes mellitus is a complex metabolic disease, which contributes to many diseases including end-stage renal disease, neuropathy, and cardiovascular diseases (23). The brain utilizes 25% of the total glucose in the body (24). Therefore, during hypoglycemic period, cell metabolism of the brain would be disrupted. On the other hand, hyperglycemia causes neuron degeneration through chronic oxidative stress (25). The current study found no significant relationship between diabetes mellitus and cognitive impairment. In contrary, other studies revealed significant relationships between diabetes mellitus and POCD (16). The severity of diabetes mellitus was not adequately analyzed in the current study; therefore, any end-organ damages due to microvascular and macrovascular changes were not elaborated in details.

Duration of cross-clamp during cardiac surgery was also believed as a predictor to POCD; during this period, the circulation is converted to synthetic circulation using the cardiopulmonary bypass machine. The application of synthetic lines and tubes causes low systemic vascular resistance (SVR). Additionally, hemodilution also occurs with low mean arteral pressure. The development of microemboli might impair cerebral blood flow (28). However, in the current study cross-clamp duration more than 90 minutes was not a significant risk factor for impaired cognitive function. Similar to the duration of cardiopulmonary bypass, the mean duration of cross-clamp was 89 ± 34 minutes. Therefore, the difference between each category was very narrow; hence, it was not sensitive to detect any effects of cross-clamp duration on POCD.

Based on the findings of the current study, it is necessary to screen for high risk patients to develop POCD during preoperative care. This preoperative screening is especially focused on geriatric patients. Assessment of preoperative cognitive function should be conducted to understand the baseline of cognitive function. It should be thoroughly explained to the patients and their families about the possible complications including POCD.

There were other factors contributing to any cognitive dysfunctions following cardiac surgery. Firstly, the current study did not include the amount of postoperative consumption of sedatives and opioids postoperatively. This might contribute to altered brain function during the recovery period. Additionally, the study did not measure the duration of hypotensive period intraoperatively. Lastly, there were several comorbidities such as hypertension, hyperlipidemia, carotid stenosis, and history of cardiovascular disease, which were not included in the analysis; the reason was that all subjects might have such comorbidities before surgery; therefore, these factors might not be sensitive to identify the risk of POCD. Further studies might be required to identify the effect of these factors. Additionally, the current study had limited subjects to observe any difference between on-pump and off-pump surgeries. Further randomized clinical trials should be conducted to determine whether cardiopulmonary bypass is a risk factor for POCD following cardiac surgery.

Copyright © 2018, Author(s). This is an open-access article distributed under the terms of the Creative Commons Attribution-NonCommercial 4.0 International License (http://creativecommons.org/licenses/by-nc/4.0/) which permits copy and redistribute the material just in noncommercial usages, provided the original work is properly cited.
download pdf 148.71 KB Get Permission (article level) Import into EndNote Import into BibTex
Number of Comments: 0