Postoperative pain is one of the major concerns about a cesarean in pregnant women that can lead to serious complications and delayed recovery for patients.

The objective is to investigate the effect of low power laser on acute pain after elective cesarean.

In this randomized, double-blind clinical trial, 80 candidates for an elective cesarean were divided randomly into two groups, control and laser. The type of surgery was the same for both groups, which contained the spinal anesthesia technique. At the end of surgery, the surgical incision in patients who were treated with laser, (GaAlAs: 804 nm and GaAlInp: 650 nm) was irradiated by laser. The control group also received laser off by the same method. Patients were monitored for 24 hours to assess the severity of postoperative pain by VAS, the first request for analgesic and the total consumption of analgesic.

Low power laser therapy is a good method to reduce postoperative pain due to the fact that it is a safe and non-invasive method which is also accepted by patients.

Postoperative pain is one of the major concerns regarding a cesarean for pregnant women (1). In addition to developing the fear in patients to consent the surgery, pain also impacts their spirits adversely (2).

The pain after cesarean delivery affects the mother's ability to feed and care for the baby, which limits her abilities. Since the risk of thromboembolism increases during the pregnancy, lack of mobility, due to pain, increases the possibility of thromboembolism for them. Chronic pain is known as a common complication after the cesarean section; however, studies have shown that 12.3% of patients experience pain six months after a cesarean. Experience of severe acute pain, especially during the first 24 hours after a cesarean, can be the cause of persistent pain and postpartum depression at eight weeks after that (3).

Currently, there are several methods to relieve pain after cesarean. The most common method of analgesics administration after surgery is applying a multi-modal approach using opioids and non-steroidal anti-inflammatory drugs, however, the use of opiates has side effects such as respiratory depression, nausea and vomiting, urinary retention and constipation. In addition, intrathecal or epidural injection of opioids, acupuncture, and patient controlled analgesia have been used to relieve pain after the surgery (5, 6).

In the present century, laser irradiation on the surgical field is one of the methods, which is used to prevent and reduce post-operative pain (7).

Light emitted by the laser does not cause heat generation and is used to treat pain and wound healing. Therapeutic effects of this method are achieved by the photochemical reactions, which lead to change in the permeability of cell membrane, increase the mRNA synthesis, and also raise the cell proliferation (9). LLLT shows the greatest potential to prevent tissue death and stimulates tissue regeneration in a wide range of diseases in neurology (10), ophthalmology (11), cardiology (12), and otorhinolaryngology (13). Many studies have found that low level laser can stimulate the respiratory cycle in the mitochondria and induces the production of adenosine triphosphate (ATP), which further reduces pain and edema (14, 15). LLLT has been effective to reduce the pain, inflammation, and edema for orthopedic injuries and degenerative diseases, for the treatment of sport injuries and musculoskeletal diseases (16, 17), for reducing postoperative pain after tibial fracture operation (18), for reducing the pain after surgery of Breast augmentation (8), for reduction of the size of keloid scar (15), and also for prevention of oral mucositis after cancer treatment (19).

The purpose of this study was to evaluate the effect of low level laser on postoperative pain after elective caesarean section.

This study was a prospective, double-blind clinical trial that was conducted during the period of 2014 - 2013. Groups of patients were selected among the admitted patients for elective cesarean from Imam Khomeini hospital in Ahvaz, Iran. Setting the power at 80% and the values for α, β, Zα, and Zβ at 0.05, 0.2, 1.96, and 0.84, respectively, the sample size was calculated to include 40 subjects in each of the case and control groups. After approval of the Ethics Committee of Ahvaz Jundishapur University of Medical Sciences (ajums.rec.1392.40) and written consent was taken from 80 pregnant women between 40 - 18 years, women with their first or second pregnancy and the American Society of Anesthesiologists (ASA) classes I and II were candidates for elective cesarean and were selected as the inclusion criteria of study. The subjects were randomly divided into two groups of 40 individuals for laser and controlled groups through a computer - generated list of random numbers. The exclusion criteria of the study included individuals determined as the patients with previous classical incision, malignancy, benign tumors with the possibility to become malignant, sensitivity to light such as lupus, history of epilepsy or seizure, the patient's refusal of spinal anesthesia, elevated ICP, coagulopathy, infection of the skin or soft tissue around the insertion of the needle, and peripheral neuropathy of lower limb. After arriving to the operating room, patients received 10 mL/kg Ringer's lactate solution. Monitoring equipment employed were electrocardiogram, pulse oximetry, and sphygmomanometer; spinal anesthesia was done with 12 mg bupivacaine 0.5% (Astrazeneca Co. Germany) in the sitting position at the L4 - L5 space with midline technique. After ensuring the neuroxial block with the lack of sense with the tip of a needle at dermatome T4, the patients were operated as by Pfannenstiel incision.

The treatment were done in the surgery room after the end of surgery and before the bandage. Laser group was treated with the combination of IR and red lasers (PLP-IR 808 nm - 200 mW, PLP-R 650 nm - 100 mW). For the control group, lasers were set to “off” during the treatment as placebo. Lasers were designed and manufactured by Canadian optic and laser center (COL Center). The power density for red laser was 0.1 W/cm2 and for IR laser was 0.2 W/cm2 (Figures 1 and 2). 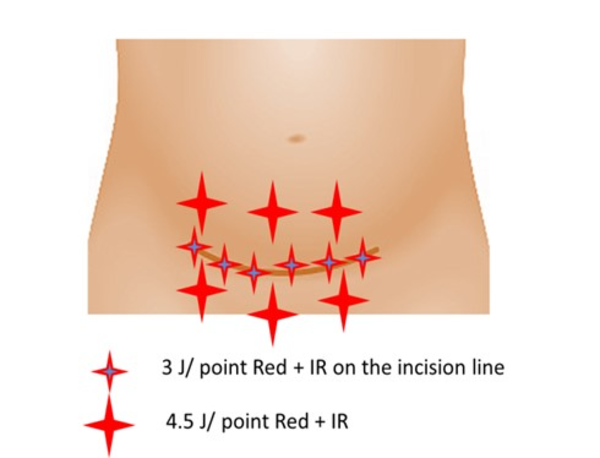 The points and locations irradiated in patients 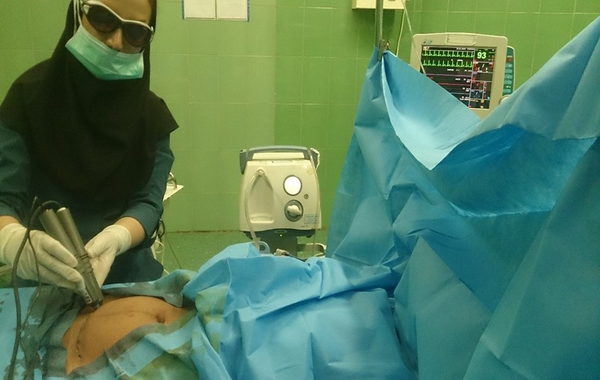 The patients and anesthesia resident who completed the questionnaires were blinded to the patient groups and did not know the study groups. Only the operator of the LLL was aware of the study group. Considering the end of anesthesia, as the onset of pain through Visual Analogue Scale (VAS), a measure, which is considered the least pain equal to zero and the worst imaginable pain of 10, were examined at 1, 4, 8, 12, 16, and 24 hours and they received intravenous Pethidine 0.3 mg/kg in the presence of pain with VAS equal to three or greater than that. The severity of postoperative pain, first request of tranquilizer, and total consumed Pethidine after 24 hours were recorded in the questionnaire by the assistant of anesthesia who didn’t know about patient groups. Side effects including nausea, vomiting, dizziness, and hypotension were also studied at stated hours.

Data were reported as the mean ± standard deviation (SD). In order to compare the groups after analyzing the normal distribution and homogeneity of variances, the Independent sample t-test, repeated measure test, and Bonferroni post hoc test were applied. Significant level of data was considered as P < 0.05. Statistical analyses were performed using SPSS software (version 16).

In this study, 80 patients were divided into two groups of laser and control. According to the results in Table 1, the two groups were similar in terms of demographic characteristics (age, weight, and height), and the duration of surgery (46.7 ± 3.4 and 47.7 ± 5.59 minutes; P = 0.71) did not differ significantly from each other.

Table 1. Demographic Characteristics of the Participantsa,b

According to the results of Table 3, the laser group needed the tranquilizer later than the control; there was a significant difference between two groups (P < 0.005).

Based on the results of Table 4, the average of total tranquilizer (analgesic) in the group receiving the laser was significantly less than the control group (P = 0.006).

The side effects of nausea, vomiting, hypotension, and dizziness weren’t also observed in any of the two groups.

In this study, the effect of GaAlAs laser, with wavelength of 804 nm and GaAllnp with wave length of 650 nm were examined on the post-operative pain of cesarean. The results showed a significant reduction of pain in the 1, 4, 8, 12, 16 and 24 hours after the operation.

In the research of Moor and colleagues GaAlAs laser with wavelength of 830 nm for 6 - 8 minutes after the operation of cholecystochetomy reduced the pain after 8, 12, 24, and 48 hours of the operation significantly; however, it wasn’t significant after one and four hours (20). In the research of Kreisler and colleagues, in 2004 on 52 patients who were treated by endodontic surgery, it was found out that GaAlAs laser, with the wavelength of 809 nm, reduced the pain in the place of surgery the after first 7 days of operation, however, the pain reduction was significant only one day after the surgery (P value = 0.04) while pain reduced in next days, however, the difference wasn’t significant (21).

Bjordal and colleagues reported in 2008 that low power laser irradiation GaAlAS, with the dose of 904 nm to the lateral elbow tendon directly, reduced the pain and improves the ability to move patients clearly (22). Hegadus and colleagues, in 2009, reported that laser irradiation (wavelength 830 nm; continuous wave; and power, 50 mW) in patients with osteoarthritis of the knee led to reduce pain and improve joint movement (16). Jackson and colleagues, in 2009, using the low power laser with 360 - 640 nm wavelengths for four minutes at the initiation and the end of breast augmentation operation and its repetition 24 hours and one week after by the same protocol and follow up of patients after 7, 14, 21, and 24 hours, demonstrated that VAS level reduced at the mentioned times, however, the differences were significant only in the first 24 hours rather than control group (P value = 0.001). The analgesics used in the first 24 hours and one week later was significantly reduced in laser group (8).

The results also showed that the first request time of analgesic, in the group who underwent laser was significantly longer than the control group (P < = 0.05).

Additionally, the average of total analgesic in the group receiving the laser was significantly lower than the control group (P ≤ 0.05).

These finding are matched with the results of studies that suggest using the LLLT, which reduces the consumption of analgesics at the postoperative period, reduces the edema and inflammation after surgery, and speeds up the healing process (24). Researches show that LLLT can cause the painless by reducing the PGE2 (21, 22), preventing the production of stimulating compounds and adjusting the inflammation process, stimulating the release of exogenous endorphin, and altering excitation and nerve conduction in peripheral nerves (25).

The results of this study showed that GaAlAs laser, with the wave length of 804 and GaAlInp laser and with wavelength of 650 nm can reduce postoperative pain and analgesic consumption after the operation. The side effects of such respiratory depression, skin reactions, analgesic nephropathy, and ulcer peptic have been seen in other forms of analgesia consumption methods, are not seen in LLLT. Finally, it is recommended that further studies should be conducted about using the LLLT in anesthesiology, due to the fact that LLL is a safe, non-invasive, and accepted method by patients.

Copyright © 2018, Author(s). This is an open-access article distributed under the terms of the Creative Commons Attribution-NonCommercial 4.0 International License (http://creativecommons.org/licenses/by-nc/4.0/) which permits copy and redistribute the material just in noncommercial usages, provided the original work is properly cited.
download pdf 237.16 KB Get Permission (article level) Import into EndNote Import into BibTex
Number of Comments: 0