Comparison of Intrathecal Injection of Fentanyl and Sufentanil on the Onset, Duration, and Quality of Analgesia in Labor: A Randomized, Double-Blind Clinical Trial

how to cite: Manouchehrian N, Rabiei S, Moradi A , Lakpur Z. Comparison of Intrathecal Injection of Fentanyl and Sufentanil on the Onset, Duration, and Quality of Analgesia in Labor: A Randomized, Double-Blind Clinical Trial. Anesth Pain Med.10(3):e99843. doi: 10.5812/aapm.99843.

Labor pain is a severe pain, and intrathecal opioid injection is one of the analgesia methods to reduce it.

We assessed the effects of intrathecal Fentanyl and Sufentanil on the onset, duration, and quality of analgesia for labor analgesia.

Intrathecal fentanyl and sufentanil have a similar analgesic effect on labor. Fentanyl is associated with a faster onset of analgesia and more satisfaction, while sufentanil has longer analgesia.

The labor pain is the most severe pain that a woman may ever experience in her life. Therefore, women fear vaginal labor (1, 2). Dilation of the inferior segment of the uterus and cervix at the first stage of labor and dilation and ischemia of the perineal and vaginal tissues at the second stage causes this pain (1, 3). Physical and psychological factors such as age, parity, fetus size, fetus position, and so on, determine the severity of the pain and its duration (3, 4). There are various methods to mitigate labor pain, including pharmacological and non-pharmacological methods. Pharmacological methods involve using Entonox, systemic opioids, and regional methods (5, 6). Regional analgesia involves spinal, epidural, and combined spinal-epidural methods that apply to induce analgesia in labor (7, 8). In spinal analgesia, single-dose injection of opioids alone or in combination with a lower dose of anesthetics to the subarachnoid space causes rapid and effective analgesia during labor (8, 9). Hypotension is the most common complication of spinal anesthesia and analgesia (10, 11). Administration of opiates alone, which does not have any effect on the sympathetic block, is a common method to decrease the incidence of hypotension and fetal complications (12). Intrathecal opiates are a popular choice for labor (13). Fentanyl and sufentanil are fat-soluble opioids used in spinal anesthesia and analgesia (14, 15). Most of the previous studies conducted on these drugs investigated them in combination with low doses of local anesthetics in surgical operations, while few studies compared the intrathecal effects of these opioids on the onset, duration, and quality of analgesia for labor (13-15).

The current double-blind, randomized study aimed to compare the effects of intrathecal injection fentanyl and sufentanil on the onset, duration, and quality of analgesia for labor.

After approval by the Ethical Committee of the Hamadan University of Medical Sciences (code: IR.UMSHA.REC.1397.223 & IRCT20120915010841N10) and taking written informed consent from participants, this double-blind, randomized clinical trial was conducted at Fatemieh Hospital of Hamadan in 2018. Data were collected using a researcher-made checklist following the research objectives and variables. Subjects were selected using the convenience sampling method, and the sample size was estimated to be 54 (27 patients in each group). All patients were nulliparous, 18 - 45 years old with American Society of Anesthesiologists physical status I or II, at term gestation (37 - 40 weeks), candidate for vaginal delivery under spinal analgesia and in active labor, with a cervical dilation more than 5 cm when requesting labor analgesia.

Using block randomization with a block size of six for each group, patients were randomly allocated to one of the sufentanil (S) and fentanyl (F) groups. We chose a block randomly, and the first six treatments were allocated according to the block. Then a new block was chosen randomly, and the next six treatments were allocated. The process continued until the allocation of all subjects to a group. Before spinal analgesia, systolic and diastolic blood pressure, heart rate (HR), respiratory rate (RR), and blood oxygen saturation (SPO2) were measured (by non-invasive blood pressure and ECG monitoring, Saadat, Made in Iran) and recoded. Pain score, fetal heart rate, and sedation score before spinal analgesia were recorded in the checklist. Then, the spinal analgesia was performed using the Quinke no.: 26 needle in the L3-L4 or L4-L5 space in the sitting position. The F group received 1.5 mL (75 µg) fentanyl (Feniject, Aburehan, Iran), and the group S received 1.5 mL (7.5 µg) sufentanil (Sufiject, Aburehan, Iran). All intrathecal injections were administered in a 1.5 mL volume. Besides, similar syringes were prepared by an anesthetic nurse according to the block randomization list and were intrathecally injected by an anesthesiologist who had no awareness about the type of drug. After spinal analgesia, pain score (measured using Visual Analog scale (VAS)), blood pressure (systolic, diastolic), HR, RR, fetal heart rate (FHR), SPO2, and sedation score (by Ramsay scale) were assessed every 5 minutes for three times and then were assessed every 15 minutes up to 135 minutes. FHR (measured by fetal cardiac monitoring device), pain relapse time, frequency and severity of pruritus (using the VAS), nausea and vomiting, shivering, patients’ satisfaction, Apgar of the neonates (first and fifth minutes), duration of the first and second stages of labor and the rate of cesarean section were recorded in the checklist. When the analgesic effect was over, and the patient's pain returned (VAS ≥ 6), drugs such as Pethidine (intravenously) or Entonox were administered, depending on the patient’s condition and the progress of the delivery. The pain intensity was assessed using the VAS. In the current study, VAS was measured by using a 10 cm ruler, the score was determined by measuring the distance on the 10‐cm line between the zero and the patient’s mark, therefore scores ranged from 0 - 10, “no pain” on the right side (i.e.) and “worst possible pain” on the left side (i.e. 10). To assess the severity of pruritus, the VAS approach was used, the same as the methodology used for assessing the pain. In this way, patients mark a number on a 10cm ruler based on the severity of their pruritus. The following VAS category was proposed: 0 = no pruritus, > 0- < 4 points = mild pruritus, ≥ 4- < 7 points = moderate pruritus, ≥ 7-< 9 points = severe pruritus, and ≥ 9 points = very severe pruritus. Patients’ satisfaction (subjective assessment of the quality of neuraxial labor analgesia) was defined as a numerical rating scale as a percentage (0 to 100%) reported by the parturient at post-delivery in recovery. Parturients with reported satisfaction lower than 80%, 80% - 90%, and greater than 90% were considered as not satisfied, satisfied, and very satisfied, respectively. Sedation was assessed by Ramsay sedation scale as follows (Table 1):

Data were analyzed using SPSS software version 16. To compare pain, Apgar, and sedation scores, and duration of the first and second stages of labor, t-test and Mann-Whitney tests were used. Chi-square and Fisher’s exact tests were used to compare the frequency of complications, fetus bradycardia, and satisfaction. A P value of less than 0.05 was considered statistically significant. 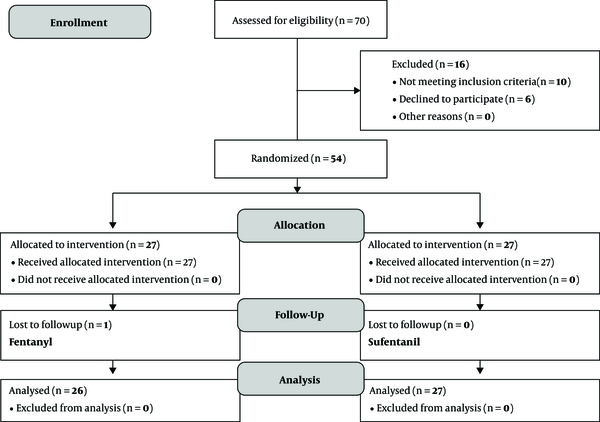 Flowchart of the trial (consort chart)

Table 2. The Onset and Duration of Analgesia and Frequency of Maternal Side Effects in Sufentanil and Fentanyl Groupsa

Table 3. Comparison of Pain and Sedation Score in Sufentanil and Fentanyl Groups Based on Measurement Timea

aValues are expressed as median ± IR.

Table 4. Comparison of Systolic and Diastolic Blood Pressure, HR and FHR in Sufentanil and Fentanyl Groups Based on Measurement Timea

Table 5. Comparison of Mean Duration and Pain Score of the First and Second Stages of Labor in Sufentanil and Fentanyl Groupsa

Intrathecal fentanyl and sufentanil have a similar analgesic effect on labor. Fentanyl is associated with a faster onset of analgesia and more satisfaction while sufentanil has longer analgesia.

This research is derived from a thesis that was financially supported by the Hamadan University of Medical Sciences, Hamadan, Iran.

Copyright © 2020, Author(s). This is an open-access article distributed under the terms of the Creative Commons Attribution-NonCommercial 4.0 International License (http://creativecommons.org/licenses/by-nc/4.0/) which permits copy and redistribute the material just in noncommercial usages, provided the original work is properly cited.
download pdf 156.51 KB Get Permission (article level) Import into EndNote Import into BibTex
Number of Comments: 0