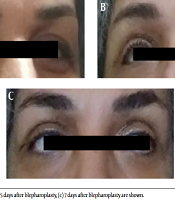 Blepharoplasty, which is performed for either functional or cosmetic purposes, is one of the most common surgeries around the world. This procedure can be performed under either local or general anesthesia. It depends on the surgical indication, patient’s demand, surgeon’s plan, and need for auxiliary operations. It has been proved that both local and general anesthesia have different complications. Hypnosis is a skill by which hypnotherapists can make changes in perceptual experience and can be used instead of anesthetic drugs on some occasions. The present study was conducted to survey the effectiveness of hypnosis used as an alternative to anesthesia procedures.

Hypnosis may be a good alternative to local anesthesia and lead to a reduction in analgesics consumption.

Blepharoplasty, which is performed for functional or cosmetic purposes, is one of the most common surgeries around the world. It helps people get rid of excessive skin, which leads to symptoms such as circles around the eyes, droopy eyelids, or tired-looking eyes. Improvement in appearance and visual function is the best benefit of blepharoplasty with a great effect on persons’ quality of life (1). This procedure can be performed under either local or general anesthesia. It depends on the surgical indication, patient’s demand, surgeon’s plan, and need for auxiliary operations. Local anesthesia is preferable for simple upper or lower eyelid blepharoplasty, while general anesthesia or intravenous sedation is prescribed for more invasive procedures such as fat repositioning and mid-face lifting (2).

It has been proved that both local and general anesthesia have different complications, and finding new strategies to reduce intra- and post-operative complications is one of the important challenges that need to focus on it (3, 4). Hypnosis is a skill by which hypnotherapists can make changes in perceptual experience. It can be used as an anesthetic procedure solely or in combination with local anesthesia in patients undergoing different surgeries. Recent studies have shown that one of the benefits of this approach is avoidance of general anesthesia and its potential complications that become apparent during or after surgery (5-7).

Moreover, hypnosis has shown positive results for disease management and suitable effects on pain management for acute and chronic pain (8, 9). The medical use of hypnosis has been approved by the British Medical Association and the American Medical Association (10). Herein, the authors of this study present a case of bilateral upper lid cosmetic blepharoplasty that was successfully performed under hypnosis.

A 54-year-old woman was presented to an ophthalmologist for bilateral upper lid cosmetic blepharoplasty in Khatam Al-Anbia Hospital, Mashhad, Iran. The patient was offered to undergo local anesthesia, but hypnotic anesthesia was programmed because of her fear of anesthesia and drug-related side effects. It is worth mentioning that in this study, the hypnotherapist and anesthesiologist were the same person (the first author) and had experience over a decade in hypnotherapy. At a session before surgery, a clinical interview with the hypnotherapist was implemented to measure the hypnotic susceptibility in the patient by taking an arm levitation test. Written informed consent was obtained after a full explanation of the process and before the study.

The day before the surgery, a preoperative visit and routine examination were done. She had no remarkable medical history, and examination showed no unexpected findings. In the operation room, the minimum standards for monitoring the patient during anesthesia were continuous electrocardiography, pulse oximetry, non-invasive blood pressure measurement. Moreover, a bispectral index (BIS) monitor was utilized to assess the level of consciousness. The BIS monitor is a quantitative EEG index that is utilized to measure the depth of anesthesia by analyzing the encephalographic signals (11). Sedative and local anesthetic drugs were accessible to use in case that the patient complained of pain.

Hypnotic induction was accomplished through the eye fixation technique by using appropriate verbal stimulation. Suggestions were given for comfort, in which the patient had to imagine walking in a garden alongside her son and daughter. At the next step, when a deep hypnotic state (trance state) was maintained, surgery was started. The patient underwent bilateral upper lid cosmetic blepharoplasty with fat excision.

Table 1. Healthcare-related Parameters During the Operation

The operation was terminated at 40 minutes, and at the end of the operation, conditioning was used to induce post-operative analgesia, and the patient was suggested to have no pain in the eyelids 48 hours after surgery. Bilateral upper lid cosmetic blepharoplasty was done without surgical complications, and the patient did not report any complications in the next days. The patient was monitored cautiously for 8 hours after the operation and was discharged under good general condition. The follow-up visits revealed no use of analgesics and full sedation postoperatively. The patient was visited on the day five and seven following the surgery and sutures were removed seven days after the surgery. As shown in Figure 1A, the patient suffered from excessive skin on both upper lids. Figure 1B displays the patient on day five following the surgery with no complications. On day seven, sutures were removed, and no complications were reported (Figure 1C).

Although numerous investigations have been conducted to clarify prognostic parameters of general anesthesia complications, unpredictable side effects occur and vary widely from benign to catastrophic (12). General anesthesia is a high-risk procedure for respiratory function impairment for the reason of using mechanical ventilation (4), while one of the most important benefits of hypnotic anesthesia is the lack of need for mechanical ventilation. Cognitive dysfunction and delirium are other post-operative complications of both general and regional anesthesia as consequences of the usage of anesthetic drugs (13).

Local anesthesia also has its adverse reactions such as pain, edema, bruise, infection, hyperalgesia, and muscle Trismus due to needle penetration in the skin and some adverse reactions that are related to the complications such as local or systemic toxicity, allergic and idiosyncratic reactions (3). Lidocaine is widely used as an anesthetic choice for blepharoplasty because of a rapid onset of its effect (1.5 min), intermediate length of efficacy (1.5 - 2 h), and good toleration (14). However, allergic reactions to lidocaine are rising in prevalence because of the growing application of this group of medications or the possibility of re-exposure to various substances characterized by a similar chemical structure. This phenomenon makes the risk of using this agent higher for anesthesiologists in surgical procedures (15).

Several studies have shown that hypnosis can change an individual's perception of pain and make a significant reduction in postsurgical pain intensity, the consumption of analgesics, and rates of post-operative pain in patients who underwent hypnosis during the entire surgical procedure (16, 17). A meta-analysis study revealed that patients who received hypnosis during the surgical operation had comparable advantageous outcomes rather than the others. It was revealed that the application of hypnosis in patients resulted in a significant impact on variables such as anxiety, pain, analgesic usage, recovery time, and treatment time (18). Hypnosis comes into operation by changing the activation and connectivity of neuromatrix areas related to pain, including the amygdala and thalamus, striatum ACC, putamen, insula, prefrontal cortex, parietal cortex, contralateral somatosensory, and premotor cortices. The analgesic effect of hypnosis may be due to the reduction in activation of ACC, striatal, and thalamic areas (7, 19).

The BIS monitor shows the consciousness level of a patient that is usually needed to maintain between 40 to 60 in general anesthesia. BIS score upper than 60 demonstrated light anesthesia, and as it approaches 100, it shows a completely awake state (11). In this study, the BIS scores of the patient showed that she was fully awake during the surgery; meanwhile, she was in communication with the hypnotherapist, and no sign of pain or discomfort (neither verbal nor facial) was expressed by the patient.

In conclusion, hypnosis is a safe and cost-effective modality, especially when it is practiced by a well-trained, experienced, licensed healthcare provider and may be used as an alternative to local or general anesthesia (7, 21, 22). In this study, the surgery was performed successfully without any complications and with the advantage of no need for analgesia postoperatively as the patient reported the lack of pain. It is concluded that hypnosis is a good alternative to local anesthesia, and it may help reduce the consumption of analgesics.