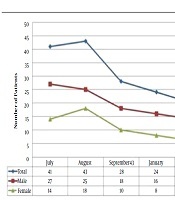 Statistical Comparison of Stroke Patients Visiting an Emergency Department During Summer Versus Winter: A Cross-Sectional Study

In the present study, we aimed to compare the number of brain stroke cases presenting to the Emergency Department (ED) of a major referral hospital in Tehran during summer and winter.

A cross-sectional retrospective hospital-based study was carried out in 2016 - 2017 in Tehran, Iran. The study population consisted of all patients admitted with a diagnosis of brain stroke. The data of all patients were extracted from their medical profiles and analyzed via SPSS V.16 software using descriptive statistics (mean and percentage).

Comparing the prevalence of brain stroke in summer and winter in this study showed that the frequency of brain stroke was significantly higher in the three months of summer (warm season) than winter (cold season).

Many studies have assessed different aspects of stroke disease, including its etiology and pattern of incidence, as well as the correlation between stroke incidence and different seasons and months of the year (1-9). The probable role of temperature changes has been proposed as the most important cause of seasonal changes in the prevalence of brain stroke. It has been said that temperature changes can affect biologic parameters such as blood pressure, plasma fibrinogen concentration, platelet adhesiveness, and serum lipid, on the one hand, and the seasonal pattern of epidemic influenza, air pollution, and other respiratory infections, on the other hand (10, 11). Throughout the past three decades, extensive research has been done to determine the effect of seasonal changes on brain stroke incidence. These studies have shown that brain stroke, especially intracerebral hemorrhage, happens with a higher frequency in winter; however, little studies have assessed ischemic brain stroke (12).

In the present study, we aimed to compare the number of brain stroke cases presenting to the Emergency Department (ED) of a major referral hospital in Tehran during summer and winter.

A cross-sectional retrospective study was performed in 2016 - 2017 in Shohaday-e-Tajrish Hospital, Tehran, Iran. The study received ethical approval from the Ethics Committee of Shahid Beheshti University of Medical Sciences (code IR.SBMU.MSP.REC.1396.77). Ethical principles, including the confidentiality of data, were adhered to throughout the study.

Samples were selected via a census method. The study population consisted of all patients hospitalized with a diagnosis of brain stroke. Patients who had faced a drop in their consciousness level or paresis due to seizure, hypoglycemia, trauma, and shock were excluded from the study.

The data of all brain stroke patients were extracted from their medical profiles using a checklist, including sex, age, history of illness, type of brain stroke, rate of paresis, and admission date (season and month). The checklists were filled out by one of the researchers.

In this study, we enrolled 179 patients with a mean age of 68 years and a standard deviation of 14.51 years (age range: 25 to 92). Of them, 111 (62.0%) cases were male and 69 (38%) cases were female (P < 0.001). Overall, the rate of brain stroke was 63% in summer and 37% in winter among the studied cases. Table 1 shows the frequency distribution of studied patients in summer and winter based on age. According to the obtained results, the highest percentage of brain stroke belonged to patients ≥ 71 years, and the lowest percentage belonged to patients < 30 years (P < 0.001). The prevalence was higher in summer than in winter in all age ranges, except for under 30 years that made up a very small percentage of the patients. Moreover, the prevalence was highest in August and lowest in February.

Table 1. Frequency Distribution of the Brain Stroke Patients in Summer and Winter Based on Age

The results of the K-S test showed that the month, sex, and season data did not have a normal distribution. Therefore, non-parametric tests were applied for evaluating between-group differences. Considering the results of the Friedman test, there was a significant difference between the intended/various months regarding the number of brain stroke cases (P = 0.014). Figure 1 depicts the frequency polygon chart of brain stroke patients’ distribution in various months, as well as summer and winter seasons, based on sex. As shown, there was a decreasing trend in stroke cases in the months of winter compared to summer. Considering the obtained results, the percentage of patients with brain stroke was highest in August and lowest in February. However, based on sex, the highest and the lowest rates of brain stroke in women happened in August and February, respectively; in contrast, the highest percentage of male stroke cases was recorded in July and the lowest percentage in March. The rate of brain stroke was higher in men throughout all months, except for March. 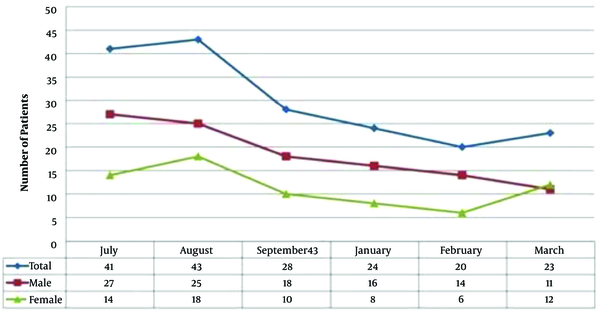 Ogata et al. concluded that Lacunar and atherosclerotic types of brain stroke were more prevalent in summer, and the rise in temperature might lead to an increase in platelet adhesion and consequently a rise in the formation of blood clots. Moreover, the cardioembolic type of stroke had a higher prevalence in winter that could be related to the increase in the prevalence of respiratory infections in winter. Respiratory infections can also increase plasma fibrinogen and anti-cardio lipid antibody and decrease protein C (13).

Furthermore, in our study, we compared different age groups concerning brain stroke incidence. We divided patients into four groups of 30 years or lower, 31 to 50 years, 51 to 70 years, and 71 years or over. Patients in the age group of 71 years or older showed a significantly higher prevalence. The number of affected patients dropped with a decrease in age. Yet, for all age groups, the prevalence was higher in summer. In studies by Turin et al. and Oberg et al., 75% and 85% of the patients, respectively, aged more than 65 years. Also, in Ogata et al. study, the average age of the patients was 70 years (11, 13, 14).

Hospital registry systems have significantly advanced in recent years, but they still have limitations, and we faced problems when performing computer searches. The problem was that all patient characteristics were not searchable, or all of the patients’ data were not registered when they had presented to the hospital. Moreover, the registration of brain stroke patients on the registry system of the hospital was not done with sufficient accuracy. Among other limitations of this study is its single-center design. Only patients presenting to a single hospital were assessed while performing multi-centered studies in different hospitals, or even cities in Iran can give a better view regarding the statistics of brain stroke patients in different seasons. In this study, only summer and winter seasons were evaluated; by adding spring and fall, we can reach stronger conclusions in this regard.

In this study, we concluded that the prevalence of brain stroke was significantly higher in summer than in winter. In addition, its prevalence was highest in August and lowest in February.