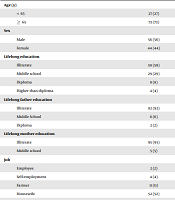 Several studies have investigated the association of heavy metals such as lead and cadmium with neurodegenerative diseases such as Parkinson's disease.

In this study, we investigated the relationship between the serum levels of lead and cadmium in Parkinson's disease.

In this case-control study, the serum levels of lead and cadmium in 100 patients with Parkinson's disease referred to our university hospital, and 30 healthy individuals were investigated. Basic information such as age and gender and other demographic and clinical data were registered in the checklist. The levels of lead and cadmium were measured using atomic absorption spectrophotometry (AAS). Data was analyzed by SPSS software version 23, and a P < 0.05 was considered as significant.

Based on the findings, the levels of serum lead and cadmium were higher in the patients, indicating a probable relationship between the Parkinson's disease and the levels of these metals.

Parkinson's disease (PD) is a progressive neurodegenerative disorder that affects 0.3% of the global population over 40 years of age. About 7.5 million people worldwide and one million people in the North America suffer from it (1-6).

In the early stages, an area of the brain called the substantia nigra progressively involves in the disease and increases over time (7). The neurological manifestations of the disease seem to be due to the alteration of inhibition and stimulation patterns in the basal ganglia and their association with direct and indirect pathways in this area. Dopamine and acetylcholine act as neurotransmitters in this area. In idiopathic Parkinsonism, the balance of these two substances that interact with each other is impaired, and dopamine depletion occurs in the nigrostriatal system (8).

There are numerous environmental factors contributing to PD etiology, including toxic metals. Amongst all, lead (Pb) has shown a neurotoxic effect via passing over the blood-cerebrospinal fluid barrier (BCB), accumulating in choroid plexus (CP), disrupting the prefrontal cerebral cortex, hippocampus, and cerebellum leading to several neurodegenerative disorders (9, 10). The neurotoxic potential of Pb is due to the interference with several neurotransmission systems, including those of dopaminergic, cholinergic, and glutamatergic (11). According to occupational exposure data, the risk of PD increases along with whole-body lifetime exposure to lead (12). It has also been reported that cumulative lead exposure can significantly increase the risk of PD (13). A recent meta-analysis reported that exposure to lead is involved with 50% increased risk of PD (14).

Cadmium (Cd) is another neurotoxic metal associated with various neurological diseases. Cadmium is known to induce oxidative stress as a result of inhibiting the activity of acetylcholinesterase enzyme along with the depletion of glutathione, superoxide dismutase, and other antioxidants in central nervous system (CNS) (15). The association of Cd exposure with risk of developing several neurological symptoms, including parkinsonism has been reported (16). This element can cause some neurological disorders through neuronal apoptosis, damage to the neural pathways, including the mammalian target of rapamycin (mTOR), and the production of the reactive oxygen species (17).

If we can find a relation between the serum levels of these metals and PD, it can be used as one of the most preventable factors in the development of this disease. Hence, the present study aimed to determine the serum lead and cadmium levels in Parkinson's patients and compare them with those of the healthy controls.

This case-control study was conducted on PD patients and healthy controls during 2017 - 2018 in our university hospital. A total of 100 PD patients and 30 healthy controls were randomly assigned into two groups. The demographic information (age, sex, education, place of residence, marital status, and smoking) and clinical data (duration of the disease, stages of the disease, severity of disease, type of medication, and duration of use) were collected from the patients. About 5 mL of peripheral blood was taken from each person, and plasma was separated immediately, then centrifuged and stored at -80ºC until further analysis.

3.1. Measuring the Serum Levels of Lead and Cadmium by Atomic Absorption Spectrophotometry

Table 1. Thermal Cycle Used to Measure the Cadmium in Samples

Table 2. Thermal Cycle Used to Measure the Cadmium in Samples

The inclusion criteria were the definitive diagnosis of PD with the clinical examination and clinical history of the patients as determined by a neurologist. The exclusion criteria included Parkinson's syndromes caused by neuroleptics or Parkinson's syndromes with known causes (vascular causes) that are not a primary idiopathic PD, as well as the patient's unwillingness to continue participating in the study.

3.3. Assessment of the Severity of PD

The severity of PD was assessed using the Unified Parkinson's Disease Rating Scale (UPDRS) and the Hoehn and Yahr Scale (HYS) according to Table 3 (18).

Data were analyzed using the SPSS software version 23 (SPSS, IBM Company, USA). Qualitative and quantitative statistical tests were used by this software to analyze the variables. The quantitative continuous variables were expressed as mean ± SD, and the distribution of qualitative frequency was expressed as percentages. Independent t-test was used to compare the serum levels of lead and cadmium in groups. Independent t-test is used to determine a statistically significant difference between the means in two groups. A P < 0.05 was considered as significant.

Table 4. Demographic Data of PD Patients and the Control Group a

Table 5. Frequency of the Clinical Information and Severity of Disease in PD Patients
Table 6. The Mean Age, Duration of Disease, and Cadmium and Lead Levels in Patient and Control Groups a

Table 7. The Cadmium Level (ppb) by Gender, Age and Residence in Patient and Control Groups, and the Priority Sign of the Disease and Severity of the Disease

Based on the findings of this study, the lead and cadmium levels were significantly higher in PD patients than in healthy subjects (P < 0.001). Accordingly, there was no significant relationship between the severity of PD stages in the serum levels of the lead or cadmium, as well as the serum levels of the lead and cadmium in patients with the symptoms of tremor bradykinesia, rigidity, and gait disorder. However, those who did not have these symptoms were not significantly different.

In previous studies, exposure to lead has been accompanied by reduced intelligence, memory, analysis, reading, visual, motor, and other skills. Moreover, the exposure time of this metal was found to be effective in creating anxiety, depression, and phobias (11). Cadmium also plays a major role in neurobiology and poisoning, and it can have a potential role in neurodegenerative diseases, including PD. The neurotoxic role of the cadmium has been multiplied by the biochemical changes in the cells and functional changes in the CNS, which indicates the potential role of neurotoxic effects of systemic poisoning in exposure to chronic conditions (19).

There are some reports consistent with the present study (12, 20). Kumudini et al. measured the serum levels of several metals, including lead, in PD patients and healthy subjects (20). The serum lead levels in this study were twice as high as the normal, but no significant difference was found. They concluded that oxidative stress from metals such as lead can be a potential risk factor for PD. Also, consistent with our findings, they reported higher lead levels in urban patients and concluded that this was related to the industrial pollution and cars.

In another study (12), the risk of PD was twice as high in subjects exposed to high levels of the lead after adjusting for age, gender, race, smoking, coffee, and alcohol. The researchers analyzed the serum levels of lead and its bone concentration in PD patients, but no significant difference was found between the patients and healthy subjects. They reported that occupational exposure to the lead is strongly associated with the risk of PD, and finally concluded that lead can be a risk factor for PD.

There are several other studies investigating the effects of lead or cadmium in diseases such as PD (19, 21-28). In 2014, Palacios et al. examined a group of nurses who had exposure to neurotoxins, including lead and cadmium, from 1990 to 2008 to assess PD risk. No significant association was found between the exposure to these metals and an increased PD risk (23).

In a study conducted by Willis et al., the PD occurrence was higher in the states with higher levels of pollution, while in states with a low level of pollution, the incidence of disease was lower. They reported that they were not able to establish a direct link between the PD and lead industrial exposure, but suggested that the lead is still a neurotoxin for the basal ganglia and is a risk factor for PD (22).

Dhillon et al. investigated the possible association of PD in subjects exposed to pesticides and cadmium, and concluded that exposure to cadmium in pesticides correlated with the risk of PD (21). Gorell et al. determined the association between occupational exposure to multiple metals and the PD risk. Their results showed that chronic contact with metals such as manganese and the copper alone or in combination with the lead was associated with an increased risk of PD. Also, the lead alone was not a risk factor for PD (25-27). In an overview by Bjorklund et al. in 2018, the role of metals such as mercury and lead in the occupational exposure and people suffering from PD was discussed. It was also mentioned that the combination of metals such as mercury with lead and cadmium can increase production of various oxidative factors (28). In a study by Firestone et al., there was no relationship between exposure to the lead alone or in combination with metals such as copper and manganese with the risk of PD (24).

While some studies indicated that exposure to lead or cadmium is not associated with the risk of PD, several other studies concluded that lead in combination with other metals can increase the risk of PD.

In our study, the number of healthy subjects was relatively low (n = 30) compared to the patients (n = 100). Also, we were not able to evaluate the exact source of the metals exposure in included subjects.

Based on the findings of this study, there was a higher level of serum lead and cadmium in PD patients compared to the control group. This finding was observed for both genders and at different ages. Therefore, it seems that exposure to lead and cadmium may be associated with an increased risk of PD. It is extremely recommended that groups exposed to the lead and cadmium, including occupational exposures, be considered for PD risk.

The authors would like to express their gratitude to the Clinical Research Development Unit of Rouhani Hospital in Babol, Iran.