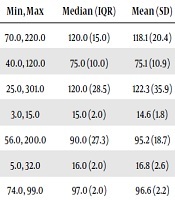 One of the most frequent complaints that emergency medical services (EMS) deal with is seizure. The missions of EMS on these cases may lead to transferring the patient to the emergency department (ED).

Therefore, the present study was conducted to compare the short-term outcome of transported versus not-transported cases.

Our population sample was selected retrospectively from medical records in Tehran EMS center for 6 months in which the plan was transferring to a specific hospital. The cases were divided into transported or not-transported. W extracted and compared the cases’ demographic data, vital signs, conducted prehospital management, patient disposition, and their short-term outcome.

Seizure is one of the most common incidents in the general population. Approximately 10% of Americans experience at least one episode of seizure attack in their lifetime (1, 2). It is one of the recurrent complaints in the emergency medical services (EMS). Thus, it is necessary for EMS to be able to manage seizures as seizure calls reach up to 5% to 8% (3). Reportedly, 71% of these calls finally led to patient transportation to the hospital (4). However, it should be noted that EMS missions have been increased nowadays, and whether or not it is correct to transport all patients to the hospital is a major concern. A long time ago, in England, EMS was not allowed to leave the patients at the scene, and they had to transport all to the hospital (5). Such a policy could lead to overcrowded emergency departments (EDs). On the other hand, in the US, 70% of patients referred to EDs were released on the day of admission (6). Although many protocols are available, still further studies are required to determine the criteria for transportation decision making (7, 8). Currently, there are no specific criteria to help paramedics to decide about safely leaving seizure patients at the scene. To the best of our knowledge, there is no study comparing the outcome of transported and not-transported seizure patients in Iran (9, 10). There is not a clear guideline on discharging at the scene in Iran, emergency medical technicians (EMTs) should make an online consultation with on-call EMS physician.

Therefore, in this study, we decided to compare the short-term outcome of transported seizure patients versus not-transported ones.

The present study was a retrospective cohort investigation conducted on patients with a chief complaint of seizure. Their medical records from Tehran EMS center and Imam Khomeini Hospital Complex, Tehran, Iran were evaluated for 6 months from April 2019 to October 2019. The study by the Ethics Committee of Tehran University of Medical Sciences and the ID was IR.TUMS.VCR.REC.1397.985. All the information was collected, analyzed and reported anonymously.

The patients who called EMS with the complaint of seizure and asked for an ambulance, whose plan was transferred to the mentioned hospital were included in the study. The transfer decision was made by the dispatch doctor, whom EMT calls in all cases and asked for the necessity of transportation. Based on EMS report and dispatch data, patients were divided into 2 groups: the first group included the cases not-transported to the hospital and the second group involved those who were transported to the hospital. Medical files were selected during this 6-month interval based on the existing census. Exclusion criteria were: missing data in the medical records, patient’s death at the scene, referring to another hospital except our 2 study environments, seizure due to trauma, and pregnant patients.

Data were presented as mean ± SD or median (interquartile range (IQR)). The data were analyzed by appropriate parametric or nonparametric tests with SPSS V. 22. The level of significance was 0.05.

In this study, data from 486 cases were evaluated. Flowchart of the study population is shown in Figure 1. In this population, there were 173 male (35.6%) and 313 female patients (64.4%). The mean ± SD of age was 34.8 ± 32.0, with the age range of neonate to 92 years old (with the most, older than 18 years old (80.3%)). In the first group, there were 329 (67.7%) patients not-transported to the hospital. In the second group, there were 157 (32.3%) transported to the hospital. All these patients called EMS for seizure and asked for an ambulance. The initial diagnosis of true seizure was made by EMTs as soon as they arrived at their site and by consulting the physician at dispatch. 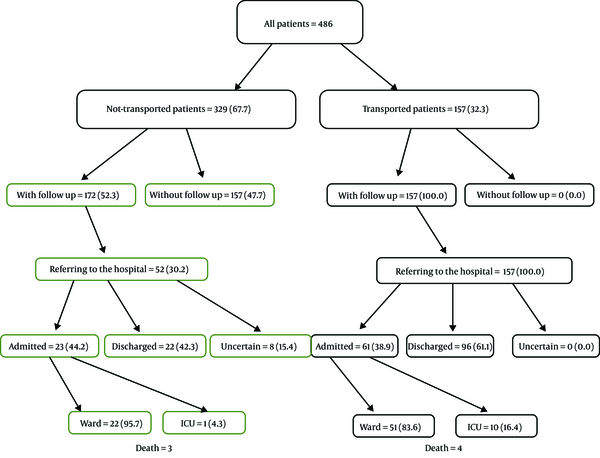 Figure 1. Flowchart of the study population

Table 1. Frequency Distribution and Association of Seizure Diagnosis by EMS Technician with Underlying Disease in Both Groups

Patients’ vital signs were recorded and compared between the 2 groups. Patients in the transported group had significantly lower Glasgow Coma Scale (GCS) and saturation of oxygen (SPO2). Data are shown in Table 2.

Table 2. Comparison of Vital Signs Between the 2 Groups

Among all cases not transported to the hospital, we could follow 172 patients and ask about the reasons. We found that the most common reasons were 1) for calling EMS was consultation and evaluation (62 cases (36.0%) and 2) feeling better in 23 cases (13.4%).

Table 3. Frequency and Comparison of Outcome Between the 2 Groups (Cases with Follow Up)

In this study, we found that the short-term (72 hours) mortality rate was not significantly difference between the two groups. In the not-transported group, only 52 cases (30.2%) of our 172 followed patients, had ultimately gone to the hospital. Moreover, data shows that even many of these (22 out of 52 cases) were finally discharged from ED. Most patients in the transported group were finally discharged from the ED (61.2%); this number was significantly more than the ED discharge rate in the followed not-transported group (P < 0.001). More patients in the transported group were admitted to the hospital ward and also ICU in comparison to the other group. The mean ± SD of hospital length of stay was the same between the 2 groups both at the hospital ward and ICU.

The suspected seizure is one of the most common reasons for calling EMS. Patient management in this condition, is one of the most critical principles in health care quality. Dickson et al. in 2015, in a cross-sectional study, revealed that the suspected seizure was 3.3% of EMS calls in the studied time interval. 75% of EMS presence at scene patients was transported to the hospital. This led to a great disease burden and high cost. They concluded that by controlling many of these patients at the scene, we could decrease and economize health care system expenses (11).

In another study, it was found that EMS paramedics diagnosed 2.7% of all suspected calls as true seizures at the scene. Finally, 59.3% (2894 out of 4884) of patients were transported to the hospital. They reported only 1 death (0.02%), 9.8% were treated at the scene and not transported, and 11.4% refused the transport. The administration of diazepam, insertion of an airway, pyrexia and modestly tachycardia were associated with transporting to the hospital. Recurrent incidents were common in this study (10.1%) (8).

Noble et al., in 2016, asked 19 highly qualified EMTs in 5 England dispatch centers about seizure management at the scene, recommending some organization rules, structural, environmental and educational reasons limited EMTs to not-transport patients with suspected seizure to the hospitals. The local or federal laws should be improved to encourage the EMS personnel to correctly decide not to transport these cases to EDs (12).

Tohira et al. in 2016, designed a self-care pathway assessment checklist for hypoglycemia and postictal patients. They decided to check if this checklist was validated as a reliable clinical decision tool for paramedics to identify the patients who should be discharged at the scene. Reportedly, it was not accurate and patients fulfilling the postictal checklist demanded subsequent health care service. It was concluded that reliance on these checklists could lead to more transportation to EDs (13).

Mechem et al. in 2001 studied the short-term outcome of seizure patients who refused the transport after out of hospital evaluation. It was a prospective study with a known seizure disorder. It was determined that most of their patients (94.2%) had no further seizure activity in the subsequent 3 days (15).

According to the results of the current study, most of the transferred patients were early discharged from the ED. Considering the 72-hours outcome of not-transmitted ones, it is recommended to prepare clear protocol to guide EMS technicians at the scene, so avoiding unnecessary transfer that may consequently reduce ED crowding.

Since the present study was retrospective, the data registry was incomplete in some cases and patient follow-up was difficult. Some patients were reluctant to answer the questions correctly. We performed this study in a small-sized strict region of Tehran. This might not present the correct result of larger sample sizes.

Although most of not-transported patients did not go to the hospital during further 72 hours, half of whom referred were hospitalized. Most of patients who were transported to the hospital were finally discharged from ED. Short-term mortality rate showed no significant difference between the 2 groups.

We would like to express our obligations to the Prehospital and Hospital Emergency Research Center affiliated to Tehran University of Medical Sciences.