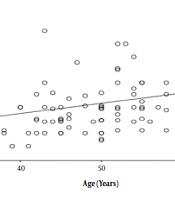 To estimate the prevalence of asymptomatic extra and intracranial vessels stenosis.

100 Patients with Type-2 Diabetes (T2D) were recruited consecutively from diabetes clinic of the department of internal medicine at Assiut University Hospitals in the period from 1st January 2016 to 31st January 2017. A detailed history was obtained for all participant. As well, thorough-out physical and neurologic examination were carried out for patients. All patients underwent extra cranial and transcranial colour coded ultrasound by two independent investigators. Patients with history of cerebrovascular stroke and transient ischemic attacks were excluded.

All around the world, Cerebrovascular Ischemic Stroke (CIS) is a major health problem that increases morbidity and mortality and leads to severe economic consequences (1). To reduce its burden, identification of the most common Modifiable Risk Factors (MRFs) to control and follow up CIS patients is necessary. The CIS’s MRFs include hypertension, diabetes, smoking and dyslipidaemia (2). Long-term high blood glucose in patients with Type 2 Diabetes (T2D) can damage the blood vessel endothelium, that in turn increases the level of oxidative stress which further impairs the endothelia. In response to the endothelium damage, the atherosclerotic process begin in cerebral blood vessels which results in increased likelihood of CIS (3, 4). Diabetic patients are at increased risk of CIS, about 2.5 - 3.5 times higher than non-diabetics (5, 6). Moreover, the risk of stroke recurrence is higher among diabetics (7). Because of its impressive role in early identification of high-risk patients and therefore reducing morbidity and mortality of cerebrovascular diseases, regular follow up of diabetic patients is highly recommended.

For decades research has been focused on using imaging tools to assess cerebral blood vessels in diabetics. Imaging tools such as Computed Tomography Angiography (CTA) and Magnetic Resonance Angiography (MRA) are standard methods to evaluate the cerebrovascular circulation, mainly because of high accuracy. It’s a while that importance of Ultrasound [Carotid Ultrasound and Trans-cranial duplex (TCD)] in diagnosis and examination of CIS is increasing (8). By using the Carotid Ultrasonography, it is possible to precisely monitor the tunica intima, location and size of plaques. As well, it can accurately measure the extent of carotid artery stenosis (9). TCD investigates the condition of intracranial vasculature via examination of blood flow velocity at certain vessel segment and shows changes of flow velocity at this segment ,local turbulence, pre-stenotic and/or post-stenotic alterations and numerous collateral flow patterns (10, 11). However, it can’t investigate structural morphology of intracranial vessels.

The current study aims to investigate the impact of T2D on extra and intra-cranial vessels among asymptomatic Egyptian patients.

The current case-control study followed-up 100 patients with T2D without other risk factor from 1st January 2016 to 31st January 2017. Participants were recruited from diabetes outpatient’s clinic at Assuit University Hospitals, Assuit, Egypt. 50 healthy participants with similar age and sex characteristics that does not have a history of CIS, diabetes, or hypertension, dyslipidaemia and smoking were recruited to match controls. The following inclusion criteria were used: age > 18 years, patients with isolated T2D. Diabetes Mellitus (DM) diagnosis criteria was defined as fasting plasma glucose of ≥ 126 mg/dL, and/or 2-hr plasma glucose in the 75 g oral glucose tolerance test ≥ 200 mg/dL, random plasma glucose ≥ 200 mg/dL and HbA1c ≥ 6.5% (a criterion which is recommended by the World Health Organization) (12).

Exclusion criteria were as follow: having history of CIS or Transient Ischemic Attacks (TIA), coexistence of other risk factors such as (hypertension, dyslipidaemia, cardiac diseases and smoking), and poor trans-cranial bone window. The study protocol was approved by the Ethical Committee of Assuit University according to principles of Helsinki Declaration. A written approval consent was taken from all participants.

All member of case and control groups underwent a complete extracranial and intracranial ultrasound assessment by two experienced neurovascular sonographers. The ultrasound examination was done at the Neurovascular Ultrasound Laboratory in the Neurology department, Assiut University hospitals using a colour-coded duplex ultrasound device Philips HD5 (Philips Medical Systems, Nederland B.V.). Assessment was done for the carotid and vertebral arteries and for the intracranial arteries.

The intracranial arteries were evaluated in all patients by using Transcranial Color-Coded Duplex Sonography (TCCS) with the use of a low-frequency (2- to 5-MHz) phased-array probe through the transtemporal acoustic bone window. Middle Cerebral Artery (MCA), intracranial segment of vertebral artery (V4) and Basilar Artery (BA) were examined. To diagnose Intracranial Atherosclerotic Disease (ICAD), Peak Systolic Velocity (PSV) and flow direction (antegrade or reversed) were used.

The findings and the atherosclerotic changes in the extracranial and intracranial vessels are interpreted according to the internationally published data (13, 14).

Data are analysed by using SPSS software version 20.0. Before conducting analyses, the data normality was checked by using the Anderson-Darling test. Variance homogeneity was also checked. Categorical variables are described in absolute numbers and percentages (N, %). As well, continuous variables are described by mean and Standard Deviation (SD) (i.e. mean ± SD). Chi-square test and fisher exact test were used to compare categorical variables. To compare continuous variables t-test and independent-samples t test ANOVA were employed, followed by post hoc test. A two-tailed P value < 0.05 was considered as statistically signiﬁcant (if P > 0.05, difference was non-significant). And if P < 0.001, difference was highly significant. Pearson and Spearman correlation were used to investigate associations between variables.

In total data of 150 participants were analysed. 100 patients had T2D without any other risk factors (mean age 48.9 ± 8.4 years). 50 healthy participants were considered as control group (mean age 49.2 ± 8.0 years). Nearly 56% of T2D patients were females and 44% were males. In control group, about 58% of participants were females, and 42% were males. About 86% of patients had uncontrolled DM and 14% had controlled T2D (based on the results of serum glycosylated haemoglobin level). Mean duration of illness was 7.49 ± 4.74 years. Both groups were similar in terms of demographic characteristics and there were no statistically significant differences between groups. 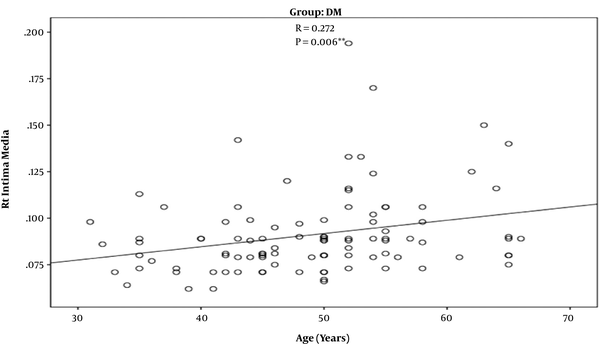 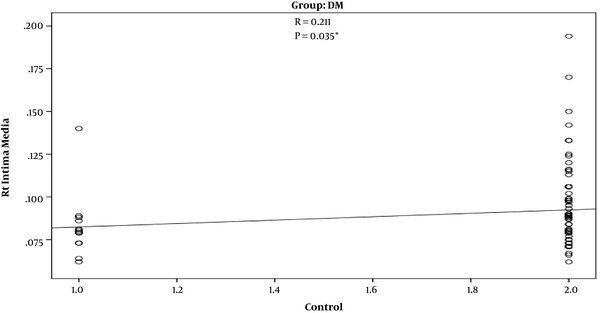 According to the findings, prevalence of MCA stenosis is zero. However, the pulsatility index of the MCA was higher among old diabetics in comparison to younger ones and control group (r = -0.225) (P = -0.025) (Figure 3). Also, the higher the duration of diabetes diagnosis, the higher the PSV of MCA was (r = 0.244) (P = 0.014) (Figure 4). The V4 segment of vertebral artery and BA showed no hemodynamic changes, neither among diabetic group nor control group. 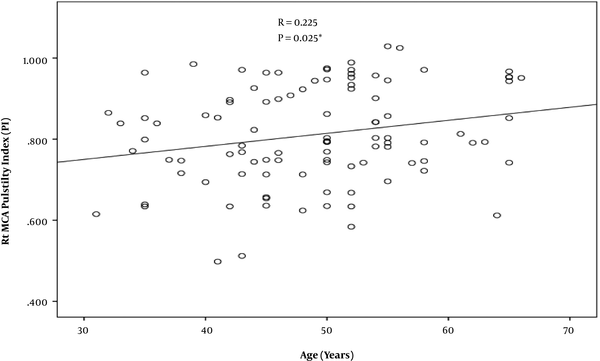 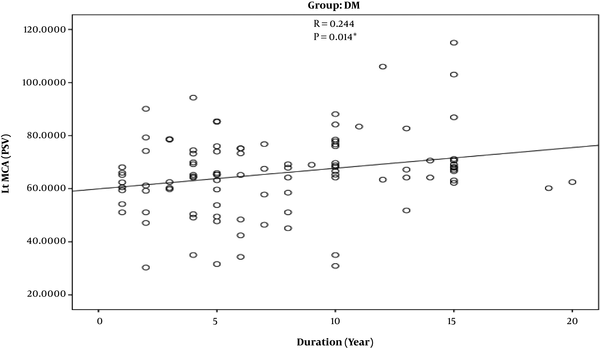 The results are consistent with earlier findings that diabetic patients are subject to increased CCA IMT relative to nondiabetic subjects (e.g. as shown in studies conducted by ARIC (15) and Hoorn (16) which showed that DM accelerates the atherosclerotic changes of arterial vessels). According to the findings, aging and uncontrolled DM have a positive association with severity of atherosclerotic changes. This finding is consistent with those reported by Malmo (17) which reported that IMT in older diabetic patients is higher than younger ones and non-diabetics. A systematic review conducted by Brohall showed that Carotid IMT is higher among diabetic patients in comparison to control subjects. These findings were similar among Caucasians and other ethnicities (18). In the current study, IMT frequency increased (36%) and was higher in comparison to other studies such as Inchiostro et al,. (19) who studied the carotid artery atherosclerosis among diabetic patients and reported a prevalence of thickened IMT of 6.4 %. This difference can be attributed to the fact that most of our patients (83% of our patients) had uncontrolled DM.

In contrast with results of the current study, another study that investigated the carotid atherosclerosis and glucose intolerance among elder males in the eastern parts of Finnish reported that (20) IMT of diabetic men was not higher than control group. The authors argued that this difference can be attributed to the mean age of participants, as the patients and controls were all older men (70 - 90 y). The ethnic differences between people in Egypt and Finnish could play a similar role. In the current study carotid stenosis prevalence was low in carotid vessels (6% had stenosis of 50% - 69% in the ICA and 2 patients had stenosis of ≥ 70% in ICA) in comparison to stenosis in the VA (26% had stenosis < 50%).

Most of the literature focused on investigating the effects of DM on carotid vessels, and few studies investigated its effect on the Post. circulation. One of these few studies is the one conducted by Wei et al., who studied atherosclerotic changes among diabetic patients and found that DM affects mainly proximal part of VA and ICA, which in concordance with results of the current study (24).

Results on DM role in intracranial cerebral blood vessels atherosclerosis are controversial (25-28). The results show that there is no intracranial atherosclerosis among asymptomatic diabetic patients, although hemodynamic changes were observed at early stages. One study reported that DM is an important predictor of asymptomatic ICAS and also might be a more powerful predictor than hypertension (29). Another study that is performed among diabetic patients in China found that 12.3% of participants have MCA stenosis (30). Most of studies reported the presence of intracranial atherosclerotic changes among diabetic patients came from Asia. According to our best knowledge, there are very limited studies in Egypt to compare with. One of few studies is conducted by Abd-Allah (31) that studied the prevalence of intracranial atherosclerosis among patients with coronary artery disease. The author found a low prevalence rate (6.8%) of ICAD among Egyptian patients, although there are demographic differences between two populations of his study and that of us, but the results of both are consistent.

DM is an important risk factor for atherosclerosis, even among asymptomatic patients. Among Egyptian patients’ atherosclerotic changes affect extracranial vessels more than intracranial vessels. To avoid CIS, greater emphasis should be directed toward regular screening programs for risky populations.