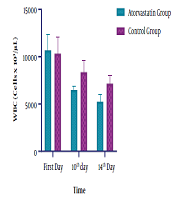 The Effect of Low-Dose Atorvastatin on Inflammatory Factors in Patients with Traumatic Brain Injury: A Randomized Clinical Trial

Traumatic brain injury (TBI) is the leading cause of morbidity and mortality. Each year near 1.5 million Americans experience a TBI. Of which about 235,000 are hospitalized. Also, TBI claims 50 000 American lives each year. TBI causes mechanical damage to the blood-brain barrier and white blood cells (WBCs) entry to the brain.

The current study aimed to evaluate the efficacy of low-dose Atorvastatin on inflammatory factors in patients with traumatic brain injury (TBI).

This double-blind, randomized clinical trial study was conducted in the ICU ward of Golestan Hospital in the city of Ahvaz (Iran) from April 2019-May 2020. Sixty patients with moderate to severe TBI were studied. Patients were randomly assigned into two groups of Atorvastatin and control. The main outcomes included the amount of CRP and ESR as well as white blood cells in the first 14 days of hospitalization. Glasgow Coma Score, the length of ICU stay, and the duration of mechanical ventilation were secondary outcomes.

Traumatic brain injury (TBI) is the leading cause of morbidity and mortality. Each year near 1.5 million Americans experience a TBI. Of which about 235,000 are hospitalized. Also, TBI claims 50 000 American lives each year (1). TBI causes mechanical damage to the blood-brain barrier and white blood cells (WBCs) entry to the brain (2). WBCs (neutrophils and activated macrophages) can release reactive oxygen molecules that eventually lead to cell destruction; They also stimulate the release of cytokines such as TNF alpha and Interleukins (IL-1, IL-6, IL-10, and IL12) (3). The inflammatory condition has an important role in the prognosis of patients with severe TBI. Inflammation leads to several reactions and interactions between different cell types and chemical mediators. During the acute phase reaction, the synthesis of C-reactive protein (CRP) increases so that its concentration increases significantly by 1000 times within 4-6 hours after tissue damage or acute inflammation (4, 5). ESR is the main indicator of acute-phase protein plasma reaction, which leads to a viscosity blend index and inflammation. Statins have anti-inflammatory effects and can reduce plasma CRP concentration (6, 7).

Statins also have anti-inflammatory and immunogenic properties (5, 6, 8, 9). Atherovstatin modulates the immune system by affecting the endothelial cells, macrophages, Natural killer cells, and neutrophils (10). Statins are widely using to treat TBI due to their anti-inflammatory effects (11). Several studies have reported the effects of statins on the TBI pattern and its related processes, including cerebral ischemia, intracranial hemorrhage, and Sub Arachnoid Hemorrhage (12). However, there are studies that reported controversial results (13).

The ratio of risk and benefit of statin treatment in the TBI ICU patients is not yet known. Moreover, the findings of studies on the effectiveness of statins for TBI patients are controversial. Hence, the current study aimed to investigate the effect of low-dose oral Atorvastatin on inflammatory factors in TBI patients.

This double-blind, randomized clinical trial study was conducted on TBI patients in the ICU ward of Golestan Hospital in the city of Ahvaz (Iran) from April 2019-May 2020. The study is approved by the Ethics Committee of Jundishapur University of Medical Sciences (code: IR.AJUMS.REC.1398.589). It's also registered by code: IRCT20191016045127N1. Written informed consent was obtained from the patient's legal representative.

The sample size was calculated using the relevant formula by considering a 95% confidence interval (CI). The study population consisted of 60 patients, based on the previous data (14).

Random allocation was performed using a computer-generated eight-patient block randomization procedure. After eligibility assessment at ICU admission, each patient received a sealed brown envelope containing the random Atorvastatin or control treatment (the envelopes were opened on the evening of the first ICU day).

Blinding: two physicians, according to the requirements of the Ethics Committee, were aware of patients allocations and were continuously monitoring patients' health status, without participating in clinical decisions about sedative administration or interrupting the treatment.

In this study, patients in the intervention group received atorvastatin 40 mg tablet (Sobhan Darou, Iran) daily until hospitalization in ICU, and those in the control group received placebo (Placebo capsules filled by cornstarch powder (Beijing, China (by NG tube. The intervention began within 10 h of injury for all of the patients.

Primary Outcomes: CRP, ESR, and WBC serum levels changes (as inflammatory factors) in the first 14 days of hospitalization were the primary outcomes.

Secondary Outcomes: Glasgow Coma Score (GCS), the duration of mechanical ventilation, the length of ICU stay, and mortality rate in the ICU were examined. Data regarding these variables were collected using a questionnaire by a researcher who was blind to the study. The liver function was checked every day of ICU stay.

During the study period (April 2019-May 2020) 80 eligible patients were admitted to the ICU ward of the Golestan Hospital. After initial screening, 70 cases agreed to participate, and their legal representatives signed the informed consent. After further investigation, 10 patients were excluded due to not having inclusion criteria. Finally, 60 patients were enrolled in the study. Participants were divided into two groups of Atorvastatin and placebo (each with 30 subjects) (Figure 1). There was no statistically significant difference between the two groups concerning the demographic characteristics (Table 1). 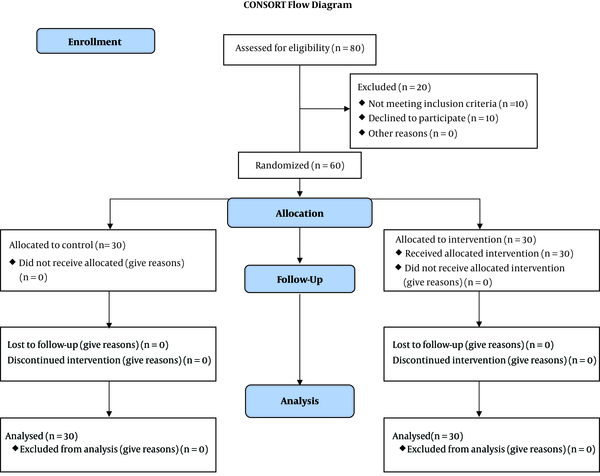 Table 1. Demographic Characteristics of Participants Separated by the Group

Table 2. Comparison of Inflammatory Factors (CRP and ESR) Between the Two Groups 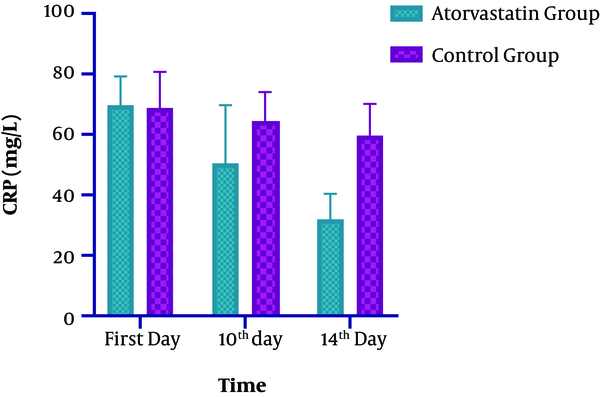 The changes of CRP after administration of Atorvastatin or Placebo 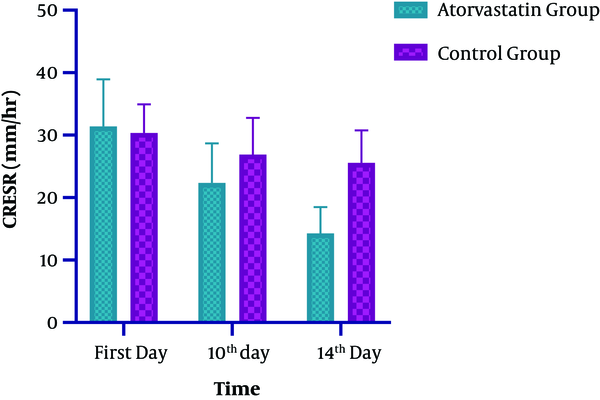 The changes of ESR after administration of Atorvastatin or Placebo 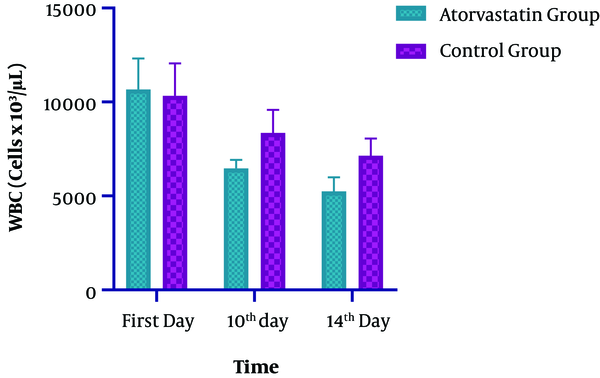 The changes of WBC after administration of Atorvastatin or Placebo 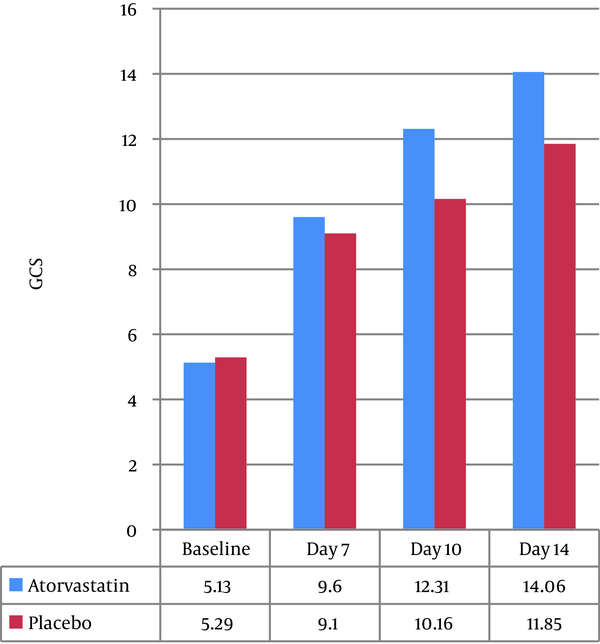 The changes of GCS after administration of Atorvastatin or Placebo

There are trials on the effectiveness of Atorvastatin in TBI patients that completed phase II. Statin can prevent cholesterol biosynthesis and facilitates functional recovery following TBI in rodents. Simvastatin inhibits caspase-3 activation and apoptotic cell death, thereby improves neuronal rescue after TBI. Simvastatin improves the appearance of several growth factors and stimulates neurogenesis. Besides, it can support functional improvement after TBI (16).

Naqib et al. reported a significant decrease in CRP level 48 hours after administration of Simvastatin in TBI patients; however, they didn't report a significant difference concerning the Interleukin 6 levels (19). Zhang et al. reported a significant reduction in CRP during the six-month administration of oral atorvastatin 20 mg in patients with stroke (20). Aguilar et al. didn't report a statistically significant anti-inflammatory effect for statin in TBI patients, which is not in line with the findings of the present study. This discrepancy can be attributed to the short period of their study (three days) (13). In most cases, CRP and ESR are co-administered in hospitalized patients suspected of inflammatory or infectious disorders. ESR is higher in females than males. Besides, its concentration also increases with age, an issue which is neglected by most laboratory references. It's not clear whether there is a gender difference concerning the CRP or whether its concentration changes with age. However, in this study, age and gender factors were not taken into account while investigating the effects of Atorvastatin on inflammatory factors.

Inflammation of brain tissue after TBI may result in severe consequences such as changes in protein function, increased cell membrane permeability, leukocyte infiltration, and cerebral tissue edema (21). Therefore, treating these side effects is necessary. Some studies on patients with other problems have also examined the anti-inflammatory effects of statins; for example, in an eight-week study on patients with congestive heart failure who were receiving these drugs every day, inflammatory factors (e.g. CRP) were reduced by 37% (22). In patients with ischemic stroke, rheumatoid arthritis, acute coronary syndrome, hyperlipidemia, etc., these anti-inflammatory effects have brought positive results (23, 24). Investigating the effects of statins on the inflammatory status of gonadotropins showed that inflammatory problems present with symptoms such as trauma, sepsis, heart problems, etc., and change the permeability of the blood-brain barrier and activate the microglia or over-stimulation of inflammatory responses in the brain. Therefore, consuming medicines such as atorvastatin may alter the pathophysiological responses of the central nervous system to inflammation in TBI patients (25).

Another important finding of the present study was the significant decline of WBCs on the 14th day of ICU admission in the intervention group. Xu et al., in an animal study, have investigated changes in different types of WBCs, such as T-cells and NK cells, in the post-traumatic brain injury period and reported a significant increase in the number of T-cells and NK cells three days after consuming atorvastatin. There are studies that reported the destructive effect of increasing T-cells on neurotransmitters, which in turn may cause increased inflammation in brain tissue and neuronal damage (26). They argued that the destructive effects of NK Cells could be attributed to their toxic effects on brain cells. The destructive effects of NK Cells can cause inflammation and neuronal damage in the acute phase of brain damage through IFN-γ (27, 28).

In this study, the GCS of patients was assessed several times, from the onset of the study to the 14th day. Those in the intervention group had a significantly higher level of consciousness than the control group. This finding may be due to the protective effects of atorvastatin on the brain, which can prevent the release of inflammatory factors as well as neutrophil infiltration in the brain parenchyma to some extent with its anti-inflammatory effects on cerebral edema (29). Similar findings are reported by Rongcai Jiang and colleagues that investigated the effects of Atorvastatin on patients with chronic subdural hematoma in their clinical trial. They concluded that Atorvastatin could effectively increase the GCS (18). Naqibi also reported a significant increase in the consciousness level of patients in the intervention group compared to the control group after a week from ICU discharge (19).

In a clinical trial similar to ours on TBI patients, the authors reported that using statin could improve anti-inflammatory effects and patient recovery and reduced the disability scores (13). Morandi also examined critically ill patients with brain damage and reported that systematic inflammation could cause neuronal apoptosis, damage to the blood-brain barrier, and cerebral ischemia. They reported that statins could reduce such consequences and the occurrence of cognitive complications (25). In studies conducted on animals with traumatic induced brain injury, seven days of oral administration of atorvastatin was associated with effective preservation of brain neurons because of increasing the number of vessels in those areas after a traumatic brain injury (15).

In the present study, the length of ICU stay and the mortality rate were similar between the two groups, but the duration of mechanical ventilation was significantly lower in the atorvastatin group. The shorter duration of mechanical ventilation in the intervention group can be attributed to the anti-inflammatory effects of atorvastatin, which could reduce inflammatory factors such as CRP and ESR, as well as the number of WBCs during the study period. Besides, it was associated with reduced inflammation in the body and, in particular, in the brain and could improve the function of the alveoli and the patient's breathing by reducing the infiltration of neutrophils in the lungs, which in total decline the period of mechanical ventilation.

The current study had limitations, including its small sample size, being a single-center, and not considering other inflammatory markers. Also, failure to evaluate the patients’ 3-month GOS is another important limitation of the present study. The authors suggest performing a multi-center study with a larger sample size, which contains patients' GOS and other inflammatory factors.

In conclusion, this study demonstrated that administration of Atorvastatin for TBI patients could reduce inflammatory factors over fourteen days, and despite not decreasing the ICU length of stay, it could improve GCS after ICU discharge and reduced the time spent on mechanical ventilation.

This paper was a part of a thesis with the Ethics code IR.AJUMS.REC.1398.589This study was designed as a placebo-controlled double-blind clinical trial (IRCT20191016045127N1). We sincerely thank the patients who cooperated with us in this project and supported the research team.