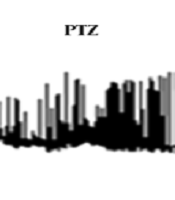 Epilepsy is a chronic central nervous system disorder with a high prevalence in modern society. Despite using common anticonvulsant drugs, its control is not adequately achieved. Animal models for seizures play the leading role in advancing our understanding of the cellular mechanisms of epilepsy. The present study was an attempt to elucidate the electrophysiological mechanism of the effect of sodium valproate on the cellular model of epilepsy. Understanding the cellular mechanisms of this drug may help clarify the pharmacological screening of other drugs.

The intracellular recording was made from F1 cells of garden Helix aspersa in the presence of Ringer solution. Following the extracellular application of valproate sodium at a concentration of 10 mM after and before the use of (25mM) epileptogenic agent (pentylenetetrazol (PTZ)), we evaluated its effect on paroxysmal depolarization shift (PDS) and electrophysiological characteristics.

The results suggested that valproate sodium could reduce the PTZ-induced hyperexcitation by hyperpolarization of resting membrane potential (RMP), a reduction in AHP amplitude, and firing the frequency.

Epilepsy is a chronic central nervous system disorder with a high prevalence in modern society (1). Despite the use of common anticonvulsant drugs, its control is not adequately achieved, and around 30% of patients are non-responders to the existing therapies (2, 3). Animal models for seizures play the main role in advancing our understanding of the cellular mechanisms of epilepsy (4).

Studies have shown that intracellular recordings in animal models provide an unparalleled view into the functional role of individual neurons, intracellular approaches, action potentials, and ion channels (5-7). Valproate sodium has remarkable advantages among anticonvulsant drugs and is a standard antiepileptic agent. Understanding its cellular mechanisms can be helpful in the study of cellular records of medicinal plants with anticonvulsant activities. Therefore, the present study was an attempt to elucidate the electrophysiological mechanism of the effect of sodium valproate on the cellular model of epilepsy, using the intracellular recording method. Because the effect of sodium valproate on the cellular level has not yet been investigated, understanding the cellular mechanisms of this drug may help elucidate the pharmacological screening of other drugs.

Intracellular recording technique under current-clamp conditions was performed on the F1 neuron of Helix aspersa (Persian garden snail). In this study, after acquiring permission from the ethics committee (ZUMS.REC.1393.99), experiments were done on the F1 neuronal soma membrane of the suboesophageal ganglia of snail Helix aspersa (Iranian garden snail). Before the testing, for creating the same physiologic condition for samples and assurance of animal activity, we took them in a water chamber, and after the removal of the oysters (8), the test was done. Thus, the oyster was removed by a bone breaker, and the animal was fixed to the broad by a needle. The connective tissue surrounding neurons was removed by delicate tissues forceps without proteolytic enzymes, and then the ganglionic mass was dissected out and pinned on the Sylgard 184 grounded recording chamber with a normal ringer. Snail normal ringer solution contained: 80 mM NaCl, 10 Mm, CaCl2 mM, 5 mM MgCl2, 4 mM KCl, 10 mM Glucose, 5 mM HEPES(4-(2-hydroxyethyl)-1- piperazineethanesulfonic acid). The pH of solutions was regulated by pHmeter and Trizma base in the range of 7.7 (9). After fixation, F1 neurons were visually identified by location, size, color of the cell, and their position relative to other cells to detect the desired cell, and then recording was done. Rest action potential was recorded by microelectrodes (5). Microelectrodes were produced of thin procilicat containing internal filaments (Clark Electromedical Instruments, UK).

Thin tubes were pulled by Puller equipment. Then, microelectrodes were filled with 3 M chloride potassium. Silver wire with partial coverage with Ag/AgCl was put in glass microelectrode. The resistance of microelectrode in its tip was 3 to 5 ohm. This assembly was directly connected to amplifier (AxoclampInc2B, USA). Agar Bridge was used as reference electrode in all experiments, which connected solution of record chamber to potential zero (ground). After the entrance of the electrode into the neuron, basic recording was performed (with recording of cell spontaneous activity) for 5 minutes. Recorded data were reserved by 16-bite analogue – digital converter and digital – analogue (AD Instrument, Australia) for further analysis. The evoked and spontaneous activity of the cell was recorded by current clamp technique (10). The electrophysiological parameters were measured, such as resting membrane potential (RMP), action potential amplitude, spontaneous electrical activity frequency, and following hyperpolarization. Then, drugs were injected into the extracellular space and evoked, and spontaneous activity was recorded.

Data were analyzed by Chart software, and the t-test and one-way ANOVA were used to compare data. A P < 0.05 was considered statistically significant.

The F1 neuron of Helix aspersa shows spontaneous rhythmic activity under control conditions (Figure 1). Following the use of pentylenetetrazol (PTZ; 25 mm), the characteristic of epileptiform and burst activity was established (Figure 2). Then, to evaluate VPA's therapeutic effect against epileptic activity induced by PTZ, VPA (10 mM) was added to Ringer's solution containing PTZ. Next, changes in action potential characteristics were examined under different experimental conditions.

Spontaneous activity of one neuron at control condition.

Induction of epileptic electrical activity by pentylenetetrazol (PTZ) in snail neurons and valproate effect on its inhibition.

3.1. Effects of PTZ on Electrophysiology Properties of F1 Cells

Acute exposure to PTZ leads to significant depolarization of the RMP and a significant increase in firing frequency. It also significantly reduced the AHP amplitude (Table 1 and Figure 2).

Table 1. Effect of Valproate Sodium After the Administration of Pentylenetetrazol (PTZ) a, b

3.2. Evaluation of the Therapeutic Effects of Valproate Sodium on Electrophysiological Changes Induced by PTZ

After adding VPA at a concentration of 10 mM, the characteristics of recording are presented in Figure 2 and Table 2. The reduction in AHP amplitude was significant in the presence of either PTZ or valproate sodium. Action potential did not change remarkably. The frequency of action potential reduced slightly than the control group (Table 1 and Figure 2).

Table 2. The Effect of Valproate Sodium Before Epileptic Activity Pentylenetetrazol (PTZ) a, b

3.3. The Prophylactic Effects of the Valproate Sodium on PTZ-Induced Changes in F1 Neurons

The preventive effect of VPA on the electrical properties of the F1 neuron was investigated. Application of VPA alone to the bathing solution led to significant hyperpolarization of RMP and a reduction in AHP amplitude and the firing frequency, but the application of PTZ following VPA exposure led to a significant increase in the firing frequency and a significant decrease in the AHP amplitude compared to the control group (Table 2 and Figure 3).

The preventive effect of valproate sodium on epileptic electrical activity.

Epilepsy affects around 70 million people worldwide and is one of the most common neurological disorders impair nerve function (11, 12). Despite using common anticonvulsant drugs, there is no available treatment for epilepsy (13). Understanding the cellular mechanisms of epilepsy and standard antiepileptic agents can help discover other medicines. Therefore, in the present study, we aimed to investigate the cellular effects of VPA on the excitability of neurons in an epileptic model. As a clinically helpful antiepileptic drug, VPA has a broad spectrum of antiepileptic activity (14). Despite considerable clinical and experimental efforts, few studies have been conducted on its cellular mechanism of action. The present study's findings indicated that the use of VPA following PTZ exposure reduced neuronal excitability, which was associated with lower membrane depolarization, reduced firing frequency, and higher AHP amplitude (Table 1 and Figure 2). Redecker et al. tested several structural analogues of VPA for the determination of the antiepileptic mechanism of valproate (15). In addition to VPA ethyl ester, VPA mannitol esters could suppress paroxysmal depolarization shift (PDS) in snail B3 neurons in the pentylenetetrazole-induced epilepsy model (15). Astrup et al. and Speckmann et al. demonstrated that the antiepileptic effect of VPA is intracellular, and these effects of VPA were related to the activation of voltage-dependent potassium currents (16, 17). Papp et al. reported that sodium valproate reduced depolarization by PTZ. It also increased the range of action potential after PTZ administration (18). To investigate the possible protective effect of VPA against the induction of epileptic activity by PTZ, in this study, VPA was added into extracellular space before adding PTZ. It was observed that VPN had no antiepileptic action before using PTZ (Table 2 and Figure 3). There was no study in this field.

Our findings showed that VPA reduced the PTZ-induced hyperexcitation by hyperpolarizing RMP and reducing AHP amplitude and the firing frequency.

4.2. Limitation of the Study

Intracellular recording is a demanding technique, and only a small number of neurons can be recorded.