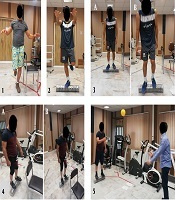 Proprioceptive deficits are one of the most important challenges after anterior cruciate ligament reconstruction (ACLR).

The anterior cruciate ligament (ACL) in the knee is a key element for the static and dynamic stabilities of the joint, and so, it is quite vulnerable in sports activities with an annual incidence of approximately 69 per 100,000 person-years (1). The ACL sends information mainly about the middle-range of knee movement through its receptors to the central nervous system (2). Anterior cruciate ligament reconstruction (ACLR) is a common procedure for improving the mechanical stability of the knee joint and regaining the pre-injury level of function and dynamic neuromuscular control (3, 4).

The disturbances of information received by the central nervous system (CNS) are expected due to the altered joint mechanoreceptors and nervous central connections after ACL injury and ACLR. These, in turn, lead to clinical proprioceptive deficits with functional instability in most patients (5, 6). Accordingly, the recovery of proprioceptive functions after ACLR is critically important for restoring the strength, ROM, and integrity of the graft (7). Consequently, research has been focused on the essential role of proprioception and the role of exercise training on the improvement of functional stability of the knee joint after ACLR (8).

The most accepted definition of the joint position sense (JPS) is the awareness of the actual position of the limb in a static position. In other words, it represents the static sense of movement (9, 10). Patients with ACLR demonstrate decreased proprioception represented by JPS, which reduces their functional ability (11). The most appropriate proprioceptive training after ACLR could be achieved by utilizing unstable boards and visual feedback combined with closed kinetic chain exercises to promote information received by the CNS (6).

This is a prospective randomized controlled study with a conventional rehabilitation group. All subjects were asked to sign an informed consent form approved by the Ethics Committee of Tehran University of Medical Sciences (ethical approval ID: IR.TUMS.VCR.REC.1398.571).

Thirty male volunteers from the physical therapy clinics of the Rehabilitation Faculty and Sports Medicine Federation participated in this study. All subjects were amateur athletes. They had undergone reconstruction surgery in a similar technique (hamstring tendon graft). The inclusion criteria included athletes aged between 18 and 35 years, undergoing a unilateral ACLR, no history or signs of injury in the contralateral knee, less than one month from injury to the surgery date, elapsing nine weeks after ACLR, full knee ROM of flexion, and complete extension (zero degrees). Athletes with ACLR were excluded if they had swelling that restricted doing exercises, history of previous major injuries in the lower extremities, any known neurological, rheumatic, or orthopedic diseases, high level of pain when doing tests, and any complication that prevented data collection.

Subjects were randomly assigned to two rehabilitation groups. Fifteen slips of paper were marked with PT letters and 15 with CT letters. Each slip of paper was randomly allocated into 30 sealed envelopes by the project manager, and the envelopes were numbered 1 to 30. Then, the numbered sealed envelopes were sent to the assessor who did the testing and evaluation sessions for the subjects. After sampling the subjects in the study, they were numbered 1 to 30 in the order they visited the clinic to complete the baseline testing session. The laboratory director, who was not an investigator of the study, opened the corresponding sealed envelope to disclose the group allocation of subjects. The first group was the conventional therapy (CT) group (n = 15, age 24.33 ± 3.68, weight 79.57 ± 4.96) that did the conventional therapy according to the accelerated rehabilitation protocol (17). The second group was the proprioceptive training (PT) group (n = 15, age 23.14 ± 3.03, weight 81.57 ±3.89) that did an innovative land-based proprioceptive training with the conventional accelerated rehabilitation protocol. Both groups were matched for the demographic characteristic (Table 1).

Proprioception was assessed by active joint position sense to test the ability to reproduce the same joint position during knee extension and flexion using Biodex Medical systems (System 3 ProTM, New York, USA) for the affected leg (18, 19). In doing so, the subject was blindfolded and placed on a System chair, with head and back supported and the hip joints in an 80° flexed position. The upper limbs were placed along the trunk with the elbows bent and hands positioned on the thighs. The legs were relaxed in a 90° resting position. The goniometer axis of rotation was placed at the lateral femoral condyle to match the flexion/extension axis of rotation of the knee joint. Belts were used to stabilize the subject in place in the chest, hip, and thigh. Before doing the test, the dynamometer was calibrated by asking the subject to place the knee at 0° of flexion. The subject was then asked to place the knee in the starting point at 90° of knee flexion. Then, the subject was instructed to move the limb leisurely to 45° (18) (target angle) of extension. Afterward, the subject was asked to hold the limb at the target angle for 10 seconds to let him remember the position. The subject was then instructed to return the leg to the starting point (90°). After a 15-second pause, the cycle was performed again. Once the subject believed that the position (estimated angle) had been achieved, he pressed a stop button and was not allowed to correct the angle again. The estimated angle was identified from the onscreen goniometer. Five trials were done for each subject, and the average of these trials was used to calculate errors (20). The absolute mean error, constant mean error, and variable mean error were calculated as variables of JPS using the following formulas (21):

The pain intensity of the reconstructed knee was assessed using the Visual Analog Scale (VAS). The scale consisted of a 10 cm line (100 mm) with the left end designed as no pain at 0 and the right end showing intolerable pain at 10. All subjects were asked to determine the severity of pain by a small mark on the line (22).

All subjects responded to the International Knee Documentation Committee (IKDC) questionnaire to assess the function during daily activity, and the level of a symptom-free sports activity. The IKDC form contains seven items on knee symptoms, two items on function, and two items on sports activities. Scores ranged from 0 to 100 points, where 0 referred to the lowest level of function and 100 referred to the highest level of function (23). The Persian version of IKDC is a reliable, valid, and responsive measure for patients with ACL injury (24).

All subjects initiated similar conventional rehabilitation protocols according to the accelerated land-based rehabilitation protocol (17) for nine weeks, starting from day 1 post-surgery till the recruitment day. In week 9, subjects were randomized into two rehabilitation groups. The CT group continued to receive conventional rehabilitation, including strengthening, walking, and neuromuscular training (60 - 75 min, three sessions per week, for six weeks). The PT group received the same conventional rehabilitation in addition to innovative proprioceptive training. All subjects in this group underwent two sessions per week of innovative proprioception exercises for 45 - 60 min for six weeks. Each proprioceptive training session consisted of three parts: warm-up, main practice, and cool-down. The subjects performed a series of stretching exercises of the soleus, hamstring, and quadriceps muscles to avoid muscular fatigue. During exercises, subjects were not allowed to support themselves by the contralateral limbs or hands. If the subject lost his balance, he was asked to lean on the contralateral limb. The exercises were gradually increased in intensity according to individual ability. The progression of the proprioceptive training protocol is presented in Table 2 and Figure 1.

aThe foam roller was constructed over a rigid, hollow core with high-quality materials that would not break down or lose shape from repeated use. Dimensions: 66 × 15 cm with 150 kg weight limit. 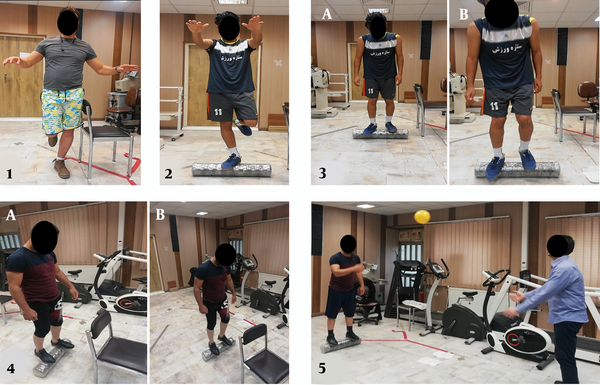 The independent t-test was used to analyze the differences in the anthropometric characteristics of subjects at baseline. A one-sample Kolmogorov-Smirnov test was used to check the normal distribution of the variables. The variables had a normal distribution. Thus, the independent t-test was used to assess the differences before and after the intervention within the groups. Repeated-measures analysis of variance (ANOVA) was used to compare the differences between the two groups. An effect size using Cohen’s d from the independent t-test was calculated to develop a deeper understanding of the clinical meaningfulness after the interventions. The relative size of Cohen’s d was used: negligible effect (≥ -0.15 and < 0.15), small effect (≥ 0.15 and < 0.40), medium effect (≥ 0.40 and < 0.75), large effect (≥ 0.75 and < 1.10), very large effect (≥ 1.10 and < 1.45), and huge effect > 1.45 (25).

The alpha level at 0.05 was considered statistically significant for all analyses. The SPSS version 25 software for Windows (SPSS Inc., Chicago, Ill., USA) was used for all analyzes.

Table 3. Mean and Standard Deviation of Results Before and After Intervention in Two Groups (N = 15) 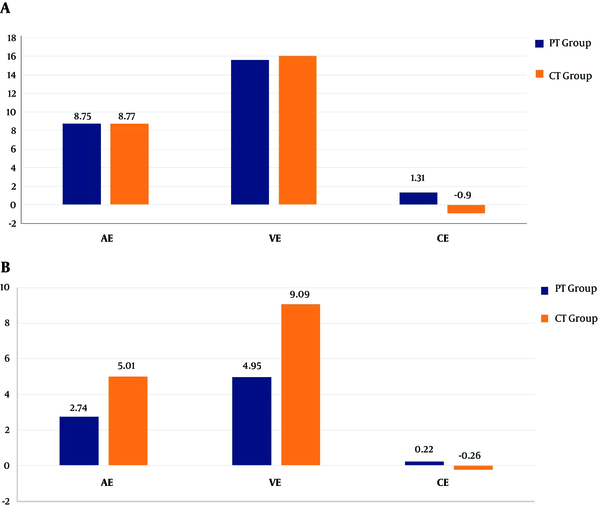 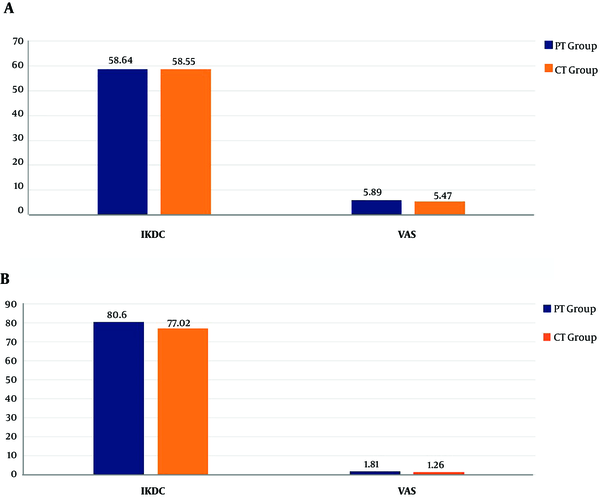 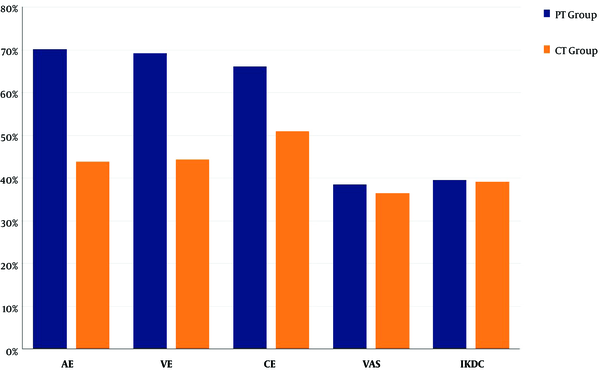 Percent change after the intervention in both groups

The proprioception assessment showed significant differences between the two groups after the intervention regarding JPS variables. The results of this study revealed that subjects who followed innovative land-based proprioceptive training incorporated into the conventional accelerated rehabilitation protocol had significantly reduced proprioception errors, which implies a reduction in proprioceptive deficit after the intervention. These differences between the groups can be attributed to several reasons. The unstable surface, the Foam Roller in our case of study, imposes a continuous activation of the muscles to maintain the stability of the body because there is no stable resting position on it. This unstable environment promoted the stimulation of the proprioceptive pathway, increasing sensory feedback and body awareness (5, 6). Moreover, when the patient is challenged to maintain his balance, this promotes neuromuscular coordination and proprioception efficiency (26). Furthermore, training with eyes closed stimulates other balance systems, especially the proprioceptive system, to compensate and develop a heightened awareness and create more efficient and effective movement (27).

The pain intensity was also compared in this study between the two groups. Proprioception is affected by the level of pain after ACLR because it increases the afferent discharge from pain receptors (type III and IV), and consequently, it is likely to perturb neuromuscular control about the knee joint and cause abnormal proprioception responses (28). The results of the current study showed that there was no significant difference in pain reduction between the two groups, with a decreased pain level found in both groups after the intervention. Pain reduction could be due to optimizing muscle strength and endurance around the knee joint, in addition to continuous improvement in tissue healing (17).

No significant difference in the IKDC score was found between the two groups. Both groups showed a significant improvement in IKDC. However, subjects who followed an innovative land-based proprioceptive training incorporated into the conventional accelerated rehabilitation protocol gained higher scores in IKDC. Thus, it was not surprising that increased proprioception efficiency and reduced pain were reflected in their quality of life and sports activities.

This study had several limitations. Our study recruited a relatively small number of subjects and included only male subjects with a hamstring tendon graft. Therefore, we cannot extend our findings to all individuals who are suffering from the side effects of post ACLR. Future studies should include larger samples, both sexes, and several reconstruction surgery techniques to generalize the results. Furthermore, although this study showed that proprioception efficiency improved after the innovative proprioception protocol, we did not run follow-up assessments to see the durability of these changes. Besides, this study did not include functional tests; thus, future studies should consider the functional tests (e.g., single-hop test, cross-over hop test, and triple-hop test) to assess the correlation between functional performance and improvement in proprioception gained after the intervention.

We would like to thank all the staff of the School of Rehabilitation who supported us during this study. Special thanks go to all participants for their kind contribution to this study.