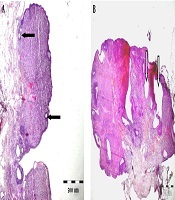 Polycystic ovary syndrome (PCOS) is a common endocrine disorder in premenopausal women. Brain functions may be affected in PCOS, and studies reported that PCOS patients are at greater risk for developing mental health conditions, including anxiety or depression.

This study was designed to evaluate the neurocognitive changes in letrozole-induced PCOS model.

Rats with PCOS showed a neurocognitive decline in the model of letrozole administration. Future studies should be conducted to clarify the exact mechanisms of these changes and possible approaches to restore them.

Polycystic ovary syndrome (PCOS), a common endocrine and metabolic disorder, is related to hyperandrogenism and anovulation (1, 2). The exact pathophysiology of this condition is not completely understood; in this condition, exaggerated gonadotrophin-releasing hormone pulsatility leads to hypersecretion of luteinizing hormone (LH) and causes increased ovarian androgen production and impaired oocyte development (3, 4). Moreover, environmental factors, including nutrition or lifestyle, can influence the expression of PCOS (3, 5).

Polycystic ovary syndrome is associated with behavioral alterations. Studies reported that women with PCOS are at a higher risk of depression (6, 7). On the other hand, the risk of mood and anxiety disorder is significantly higher in PCOS women, and they may show symptoms of generalized anxiety disorder, social phobia, and panic disorder (8). Data showed that memory dysfunction and cognitive deficits might occur in PCOS patients due to alteration in brain structures (9). So, finding a suitable approach seems important to encounter these problems.

Considering the abovementioned descriptions, as there is not enough data about the effects of PCOS on neuro-behavioral changes in animals in different experimental models and on the other hand, as there are not suitable approaches for the treatment of cognitive-related disorder in PCOS; we aimed to use a standard model of PCOS (letrozole-induced) in rats to detect the possible changes in memory or to evaluate the anxiety- and depressive-like behaviors.

Twenty female Wistar rats (eight-week-old; 160 ± 10 g) were used in this study (from animal house of Rafsanjan University of Medical Sciences). Animals were maintained in the standard laboratory condition at 22 ± 2°C with a 12 hours light/dark cycle with free access to food and water (12). All experiments were conducted in accordance with the US National Institute of Health (NIH publication no.: 85.23, revised 1985) guides for the care and use of laboratory animals.

Letrozole was purchased from Aburaihan Pharmaceutical Co. and was prepared in suspension with carboxymethyl cellulose (CMC).

Twenty-four hours after the last administration, the behavioral tests were performed as described below:

Forced swimming test (FST) is considered a valid method for assessment of depression in animals. Rats were placed in a cylindrical tank (50 cm height × 25 cm diameter) filled with water (temperature 23°C - 25°C). Animals were allowed to swim freely for six min. Immobility was defined as a static state in the water, and this time was recorded as an index. High immobility time represents depression (13).

Open field test was used to determine the locomotor activity and anxiety-like behaviors on day 22 of the experiment. Female animals were placed in a 50 × 50 × 50 cm white box individually for a duration of 5 min. This box was divided into two zones: central and peripheral. The activity of animals in the box was monitored and analyzed using video-tracking software (EthoVision 7.1, Noldus Information Technology, The Netherlands). At the beginning of the session, each rat was placed in the center of the arena. The following behavioral parameters were measured: the time that the animal spent in the central zone (s) and traveled distance (cm). At the end of each session, the animal was removed from the open field, and the chamber was cleaned with ethanol (10%) (14).

Ovaries were removed after termination of the behavioral assessments (after 22 days) by a surgical procedure. They were fixed in 10% formalin, then embedded in paraffin, and sectioned at 5 µm. Afterward, staining with hematoxylin and eosin (H and E) for light microscopic examinations was performed (15).

All data were expressed as mean ± SEM, and all comparisons were made by student t-test analysis. The differences were considered significant at P < 0.05.

4.1. Effect of PCOS on Depressive-like Behaviors

Forced swimming test (FST) data revealed that the immobility time in animals treated with letrozole was significantly higher than in the control group (P < 0.001, Figure 1). 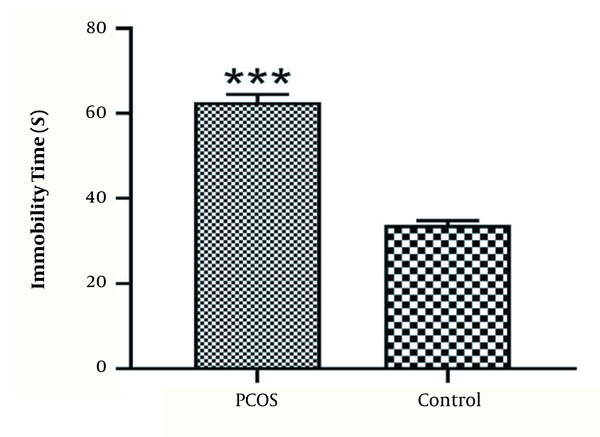 4.2. Effect of PCOS on Anxiety-like Behavior and Locomotor Activity

For anxiety-like behaviors, rats in the PCOS group spent less time on the central zone compared to the control group (P < 0.05) (Figure 2A). Locomotor activity showed no difference among the groups (Figure 2B).

4.3. Effect of PCOS on Working Memory

We used Y-maze to evaluate the working memory and expletory behavior. Rats in the PCOS group have lowered percent of correct alternations compared to the control group (P < 0.05) (Figure 3). 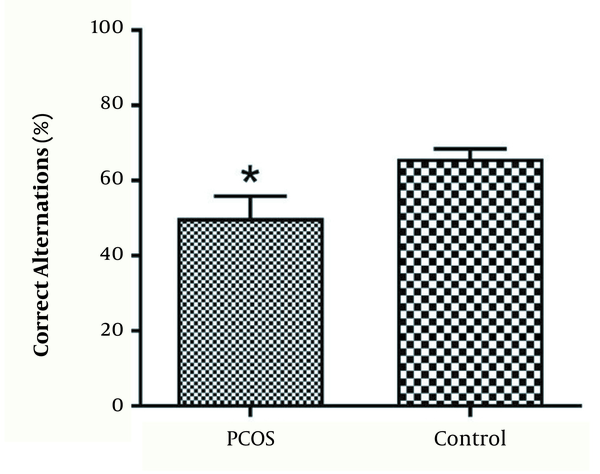 4.4. Effect of PCOS on Histology of Ovaries

The microscopic view of rat ovaries. A, Normal ovaries with primary follicles; B, cystic ovaries with Graafian and cystic follicles.

PCOS, a complex multifactorial disorder, affects approximately 6% to 20% of women in reproductive age. Typical presentation includes irregular menses, hirsutism, chronic anovulation, and infertility. After diagnosis, the interventions such as using metformin, oral contraceptive pills, spironolactone, and local treatments for acne and hirsutism and lifestyle changes can be recommended (16, 17).

Patients with PCOS can encounter psychological disorders such as depressed mood, fatigue, sleep disturbance, and poor concentration, but depression is the most commonly diagnosed problem among all (18, 19). Yu et al. (18) reported that dehydroepiandrosterone-induced PCOS mice exhibited depressive-like behaviors via brain monoamine or their metabolite level modulation. Our data is in line with this study, and we showed that letrozole-induced PCOS led to depression-like behavior in rats.

Cooney et al. reported that PCOS is associated with an increased prevalence of moderate to severe depression and anxiety symptoms in patients (20, 21). Ressler et al. (22) showed that dihydrotestosterone-induced PCOS could be related to weight gain, glucose intolerance, and anxiety behaviors. Our results revealed that PCOS animals exhibit anxiety-like behaviors in letrozole-induced model paralleled with previous studies.

The exact mechanisms of development of anxiety and depression in PCOS are not clearly understood, but altered insulin secretion and insulin resistance, obesity, low levels of serotonin and other neurotransmitters, hypothalamic pituitary adrenal (HPA) axis disturbance, and female hormone disturbance may play a role in its pathophysiology (23, 24).

Our study showed that animals with PCOS exhibit impaired working memory, so finding an approach against memory impairment could be of great importance, and clarification of the exact mechanism may be a challenge for future studies. One study investigated the effects of androgens overexposure and antiandrogenic therapy on brain activity during working memory processes in women with PCOS (25). However, there are not enough studies investigating the cognitive function, memory, or risk of disease such as Alzheimer's disease in patients with PCOS.