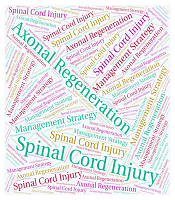 Does There Exist a Hope to Provide an Effective Treatment for Complete Spinal Cord Injury?

Patients with complete spinal cord injury (SCI) suffer irreversible loss of motor and sensory functions, and this brings in innumerable psychological and socio-economic burdens. In 2500 BC, Edwin Smith’s papyrus stated that SCI was an “ailment not to be treated”. Thousands of years since then, it appears most vividly that supportive care is the only treatment that can be provided to SCI patients (1).

The primary cause of permanent disability has been unequivocally mentioned to be the failure of axon regeneration and neuronal circuit reconstruction (2). Until the date that this article is being complied, there are no effective treatments that can completely regenerate axons after SCI. In the cases of severe and complete SCI, stem cell transplantation has been employed to replace lost cells and restore neural circuitry. Unfortunately, most of the studies conducted so far have failed to convincingly verify the re-establishment of neural circuits. The irony of fate is that the science has so far failed to provide effective solutions to induce the regeneration of axons after SCI. In the preceding decades, combinations of biomaterials, stem cells, growth factors, innumerable drugs, and exosomes have widely been developed and tried but to no avail (3). Since a plethora of pathological processes ensues SCI, combined strategies may probably be helpful in leading to a relatively better functional recovery. Nevertheless, functional recovery is an exceedingly difficult task to achieve and depends on strengthening neuroplasticity to promote the growth of injured and spared axons (3, 4). Leibenger et al. should be lauded for their study, which in fact is a milestone as far as functional recovery after SCI in adult mammals. They could achieve recovery in mice after one-time unilateral application of AAV2-h IL-6 into the sensorimotor cortex. According to their study, this approach was proved to be useful, supporting their hypothesis to activate regenerative signaling (5). However, extrapolating these findings to humans with SCI is perhaps a far-fetched if not a utopian dream owing to the failure of treatments in this population.

The current millennium awaits giant leaps in designing effective management strategies to offer solace and a marginal improvement in the daily functions of ill-fated patients with SCI (6).

In conclusion, we would like to state that the spinal cord, after complete SCI, is exceedingly difficult terrain, perhaps an uncharted territory and a dangerous zone, where even angels fear to tread on.

Copyright © 2021, Author(s). This is an open-access article distributed under the terms of the Creative Commons Attribution-NonCommercial 4.0 International License (http://creativecommons.org/licenses/by-nc/4.0/) which permits copy and redistribute the material just in noncommercial usages, provided the original work is properly cited.
2021-04-22 07:59:45
As members of international society of neurorestoratology and neurosurgical society of Islamic Republic of Iran, we have encountered lots of cases with quadriplegia; either traumatic or non-traumatic spinal cord injuries (SCIs);a drastic and overwhelming situation that no other pathological condition can reproduce such a level of disability. The Edwin smith papyrus by Hippocrates the great thousands of years ago described SCI '' an ailment not to be treated'' while the victim survived for a few days at those times. But now a days SCIs and quadriplegics survive for a long time and some may produce great scientific theories such as Big Bang by Stephen Hawkings, or play very important social roles such as Franklin Roosevelt. Therefore we have to make efforts to keep them hopeful; either by modern rehabilitation procedures and/or devices or by neurorestoratologic programs. This is the least that we can do for these colleagues. This hope is the most important psychological step in the rehabilitation program of severe SCIs.