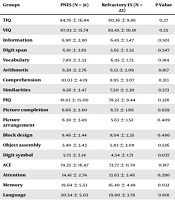 Both epileptic seizures (ES) and psychogenic non-epileptic seizures (PNES) are often associated with some degree of cognitive impairment. Video electroencephalography (EEG) monitoring is the gold standard for diagnosing PNES. This diagnostic procedure is costly and available in specific tertiary centers. Neuropsychological assessment can provide clues for the differential diagnosis of PNES and ES and help clarify the nature and etiology of these two disorders.

Therefore, this study aimed to compare the neuropsychological profiles of PNES and ES patients.

In this analytical cross-sectional study, 30 patients with ES and 31 patients with PNES were compared by neuropsychiatric tests, such as the Wechsler Adult Intelligence scale (WAIS), Addenbrooke’s Cognitive examination (ACE), and California Verbal Learning test (CVLT).

This study showed that neuropsychological assessments might not differentiate ES from non-epileptic seizures.

Psychogenic non-epileptic seizure (PNES) is characterized by paroxysmal changes in responsiveness, sensory-motor movements, consciousness, and behavior that can mimic epileptic seizures (ES) (1, 2). PNES does not occur as a result of paroxysmal neuronal dysfunction in the cortex (2). Also, electroencephalography (EEG) shows no epileptic changes (3). PNES is classified as a conversion disorder (a functional neurological disorder), according to the diagnostic and statistical manual of mental disorders (DSM-5) (4). PNES may occur at any age during life; however, it peaks during adolescence and early adulthood.

The prevalence of PNES is two to three times higher in females than males (5, 6). The diagnosis of PNES is established after medical (e.g., ruling out cardiogenic syncope) and neurological assessments, including video EEG monitoring and ruling out ES (7, 8). Video EEG monitoring is the gold standard for diagnosing PNES (8). On the other hand, an ES refers to a self-limiting and abnormal cortical neuronal discharge. It is defined as a brain dysfunction with neurobiological, cognitive, psychological, and social consequences (9). Both PNES and ES are paroxysmal disorders in nature, and EEG cannot necessarily differentiate them if they are associated with interictal episodes (8).

A typical attack may occur during video EEG, which is the gold diagnostic standard for PNES. This diagnostic procedure is costly and available in specific tertiary centers (3). Therefore, differentiating between PNES and ES is challenging (6) and can lead to delays in diagnosing PNES. This diagnostic delay has been reported in various studies and may be seven to eight years since the onset of symptoms (6, 8). Due to diagnostic delay and misdiagnosis, a large number of patients with PNES receive anticonvulsant medications until they are accurately diagnosed. However, many of these medications can cause adverse effects for patients (6) and impose costs on patients, communities, and healthcare systems (7). Therefore, finding accurate and available ways to diagnose and differentiate these two disorders can help specialists determine the etiology and dynamics of both disorders (10).

Patients with PNES often complain of cognitive problems that can lead to impaired function (11). Although both PNES and ES are often associated with some degree of cognitive impairment, and these patients show poorer neuropsychological performance than healthy individuals (6), due to the organic nature of epilepsy, ES patients show more deficits in neuropsychological tests than PNES patients (9). Overall, few studies have examined the differences in the cognitive profile of patients with PNES and ES, and the findings of these studies are inconsistent (11, 12).

The present study aimed to compare the neuropsychological profiles of patients with PNES and ES.

In this analytical cross-sectional study, the participants were divided into ES and PNES groups. The subjects were recruited among patients referred to the Neuropsychiatry Clinic of Imam Khomeini Hospital, affiliated to Tehran University of Medical Sciences (Tehran, Iran), as well as patients referred by an epileptologist. Patients with suspected PNES were examined by an epileptologist and a psychiatrist, and after confirmation by video EEG monitoring, the final diagnosis was established. Also, patients in the ES group were examined by an epileptologist. Both groups were interviewed by a psychiatrist in a semi-structured clinical interview based on DSM-5.

This scale was used to evaluate the full-scale intelligence quotient (FSIQ), as well as verbal and performance IQ. All subscales of this test were recorded for the patients. This test was used to assess concentration, attention, working memory, executive function, and visuospatial processing. The Wechsler Adult Intelligence scale-fourth edition (WAIS-IV) test was selected because it is a valid test for assessing performance intelligence and verbal intelligence, as well as measuring different cognitive domains specifically. Also, one of the objectives of our study was to compare intelligence quotient in two groups of patients with seizures and patients with PNES (15).

As ACE is a suitable test for cognitive function screening, it was used for the assessment of attention, memory, verbal fluency, language, and visuospatial processing (16). In this study, the validated Persian version of Addenbrooke’s Cognitive examination (ACE-C) was used (17).

Statistical analysis was performed in SPSS version 22.0. Descriptive statistics (frequency, mean, and standard deviation) were calculated, and an independent t-test was used to compare the cognitive domains. Pearson’s chi-square test (two-tailed) was also used to assess the correlations between variables. P-value of less than 0.05 was considered statistically significant.

In this study, 30 patients with ES and 31 patients with PNES were compared. The demographic data of the patients are presented in Table 1. The sex distribution was significantly different between the PNES and ES groups (P = 0.003). In other words, there was a female predominance in the PNES group (female-to-male ratio = 4.16/1), whereas, in the ES group, there was a male predominance (male-to-female ratio = 1.3:1). The frequency of seizures was higher in the PNES group in the past month and the last six months, compared to the ES group; however, the difference was only borderline significant over the last six months (P = 0.497 and 0.058, respectively). Other seizure-related characteristics are presented in Table 2.

Table 1. Demographic Characteristics of the Groupsa

Table 3. The Mean (± SD) Results of Neuropsychiatric Tests in the Groupsa

Moreover, a subgroup analysis was performed, in which the group with PNES was compared with resistant epileptic patients in the ES group (Table 4). Twenty-two patients in the ES group were refractory cases and were included in the subgroup analysis. As shown in our previous analysis, the mean score of total IQ was higher in the PNES group (84.7 ± 16.94) than the group with refractory epilepsy (80.36 ± 8.86); however, the difference was not statistically significant (P = 0.27). Although the mean scores of verbal and performance IQ in the PNES group were higher than the refractory ES group, the difference was not significant (P = 0.35 and 0.32, respectively). Similarly, the mean scores of CVLT and ACE were higher in the PNES group, but the differences were not statistically significant (P = 0.51 and 0.18, respectively). Based on the assessment of the mean subscale scores, the digit symbol score (WAIS-IV subscale) and memory score (ACE subscale) were significantly higher in the PNES group compared to the group with refractory ES (P = 0.037 and 0.032, respectively) (Table 4).

In this study, there was a female predominance in the PNES group (male-to-female ratio = 4.16/1), which is consistent with previous studies (8, 19, 20). The frequency of psychiatric disorders was 77.4% in the PNES group and 66.4% in the ES group, respectively, which was not significant. The most common disorder in both groups was MDD, which is consistent with some previous studies (5, 8). Some studies have also shown that psychiatric disorders are common in patients with PNES and ES (12, 21).

In the present study, there was no significant difference in the mean score of total IQ between the two groups. We also found similar results in the subgroup analysis by comparing the PNES group with the resistant ES group. Most previous studies have either used tests other than WAIS-IV or compared PNES patients with a control group. However, Tyson et al. (6) applied the WAIS-IV test and reported significantly higher total IQ scores in the group with PNES. This difference in the present study and Tyson et al.’s study could be due to the heterogeneity of patients with PNES and patients with epilepsy which could affect the results (20). The mean score of total intelligence was 84.77 ± 16.94 in the PNES group. This finding is consistent with the findings reported by Willment et al. (11), which showed that the mean total IQ score of the PNES group was under 100. The mean total score of IQ test indicated borderline intelligence to lower limit of normal range in both groups. Some authors have reported that the IQ range of both PNES and ES populations is often in the quartile range of normal IQ (12). Some studies have attributed the low IQ in patients with PNES to impaired attention and working memory (11). In the present study, there was no significant difference in the mean verbal and performance IQ scores between the groups. To the best of our knowledge, no previous study has examined verbal and performance IQ scores in the ES and PNES populations.

No significant difference was found between the PNES and ES groups regarding the WAIS-IV subscales (information, digit span, vocabulary, arithmetic, comprehension, similarities, picture completion, picture arrangement, block design, object assembly, and digit symbol), ACE subscales (attention, memory, language, verbal fluency, and visuospatial), and CVLT. A recent study showed that verbal and performance IQ were not significantly different between patients with ES and PNES. They also observed that attention and inhibitory control were significantly impaired in patients with PNES, compared to the control and ES groups. There was a significant positive association between IQ and attention and inhibitory control (22). Also, we obtained a similar result in the subgroup analysis, except for the digit symbol and memory component of the ACE test. According to our study, the group with PNES performed better in the digit symbol and memory subscales compared to the refractory ES group. However, the sample size was small in this study, and this result should be interpreted with caution. Therefore, in this study, no significant difference was found between the PNES group and the ES group in terms of attention, working memory, speed processing, visuospatial processing, and verbal learning.

The results of some previous studies are controversial, as they found weaknesses in attention and working memory of the group with PNES (5), while attention and working memory were similar in the two groups (12, 20, 23). In keeping with our subgroup analysis, previous studies found worse cognitive disorders in refractory epileptic patients. They also found that the most common cognitive disorder in these patients was memory impairment (20, 24); it seems better to recruit patients with equal seizure attacks for more accurate results. However, in the subgroup analysis, despite comparisons with refractory epileptic patients, the two groups were similar in most cognitive domains. Also, other studies found PNES as a brain network disorder that results in specific neuropsychiatric symptoms (25).

The main limitation of the present study was the lack of homogeneity in the frequency of seizure attacks. On the other hand, we only conducted semi-structured interviews for the psychiatric diagnosis. Finally, small sample size is another limitation for the current study, so the authors suggest further studies with a larger sample size.

This study showed that the ES and PNES groups both had similar neuropsychiatric profiles, especially in most neurocognitive domains. It seems that attention to cognitive complications in PNES patients is as important as ES patients. These findings can confirm brain function disorder in PNES patients.