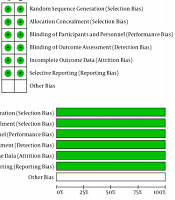 Does Caffeine Consumption Affect the Symptoms of Parkinson’s Disease? A Systematic Review of Clinical Trials

This systematic review of the literature was carried out to see whether coffee consumption could affect Parkinson’s disease (PD) symptoms.

Randomized controlled trials (RCTs), crossover studies, and quasi-experimental studies were assessed to evaluate the effect of caffeine on PD. The databases including Medline/PubMed, ProQuest, Embase, Cochrane Library, and ClinicalTrials.gov were systematically searched. The Cochrane Collaboration’s tool for assessing the risk of bias in randomized clinical trials and the Cochrane risk of bias assessment tool for non-randomized studies of interventions (ROBINS-I) were used to assess the quality of RCTs and non-randomized clinical trials, respectively. A meta-analysis of the results was not possible because of reporting different outcomes.

Parkinson’s disease (PD) is the second most common neurodegenerative disorder, which is commonly characterized by resting tremor, bradykinesia, rigidity, gait disturbances, and postural instability. About one to three percent of people aged 65 years or older are affected by PD. Although the pathogenesis of PD is not fully clarified, the degeneration of dopaminergic neurons of the substantia nigra, locus coeueus, and other brain stem dopaminergic cell groups, with the progressive loss of dopaminergic neurons terminals in the striatum, is responsible for most of the weakening features of the disease (1, 2) It is thought that multiple genetic and environmental factors, either as risk or protective factors, have a role in the development and progression of the disease (3, 4).

Caffeinated beverages, particularly coffee and tea, are the most popular and commonly consumed beverages worldwide (5). Although several studies have shown a dose-dependent inverse relationship between caffeine consumption and the risk of developing PD, more research still seems necessary. The systematic review and meta-analysis of observational studies have demonstrated a 25 - 30% reduction in the risk of PD among caffeine consumers, and there is a linear dose-response relation; the higher is the consumption of caffeine, the lower is the risk of PD (6-8). Caffeine is a nonselective competitive blockade of adenosine receptors, especially adenosine A1 receptors and A2A receptors, and it has stimulant effects on locomotion by the A2A receptor blockade (9, 10). Caffeine, as an antagonist of adenosine A2a receptors, has been shown to have a protective role against PD in animal models (11).

Given studies about caffeine effects, it seems that caffeine has neuroprotective effects on the progression of PD symptoms. Several clinical trials have indicated conflicting findings of the association of caffeine and the onset or progression of PD symptoms, especially motor symptoms. Therefore, it is still unclear whether caffeine consumption or supplementation can positively or negatively affect PD symptoms. Moreover, to the best of our knowledge, there is no published systematic review about the effects of caffeine consumption on the symptoms of PD. Additionally, most of the performed systematic reviews have focused on the association of caffeine and the risk of PD, mostly performed with observational studies.

We conducted a systematic review of clinical trials to quantify the association between caffeine intake and the progression of PD symptoms.

Randomized controlled trials (RCTs), crossover studies, and quasi-experimental studies were assessed to evaluate the effect of caffeine on PD. The databases, including Medline/PubMed, Embase, ProQuest, Cochrane Library, and ClinicalTrials.gov were systematically searched until August 2020 without a restriction of publication date. The databases, including Web of Science and Google Scholar were also evaluated manually. The MeSH terms, as well as free keywords, were used for the search. Based on the searched databases, the following keywords were used singly or cross-linked: ‘Parkinson’s disease’, ‘Parkinson’, ‘Parkinsonism’, ‘caffeine’, ‘coffee’, and ‘tea’. The results were presented following the PRISMA guidelines.

In this study, all types of clinical trials including RCT, crossover, before-and-after, and quasi-experimental studies evaluating the effects of caffeine on PD were included. Only full-text articles published in the English language were evaluated. Books, book chapters, reviews, letters, short surveys, abstracts, conference abstracts, commentaries, studies based on the description of a protocol or perspective of the authors, and comments on an article were excluded.

Study participants were patients with idiopathic PD stage I - IV (Hoehn and Yahr Scale). Patients with daily caffeine intake > 150 mg assessed by a standardized intake questionnaire (12), supraventricular cardiac arrhythmia, uncontrolled hypertension, malignancy, active peptic ulcer disease, premenopausal women not using birth control, other progressive neurological disorder, patients with migraine or other headache types related to the consumption of coffee, clinically significant psychiatric illnesses or psychotic symptoms, dementia Folstein Mini-Mental State Examination < 23/30 with consequent activities of daily living impairment, Beck Depression Inventory scores ≥ 15, history of alcohol abuse or other substance abuse within the past two years, severe intolerance or allergy to caffeine, another untreated reversible cause of EDS, use of prescribed alerting agents, another adenosine antagonist, lithium or clozapine, and changes to antiparkinsonian medication in the last three months were excluded from the study.

3.3. Types of Interventions and Comparison

In all studies, interventions included caffeine as dose-escalation, which was started with 200 mg/day and increased during the study until the patient tolerated it. The comparison group received a placebo or no intervention.

Two authors (AR and EF) independently evaluated the acceptability of the papers. In the case of disagreement between the authors, the study was first discussed, and if the disagreement persisted, the final decision was made consulting with the third author (SS). The Cochrane Collaboration’s tool for assessing the risk of bias in randomized clinical trials was used for assessing the quality of RCTs (15). This is a standard tool that evaluates the methodological quality of clinical trials for detecting any bias such as selection bias, performance bias, detection bias, attrition bias, reporting, and other biases.

The guidelines of the Cochrane handbook for systematic reviews of interventions were used to design the data collection form (17). The information included the name of the authors, publication year, study type, sample size, age of participants, intervention, comparison group, follow-up duration, outcomes, outcome measurement, results, and side effects. The corresponding author of the original study was contacted via email in case of incomplete or ambiguous data.

The database search resulted in 2,276 papers, of which 1,555 papers remained after removing duplicates. After a review of their titles and abstracts, 1,463 records were excluded because they were inappropriate for inclusion. The full texts of the remaining 92 potentially related studies were obtained. Eighty-eight studies were excluded because of not meeting the inclusion criteria, and the remaining four papers (18-21) were included in the study. The PRISMA flowchart of the study is shown in Figure 1. Table 1 shows the general characteristics of each study. Table 2 and Figures 2A and B show the risk of bias in RCTs, and Table 3 shows the risk of bias in non-randomized studies. 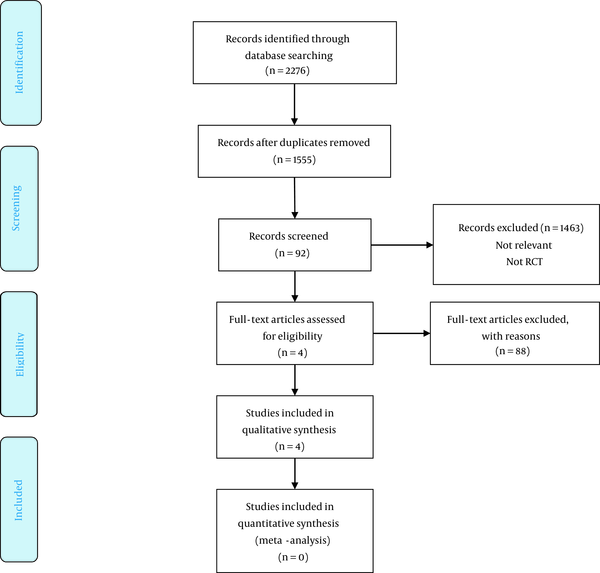 Table 1. Characteristics of Included Studies
Table 2. Risk of Bias in RCTs According to the Cochrane Collaboration’s Tool 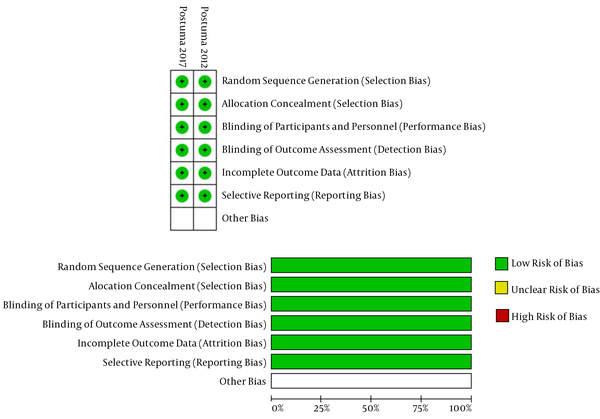 In all studies, ESS and UPDRS were evaluated by the same methods (13, 14). The findings of two studies were presented as the mean ± SD and the other ones reported as the mean and 95 or 80% confidence interval. Since the duration of intervention was very different from five days to 18 months and the number of studies was low, it was not possible to combine the data and conduct a meta-analysis.

Among the included papers in the study, two studies were quasi-experimental single-arm clinical trials (18, 20), one of which was an open-label study (18), and the other one was an n-of-1 trial (20). The others were RCTs and used sequence allocation using a computer program and a random number table. Blinding was described in both studies, which were double-blinded.

In all studies, participant withdrawal was reported, but only two studies included an intention-to-treat analysis (19, 21). In the n-of-1 trial, the final analysis was performed on patients who completed the study (20).

The protocols of the two RCTs were available (19, 21), and therefore considered to have a low selective reporting bias (Table 2).

Table 3. Risk of Bias in Non-randomized Studies According to ROBINS-I

4.4. The Effect of Caffeine on ESS

4.5. The Effect of Caffeine on UPDRS

4.6. Comparison Between Caffeine and Placebo and Their Effects on ESS and UPDRS

One of the RCTs reported no significant effect of caffeine on ESS and UPDRS as compared with placebo (21). In comparison with placebo, the other one reported that caffeine reduced UPDRS after three weeks, but this change was significant after a six-week intervention. Moreover, after excluding the four protocol violations, there was a significant reduction in ESS scores in the sixth week.

Parkinson’s disease is the second most common neurological disorder (1). Various case-control and cohort studies have suggested a large number of environmental factors for predicting the risk of PD (8, 22), of which caffeine intake is one of the most well-established protective factors (6, 23-27).

Although caffeine is known to be an antagonist of adenosine A2a receptors, it has been suggested to act as an A2a inverse agonist (28). Caffeine and other more specific A2a receptor antagonists are shown to have neuroprotective effects in animal models of PD (29).

These data have led to the hypothesis that caffeine may have a neuroprotective effect in PD. Therefore, there are many studies evaluating the effect of caffeine consumption/supplementation on PD progression, movement, sleep disorders, etc. The findings of these studies are inconclusive, and it cannot be concluded if caffeine consumption can improve or worsen the symptoms. Thus, we reviewed the published article about the effects of caffeine supplementation on ESS and UPDRS.

On the one hand, not reporting the mean and SD and reporting different outcome measures made performing a meta-analysis impossible; on the other hand, a low sample size of studies, a vast variation in the duration of interventions, and a low number of eligible studies made it difficult to come to a definite conclusion about the effect of caffeine in PD. Moreover, they made data combining impossible.

5.2. Similarities and Differences in Relation to Other Studies

This systematic review is the first to assess exclusively the clinical trials that evaluated the effect of caffeine supplementation on ESS and UPDRS in PD. All the included studies reported the side effects of caffeine. We included the clinical trials, to avoid the influence of the bias of observational studies. Well-designed RCTs are needed to be performed in the future.

Several limitations should be noted in our study. One of the limitations of this systematic review is the quality of trials included. Some of the trials were not well-blinded or properly randomized. The sample size of some included studies was small. In addition to the methodological limitations of the original studies, the duration of intervention was very different in different studies, which made it difficult to come to a definite conclusion about the effects of caffeine on PD. Finally, we assumed that most of the well-designed RCTs would have been published in English journals, and consequently, we restricted our search only to English studies.

Finally, the authors should follow standard international guidelines such as CONSORT guidelines when reporting their results and should appropriately design the protocol before beginning a study.