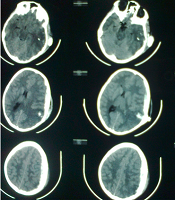 Brain penetrating blast injury is a leading cause of early death due to excessively elevated intracranial pressure (ICP), culminating in trans-tentorial herniation. The role of craniectomy to decrease ICP and secondary injuries has been controversial particularly in pediatric patients. Three cases of pediatric penetrating blast injuries undergoing decompressive craniectomy are reported in

The current study was a prospective series, including fifteen cases of pediatric blast-related brain injury referred to the emergency ward during a period of two years. Three survived patients had a Glasgow Coma Scale (GCS) of four along with anisocoric pupillary light reflex (PLR). Decompressive craniectomy and ventriculostomy (EVD) were performed. The patients underwent ICP monitoring for two weeks.

Early postoperative GCS (5 days) was 7/15 in all three patients. Two weeks and one month’s GCS were 9 and 14, respectively. After three months, cranioplasty was performed. Long-term follow-up detected no major motor deficits after one year and was associated with excellent school performance. Neuroplasticity resulted in contralateral dominancy and handedness in one case.

Survivors of pediatric blast brain injury had a favorable outcome after decompressive craniectomy in the current paper. However, there was a limited number of patients, and the results could not be generalized. Further research in this regard with larger sample size is recommended.

Land mines could cause severe injuries, especially in children even after the end of war. Children still become injured by dormant explosive weapons (e.g., mines, homemade grenades) used at the western border area of Iran due to recent Iran-Iraq war lasting from September 1980 to August 1988 (1, 2). Decompressive craniectomy (DC), has been used as the procedure of choice for over a century as a treatment of refractory brain swelling in a variety of neurological conditions and plays a vital role in neurosurgical management of explosive blast injury in battlefields (3) allowing for safe transference of poor neurologically damaged patients to military or local hospitals.

Severe pediatric traumatic brain injury (TBI) presents substantially different than in the adult counterparts, including non-penetrating TBI (also known as closed head injury or blunt TBI) and penetrating injury. Younger patients generally have better outcomes; however, age alone should not be used as exclusion criteria for surgical intervention. Better outcomes in children would be explained by several factors such as low level of chondroitin sulfate proteoglycan glycoproteins, which is responsible for rigidity and support of parenchyma (4, 5). The low levels of chondroitin sulfate results in increased plasticity. Other factors of favorable outcome include the role of glutamate, cell metabolic death, and biomechanics (4).

Although several studies have demonstrated the useful role of decompressive craniectomy in adults and children with various traumatic brain injury conditions, there is the paucity of literature regarding severe brain injuries caused by land mines in pediatrics. As mortality after land mine injuries is significant, and land mines can be the leading cause of death, effective management should be considered in the acute phase of injury. Herein, a series of pediatric patients suffering from penetrating blast injury is presented to evaluate the outcome of decompressive craniectomy in pediatric blast injury cases (1, 6). To the best of our knowledge, the current study is the first case series reporting outcome of decompressive craniectomy in pediatric penetrating blast injuries.

A prospective study was performed on fifteen cases of pediatric blast injury due to land mines explosion in Iran along Iraq border during two years. The information, including demographic data, preoperative general physical exam, neurological exam, and radiologic evaluations, were recorded after receiving informed consent from the patient’s parents/family. The study was approved by local ethical committee. As a mainstay of clinical examination Glasgow Coma Scale (GCS) was assessed again after early assessment and resuscitation. Brain CT scan was done, and the survived patients underwent neurosurgical operation, including decompressive craniectomy when indicated. Here, GCS was reevaluated on daily basis postoperatively, and general physical examination was repeated as well. Survivors were followed at 1, 3, and 12 months after surgery.

The surgical approach included hematoma evacuation and brain debridement. Accessible foreign bodies were removed without any try to remove deep objects; no debridement of deep foreign body tracts was performed. Due to the unilateral brain herniation, decompressive unilateral fronto-temporo-parietal craniectomy was done with wide temporal durotomy. During surgery ventriculostomy (EVD) was placed for postoperative ICP management. Dural grafting was performed with application of fascia lata and bovine dural patch in a way that the larger part of graft was placed on the herniated brain, and the base of dura was left open. Prophylactic antibiotics and antiepileptic were administered. Lobectomy was not performed. Barbiturate coma was applied for 48 hours with Paco2 set at 32 - 35 mmHg under close observation and ICU care. The average mean arterial pressure was preserved at about 70 mmHg. 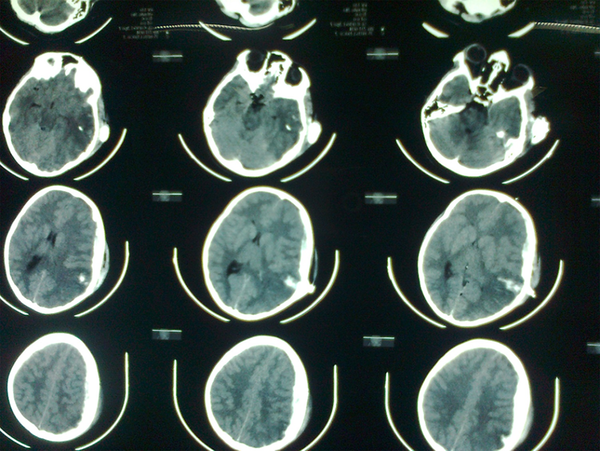 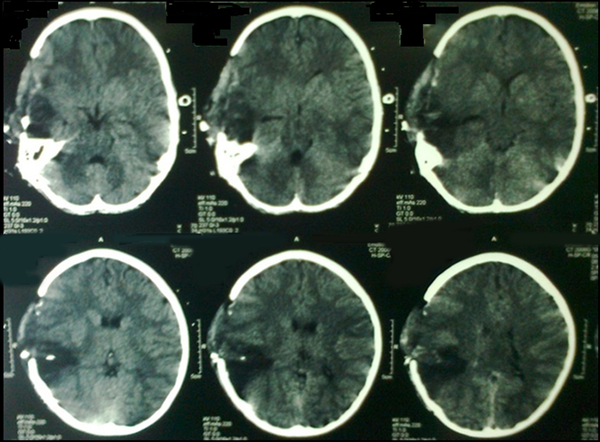 Due to the critical condition of patients (GCS 4 and midline shift), there was a need for urgent surgery; therefore, ICP monitoring was not applied in the first place before surgery. During surgery, EVD was placed for postoperative ICP management. For each patient, intraventricular ICP monitoring was performed for two weeks in ICU. For ICP values greater than 20 mmHg for more than 15 minutes, which were resistant to head elevation and diuretics, aggressive ICP management was applied. Aggressive ICP management included CSF drainage and hyperventilation.

Early postoperative GCS (5 days) was 7/15 in all three patients. Two-week and one-month GCS were 9 and 14, respectively. After three months, cranioplasty was performed. Long-term follow-up detected no major motor deficits after one-year with excellent school performance. Neuroplasticity resulted in contralateral dominancy and handedness in one case. Therefore, the right-handed child was able to write with left hand.

In the current study, three out of 15 pediatric patients underwent a DC due to penetrating blast injury, and all of them survived. According to one-year follow-up, the school performance was considerable in all of them. GCS and neurological exam were not reliable predictors of outcome. To the best of our knowledge, the current study is the first homogenous case series reporting outcome of decompressive craniectomy in pediatric penetrating blast injuries.

Primary blast injury mostly affects air-filled organs (7). However, death or injury to all other organs is caused by secondary blast injury due to penetrating foreign bodies. Blast-related brain injury may result in brain edema or hemorrhage (8, 9). During Iran-Iraq war from September 1980 to August 1988, the large bulk of patients indicated that deep foreign bodies do not carry risk of infection; therefore, no surgical intervention was required except in trans-ventricular injury or CSF fistula, which obviates surgical intervention (10). However, retained metallic objects would be a risk factor for epilepsy (10). Debridement of deep foreign bodies was avoided in the current series to prevent further neurological damage.

Within the combat field, military neurosurgeons have learned to become aggressive in neurosurgical resuscitation of victims of blast-induced neurotrauma. Brain CT is frequently not indicative of the severity of blast injury to the brain and is not predictive of the degree of intracranial hypertension and brain edema (2). Intraoperative findings are more severe than expected, and decompressive craniectomy seems helpful. According to the guidelines for the field management of combat-related head trauma, GCS score is not a limiting factor for aggressive surgical intervention anymore (11). Decompressive craniectomy was found to be superior to Barbiturate coma in military setting (11).

Regarding the timing of craniectomy, it is suggested to be done during the first four hours (7, 12, 13). Low GCS associated with large brain shift and compressed cisterns are the best indications for DC. Usually, more edema and hyperemia than CT scan could be visualized in surgical view, which makes larger bony and dural openings necessary (12-15). Further durotomy is indicated; otherwise, the operation is ineffective in reducing ICP. The dura may be remained open. However, lobectomy is not usually required with early DC (2, 7, 14, 15).

Several trials have evaluated the role of DC in pediatric TBI; however, penetrating blast injuries have not been well studied and not separately reported. Ragel et al. reported five cases of DC, including children and adult patients suffering from non-specified wartime trauma (13). There is a clear lack of studies investigating long-term outcomes following blast-associated head injuries, including cognitive, intellectual, and functional sequelae. Cerebral hemorrhage and direct cranial damage following blast have been attributed as a leading cause of death in children responsible for 46 - 71% of fatalities.

Considering all kinds of TBI, Taylor et al. confirmed favorable outcome for craniectomy in pediatric TBI patients in comparison to the control group receiving medical treatment, at six months follow up (5). However, others achieved different results. They came to the conclusion that performing craniectomy, just for reducing ICP in children, is associated with high level of morbidity and mortality (13, 15).

In the military setting, wide decompression carries the benefit of reducing malignant brain edema and elevations in ICP in the first several hours after the TBI (2, 7). However, the outcome at severe primary or secondary blast injuries of children varies from adult one. Children have more shearing and diffuse damage than adults. Even the definition of normal ICP and CPP varies with age (4). Therefore, evidence cannot demonstrate precisely whether it affects the outcome beneficially or adversely (16).

Several limitations are raised in the current paper, which would be related to the study design or difficulties of working on traumatic brain injury, including small sample size, lack of the control group, and failure in long-term follow-up. Therefore, the necessity of designing a multi-centered and controlled trial in cases suffering from blast injury is well understood.

Survivors of pediatric blast brain injury had a favorable outcome after decompressive craniectomy in the current paper. Early post-traumatic GCS did not seem to predict the outcome in survivors of blast-related injuries, especially in the absence of major general trauma. Decompressive craniectomy has advantages over other therapies; it has a global action (reduction of ICP and improvement of CPP), is not restricted to a single physiologic pathway, and is potentially associated with fewer systemic side effects. However, there was a limited number of patients, and the results could not be generalized. There was no possibility for a comparative controlled study. Further research in this regard with larger sample size is recommended.