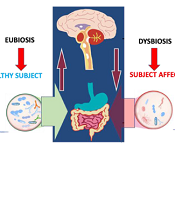 At the beginning of 2020, first COVID-19 cases were reported outside China. SARS-CoV-2 presents a marked inflammatory response, which causes the cytokine storm, a state of self-sustained hyperinflammation that occurs together with a poor immune system (1, 2). At the brain level, neural and immune cells serve as reservoirs for the virus, thereby allowing neurodegenerative development (3, 4). Dysregulated immune responses after infections can persist in what has been called inflammation-immunosuppression syndrome and persistent catabolism. A cytokine storm has been proposed to initiate this specific immunological situation during the acute phases of infectious pictures, similar to what occurs in COVID-19. It results from the continuous release of molecules called molecular patterns, which endanger the damaged organs, causing chronic systemic inflammation and a change in the production of stem cells from the bone marrow toward the myeloid cells. This contributes to the appearance of chronic anemia and lymphopenia. In addition to respiratory distress, subjects suffering from COVID-19 may manifest other symptoms characteristic of infection to the nervous system (vomiting, dizziness, nausea, and frequent headaches) (5-7). The mechanism of entry of the SARS-CoV-2 virus into the nervous system occurs via the peripheral nerves (retrograde axonal transport from the peripheral nerves; hematogenous route and via the olfactory nerve) and by the hematological route (leukocytes-bloodstream or bloodstream-mucosa). The relationship between persistent COVID-19 and neurodegeneration is still unknown. However, the model presented by its predecessor SARS-CoV can be taken as a model, which affects host proteases (endosomal cathepsins, cell surface transmembrane proteases, and furin). These proteases are involved in the pathogenesis of neurodegenerative diseases. In the case of cathepsins, they participate in the degradation of neuronal proteins such as huntingtin and alpha-synuclein. The abnormal degradation of these proteases leads to an elevation and accumulation of them, causing alterations in mitochondrial function, failure in response to the stress of the endoplasmic reticulum and other proteases, and leading to the appearance of neurodegenerative diseases (8-13). The microbiota performs health and disease regulatory functions. The intestinal microbiota presents an enormous diversity, with microorganisms associated with the subject's age (Figure 1).

The representative scheme of intercommunication through the gut-brain axis

It is involved with specific colon activities (carbohydrate fermentation, vitamin synthesis, and xenobiotic metabolism) and acts as a barrier for pathogenic bacteria that invade the gastrointestinal tract. The microbiota alteration may be due to changes in dietary patterns, causing susceptibility to diseases (metabolic syndrome and neurodegenerative disorders). It influences the synthesis of neurotransmitters and neuromodulators, affecting the communication between the intestine, the brain, and the functions cerebral. Signal transduction is complex and can include neural, endocrine, immune, and metabolic pathways. Several studies have proposed the mechanism of infection that SARS-CoV-2 presents through the enterocytes of the small intestine, the depletion of various bacterial species as a consequence of COVID-19 associated with an increase in TNF-α, CXCL10, CCL2, and IL-10, the interaction of bacterial surfaces with viral proteins, and the structural components of commensal bacteria such as gram-negative (lipopolysaccharides) and gram-positive (peptidoglycans) bacteria. The molecule responsible for inhibiting some viral infections is surfactin, a cyclic lipopeptide with virucidal properties (Influenza A, Chikungunya, Ebola, and Zika). An example of the above is the participation of F. prausnitzii, inducing the production of regulatory T cells of the human colon that secrete the anti-inflammatory cytokine IL-10; the high concentration of E. rectole in the intestine is related to the reduction of inflammation in Alzheimer's disease (14-17). Yeoh et al. concluded that alterations in the gut microbiota were associated with immune dysregulation because gut microorganisms were probably involved in modulating host inflammatory responses in COVID-19 (18). The brain has immune cells that protect against infections and injuries that favor the neuronal plasticity process and improve brain connectivity. However, those responsible for the neuroinflammation process can affect the mental state: the microglia (release of pro-inflammatory molecules and amyloid beta-protein) and astrocytes. The emission of the intestinal microbiota modulates the immune system. In return, microbial symbionts control the maturation and function of the immune system (19-21). By way of conclusions, we can say that it is essential to modulate the composition and function of the intestinal microbiota in subjects with persistent COVID through natural products, such as probiotics, as a strategy to promote immune function and thus modulate inflammatory responses. In this regard, we can mention lactic acid bacteria (Lactobacilli, Streptococci, Pediococcus, Enterococcus, Bifidobacteria, and Saccharomyces boulardii). Another possible strategy is the inclusion of flavonoids in the diet since they modulate the signaling pathway of nuclear factor-kappa β (NF-κB) and peripheral-cerebrovascular blood flow, reducing the damage and neuronal loss induced by neurotoxins and neuroinflammation. In addition to the above, antibiotics, such as rifampin and minocycline, can be administered, which have been shown to reduce the levels of beta-amyloid protein in the brain. As a result, these antibiotics reduce inflammation cytokines and avoid changes in the microglia, which can delay depressive symptoms and the emergence of persistent COVID anxiety.