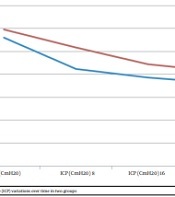 Several studies have examined the possible role of beta-blockers, including esmolol, in controlling intracranial pressure (ICP). This study aimed to evaluate the effect of esmolol on ICP in patients with severe traumatic brain injury.

In this case-control study, all TBI patients with ICP > 20 cmH2O, who were admitted to ICU during the study period, were included. Some patients received standard treatment plus esmolol (500 μg/kg and then 50 mg/kg/min for 24 hours), and some others just received standard treatment with no esmolol. The patients were monitored, and the ICP measurement was performed via inserted intra-ventricular catheter. The ICP and vital signs were measured and recorded before, 8, 16, and 24 hours after starting the treatment in the two groups, and the findings were then compared.

Those patients with TBI who received esmolol as part of their ICP control management in ICU had lower ICP than those who received no esmolol.

Monitoring and controlling intracranial pressure (ICP) is a critical issue in patients with severe traumatic brain injury (TBI), As patients with higher ICP are at higher risk for occurance of sever complications (1-3). In adult patients with ICP > 15 CmH20, the most common symptoms are nausea and vomiting, while symptoms such as decreased consciousness, motor paralysis, papillary edema, hypertension, bradycardia, respiratory depression usually appear in those with ICP > 20 CmH20 (4-7). Brain herniation and death may occur following the complete failure of the compensatory mechanisms and brain autoregulation (1).

Several studies have assessed the possible role of beta-blockers, including propranolol, in patients with a head injury and rising ICP, and their findings documented the significant positive effects of such beta-blockers on the patients’ outcomes (8-11). Esmolol is a short-acting, water-soluble, and selective beta1-adrenergic receptor antagonist drug with a 9-minute half-life. Esmolol is also likely to reduce intracranial pressure in patients with head trauma.

Due to its short half-life, esmolol can be a suitable drug to reduce ICP (12-16); however, this issue has been less investigated. Accordingly, the present study aimed to evaluate the effect of esmolol on ICP in patients with severe TBI.

A case-control study was conducted at the Sina Hospital (Tehran, Iran) from June to November, 2017. The investigators did not interfere with patients' management protocol considered by the in-charge intensivist and just observed the patients and recorded the variables. The proposal of the present study was approved by the Ethics Committee of the Tehran University of Medical Sciences (Code: IR.TUMS.MEDICINE.REC.1396.4641)

All Patients received standard treatment, including intravenous (IV) mannitol, hyperventilation, sedation, and surgical intervention, if needed. According to the in-charge intensivist’s prescription, some patients also received esmolol orphan (manufactured by Orpha-Devel factory in Austria with serial number pl30414/0001) with an initial dose of 500 μg/kg and then 50 mg/kg/min for 24 hours (case group), and some other patients just received standard treatment without esmolol (control group). The patients were fully monitored with standard electrocardiogram (ECG) monitoring, continuous pulse oximetry, invasive blood pressure monitoring through the intra-arterial line, central venous pressure through the intra-jugular line, and ICP measurement via an intraventricular catheter. In the two groups, the ICP, PR, MAP, and SPO2 variations were measured before, 8, 16, and 24 hours after starting the treatment. All data were collected by an intensive care fellowship and recorded in a pre-prepared sheet.

The outcomes were recorded as the length of ICU stay and mortality rates.

Fifty-nine patients with severe TBI were admitted to ICU during the study period, of whom 37 patients were excluded from the study regarding the exclusion criteria. Finally, 22 patients (13 males and 9 females) were included in this study, of whom 12 patients received esmolol, and 10 patients were in the control group. The mean age of those who received esmolol was smaller than those who did not receive it (46.6 ± 18.5 vs. 62.3 ± 19.1 years; P = 0.08).

Table 1 shows the mean values of ICP and vital signs of the patients at various checkpoints. The variations in vital signs over time were not statistically significant between the two groups (P > 0.05); however, the mean of ICP was lower in the esmolol group than the control group at all checkpoints (P < 0.05). Figure 1 also shows ICP variations over time in the two study groups. It should be mentioned that the mean of ICP before starting the management was not significantly different in the two groups (P = 0.141).

Table 1. Mean Values of ICP and Vital Signs of the Patients at Various Checkpoints a 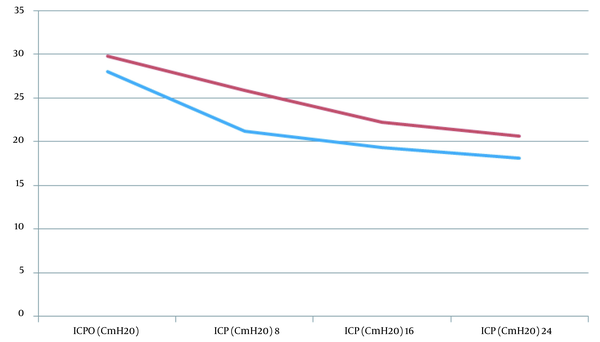 In the present study, the mean of ICP over time was lower in those receiving esmolol than those undergoing the standard treatment without esmolol. Moreover, the ICU length of stay was shorter in the esmolol group than the control group. While, the variations in vital signs, including PR, MAP, and SPO2, was not different over time in the two groups.

The beta-blocker agents have a significant therapeutic effect on reducing blood pressure and intracranial pressure in patients with traumatic brain injuries. In most studies, Propranolol is a competitive β1 and β2 adrenergic receptor blocker, with a 5-10 minute onset of action and a half-life of 2 - 5.5 hours after the IV administration. Such a long half-life raised some concerns regarding its suitablity for managemnet of ICP raising in TBI patients. However, the findings of the present study revealed that esmolol as a short-acting selective beta1-adrenergic receptor blocker with a short half-life (it has about 10-30 minutes' duration of action and 9 minutes' half-life) has significant therapeutic effects on the ICP control in the setting of TBI and is associated with no respiratory and hemodynamic complication. Esmolol was selected to be examined in this study because of the shorter duration of action and the absence of side-effects compared to other beta-blockers.

The small sample size was the main limitation of the present study. This was not an interventional study, and a randomized clinical trial is definitely required to follow this preliminary observational study.

The patients with TBI who received esmolol as part of their ICP control in ICU had lower ICP compared to those not receiving this agent.