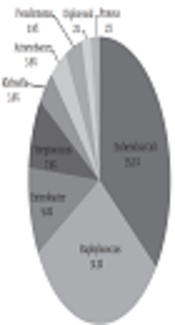 Infection is a common problem in chronically denuded skin, especially in pressure ulcers (PUs). It is one of the main reasons for delayed wound healing, in addition to morbidity and even mortality after spinal cord injury (SCI).

The current study aimed at determining the pathogenic microorganisms, as well as their antimicrobial sensitivity, isolated from active PUs in post-rehabilitated cases with SCI.

The current cross sectional study was conducted from January 2015 to January 2016, on 55 outpatients with traumatic SCI and active stage II, III, and IV PUs in the Brain and Spinal Cord Injury Research Center (BASIR), Tehran, Iran. The largest PU in each case was rinsed with sterile saline and deeply sampled with sterile swabs. The cultures were bacteriologically identified and antibiogram was performed.

The current study population included 55 cases with a mean age of 32.7 ± 11.5 years, of which 87.3% were male. The sacral region was the most common site (n = 31; 56.4%) for PU, followed by trochanteric area (n = 9; 16.4%). The wound swab culture was positive in 51 patients (92.7%). Majority of the bacteria isolated from smaller lesions of stage II and III PUs was Escherichia coli (E. coli) (P = 0.027), while larger lesions with advanced stage were more commonly colonized with Staphylococcus epidermidis (P = 0.0378). Antimicrobial assessment of the isolated microorganisms revealed multidrug resistant E. coli and staphylococci as the prevailing organisms.

Microorganisms invade PUs are multi-drug resistant, and their anti-microbial sensitivity patterns may be quite different from that of normal flora.

Pressure ulcers (PUs) are amongst the most problematic health issues in patients with neurological disability. It prevails in the sacral, ischial, and trochanteric regions depending on the pressure points for the individual case. PUs reduce quality of life and increase health care costs (1, 2). Infection is a common complicating problem in PUs, and of the main reasons for delayed wound healing. All chronic wounds may become contaminated and/or colonized with bacteria (3), likewise these infected wounds may lead to sepsis, prolonged hospital stay, higher costs, and increased mortality rates (4-6).

Unlike other ulcers, systemic antimicrobials are not commonly employed in the management of colonized PUs. Meanwhile, colonizing with pathogenic microorganisms may delay the healing process of these sores, in proportion with severity of infection (7, 8). Empirical treatment for complicated PUs with systemic symptoms before specific prescription may need some clinical clues to guide the physicians, for the most common invading pathogen and their antibacterial sensitivity for specific centers. Identification of pathogenic microorganisms clarifies the necessary antimicrobial activity spectrum for the topical dressings and also systemic empirical antibiotics, in the case of secondary inadvertent bacteremia, osteomyelitis, and sepsis.

The current study aimed at determining the pathogenic microorganisms and their antimicrobial sensitivity patterns, in active stage II, III, and IV PUs of patients with spinal cord injury (SCI) presenting to the studied referral clinic. Culture and sensitivity of PUs were performed for the following reasons:

1- To know the type of bacteria in the wound in case the patient becomes septic secondary to heavy colonization and the result helps to choose anti-bacterial agent.

2- If a flap surgery is planned, it is necessary to know the proper antibiotics to be given as a pre-op or post-op medication.

3- To demonstrate if these wounds are contaminated with a resistant organism that needs patient isolation according to infection control rules.

The current cross sectional study was conducted in the Brain and Spinal Cord Injury Research Center (BASIR), Tehran, Iran on patients with traumatic SCI. The patients with at least one actively denuded PU, with 1 - 15 cm diameter, lasting for at least four weeks, were enrolled in the study. The study protocol was approved by local institutional Ethics Committee of Tehran University of Medical Sciences, and informed consent was obtained from all the participants. The patients with uncontrolled diabetes mellitus were excluded from the study. All of the patients underwent adequate spinal cord decompression and fixation in the acute trauma setting and were mobilized with wheelchair and assistive devices. From January 2015 to January 2016 amongst the 266 referred patients with SCI, 76 subjects had PUs. Fifty-eight cases with active stage II, III, and IV PUs were enrolled in the study. At the same time, 18 cases with stage I PUs or underlying medical problems were excluded. Also, three cases were excluded due to not providing informed consent for the study and/or taking topical antiseptics within the last three weeks. Finally, 55 eligible cases were enrolled in the study. In each case, one pressure sore (the largest) was studied. Also, the sphincter management status was evaluated with spinal cord independence measure III (SCIM III) scoring system (0 - 100) (sphincter management subscales, for bowel (0 - 10) and bladder management (0 - 15)) by a clinician and the data were recorded.

After rinsing the central surface of the wound with sterile saline, the wound bed was deeply sampled with sterile swabs under aseptic conditions. The samples were preserved in Stuart transport medium, for Gram staining and bacterial culture. Then, the samples were cultured on blood agar, chocolate agar, and eosin methylene blue (EMB) agar and incubated for three days. The swabs were also incubated in thioglycolate medium, and in the case of discoloration, they were cultured again on the aforementioned media. The bacterial culture was conducted in a semi-quantitative manner. The microorganisms were identified according to CLSI (the Clinical and Laboratory Standards Institute) guidelines.

The Kruskal-Wallis and Mann-Whitney non-parametric U tests were employed to assess the correlation of bacterial type and PU stage. PU size, stage, and location were assessed with one-way analysis of variance (ANOVA) followed by Bonferroni t test. P value < 0.05 was the level of significance.

Table 1. Demographic and Pressure Ulcer Characteristics of the Studied Patients

Wound culture was positive in 51 patients (92.3%). The most common isolated microorganism was Escherichia coli (E. coli) (35.3%) followed by Staphylococcus spp. (31.3%) (Figure 1). The spectrum of bacterial culture is shown in Table 2.

Table 2. Bacterial Culture Results of the Infected Pressure Ulcers in the Studied Patients Total bacteria identified in pressure ulcers in patients with SCI

There was no case with mixed culture result. There was a higher incidence of E. coli colonization in smaller PUs (P = 0.027), while other microorganisms did not show a size affinity (Table 3). Also, stage III and IV ulcers were more commonly contaminated with Staphylococcus epidermidis (P = 0.0378) (Table 3). Sacral and trochanteric sores were more commonly colonized with E. coli (P = 0.002 and P = 0.000, respectively) (Table 4).

Table 3. Comparison of the Culture Results of Enteric and Gram-Positive Bacteria Based on Ulcer Size and Stage (N = 51)

Table 4. Comparison of Different Locations of Pressure Ulcer According to the Infected Bacteria (N = 51)

One of the challenges of SCI management is the prevention and management of PUs. Some cases are more prone to PU development due to more PU risk factors (9, 10). In Iran, the prevalence of traumatic SCI in Tehran Province is estimated 2.36 per 10,000 population (11). A 34.6% prevalence for PU is estimated in SCI cases in Iran (11); in the current study, the rate was 21.8% (n = 58). This discrepancy may be due to selection of rehabilitated cases in the current study patients.

The sampling methods included needle aspiration, surgical drainage, cotton swab, or tissue biopsy techniques (12). Although tissue biopsy is considered as the gold standard to isolate the bacteria, nevertheless it is a relatively invasive method. Tissue biopsy was not used for sampling in the current study due to concerns over deepening the wound, and/or introducing additional contaminants into the wound, in addition to the necessity of skills and/or extra supplies to perform the procedure. Therefore, performing routine quantitative wound biopsies in clinical practice is not recommended, due to cost, time, potential sampling error, and risk of introducing infection. Semi-quantitative surface wound swabs are correlated well with deep tissue quantitative counts (3) and are cost effective, noninvasive, and adequate for bacterial identification in most cases (5).

Normal skin flora may become pathogenic in the subjects with PU, due to impaired tissue perfusion and epithelial protection. Also, remote bacteria and other microorganisms may become superimposed on the wound (13-15). In the earlier studies, Proteus mirabilis were the most frequently isolated bacteria, but there was a trend to increasingly identify the predominance of Staphylococcus aureus from bacterial cultures in later studies. Recently, the most common identified genus is Staphylococcus (23% of all genera identified) followed by Proteus (14% of all genera identified) (12). In the current study Staphylococcus was also among the common genera (31.3%), while Proteus was rarely (2%) isolated.

In the current study, both pathogenic microorganisms and normal skin flora were isolated from the discharging wound. E. coli were the most frequently isolated microorganisms. Thus, it appears that the predominant organisms identified in PUs are highly variable, and largely dependent upon the study population (12). There was also a significant correlation between small wound size and E. coli infection. Also, large sores were more common on the sacral region near the anus. E. coli cystitis are also frequently reported in patients with SCI (16, 17), which may be a result of infected perineal skin. Resident bacterial flora may account for the predominance of Enterobacter in chronic PU of individuals with SCI (12). In the current study, the prevalence of Enterobacter was 9.8%. Individuals with SCI are more likely to be colonized with Gram-negative bacteria as part of their normal flora in comparison with individuals without SCI. Factors that may influence Gram-negative bacteria colonization of the perineum include the presence of neurogenic bladder dysfunction, external condom catheter use, changes in skin pH, and bacteriuria (12). Gram-negative rods were 58.8% in the current study. The most common site of PU in the current study patients was the sacral region, in contrast to other reports about ischial tuberosity as the most frequent site (6, 7). This may be due to more common recumbent positions in the current study cases. Mixed infection was rare among the study samples, which was in contrast to the results of the study by Heym et al. (7) reporting 21% of triple bacterial species in tissue samples, but multiple organisms were very rare in liquid drainage cultures in the current study.

Staphylococcus spp., a significant nosocomial superinfection, may also colonize PUs due to multiple hospital admissions, with a nosocomial source as in the current study cases. The cultured microorganisms were commonly sensitive to vancomycin and resistant to penicillin, oxacillin, and trimethoprim-sulfamethoxazole. Superinfection of PUs with Proteus and Klebsiella spp., may increase the risk of sepsis in patients with SCI (6). According to the current study results, patients with bowel incontinence were at higher risk for PU infection with E. coli. Microorganisms isolated in the current study were frequently sensitive to imipenem and resistant to trimethoprim-sulfamethoxazole (Table 5), in concordance with other reports from tertiary spine centers (18). The current study findings may change the clinical approach to chronic wounds concerning appropriateness of the employed topical anti-microbial agents and/or systemic or local antibiotic therapy, if an indication is available (12).

It may be concluded that microorganisms cause infection in PUs are multi-drug resistant, and their anti-microbial sensitivity and resistance may be different from those of normal flora. Swab culture may be a good alternative for tissue biopsy as a sampling method for the scrutiny of bacterial flora. Due to the heavy colonization of PUs with multiflora and to prevent systemic sepsis, it is important to keep the wound clean as much as possible by frequent dressing per day with anti- bacterial agents. It helps to reduce the risk of colonization and secondary infections in PUs.

Authors wish to thank the patients with SCI that participated in the study and cooperated with them.

Copyright © 2019, Archives of Neuroscience. This is an open-access article distributed under the terms of the Creative Commons Attribution-NonCommercial 4.0 International License (http://creativecommons.org/licenses/by-nc/4.0/) which permits copy and redistribute the material just in noncommercial usages, provided the original work is properly cited.
download pdf 138.94 KB Peer Review Comments ( 106.10 KB) Get Permission (article level) Import into EndNote Import into BibTex
Number of Comments: 0