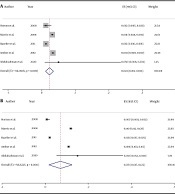 Glaucoma and Cataract in Multiple Sclerosis

Multiple Sclerosis (MS) is a chronic inflammatory disorder characterized by gradual central nervous system demyelination and subsequent degeneration (1). Several ophthalmological manifestations, such as uveitis, ocular motor involvement, nystagmus, and optic neuritis, have been reported due to MS. Moreover, other ophthalmological disorders, such as glaucoma and cataract, have been investigated in MS patients, and different prevalence rates were reported (2, 3).

Glaucoma is a type of optic neuropathy that leads to the degeneration of retinal nerve fibers and irreversible visual loss. The global prevalence of glaucoma has been estimated to be 3.5% in people aged 40-80 years (4). The risk of glaucoma may increase in MS patients due to reduced macular thickness in these people (5). A cataract is a significant cause of visual impairment worldwide, characterized by the opacification of the crystalline intraocular lens. Cataract has been reported in 2.5% of people aged 40 - 49 and 6.8% of those aged 50 - 59 years in the USA (6). Similar to glaucoma, the risk of cataract may augment in patients with MS as a result of glucocorticoid use or shared disease mechanisms (7).

Previous studies had controversial results regarding the prevalence of glaucoma and cataract in MS cases. Therefore, we aimed to perform a systematic review and meta-analysis to investigate the prevalence of glaucoma and cataract in patients with MS. The study was conducted according to the PRISMA statement. We searched PubMed, Scopus, Embase, and Web of Science in October 2021. Original studies (except case reports) which reported cataract or glaucoma in MS cases without any other comorbidities were considered eligible. Two independent investigators performed article selection and data extraction, and a third researcher was consulted in case of disagreements. Study characteristics, sample size, mean age, number of MS cases, glaucoma and cataract, and definition of disorders were extracted from the included studies. The mean point of glaucoma and cataract prevalence was measured using the random-effect model with a 95% confidence interval (CI) by the Stata 11.0 (College Station, TX). I-squared (I2) statistics were used to evaluate heterogeneity among the included studies. 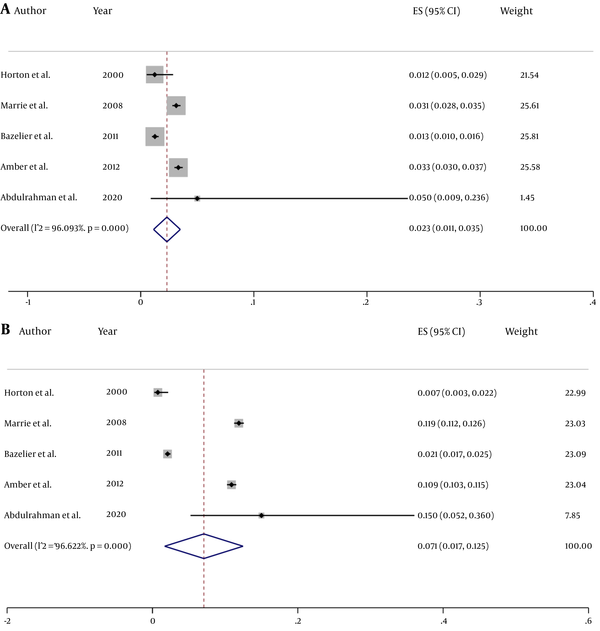 Prevalence of glaucoma (A) and cataract (B) in MS cases

The risk of cataract in patients with MS seems to be higher based on our findings (7.1%). In addition, epidemiological studies on the general population reported that cataract affects 2.5% of those aged 40 - 49 and 6.8% of those aged 50 - 59 years in the USA (6). However, the prevalence of glaucoma in patients with MS was lower than the previously reported results (3.55%) in the general population of North America (4). Research by Bazelier et al. revealed that the risk of cataract and glaucoma increases in MS cases younger than 50 years compared to healthy individuals (2). In their study, the prevalence of cataract and glaucoma was almost similar between people with MS and controls, while after adjusting for covariates, they found a higher risk in MS cases.

The shared mechanism between MS and cataract may be explained by calpains (proteolytic enzymes) which are active in the lens and also rise in MS relapses. The overactivation of calpains is thought to cause lens degeneration and cytoskeleton changes (8). The use of GC in patients with MS can be another explanation for the increased risk of cataract based on previous studies (9).

Retinal nerve fiber layer loss is observed in MS and glaucoma (10). However, there is no clear pathophysiological link between these two disorders. Moreover, as we discussed, comparing our results to epidemiological studies revealed no elevated risk of glaucoma in patients with MS. However, further studies are necessary to confirm our findings.

In summary, the risk of cataract seems to be higher in MS cases (7.1%) compared to global prevalence, highlighting the importance of considering cataract development in patients with MS. Furthermore, based on our findings, the prevalence of glaucoma is 2.3% which is even lower than the global prevalence (3.5%). However, our data were limited, and further studies are necessary to investigate the risk of cataract and glaucoma in patients with MS to confirm our findings.

Copyright © 2022, Author(s). This is an open-access article distributed under the terms of the Creative Commons Attribution-NonCommercial 4.0 International License (http://creativecommons.org/licenses/by-nc/4.0/) which permits copy and redistribute the material just in noncommercial usages, provided the original work is properly cited.
download pdf 560.07 KB Get Permission (article level) Import into EndNote Import into BibTex
Number of Comments: 0