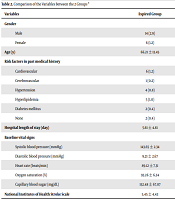 The disease burden of acute ischemic stroke (AIS) is an important health issue in today’s patient care. Urgent intravenous thrombolytic (UIT) therapy is one of the most popular treatments in these cases.

This study aimed to evaluate the 1-month outcome of patients with AIS who received urgent intravenous fibrinolytic therapy.

In a prospective cross-sectional study, we evaluated the 1-month outcome of cases with a confirmed diagnosis of AIS who had received UIT therapy at the emergency department. Demographic data, mortality and morbidity, hospital length of stay, admission functional disability by Modified Rankin Scale (MRS), National Institutes of Health Stroke Scale (NIHSS), and final disposition of patients were all evaluated and recorded via their medical records or structured telephone inquiries. We compared all variables between the 2 groups (i.e., survived and expired groups).

NIHSS and MRS scores were significantly higher in the expired cases. The 1-month mortality rate in this study was 4.08%.

Stroke (with a reported mortality rate of 12%) is well known to be the third leading cause of death and the most common cause of disability around the world (1). The 1-month case fatality rate is estimated to range from 16% to 32% (2). In two-thirds of survivors, stroke’s functional disabilities definitely affect their quality of life (3-5). Urgent intravenous thrombolysis (UIT) is accounted as an important treatment for clinical improvement in acute ischemic stroke (AIS) (6, 7).

Many studies have reported different controversial outcome rates in AIS after the administration of UIT. Shorter door-to-needle time, the absence of underlying diseases, milder stroke and smaller involved territory, younger age, and normoglycemia are considered among the most influential factors (2, 8). It is revealed that the age and functional status of the patient at discharge (9, 10) and stroke subtype (11) can be significant predictors of mortality.

Nowadays, UIT administration in appropriate patient populations has been motivated worldwide. In Iran, the reported incidence of ischemic stroke has been raised to approximately 100/100 000 population over the years (12, 13). After the initiation of the Telestroke activation service, the use of UIT has also increased in most stroke management centers. Most previous studies have assessed the long-term outcome of AIS cases. There is also little research performed in Iran evaluating the AIS outcome after UIT. Limited studies conclude the case fatality rate of ischemic stroke in Iran to be 14% - 26% (12-15).

In this study, we decided to study the short-term outcome of these cases in a referral center.

In this prospective cross-sectional study, we enrolled patients with AIS diagnosis who had undergone UIT in the emergency department (ED) during a 2-year interval from 2018 to 2019 in Dr. Shariati Hospital (a tertiary referral center) in Tehran, Iran. The sampling method was enrolling all available cases. AIS diagnosis was based on the initial clinical presentations, brain computed tomography (CT), or brain magnetic resonance imaging (MRI) on the admission day in ED. Neurology specialists confirmed diagnosis, investigated for indications and contraindications to receive UIT, and finally determined the most appropriate candidates.

In Iran, an emergency medical service (if it is called) announces an ischemic stroke at the scene and activates a special coding system via the Telestroke activation service to the destination hospital. The patient is quickly transferred to a well-equipped hospital for stroke management.

The exclusion criteria were patient unwillingness to participate in our study, lack of access to his/her medical data, and lost to follow-up.

This study was approved by the Ethics Committee of Tehran University of Medical Sciences (IR.TUMS.MEDICINE.REC.1399.049). Informed written consent was obtained from all participants to share their data.

Data were analyzed using SPSS version 23 (SPSS Inc, Chicago, Ill, USA). We determined normality with the Kolmogorov-Smirnov test. Descriptive indices, such as frequency (percentage) and mean (SD), were used to express the results. The Fisher exact test, independent t test, or nonparametric test (Mann-Whitney U test) were used as required. Logistic regression was used to evaluate the association of variables with the final outcome. The level of significance was 0.05. We enrolled patients who met our inclusion criteria from 2018 to 2019.

Table 1. Basic Data of the Study General Population a

The 1-month mortality rate in this study was 4.08%, and none of the cases expired during admission. After comparing studied variables in the expired and survived groups, we found that most variables had no statistically significant difference between the 2 groups, except for NIHSS and MRS scores (P = 0.005 and P = 0.001, respectively). Table 2 shows the main comparisons between all study variables between the 2 groups.

Table 2. Comparison of the Variables Between the 2 Groups a

In the present study, all evaluated AIS cases received UIT in ED. Most cases were males (74.3%) and older than 65 years old (78.9%). Past medical history was positive in the majority of cases, especially cardiovascular and cerebrovascular conditions (almost 50%). Chen et al (2013) evaluated both young and old age stroke cases (all types). In the > 65 years old group, the mean ± SD of age was 75.8 ± 7.1 years old. Most cases were males (50.6%) and had underlying diseases (16).

We observed a mortality rate of 4.08% in this study. Some report in Iran indicates that the 28-day case fatality rate in all stroke types is around 19% - 31% (17). As investigated in Iran, stroke is slightly more common in females, and the mean age of stroke is within the seventh decade of life (12, 13). Hypertension is found to be the most common risk factor both in ischemic and nonischemic stroke (12, 13). The case fatality rate in ischemic stroke is reported to be 14% - 26% (12-15). Our study shows that by UIT treatment, we may be able to reduce this mortality.

SariAslani et al. evaluated 217 patients with AIS who had undergone UIT in a prospective study. The mean ± SD of age was 66.40 ± 13.37 years, and most cases were males (55.3%). Hypertension was the most prevalent risk factor among all patients. Compared to our findings, the hospital length of stay was longer in this research (13.25 ± 13.48 days). The mortality rate was higher (21.7%). They also did not find any significant correlations between the stroke outcome and study variables. Their results only determined that cases with blood sugar lower than 144 had a better 3-month outcome. Based on their conclusion, age over 60 years old and admission NIHSS more than 12 were the only significant risk factors for death (18). In contrast to our conclusion, age was not a significant risk factor, while an NIHSS score of more than 10 was significant in mortality.

Albers et al. showed a 1-month mortality rate of 13% among patients with AIS undergoing UIT. Further, 35% of their evaluated cases considerably improved with MRS less than 1, and 43% were independent with MRS scores less than 2. In the meantime, admission NIHSS more than 10 showed less improvement (21).

According to the previous research in the literature and especially the existed data in Iran, we tried to overcome their limitations in our study; thus, we assessed the short-term outcome of a large sample of AIS patients who underwent UIT in a prospective design. The study endpoints emphasized that UIT in AIS could decline the mortality rate. NIHSS score > 10 and MRS score > 3 may be associated with a worse prognosis.

One limitation of this study was difficulties in gathering follow-up data. Some patients or their guardians had problems recalling information. We could not evaluate NIHSS and MRS scores after discharge.

The mortality rate was estimated to be 4.08% in this study, lower than what previously was reported in AIS without UIT treatment. NIHSS and MRS scores were significantly related to poorer outcomes.

Copyright © 2022, Author(s). This is an open-access article distributed under the terms of the Creative Commons Attribution-NonCommercial 4.0 International License (http://creativecommons.org/licenses/by-nc/4.0/) which permits copy and redistribute the material just in noncommercial usages, provided the original work is properly cited.
download pdf 118.42 KB Get Permission (article level) Import into EndNote Import into BibTex
Number of Comments: 0