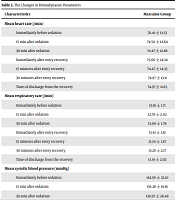 We decided to compare the effects of intracameral Marcaine and lidocaine on pain intensity after the cataract operation.

In this double-blind, randomized clinical trial, 64 patients who were candidates for cataract surgery were randomly assigned to either anesthesia with lidocaine or bupivacaine (Marcaine) by intracameral injection. Study endpoints included pain score, hemodynamic status, patient satisfaction, and recovery duration.

The Marcaine group experienced a shorter recovery than another group (P = 0.001). The mean pain score at the different time points after the operation was significantly lower in the group receiving Marcaine than those receiving lidocaine (P < 0.001). Our study showed a higher level of patients’ satisfaction with Marcaine as compared to the lidocaine group (P = 0.026). However, postoperative hemodynamic status was similar in both groups.

About half of all blindness in the world is caused by cataracts. The most important risk factors for this disease are aging, smoking, ultraviolet ray exposure, obesity, and diabetes (1, 2). The main treatment for cataracts is surgery, and in this regard, various anesthesia techniques have been introduced, such as general anesthesia and ophthalmic anesthesia (intracerebral, retroorbital, and peri-orbital), and local anesthesia (2, 3). More than 60% of eye surgeons in the United States prefer local anesthesia (4). While the surgeon's performance is important, the patient's comfort and satisfaction should also be considered when selecting an anesthesia method. Preoperative anxiety and postoperative pain and discomfort are among the factors that affect patient satisfaction (5). In the intracameral method, anesthetics such as lidocaine or bupivacaine (Marcaine) are injected into the anterior chamber. Based on the studies conducted in this field so far, local and intracerebral anesthesia methods have been reported to have the lowest complication rates compared to retrobulbar and peribulbar anesthesia methods (6, 7). In retrobulbar and peribulbar anesthesia, complications such as retrobulbar hemorrhage, globular rupture, and optic nerve injury have been reported (8). Additionally, the mean time of surgery was lower with local and intracameral anesthesia methods (9). So far, limited studies have been performed comparing the analgesic effect of different anesthesia methods. Most of these studies have focused on patients' comfort during surgery, and less attention has been paid to the pain that patients experience after surgery. Because during the operation, patients receive intravenous sedatives such as fentanyl, midazolam, or ketamine, and these drugs themselves undoubtedly increase patients' tolerance (10). Consequently, it is important to pay attention to the intensity of pain and discomfort experienced by patients after the recovery period has ended, which is almost simultaneous with the reduction in the effect of sedatives (11).

Since evaluating patient satisfaction with the anesthesia method used is the best way to improve the quality of anesthesia and preoperative care, and there is a lack of studies that compare the effects of intracameral injections of Marcaine and lidocaine on postoperative pain and recovery after cataract surgery, especially in our health centers, this study aimed to compare these effects.

The present clinical trial was performed on patients considered for elective cataract surgery and hospitalized at Feyz Hospital in 2022.

Participants were 20 to 70 years old and had ASA class one to two, and they were willing to participate in the study. There were the following exclusion criteria: drug addiction (due to the change in pain threshold in these individuals), taking painkillers in the last 24 hours, proven anxiety or other psychiatric problems, body mass index greater than 35 kg/m2, and mental disability. Considering the 95% confidence interval and calculation power of 0.84, according to a similar study, the standard deviations of sedation scores were S1 = 0.7 and S2 = 1.2, and the mean difference was 0.7. Accordingly, the sample size for each group was 32 individuals.

Before the operation began, the patients were randomly divided into two groups based on a computer-generated sequence. The patients and the data collectors were blind to the grouping of patients.

After obtaining permission from the Medical University Ethics Committee and completing the informed consent form, the eligible patients were selected by convenience sampling method and assigned to two groups by block randomization techniques as the group anesthetized with lidocaine by intracameral injection and the group scheduling for anesthesia with bupivacaine (Marcaine) by intracameral injection. Every patient underwent the same type of surgery and was operated on by the same surgeon. This study focused on phacoemulsification cataract surgery with intraocular lens implantation. Local anesthesia was performed in both groups as follows: A drop of 0.5% Tetracaine was used every 5 minutes from 20 minutes before the start of surgery. 0.2 cc of lidocaine 1% was injected into the anterior chamber without preservative immediately after corneal incision and before capsulorhexis (in the first group), and 0.2 cc of half percent Marcaine without preservative diluted in a ratio of one to one with sterile BSS solution was injected into the anterior chamber (in the second group) without preservative. After the patients were placed on the operating table, 0.03 mg/kg midazolam and 1.5 μg/kg intravenous fentanyl were injected as titration for sedation. If the Patient's Sedation Score was not favorable, the dose of midazolam was repeated to place the Ramsey Sedation Score between 3 and 4. During recovery, if the Pain Score was higher than 3, pethidine was administered intravenously at the dose of 0.4 mg/kg and repeated if necessary to relieve the patient's pain.

Hemodynamic variables including mean arterial blood pressure (MAP), heart rate (HR), and arterial blood oxygen saturation (SPO2) just before induction of anesthesia, 15 and 30 minutes during surgery, at the onset of recovery, 15 and 30 minutes later and at the time of discharge from recovery (based on the Modified Aldrete scoring system) were assessed and recorded. The patient's pain intensity was measured and recorded at the time of entry into recovery, 15 minutes and half an hour later, and at the time of discharge from recovery. Recovery time was measured and recorded based on the Modified Aldrete Score table. Also, the level of satisfaction after full consciousness at the end of recovery was recorded and evaluated as completely satisfied, satisfied, dissatisfied, and completely dissatisfied. The total dose of the additional analgesic drug was also evaluated. The duration of surgery, from the time of surgical incision to the time of dressing, was also determined. The incidence of adverse events after surgery, including cardiac arrhythmia, bradycardia (sudden decrease in heart rate below 60 beats per minute), and tachycardia (sudden increase in heart rate above 100 beats per minute) as well as nausea and vomiting after surgery and other possible complications were recorded.

Results of quantitative parameters were shown as mean ± standard deviation (SD) and were summarized by frequency (percentage) for categorical parameters. t-test or Mann-Whitney test was used for continuous variables whenever the data did not appear to have normal distribution or when the assumption of equal variances was violated across the groups. The categorical parameters were compared using the chi-square or Fisher’s exact test whenever needed. The trend of the changes in variables was assessed by the Repeated Measure ANOVA test. P values less than or equal to five-hundredths were considered significant. For the statistical analysis, version 23 SPSS was used. This study is approved under the ethical approval code of IR.MUI.MED.REC.1400.355 Approval date: 2021-08-01 (link: ethics.research.ac.ir/ProposalCertificateEn.php?id=208913) and clinical trial code: IRCT20210902052364N1 (link: en.irct.ir/trial/58508)

In the present study, 64 candidates for elective cataract surgery were randomly injected with Marcaine or lidocaine. As shown in Table 1, the demographic characteristics of the two groups and surgery time and need for midazolam or opioid injection were not significantly different with each other . In the two groups receiving Marcaine and lidocaine, minor side effects were 3.1% and 6.2%, respectively, with no significant difference (P = 0.999). Some complications occurred in the both groups, including nausea and vomiting in one patient in each group. The mean recovery time in the Marcaine and lidocaine groups was 43.75 ± 17.32 min and 59.69 ± 18.96 min, respectively, indicating a shorter recovery in the former group (P = 0.001).

Regarding pain intensity following surgery, as indicated in Table 2, the mean pain score at the different time points after the operation was significantly lower in the group receiving Marcaine than those receiving lidocaine (P < 0.001). As far as additional opioid drug dosage was concerned, there was no difference between the two groups.

Table 2. The Mean Pain Score at the Different Time Points After Operation

Concerning the changes in hemodynamic indices (Table 3), at the different times of assessments after surgery, no differences were revealed in mean values of heart rate, respiratory rate, systolic and diastolic blood pressures, and arterial oxygen saturation. There was no significant difference in the trend of changes in the pointed hemodynamic parameters between the two interventional groups. Regarding patients’ satisfaction of operation in the groups receiving Marcaine and lidocaine, complete satisfaction was reported in 56.2% and 34.4%, partial satisfaction in 40.6% and 46.9%, and partial dissatisfaction in 40.6% and 46.9%, respectively, indicating greater satisfaction in the former group (P = 0.026).

Table 3. The Changes in Hemodynamic Parameters

In spite of the high success rate of surgical procedures in patients with cataracts, they complain of local pain after surgery, which is often accompanied by a negative impact on their quality of life due to the fatal length of this complication. Today, a variety of topical (intracameral) analgesics are used as sedatives to relieve pain after this surgery. In this regard, drugs such as lidocaine and the compounds bupivacaine (Marcaine) or ropivacaine are the most popular. However, there is still no general consensus on which drug or method is better. In the present study, we evaluated the efficacy and safety of lidocaine and Marcaine on reducing pain after cataract surgery. In this regard, the outcomes examined included pain score based on the VAS system, hemodynamic changes, such as mean systolic and diastolic blood pressure, heart rate, respiration rate and arterial oxygen saturation of hemoglobin, cases of extra midazolam or narcotics, and patient satisfaction.

The study findings can be summarized as follows: (1) hemodynamic changes were not significantly different between the two groups; (2) the amount of pain reduction in the Marcaine group was higher than in the lidocaine group; (3) the length of stay of patients injected with Marcaine was significantly shorter than that of the lidocaine group; (4) the level of patient satisfaction in the group injected with Marcaine was significantly higher than the group receiving lidocaine; and (5) minor side effects were not different between the two groups. In terms of treating pain after surgery, injections of Marcaine would be much more effective than those of lidocaine, although both drugs are free from serious side effects. The intracameral injection of Marcaine is therefore preferred over the injection of lidocaine. However, as mentioned earlier, surgery pain can persist for several weeks after surgery, and a short period was considered as a follow-up period in this study (until discharge from recovery); therefore, a longer follow-up period will be necessary to evaluate the effectiveness of these two drugs in relieving surgical pain.

The most important limitation of the present study was the small sample size and, therefore, the small study power that could affect the results of the study. Also, the short follow-up period leaves the long-term effectiveness of these drugs in relieving pain unanswered, and therefore, to achieve more accurate results, it is recommended to use a larger sample volume and longer follow-up duration.

In conclusion, comparing the sedation of lidocaine and Marcaine as intracameral injection will indicate much more analgesia, a shorter stay duration, and more patient satisfaction after receiving Marcaine than lidocaine.

Copyright © 2022, Author(s). This is an open-access article distributed under the terms of the Creative Commons Attribution-NonCommercial 4.0 International License (http://creativecommons.org/licenses/by-nc/4.0/) which permits copy and redistribute the material just in noncommercial usages, provided the original work is properly cited.
download pdf 119.68 KB Get Permission (article level) Import into EndNote Import into BibTex
Number of Comments: 0