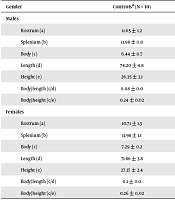 This study was conducted to determine the morphometric alterations of the corpus callosum in stroke patients using MRI in northern Iran.

This case-control study was carried out on 40 right-handed men and women referring to an MRI center in Gorgan city, North of Iran. The subjects were divided into case and control groups. The case group included 20 male and female patients with stroke and the control group comprised 20 healthy people with no neurological signs and intracranial lesions on MRI. The widths of the rostrum, body, and splenium, the anterior to posterior length, and the maximum height of the corpus callosum were measured for each subject. The ratios of the body to length and body to the height of the corpus callosum were also calculated. Student’s unpaired t-test and regression analysis were used for data analysis at the significance level of 95%.

This study showed that stroke reduces morphometric indices of the corpus callosum, particularly in the splenium of men.

Several studies have shown that leukoaraiosis (14), subcortical ischemic vascular dementia (15), cerebral microangiopathy (16), leukoaraiosis and disability (17), lacunar stroke (14), and carotid artery stenosis (18) can cause morphometric alterations in the corpus callosum. There is no documented report of the corpus callosum dimensions in stroke patients in Iran.

This study was conducted to evaluate the corpus callosum dimensions in Iranian stroke patients compared to a healthy Iranian population.

This case-control study was carried out on 40 right-handed men and women referring to an MRI center in Gorgan city in northern Iran in 2013. The age range of the participants in both case and control groups was 50 - 70 years. Consent forms were signed by all the participants according to the Ethics Committee guidelines.

The participants were divided into case and control groups. The case group included 10 male and 10 female patients with stroke. Stroke is the most rapid neurologic deficit cause by the occlusion of vessels, on extravasation of blood into parenchyma and the neurologic deficit lasts for more than 24 hours. There are various subtypes of deficit, such as less than 24 hours on more than 1 day which makes an obvious neurologic deficit. There are various subtypes of a stroke, some of which are subtle and may last less than one day or create no obvious neurological deficits. In this study, we included patients with obvious neurologic deficits (sensory, motor, visual, etc.) who transferred to the emergency department by their families or pre-hospital medical care staff. The patients experienced a stroke for the first time. The interval from symptom onset to admission was 1 - 3 days. Moreover, the interval from the clinical diagnosis onset to MRI was at least 7 days. We also included 20 subjects in the control group (10 men and 10 women) who had a headache with normal MRI and no specific signs and symptoms.

Table 1. Morphometric Characteristics of the Corpus Callosum in Control Subjects and Ischemic Patients

aValues are expressed as mean ± SD in mm.

Table 2. Morphometric Characteristics of the Corpus Callosum in Controls and Stroke Patients According to Gender

aValues are expressed as mean ± SD in mm.

Table 3. Odds Ratios of Morphometric Characteristics of the Corpus Callosum in Controls and Stroke Patientsa, b

Yamauchi et al. study using T2-weighted MRI showed diffuse high-intensity areas in the white matter of the brain hemispheres of patients. Indeed, the callosal area had a significantly smaller size in stroke patients (14). Wittstock et al. study indicated that the callosal function was affected by age-associated cerebral microangiopathy. In addition, they stated that chronic demyelination of callosal fibers may happen in cerebral microangiopathy (16).

Based on Wu et al. study using fractional anisotropy, the thicknesses of the genu, the anterior third, middle, and posterior third of the body of the corpus callosum, and the splenium of the corpus callosum had smaller sizes in subcortical ischemic vascular dementia patients than in normal subjects. Moreover, they showed lower fractional anisotropy values of the genu and splenium of the corpus callosum in subcortical ischemic vascular dementia patients (15). Cortical reorganization and motor outcome are affected by subcortical stroke through the degeneration of transcallosal fibers connecting sensorimotor regions of the two brain hemispheres (19). Indeed, according to Yamauchi et al. findings, the size of the corpus callosum and age of subjects are significant independent predictors of the scores of the mini-mental state examination in patients with white matter high-intensity lesions (5). Yamauchi et al. study in 2000 reported that cortical neuronal damage in large cerebral arterial occlusive diseases can cause the atrophy of corpus callosum with a reduction in cortical benzodiazepine receptor binding (20).

This study showed that stroke reduces the morphometric indices of the corpus callosum, particularly in the splenium of men.