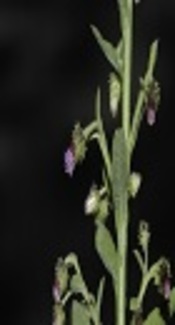 Laggera aurita belongs to the Asteraceae family; it is an annual herb found growing as weeds in Sub-Saharan Africa, including Nigeria. In Nigeria, Laggera aurita is used as a remedy for paediatric malaria and in the management of epilepsy. Previous studies on extracts of this plant suggested its anticonvulsant activity via GABA-mediated neurotransmission. Therefore, this study aimed at evaluating anxiolytic-like effect of the plant extract.

The results of this study revealed that the leaf extract of Laggera aurita possesses anxiolytic-like properties.

Laggera aurita Linn (Asteraceae) is native to Sub-Saharan Africa and is a herbaceous plant found growing as a weed in Nigeria (8). Essential oils from the plant of L. aurita are used for the treatment of different diseases, such as cancer, atherosclerosis, and thrombosis (9). Anticonvulsant activity (10), anti-inflammatory and analgesic activity (11), antiviral, antibacterial and hepatoprotective properties (12), and antinociceptive properties (13), have been reported by previous studies. The traditional use of the plant in epilepsy (10) and paediatric malaria have also been reported (14). This study aimed at establishing the anxiolytic property of methanol leaf extract of Laggera aurita (LAME).

The leaves of Laggera aurita Lam were collected in March 2017, from Kakiyaye village, Zaria, Nigeria. The plant was identified by Mallam Baha’uddeen of the herbarium unit, department of plant biology, Bayero University Kano. A voucher specimen number (BUKHAN 0138) was collected for future reference. The sample was washed, dried under shade, pound using mortar, and pestle into coarse powder. A portion (1250 g) of the powdered leaves was cold-macerated in methanol (2.5 Litres) for 5 days. The solvent was decanted in an evaporating dish and evaporated to dryness over a water bath, maintained at about 40°C. The dried methanol leaf extract of Laggera aurita was stored in an air-tight container. The solutions of the extract were always freshly prepared for each study by dissolution of the appropriate amount required in distilled water.

Adult Swiss albino mice of both genders (16 to 22 g) were obtained from the department of pharmacology, Bayero University, Kano, Nigeria. They were maintained under standard experimental conditions with access to animal feeds (Excel Feeds Plc, Kaduna, Nigeria) and water. All experiments performed were in accordance with the Bayero University research policy guidelines on use and care of animals.

Mice were randomly grouped to 5 groups of 6 mice each. Group 1 served as the control group and was treated with distilled water (10 mL/kg); groups 2, 3, and 4 were treated with the extract at 600, 300, and 150 mg/kg, respectively, while those in group 5 received diazepam at either 0.5 or 1 mg/kg, except in the diazepam-induced sleep experiment. Treatments were via the Intraperitoneal route (i.p) and observation period for recording the behavioural episodes was 30 minutes post treatment in each experiment.

The method was adopted as described by Simiand et al. (15). The staircase is composed of 5 identical steps, 2.5 cm high, 10 cm wide, and 7.5 cm deep. Mice were placed individually on the floor of the box with their back to the staircase. The number of steps climbed and the number of rearing were counted over a 5-minute period.

This method was described by Pellow and File (16). It consists of 2 open arms (35 × 5 cm) crossed with 2 closed arms (35 × 5 × 20 cm) elevated about 25 cm in a dimly illuminated room. Mice were placed individually in the centre of the EPM, facing a closed arm. The time spent in both the open and closed arms were recorded for 5 minutes and the numbers of entries into the open and closed arms were also counted. An entry was regarded as when all 4 paws are within the arm. Increase in the open arm exploration time was regarded as anxiolysis.

This study was described by Sonavane et al. (17). It was conducted using a wooden board measuring 20 cm by 40 cm with 16 evenly spaced holes. Individual mice were placed on the board and allowed to explore, the number of times each mouse dipped its head into the holes to the level of eyes was counted during a 5-minute period. Anxiolytic compounds were considered to increase the number of head dips.

Open Field Test, as described by Kulkarni and Reddy (18), was adopted. It is a floor of half square meter divided to a series of 25 squares, each alternatively coloured black and white with a 40-cm height wall. Numbers of squares travelled, time spent at the central square, and the number of rearing by the animals were counted for 5 minutes. Number of squares travelled, number of rearing, and time spent at the central square were observed and recorded.

This method was carried out as described by Stanley et al. (19). The beam was made of wood 8-mm in diameter, 60 cm long, and elevated 30 cm above the bench by metal supports. Adult mice were trained to walk from a start platform along a ruler (80 cm long and 3 cm wide) elevated 30 cm above the bench by a metal support to a goal box. Each mouse was placed on the beam at one end and allowed to walk to the goal box. Mice that fell were returned to the position they fell from, with a maximum time of 60 seconds allowed on the beam. The indices recorded for each mouse were time spent while crossing the beam and the number of foot slips.

The method was adopted as described by Rakotonirina et al. (20). Mice were divided to 4 groups of 6 mice each and received different treatments. Group 1 were treated with distilled water (10 mL/kg, IP) while groups 2, 3, and 4 were treated with 3 doses of the plant extracts at 600, 300, and 150 mg/kg, respectively. Thirty minutes post treatment, each group received diazepam at a dose of 20 mg/kg (IP) and the sleep potentiating effects of the plant extract was studied. The onset and duration of sleep were recorded. Loss of righting reflex was described as the onset of sleep while the time between the loss and regaining of the righting reflex was regarded as duration of sleep.

The extract showed decrease in the number of head dipping at all doses, which was significant (P < 0.05) at 600 mg/kg; this was also observed with the diazepam-treated group compared to the control group (Table 3).

The extract showed a significant (P < 0.05) increase in the number of foot slips and time spent on beam at 600 mg/kg compared to the control group (Table 5).

The staircase test is a differential test based on the exploratory tendency of mice when exposed to a new environment, and thus describes the level of emotivity in the mice (21). Compounds that reduce rearing activity are said to possess anxiolytic activity (22). The extract suppresses the rearing behaviour significantly and therefore suggests a central anxiolytic effect.

To further ascertain the anxiolytic effect of the extract, elevated plus maze (EPM) test was conducted. The test has been validated as an identifier of novel anxiolytic agents and found sensitive to benzodiazepines (23). In this test, it is assumed that animals felt safe in the closed arms yet exhibited fear and anxiety during exploration of the open arms (24). An anxiolytic agent increases the frequency of entry in the open arms and increases the time spent in open arms (25). The extract significantly increased the number of open arm entry and also time spent in the open arm. This could also be an indication of the anxiolytic effect of the extract, which may be due to an increase in GABAergic neurotransmission.

Open field test is a model for evaluating anxiety and exploration as well as locomotion. Decrease in anxiety leads to increased exploratory behaviour, decreased time spent on the central square, while an increase in anxiety results in less locomotor motion and preference for the edges of the field (28). The axiolytic activity of the extract was also indicated by significant decrease in the number of rearing. However, there was neither a significant increase in the number of squares crossed nor decrease in time spent on the central square.

The mouse beam walking assay was used to evaluate the effect of the extract on motor coordination. It is a more sensitive model in predicting clinical sedation in humans caused by novel drugs (19). The effect of LAME on beam-walking assay of motor coordination deficit showed a significant increase in the number of foot slips and time spent on beam. Therefore, the increase in the number of foot slips could be considered as the peripheral muscle relaxant activity and sedative effect of the plant extract.

In the diazepam-induced sleeping time, diazepam exerts its sedative effect by enhancing GABA inhibitory neurotransmission (29). The extract significantly increased the duration of sleep induced by diazepam, which may therefore contribute to the sleep-inducing property observed. Compounds that decrease the onset of sleep are considered to be beneficial in initiation of sleep, while agents that prolong the duration of sleep may be beneficial in sleep maintenance (20). Available literature reports describe diazepam as anxiolytic at low doses and sedative at high doses (30). It could be observed that anxiolytic activities of LAME were seen at lower doses and the sedative effect were reflected more at the higher doses. Therefore, this could explain the possible relationship between the effects of the extract and diazepam.

The methanol leaf extract of Laggera aurita possesses anxiolytic-like properties comparable to diazepam. This could lend additional credence to the previously reported anticonvulsant activity of the plant extract.

The authors thank the department of pharmacology and therapeutics, Bayero University Kano, for providing all the equipment utilised in this study.