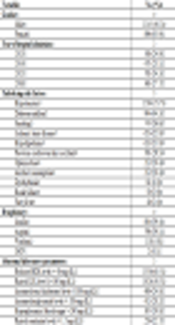 Assessing the prevalence of brain stroke and its clinical patterns across countries and nations could be valuable. It is an important concern for Iran as one of the countries with a high rate of stroke.

The present study was aimed to assess the epidemiological aspects of ischemic brain stroke.

This cross-sectional study was conducted in Loghman-e-Hakim Hospital, Tehran, Iran from January 2013 to December 2016. The data were gathered by retrospectively reviewing the hospital records.

In this study, 2041 cases were admitted that 1145 (56%) cases were male. The mean age of the patients was 66.50 ± 13.49 years. The most common underlying risk factor was hypertension in 73.7% followed by diabetes mellitus in 44.3%. Left carotid stenosis was reported in 17.2% of the cases and right carotid stenosis in 9.5%. Left ventricular ejection fraction < 40% was found in 8.6% of the cases. The most common areas involved in the brain CT scanning were periventricular areas in 20.5%, left middle cerebral artery in 15.4%, and lacunar infarction 8.8% of the cases. In addition, 214 patients died indicating a crude mortality rate of 10.5%.

The prevalence of ischemic brain stroke in males is slightly higher than females and the mean age of the patients was estimated to be 66 years. The most common risk factors are comprised of hypertension, diabetes mellitus, and smoking. Carotid stenosis is evident in more than 25% of the patients, and the mortality rate was 10% in the studied population.

Stroke is the third most common cause of death in developed countries and the most common neurological disease all over the world. The annual incidence of stroke has been estimated to be about 15 million cases that one-third die and one-third suffer from a permanent disability. In total, more than 80% of all stroke-induced deaths in the world occur in developing countries (1-8). Previous studies have shown that the risk of stroke is doubled after the age of 55. It should be also mentioned that developed and developing countries are rapidly moving towards becoming older due to increased community hygiene that requires extensive health care for their elderly population (9-13). Risk factors related to cerebrovascular thrombotic events, such as ischemic stroke, consist of hypertension and diabetes with different patterns in each community based on different cultural characteristics and some other effective factors (14-16). Thus assessing the prevalence of ischemic brain stroke and its clinical patterns is an important concern for Iran as one of the countries with the high rate of ischemic brain stroke.

The present study was aimed to assess the epidemiological aspects of the ischemic brain stroke in one of the main referral hospitals for stroke patients in Tehran, Iran.

This cross-sectional study was conducted in Loghman-e-Hakim Hospital, Tehran, Iran from January 2013 to December 2016. This hospital is one of the main educational hospitals in Tehran affiliated to Shahid Beheshti Medical University (SBMU). Total monthly patients refer to this hospital is approximately 10000 that almost 3000 of them are admitted to the wards. Method of the study was approved by the Ethics Committee of SBMU with the ethic number of IR.SBMU.MSP.REC.1395.225. The information on this study was kept confidential and secured.

All eligible patients older than 18 years with the final diagnosis of ischemic brain stroke were admitted during the study period. Those with other co-existing non-acute neurological diseases or history of traumatic brain injuries were excluded.

The results were presented as mean ± standard deviation (SD) for quantitative variables and were summarized by absolute frequencies and percentages for categorical variables. The normality of data was analyzed using the Kolmogorov-Smirnoff test. Categorical variables were compared using chi-square test or Fisher’s exact test when more than 20% of cells with an expected count of less than 5 were observed. For the statistical analysis, the statistical software SPSS version 16.0 (SPSS Inc., Chicago, IL) was used. The P value of 0.05 or less was considered statistically significant.

Details of the patients’ baseline characteristics were summarized in Table 1. Although the most number of the cases were admitted during the year of 2015, no significant difference was observed compared with the other years (P > 0.05). With respect to laboratory parameters, lipid profile abnormality was the most frequent finding. According to the prescribed medication (drug history), insulin was administered in 39.4% and aspirin in 39.1% of the cases. The most common underlying risk factor was hypertension in 73.7% followed by diabetes mellitus in 44.3% and smoking in 36.6% of the cases. Raised systolic blood pressure (> 140 mmHg) and diastolic blood pressure (> 90 mmHg) was reported in 53.6% and 28.0% of the cases, respectively. The mean left ventricular ejection fraction in echocardiography was 53.2 ± 9.5%; however, lower than 40% was observed only in 8.6% of the cases.

Details of ischemic brain stroke characteristics in the studied patients were summarized in Table 2. The 3 most chief complaints of the patients were weakness (39.3%), paresis (28.3%), and paresthesia (23.2%). In terms of the physical exam, hemiparesis was reported in 60.9% of the cases which was more frequent than the other parameters. Naturally, a significant number of the patients simultaneously had multiple signs or symptoms.

Table 2. Details of the Stroke Characteristics in the Studied Patients (N = 2041)

Details of the involved area on brain imaging related to the studied patients were reported in Table 3. With respect to the brain imaging, whether CT scan or MRI, the most common areas involved in the brain were periventricular areas in 20.5%, left middle cerebral artery (MCA) territory in 15.4%, lacunar in 8.8%, and pons in 7.1% of the cases. Totally, among 851 cases that underwent carotid Doppler ultrasound assessment, left carotid stenosis was revealed in 17.15% and right carotid stenosis in 9.51% of the cases.

Table 3. The Involved Area on Brain Imaging of the Studied Patients

The results of this study indicated that first, the trend of ischemic brain stroke has not significantly changed in recent years in the studied hospital. Second, the frequency of ischemic brain stroke distribution was slightly higher in males than females, but the incidence rate of females is far higher than males. Concerning risk factors associated with ischemic brain stroke, the most common risk factor such as hypertension was observed in about 74% of the patients, followed by other common risk factors, including diabetes mellitus in 44% and smoking in 36.6%. In terms of laboratory findings, lipid profile impairment was also associated with increased low-density lipoprotein (LDL) and reduced high-density lipoprotein (HDL) in these patients. However, left ventricular dysfunction was only apparent in 8.6% of the patients. Also, in carotid Doppler evaluation, left and right carotid stenosis was seen in 15.8% and 8.8%, respectively. Given the results of the present study on the distribution of sex and age of ischemic brain stroke in comparison to the other studies in Iran, we conclude that the occurrence of ischemic brain stroke in Iran in all age groups is slightly higher in females than males in most studies (about 51 to 53% in females) (17, 18), which is slightly contradictory with our study. However, stroke has been higher in young men, especially between the ages of 15 and 45 (19). In our study, the prevalence of stroke was higher in males than females in only 131 cases aged less than 45 years, which is consistent with previous studies. Therefore, it can be concluded that the occurrence of ischemic stroke is most commonly seen in men than women in lower ages, while over the age of 45 years, the results vary in different studies.

Concerning the risk factors associated with ischemic stroke in Iran, almost all of our study results are consistent with previous studies, in which hypertension was a predominant risk factor in most studies. Diabetes and cigarette smoking have also been considered prevalent risk factors in other studies. In a systematic review carried out by Hosseini et al. in 2010 on the studies conducted in Iran, in terms of the distribution of risk factors associated with stroke, hypertension is the most common risk factor for stroke. Cardiovascular disease (54%), especially rheumatic heart disease (34%), was the most common cause of death in stroke in young people (23). In subjects over 35, 20% of the patients with ischemic stroke had a heart origin for embolism, especially rheumatoid mitral stenosis (19). In the study of Talebi et al. in 2014, high blood pressure was reported in 72.3% of females and 59.3% in males, while 28.8% of females and 18.7% of males had diabetes and smoking was reported in 6.3% of females and 35.3% in males (21), which indicated a high prevalence of hypertension along with other risk factors for ischemic stroke. In the study of Sarrafzadegan et al. in 2017, the prevalence of hypertension and hyperglycemia in the stroke group was significantly higher than in the control group (24). In the study by Fahimfar et al. in 2017, among risk factors for stroke, including age over 65, male sex, hypertension, diabetes, and chronic kidney disease (22) three risk factors, including hypertension, diabetes mellitus, and smoking were considered to be major risk factors for ischemic stroke.

As a result of our study, about a quarter of the patients underwent carotid Doppler ultrasound, which one-sided carotid artery stenosis was observed in a small number of the patients. The frequency of carotid stenosis associated with ischemic stroke has been very different in various studies. In the study by Chang et al. in 2002, the prevalence of carotid stenosis was 24.3% (25), in Tan et al. study in Taiwan in 2005, it was 6% (26), and in Fernandes et al. study in 2016 in India was 24% (27). Overall, the incidence of carotid artery stenosis in patients with ischemic stroke appears to be visible in 6% to 24% of the patients and therefore, this finding in these patients will not predominate in the vast majority of the patients.

Finally, the rate of mortality due to ischemic stroke was 10.5% in our study. The 28-day mortality rate for stroke in Iranian studies is estimated to be between 19.2% and 31.5%, which was lower in our study than in other studies. However, a wide range of deaths from stroke is provided in many countries. The mortality rate pointed in African areas was 30% (28), in China ranged from 27.2% to 32.9% (29), in Latin countries ranged from 19.3% to 26.2% (30), and in India ranged from 24.5% to 37.1% (31). This figure equals (17%) in Japan and equals 22% in most developing countries (32). It seems that mortality rates are predominantly influenced by several factors such as the severity and pattern of inter-cerebral involvement, the presence of uncontrolled risk factors, the lifestyle of the patients, their dominant diet, and even genetic factors.

This study was conducted as a single-center survey and could not reflect the epidemiological aspects of stroke in the whole Iranian society. Furthermore, short-term and long-term outcomes of the patients and also in-patient and out-patient therapies would be so important data in such epidemiological studies.

In the final conclusion, according to our study on patients with ischemic brain stroke in selected Iranian society, the prevalence of ischemic stroke in males is slightly higher than females and the mean age of the patients was estimated to be 66 years. The most common risk factors are comprised of hypertension, diabetes mellitus, and smoking. Carotid stenosis is evident in more than 25% of the patients, and the mortality rate was 10% in the studied population.

Copyright © 2019, Archives of Neuroscience. This is an open-access article distributed under the terms of the Creative Commons Attribution-NonCommercial 4.0 International License (http://creativecommons.org/licenses/by-nc/4.0/) which permits copy and redistribute the material just in noncommercial usages, provided the original work is properly cited.
download pdf 117.30 KB Peer Review Comments ( 114.75 KB) Get Permission (article level) Import into EndNote Import into BibTex
Number of Comments: 0