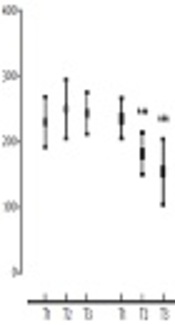 Platelet volume indices (PVIs) are inexpensive and readily available parameters in intensive care units (ICUs). However, their association with mortality has never been investigated in the post-neurosurgical meningitis (PNM).

This study was designed to investigate the association of PVIs with mortality in PNM patients.

This retrospective study was conducted in the adult patients undergone various neurosurgical procedures in a neurosurgery department at a tertiary educational medical center in Tehran from 2016 to 2017. In this study, platelet indices including mean platelet volume (MPV), platelet distribution width (PDW), and platelet count were measured on ICU admission.

A total of 37 patients were included, 18 of whom survived (mortality rate: 50%). PDW and MPV values were significantly higher in non-survivors than in survivors. In non-survivor patients, platelet count was significantly lower and PDW was higher at diagnosis and discharge when compared to on admission. Also, there was no significant linear correlation between Charlson comorbidity index (CCI) and platelet indices. The means of these parameters showed no significant differences in CCI categories between the two patient subgroups.

Post-neurosurgical meningitis (PNM) is a severe complication that leads to high mortality rates, prolonged hospitalization, severe neurologic sequelae, and increased hospital costs. Since the number of high-quality, randomized controlled trials for the management of PNM is limited, the diagnostic and therapeutic approaches are mainly according to low-quality evidence and personal experience (1).

MPV is a machine-calculated item that exhibits plateletcrit to platelet count ratio and is an accurate marker of platelet function. PDW defines the distribution width at the level of 20% in the size of platelet distribution curve that reveals how uniform the platelets are in size in a blood sample (2).

The PVIs are potential platelet activity biomarkers that are suggested to be linked to systemic inflammatory responses (3). Since the measurement of these parameters is inexpensive and easily accessible in many institutions, they can readily provide comprehensive clinical examinations regarding PVI values for prognostic and diagnostic purposes in various settings (4). A reduction in PLT count is an independent risk factor for critically-ill patients admitted to intensive care units (ICUs) (5).

Based on the growing lines of evidence, the above-mentioned parameters are useful in the differential diagnosis of bacterial and tuberculous meningitis (6), defining the severity of illness and predicting the mortality in critically ill-patients (7). These parameters are also individually linked to mortality in unselected ICU patients (4).

Considering the fact that the risk of mortality in patients with PNM is high, risk stratification can help clinicians with the management of these patients. Hence, by establishing a link between PVI and clinical outcome, we would be able to obtain further insight into the common PNM pathways. Therefore, this study was designed to evaluate the association of PVIs with clinical outcomes in PNM patients.

This retrospective study was conducted among patients with confirmed diagnosis of meningitis who underwent various neurosurgical procedures in the department of neurosurgery at a tertiary university medical center, Tehran, Iran from 2016 to 2017. The complete medical history, clinical and biochemical evaluations, and complete blood cell count on the days of admission, diagnosis, and discharge were recorded.

All the statistical analyses were performed using SSPS version 16.0 (SPSS, Inc., Chicago, IL, USA). Chi-square test was employed to analyze categorical data. Independent t-test, paired t-test, multivariate logistic regression, and repeated measures analysis of variance (ANOVA) were run for comparison of numeric values. We calculated Charlson comorbidity index (CCI) (8) and presented the mean ± standard deviation (SD). Also, we used four categories based on CCI that consists of none (0), mild (1 - 2), moderate (3 - 4) and severe (≥ 5). Spearman rank correlation test was carried out to determine the linear relationship between two variables that had no prerequisite for a parametric correlation test. The values for each group are expressed as mean ± SD. P value less than 0.05 was considered statistically significant.

Table 1. Characteristics of the Patients Based on Survival Status

As shown in Table 1, a significant difference was found in the laboratory parameters. Here, platelet count was significantly lower in non-survivors than survivors (P = 0.006) and PDW and MPV were higher in dead patients (P = 0.006 and P = 0.030, respectively). In order to compare PVIs at the times of admission, diagnosis, and discharge, we assessed PVI parameters at different time points in surviving and non-surviving patients.

The difference in platelet count (A) and platelet distribution width (B) between T1 with T2 in the survivor and the non-survivor groups. T1-admission; T2-diagnosis; T3-discharge (P < 0.001)

According to univariate analysis, the platelet indices, sepsis, pneumonia, and ventilation were significantly associated with outcome. Considering the small number of outcome events, we analyzed multivariate regression with some variables and found no significant adjusted odds ratios (Table 2). However, we recommend this analysis with an appropriate event number.

Table 2. The Estimation of Mortality Odds Ratio for Study-Specific Variablesa, b

a Univariate and multivariate logistic regression for eight variables.

Table 3. The Association Between Charlson Comorbidity Index and Platelet Parameters in Non-Survivors and Survivors

In this study, we provide insight into the role of PVIs in the pathophysiology of PNM patients. We found that those PNM patients who died had lower PLT count and higher MPV and PDW levels than those who survived. In addition, we demonstrated that CCIs in non-survivors were higher than in survivors, but there was no significant association between CCI and platelet parameters.

It has been widely accepted that in normal physiological conditions, the number of PLTs in the blood remains in equilibrium due to regular elimination and regeneration mechanisms. Thus, PLT count or its morphology remains relatively constant. However, under pathophysiological conditions, any factor which can prevent the regeneration of PLT can increase the death rate and overcome the capacity of self-regulation. In this condition, both PLT count and morphology can be changed, which can be detected in the results of PLT indices (7). According to the wide range of studies, it has been shown that PLT indices change following trauma, systemic inflammatory reaction syndrome, severe infection, activation of the coagulation system, and thrombotic diseases. Furthermore, the increased levels of MPV and PDW were suggested as the predictors of poor outcomes in a variety of diseases such as sleep apnea syndrome (9), chronic obstructive pulmonary disease (10), myocardial infarction (11), and infection (12).

Our findings are consistent with those of another investigation that reported reduced PLT count and increased MPV and PDW were independent risk factors for mortality even after they were adjusted for other covariates related to clinical variables. In this regard, Zhang et al. (7) demonstrated that patients admitted to ICU with abnormally low PLT count and high levels of MPV and PDW exhibited severe illness and higher risk of mortality in comparison to those with normal PLT indices. They proposed PLT count, MPV, and PDW as independent risk factors for mortality. Moreover, several studies showed that elevated levels of MPV and PDW were linked to increased rate of mortality in cardiovascular diseases patients (13, 14). Also, another study showed that in sepsis or septic shock patients, hospital mortality was negatively correlated with PLT and PCT values and positively correlated with MPV and PDW values (15). In addition, Camara-Lemarroy et al. demonstrated that platelet count was lower and MPV was higher in patients with bacterial meningitis compared to those with tuberculosis (6).

The inflammatory response can be a feasible explanation for the observed association between platelet indices and mortality rate. According to the growing body of evidence, inflammatory response is remarkably related to undesirable clinical outcomes in ICU patients. The level of inflammation in critically-ill patients can be identified by several biomarkers such as C-reactive protein, which is a prominent inflammatory biomarker significantly correlated with mortality in various conditions (14, 16-18). Reduction in PLT has been proved to be one of the independent risk factors for ICU patients (7).

It is worth noting that the current study had several limitations. Here, due to specified inclusion and exclusion criteria, a number of patients were excluded that inevitably resulted in limited sample size. Also, the obtained results revealed a relationship between low platelet count and mortality; however, a causal relationship between them cannot be inferred based on the present study.

In summary, PLT indices are valuable indicators of clinical outcomes. Non-surviving PNM patients had lower platelet counts and higher MPV and PDW values than survivors. Despite the higher CCIs in non-survivors, there was no significant association between CCI and platelet parameters.

The authors would like to thank the Clinical Research Development Unit (CRDU) of Loghman Hakim Hospital, Shahid Beheshti University of Medical Sciences, Tehran, Iran for their support, cooperation and assistance throughout the period of study.

Copyright © 2019, Archives of Neuroscience. This is an open-access article distributed under the terms of the Creative Commons Attribution-NonCommercial 4.0 International License (http://creativecommons.org/licenses/by-nc/4.0/) which permits copy and redistribute the material just in noncommercial usages, provided the original work is properly cited.
2019-02-19 09:49:07
The Article has beeen well writen