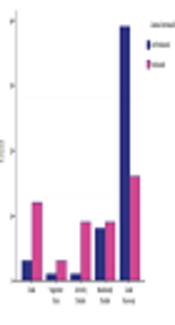 Several clinical conditions and factors have been proposed as the outcome predictors in patients with subarachnoid hemorrhage (SAH) following ruptured intracranial aneurysms. The impact of the intraventricular hemorrhage (IVH), which is commonly observed in the anterior communicating artery (ACoA) aneurysm, has not been discussed in detail.

The purpose of the study was to compare the outcome of early and delayed aneurysm surgery in patients with SAH regarding the presence of IVH.

The study included consecutive ACoA aneurysm patients presenting with subarachnoid hemorrhage, who received microsurgical aneurysm clipping. The medical records of the patients were reviewed retrospectively. As the outcome, the Glasgow outcome score was compared between the two groups of the patients, regarding the presence or absence of the IVH.

In patients with SAH having aneurysms located in the ACoA associated with the third ventricular hemorrhage, delayed surgery might be considered in achieving a better outcome.

A ruptured intracranial aneurysm is the leading cause of non-traumatic subarachnoid hemorrhage (1-3). Brain computed tomography scan (CT scan) is routinely utilized in diagnosing and evaluating the subarachnoid hemorrhage (SAH), which is occasionally complicated with intraventricular hemorrhage (IVH), hydrocephalus, intracerebral hemorrhage, or infarcts (4, 5). The ruptured anterior communicating artery (ACoA) aneurysms are frequently accompanied by the IVH, owing to the anatomical proximity to the lamina terminalis (LT) and the third ventricle (6, 7).

The early microsurgical treatment of the ruptured aneurysm is usually advised to minimize the risk of complications related to rebreeding (8). However, the strategy of the early surgery could not be applied to all the patients because surgical planning might be complicated by several clinical conditions, which are proposed as the outcome predictors in aneurysm surgery (9). Identifying these factors and conditions may influence the outcome of the patients and facilitate decision-making. Although the IVH is frequently observed in ruptured ACoA aneurysms (10), its impact on the outcome of the micro-surgically treated patients has not been discussed in detail.

A series of consecutive ACoA aneurysm patients presenting with subarachnoid hemorrhage to receive craniotomy and aneurysm clipping as the treatment by a single neurosurgeon were enrolled in a retrospective study. For comparison, the patients were divided into two groups of perforated lamina terminalis (PLT) and unperforated lamina terminalis (UPLT), based on the presence of blood in the third ventricle in the brain CT scan that was obtained on admission. Regarding the timing of the surgical intervention after ictus of aneurysmal bleeding, three surgical groups were defined: Early surgery (operated within three days), intermediate surgery (operated within 4 - 14 days), delayed surgery (operated ≥ 15 days).

All the data including demographics, SAH grading, time of surgery, surgical complications, and the length of hospital stay were obtained and compared between the two groups.

As the outcome and long-term follow-up, the patients in both study groups were re-assessed at discharge and follow-ups on 3, 6, 12 months after the surgery. The outcome was defined according to the Glasgow outcome score (GOS) as good recovery (score 5), moderate disability (score 4), severe disability (score 3), vegetative state (score 2), and death (score 1).

101 patients (55 males, 46 females) were enrolled in the study. Based on the initial CT scan on admission, 52 patients (mean age 49 ± 10.7 years) had only SAH without any signs of IVH. The third ventricle hemorrhage was present in 49 patients (mean age 52 ± 11.1 years), which was assumed as passing the blood from the subarachnoid space to the third ventricle through the lamina terminalis. The patients with IVH were assigned to the perforated lamina terminalis (PLT) group, and the patients without any signs of IVH were assigned as unperforated lamina terminalis (UPLT) group. The other data gathered included age, sex, underlying disease, smoking status, Hunt and Hess (H&H) grading, the time of surgery, hospital stay, and follow-up time. There were no statistically significant differences in these parameters between the two groups. Table 1 presents the demographic data of the patients.

aValues are expressed as means ± SD or numbers.

25 patients underwent early surgery (1 - 3 days after SAH). 45 surgeries were operated in the late first week or the second week, and only 32 patients underwent surgery in the third week after the presentation of the symptoms. There was no significant difference in the time of surgery and mortality between the two groups (P = 0.2). However, in the PLT group, we found a significant difference in the surgical outcome between early, intermediate, and delayed surgery subgroups (P value < 0.05, Figure 1). Figure 1. Comparison of GOS between the two groups of patients

28 patients experienced some complications related to the aneurysmal bleeding. One patient in the UPLT group and two patients in the PLT group had aneurysmal re-bleeding prior to the surgical treatment. Seven patients (one of the UPLT and six of the PLT group) deteriorated due to hydrocephalus that was managed with CSF diversion procedures. Eighteen patients (5 of the UPLT and 13 of the PLT group) experienced clinical vasospasm, requiring aggressive medical treatment. However, 73 patients had none of these complications. Figure 4. Comparison of the time of surgery in the PLT group

Many aspects of the aneurysm surgery including the timing of the surgery and outcome predictors are still controversial (11). The authors have different trends to advocate either early or late surgery due to the risk of vasospasm and surgical complications. Moreover, the prognostic factors and predictive clinical conditions of the surgical outcome in the aneurysm surgery are also controversial (12, 13). Grading of the SAH, changes in the blood pressure, electrocardiogram, hyponatremia, haptoglobin genotype, neuropeptides, and several biomarkers have been proposed and assessed to predict the risk of vasospasm and outcome after the SAH or aneurysm surgery (14-17).

No consensus exists regarding the timing for the surgical treatment of the ruptured intracranial aneurysms. Ross et al. (18) prospectively investigated 1168 patients that were divided into three groups based on the time of the surgical intervention. Their results indicated that the only independent variables affecting the outcome were age and clinical grading at presentation, and they concluded that the time of surgery did not significantly affect the surgical outcome. Similar results have been achieved by some other authors regarding the time of surgery (19, 20). Conversely, other researchers concluded that the outcome is unsatisfactory when the surgery is done during the intermediate period of the event, owing to the increased risk of the vasospasm (21, 22).

The risk of vasospasm and its related morbidities in aneurysm surgery during the intermediate phase (days 4 - 15) is obvious (23). Several clinical conditions and factors have been investigated in the pathophysiological study of the vasospasm (24). An important clinical condition, which is commonly observed in the ruptured ACoA aneurysm, is the presence of the blood in the ventricular cavity. Although 53% of the ruptured ACoA aneurysms are accompanied by IVH (25), its effect on surgical outcome and its relationship with the timing of the surgery have not been discussed in detail.

Although the early surgery is not agreed by all, it has been recommended by many authors in the previous related studies (26, 27). A better surgical outcome decreases the fatal re-bleeding rate, and hospital stay has been stated as the benefits of the early surgery (18, 28). We also agree with the early aneurysm clipping as the main strategy in the treatment of uncomplicated cases. Nevertheless, in some cases, more considerations may be needed.

In our experience with the microsurgical treatment of the ruptured ACoA aneurysm, the presence of IVH was a significant negative outcome indicator. The patients with ruptured ACoA aneurysm, whose initial CT scans had been accompanied by the IVH, had overall a worse surgical outcome compared to the patients without IVH. Nevertheless, with respect to the time of the surgery, the surgical outcome was more satisfactory in patients that received delayed microsurgical treatment when IVH had been observed on the initial CT scan.

The exact pathophysiology leading to a worse outcome in patients with the IVH is still unclear. We speculate this must be attributed to brain natriuretic peptide (BNP) hypersecretion due to direct damage to the hypothalamus by the passing blood to the third ventricle through the ruptured lamina terminalis. BNP is considered an important cause of development of the cerebral vasospasm in SAH. Sviri et al. (29) studied the relationship of BNP with post cerebral vasospasm and found a strong correlation between BNP and vasospasm. They demonstrated that the BNP level significantly increased in patients with IVH due to ACoA involvement. They assumed that close anatomical proximity of the hypothalamic perforating vessels to the ACoA complex increased the risk of hypothalamic damage to the ruptured ACoA aneurysm and a higher chance of alterations in the secretion level of BNP (30).

Although the detailed molecular pathophysiology of the involved mechanism needs further investigations, our results indicated that the outcome was significantly better in patients who had received a delayed microsurgical treatment when ruptured ACoA was accompanied by the IVH. Based on our study, it could be assumed that the leakage of the blood into the third ventricle in the ruptured ACoA exposed the patients to the higher risk of surgical morbidities. Therefore, delayed surgery might be more effective in the group of patients with ACoA aneurysm.

In patients with SAH having aneurysms located in the ACoA that caused lamina terminalis damage associated with the third ventricular hemorrhage, delayed surgery was significantly associated with better outcome.

Copyright © 2019, Archives of Neuroscience. This is an open-access article distributed under the terms of the Creative Commons Attribution-NonCommercial 4.0 International License (http://creativecommons.org/licenses/by-nc/4.0/) which permits copy and redistribute the material just in noncommercial usages, provided the original work is properly cited.
COMMENTS