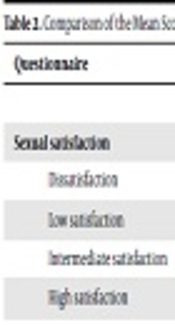 Couples experiencing spinal cord injury (SCI) usually deal with altered sexual lives. Evaluation of the sexual satisfaction, intimacy, and partnership as well as sexual functioning of the couples with one SCI-affected partner is necessary.

The current cross sectional study was conducted on 28 couples (56 individuals) attending a sexual health clinic at the Brain and Spinal Cord Injury Research Center (BASIR) affiliated to Tehran University of Medical Sciences, Tehran, Iran. Descriptive statistics were employed and data were expressed as frequencies. The chi-square test, the Pearson and Spearman correlation coefficients, and the Student t-test were employed to determine the differences between male and female subjects with SCI as well as their partners. To investigate marital-related outcomes, ENRICH marital satisfaction scale, marital adjustment scale, and the Bagarozzi intimacy questionnaire were used. In addition, female sexual function index (FSFI) and international index erectile function (IIEF), as well as sexual knowledge and attitude, sexual expression (SE), and the Larson sexual satisfaction questionnaires were employed to evaluate sexual-performance-related outcomes.

The mean age of male and female subjects with SCI (20 males and eight females) was 39.65 ± 9.483 and 34.88 ± 10.412 years, respectively. Mean age of the partners without SCI, male and female, was 37 ± 9.067 and 41.38 ± 10.155 years, respectively. Partners with and without SCI had low sexual satisfaction by 67.9% and 53.6%, respectively. There was also a poor intimacy and partnership in partners with SCI (46.4%). Gender-based differences in the couples' sexual functioning indicated that females without SCI showed lower scores in sexual functioning than their male counterparts. All female subjects got lower scores in FSFI. A significant mean difference was observed between the SCI and non-SCI groups in ENRICH marital satisfaction (P < 0.02), the Bagarozzi intimacy (P < 0.035), marital adjustment (P = 0.000), and IIEF (P < 0.001).

Based on the current study findings, sexuality of people with SCI was far more complex than those of their healthy counterparts, which caused the health providers face with clinical, social, and cultural challenges. Sexual rehabilitation should be effusively addressed in all spinal units and recovery centers, along with other aspects of treatment and rehabilitation.

Sexuality is important to people with spinal cord injury (SCI), regardless of their disabilities (1). Studies point out that couples with SCI are often sexually overlooked in rehabilitation centers (2-5). Annually, 20 - 50 per million individuals experience SCI worldwide, but in Iran this rate is higher (40 - 50/million); in other words, more than 3000 people experience SCI every year (6).

All personal aspects including psychological and emotional, as well as sexuality and the sensation of genital organs are seriously affected by SCI. This causes sexual dissatisfaction resulting in lower quality of life and social functioning in patients with SCI (7). No doubt that sexual activity, mobility, and satisfaction are adversely changed after SCI (7, 8). The availability of sexual partner, alteration of their sexual interests, and the changes they experience through their intimate relationships crucially affect couples' sexual satisfaction (9-12).

The current study aimed at examining sexual satisfaction, intimacy, partnership, and the sexual functioning of the couples with one injured partner referring to a sexual health clinic in Tehran, Iran.

The study was conducted in Family and Sexual Health Division in BASIR, Neurosciences Institute affiliated to Tehran University of Medical Sciences from July 2017 to June 2018. Convenience sampling method was employed and 28 couples with one SCI-affected partner referring to BASIR Center in Imam Khomeini Hospital Complex of Tehran were recruited.

Couples were eligible to participate in the study if: they were > 18 years old, had incomplete or complete SCI for more than a year; had no history of chronic psychological and physical illnesses other than SCI; not referred to psychiatric clinics over the past six months; had no history of substance abuse, disorders, or physical aggression; had interest in attending medical sessions; were married at least one year before the occurrence of SCI, and did not attend the couples’ educational programs before the study.

Sexual expression (SE) is a five-item questionnaire scored based on a five-point Likert scale from 1 to 5 and measures sexual expression of the couples with each other. Its IC was 0.77 based on Cronbach's alpha coefficient (16).

The Bagarozzi intimacy (BI) questionnaire assesses the intimate emotional, psychological, rational, sexual, physical, spiritual, aesthetic, and sociopsychological aspects. It has 41 items, which are scored based on a 10-point Likert scale from 1 (there is no need at all) to 10 (there is a huge need). The reliability of the questionnaire was 0.94 based on Cronbach’s alpha (17, 18).

Marital adjustment (MA) questionnaire contains 32 items and addresses the quality of marital relationship. The total reliability of the scale was 96%, reported by Cronbach's alpha, which had a significant IC. In a study conducted in Iran, researchers achieved a high IC (95%) throughout the questionnaire (20).

Female sexual function index (FSFI) has six domains of desire, arousal, lubrication, orgasm, satisfaction, and pain in a total of 19 items that are scored based on a six-point Likert scale from 0 to 5. The Cronbach’s alpha value of the FSFI was 0.82 and even higher (21).

International index erectile function (IIEF) has five areas of erectile function, orgasm, sexual desire, satisfaction with intercourse, and overall satisfaction in a total of 15 items scored based on a six-point Likert scale from 0 to 5. The total Cronbach’s alpha for the IIEF was 0.91 and higher (22).

Since, to the authors’ best knowledge, there was no similar study on couples with SCI, and based on studies conducted on healthy couples and measuring similar variables (23), and using the proper formula, the minimum number of samples required in each group was 13. With the probability of a 10% dropouts in response rate, confidence interval (CI) of 95%, and power of 90%, the sample size was determined 28 couples.

Chi-square test, the Pearson and Spearman correlation coefficients, and the Student t-test were employed to analyze the data with SPSS version 21.

All participants were informed about the research objectives by a trained research assistant. The participants were assured about the confidentiality of their information, and verbal and written informed consent was obtained from them. The current study protocol was approved by the Ethics Committee of Tehran University of Medical Sciences (ethical code: IR.TUMS.REC.1394.1963).

The couples with one SCI-affected partner (20 males, eight females) were enrolled into the study. Table 1 shows the demographic characteristics of the subjects in SCI and non-SCI groups. The participants were in their middle ages. Length of marriage (LOM) was not long. Living with SCI in the SCI group was not longer than 4 - 5 years.

Table 1. The Baseline Characteristics of Male and Female Subjects with and Without SCIa

Table 2. Comparison of the Mean Scores of the Questionnaires Between the SCI and Non-SCI Groupsa

Table 3. Comparison of the Mean Scores of the Questionnaires Between the SCI and Non-SCI Groups

Table 4. The Correlation of Sociodemographic Characteristics with Questionnaires Scores

The current study compared sexual satisfaction, intimacy, and partnership with sexual functioning of the couples with one SCI-affected partner referring to a sexual health clinic.

The correlation between sexuality and body wellness is documented worldwide. SCI has a significant impact on individuals` sexuality due to the personal feeling of his/her own sexual capability (1, 3, 24), as well as the social labeling of individuals with any form of disability, which may be considered to be synonymous with asexuality (3-5, 25). People with SCI have problems with their marital longevity and each partner has his/her own concern with threatened intimate relationship (4, 5).

Participants in the current study, both genders, got lower scores in SS, although the difference between the study groups was insignificant. There was a significant difference in the means of intimacy and partnership between the groups (P < 0.035); in male sexual functioning (P > 0.001) the difference was significant between the SCI and non-SCI groups. Similarly, there are a vast number of reports pointing out significant changes in sexual life of people with SCI, among the married couples in particular (26, 27). Kreuter argued that intimate partner relationship is adversely affected by SCI, which places the marital relationship at a higher risk of divorce and conflict (26).

Although the current study subjects showed low scores in most aspects of marital interactions, the partners with SCI were significantly different from the ones without SCI in EMS, MA, and BI. Similar to the current study subjects, other people with SCI in the studies worldwide also got lower scores in sexual activity and reported lower satisfaction compared with those of their control groups (2, 5, 28). McCabe and Taleporos reported that people with physical impairment experience lower levels of sexual self-esteem, sexual confidence, poor quality of sexual life, and significantly higher levels of sexual depression (29).

The current study also evaluated the differences between male and female subjects identified as the well partners. Regardless of their wellness, both male and female subjects with a SCI-affected spouse also got lower scores in SS. There is no question that partners of SCI-affected individuals consciously or unconsciously alter their tasks in the course of intimate partnership (3, 4, 25). Reports show that female subjects involved in a partnership after SCI do not consider themselves as a spouse, but more as a caregiver than being a wife or sexual partner (4, 5, 30), and some others believe that after the injury the partner change and is not as she used to be (30).

This alteration is highlighted through the societies in which well body is the essential factor in a successful sexual interaction (29)and the Iranian culture is not an exception (31). Merghati Khoei, an Iranian sexologist, pointed out in a study that marital and sexual life is socially scripted based on the gender-related folk theories. Masculinity means a well body and sexual potency, and femininity means reproduction and child bearing ability (32). She argued that these constructions are jeopardized with any form of disability, SCI in particular (33).

Interestingly, the current study found no significant differences (P > 0.05) in sexual functioning of females with or without SCI, although they reported lower scores of FSFI. It was argued that wives sacrificed their lives as soon as their husbands become injured and not capable to perform sexual intercourse. Their roles change to be a caregiver instead of being intimate sexual lover. In other words, they deny their sexual rights and interests through post-SCI-life (4, 30). Burden of caregiving is clearly shown in couples with one SCI-affected partner; consequences including diminished welfare, increased stress, tiredness, anger, depression, and denying their personal health needs and complications (5, 34).

Sexual relationship power is always male-dominated in some societies (7, 35). This ring of power suffers if a male loses his sexual ability, no matter if his partner is still sexually active (35). Small sample size can be the further explanation of this finding.

In conclusion, sexuality of people with SCI is far more complex and faces clinical, social, and cultural challenges. Post-SCI sexual life extensively changes. The couples' sexual needs vary compared with their well body counterparts. This means that all the considered conditions and situations should be effusively addressed in all spinal units and recovery centers, along with other aspects of treatment and rehabilitation.

The authors wish to thank all the study participants. They are also thankful to the research assistance.

Copyright © 2019, Archives of Neuroscience. This is an open-access article distributed under the terms of the Creative Commons Attribution-NonCommercial 4.0 International License (http://creativecommons.org/licenses/by-nc/4.0/) which permits copy and redistribute the material just in noncommercial usages, provided the original work is properly cited.
download pdf 126.58 KB Peer Review Comments ( 107.63 KB) Get Permission (article level) Import into EndNote Import into BibTex
Number of Comments: 0