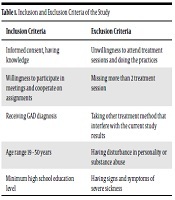 Although anxiety is an important mediator of generalized anxiety disorder (GAD), there is inadequate evidence to treat people particularly for anxiety symptoms that improve the state of health in people with GAD.

The present study with pretest and posttest design and experimental and control groups was conducted on patients with GAD in Shiraz, Iran. According to the tendency of the participants, structured diagnostic interview, and inclusion criteria, 20 patients were randomly selected for the treatment group and 20 subjects with GAD for the waitlist control group. Participants were given competitive memory training (COMET) for GAD in four sessions.

The current study findings showed that COMET decreased the rate of worry and anxiety.

The current study illustrated that the COMET protocol for GAD might have a positive effect on worry and anxiety.

Generalized anxiety disorder (GAD) is a disorder described by excessive anxiety and worry that takes at least six months; patients complain of a lot of unpleasant mental state characterized by thinking about events or activities (1, 2). Moreover, the anxiety and worry should clinically bring about a significant degree of physical or mental impairment and patients with this disorder and this disturbance is not better explained by another mental disorder (3). Inquiries point out a large number of comorbidities between GAD and major depression, and also GAD and other anxiety disorders (4). Worry and excessive anxiety play an important role in cognitive behavioral treatments for GAD (5, 6).

Lately, various studied treatments declared that competitive memory training (COMET) was fortunate in treating various disorders in various populations. Therefore, COMET is a helpful treatment method known as a transdiagnostic intervention. COMET protocols are used basis on the Brewin theory about competitive memory retrieval hierarchies (7). COMET aims to modify the valence of activated memory representations (8). According to theoretical protocol, the aim of COMET is to manufacture preferential recall of positive material from memory by: (a) recognizing information about meanings that are operating abnormally, and are also high in the retrieval hierarchy; (b) distinguishing more functional alternatives that are low in the hierarchy; and (c) concentrating on forming positive representation more easily retrievable by up surging activation frequency and rising emotional salience (9, 10).

In recent years, extensive studies revealed the higher level of anxiety and worry among patients with GAD than the ones with other disorders. COMET is one of the treatments with clear impacts on worry (11), obsessive-compulsive disorder (12), low self-esteem and anxiety (13), eating disorder (14), depression, and rumination (8). Studies show evidence for COMET in anxiety spectrum disorders and that COMET in GAD needs to be investigated more. Hitchcock et al. (15), suggested that researchers should perform COMET in people with GAD, due to the lack of studies in this area. Also, in a systematic review they showed that COMET protocol has efficacy in training for the treatment of anxiety and stress-related disorders, but it is not specifically focused on GAD.

It is quite essential to assess the vulnerabilities using prospective programs, psychometric tools, and a sample of people in order to build a systematic scientific basis of etiology and development of GAD to inform people and empirically employ supported and preventive interventions. There is also a growing scientific consensus to show the importance of focusing on early diagnosis and treatment. Therefore, it was decided to study this gap. Since no study uniquely investigated COMET in people with GAD and worry and anxiety.

The current study aimed at investigating the impact of COMET on worry and anxiety in patients with GAD.

Anxiety and related intervention is investigated in several cities in Iran, but not COMET in GAD. The study population included all people with GAD referring to all clinics in Shiraz, Iran, from 2018 to 2019.

The sample size was determined based on a pilot study, indicating a sample size of 20 for each group (16). Then, the inclusion and exclusion criteria were determined (Table 1) and evaluated using clinical interviews and diagnostic and statistical manual of mental disorders (DSM-V) criteria.

Table 1. Inclusion and Exclusion Criteria of the Study

The current experimental study was conducted with pretest-posttest design and waitlist group.

According to the tendency of the participants, structured diagnostic interview, and inclusion criteria, 20 people with GAD were randomly sorted out for the treatment category and 20 people with GAD for the waitlist control group. Participants were given COMET for GAD in four sessions.

According to this design, clinical psychologists consider behavioral changes of patients. This sample size was carefully selected among people with GAD referring to a psychological clinic in Shiraz to receive treatment.

During the pretest and posttest, GAD and the Penn state worry questionnaires were utilized.

The generalized anxiety disorder seven-item (GAD-7) questionnaire is a question sheet that provides details about anxiety in order to determine health status of the individual during the last two weeks. The GAD-7 was developed by Spitzer et al. (1). It determines the level of anxiety that people with GAD usually experience such as neural impression that affects about the individual in various events and situations, even when feel relaxed. GAD-7 has good internal consistency (Cronbach’s alpha: 0.79 - 0.91) (1). Its cutoff point is 10 (1). There was a significant correlation between GAD-7 and state-trait anxiety questionnaire scores and SF-36 indicating high validity of the Persian version of GAD-7 (17). Results of the current study (17) showed that the Persian version of GAD-7 has good psychometrics particularity in measuring student's generalized anxiety.

The PSWQ (18) is a questionnaire with 16 parts used to figure out worry in various events. The cutoff point of PSWQ is 45. The PSWQ is used to estimate the degree of worry in different situations (18). Validity and reliability of PSWQ are 0.95 and 0.87, respectively (18).

The internal consistency of the Persian version of PSWQ was good and test-retest method also confirmed it in the present study (with one-month interval) (19). In addition, high validity of PSWQ was resulted from the significant correlation between PSWQ scores and anxiety and depression scores (19). Results of the current study (19) showed that the Persian version of PSWQ has good psychometrics particularity in measuring student’s worry.

The competitive memory training was performed in the current study according to the protocol described by Korrelboom et al., with some modifications (11); the protocol was used for the first time in Iran for GAD in current study. The COMET protocol includes four main steps presented in Table 2.

COMET treatment is displayed in Table 3.

As presented in Table 4, the means of anxiety and worry decreased from pretest to posttest.

In the current study, groups were analyzed using MANCOVA. Prior to data analysis, pre-assumptions about the model were made. According to Box’s M test results (Table 5), the null hypothesis of homogeneity of variances in the two groups for variables was confirmed. The variances of experimental and control groups were tantamount and no significant difference was observed. Levene’s test results were confirmed using MANCOVA (Table 6).

According to Table 7, the results of analyses showed that multivariate effect of groups (experimental and control) was significant in worry and anxiety (partial eta squared: 0.947; P < 0.001; F = 668.749).

Table 8 shows the result of analysis for effectiveness of COMET in anxiety and worry among patients with GAD.

Table 8. The Results of MANCOVA

Based on the significant difference between the two groups and information shown in Table 8, the mean score of experimental group was higher than that of the control group in the posttest. It can be concluded that the COMET was effective in reducing anxiety and worry.

Since worry and anxiety are an important tuning point in the manifestation and in addition these risk factors play an important role in some emotional disorders (e. g. GAD) as regard reduce these factors are hard, therefore attention to knowing about appropriate method can be help patients. COMET might be a proper method to treat GAD.

Many other studies also support the use of COMET for patients with GAD. COMET was developed to relieve anxiety in people with GAD (11). The current study results indicated the COMET effectiveness in reducing anxiety and worry. Studies show that the COMET protocol can be utilized for other disorders; e g, in eating disorder (14), personality disorders (10), depression and rumination (8), obsessive-compulsive disorder (12), low self-esteem, and anxiety (13). Only one study in Dutch language utilized COMET for patients with GAD (20).

COMET-GAD was a modern intervention based on coping with GAD in comparison with waitlist control group. Evaluation of the different COMET groups showed that patients found it very useful in the circle of problem solving, as well as learning useful theme was more helpful compared without adequate themes for solving problem.

The COMET was more helpful compared with the release and acceptance technique. COMET for GAD concentrates on the relative activation of positive and functional people. This method is applied to reduce the consequences of worry by encountering memories. People with GAD encounter memories with no attempt to shift the processing mode, but it is ideal for reforming the ways of thinking. Imagery of emotionally-salient autobiographical memories plays an important role and concentrates on making a strong path through mental exercises.

Ability for imagination may improve anxiety and worry treatment (20).

As mentioned earlier, the current study had some limitations. Due to high comorbidity between GAD and other disorders, exploring people with only GAD was difficult. Also, similar studies should be conducted on specific types of GAD in samples selected from different cities of Iran. The other limitation might be the interference of the Hawthorne effect, i e, both therapists and patients might have performed better than usual, since they were part of a new experimental treatment and this fact might have led to the positive outcome. Although this cannot be completely ruled out, the intervention group already knew that they were to receive the new experimental intervention.

The authors wish to thank all the study participants.